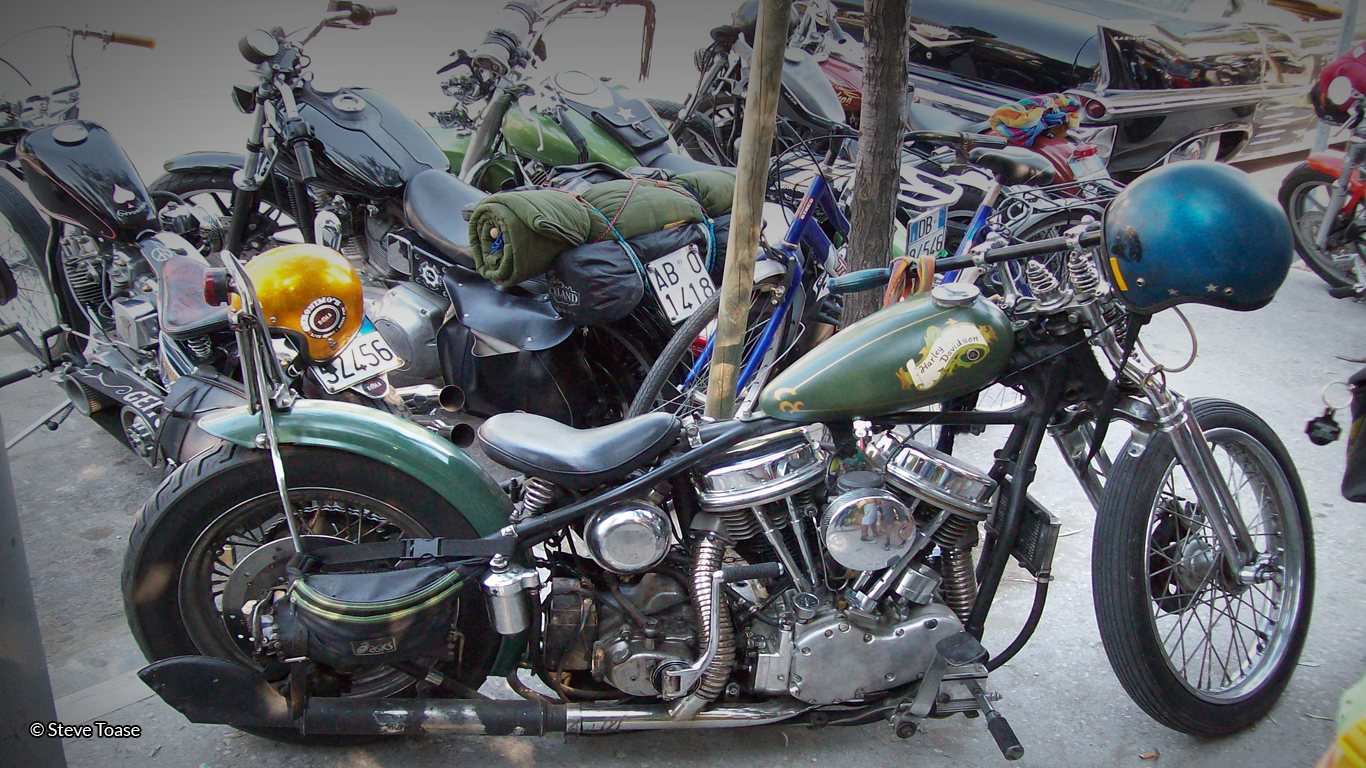 Cars and motorbikes have been with us for over 130 years. In that time they’ve gathered superstitions and urban legends around them like exhaust fumes. Some are part of a continuation going back to when stagecoaches were pulled by horses, and buggy whip salesmen were a going concern. Others, superstitions developed in the 20th century and still persist to this day.

One of the iconic roles of cars in folklore is as a setting for urban legends, for example the Vanishing Hitchhiker. Although the story’s roots are in the pre-mechanized era, it really comes into its own in the age of the car. There are variations, but the core of the tale is always the same. A lone driver picks up a hitch-hiker on a deserted length of road. The taciturn hitch-hiker gives an address, yet when the driver arrives, his passenger has vanished. When he knocks on the door the person who answers sighs and tells them that the hitch-hiker was their daughter/son who was killed in a road accident a year before. In some versions, the driver returns an item of clothing, or finds a jacket he has loaned to the hitch-hiker draped over a grave in a nearby cemetery.

This is not the only story where the solo traveller encounters the supernatural. Other tales feature drivers finding hooks left on car door-handles, or a murder kit left in a boot (I was personally told this one as truth as recently as five years ago). What seems to unite them is an anxiety about the vulnerability of being alone in a vehicle, particularly while driving through isolated areas.

New versions have emerged in recent decades, including drivers getting lured out of their cars by children’s car-seats by the roadside, or the very urban legend of gangs driving around with headlights off with the intention to kill the first civic-minded citizen who flashed their own lights to point out the mistake.

These new legends express a concern about the interaction between the dangerous outside, and the safety inside the vehicle. The metal skin of the car is a threshold beyond which there is chaos. In other settings it is the car itself which is the zone of danger. The archetype of cursed car is Stephen King’s Christine, but the idea pervades automotive history.

On June 28th, 1914, Archduke Franz Ferdinand was assassinated in Sarajevo, the touch-paper that ignited one of the most devastating conflicts the world has ever seen. Maybe because of the resulting war, or the unlikely events that led to his death, the car itself gained a reputation for being cursed.

A Double Phaeton, a limousine manufactured by Gräf and Stift, was associated with a series of tragic events. These events include the death of a Dr. Srikis, as well as a Swiss race driver killed with a broken neck, and Tiber Hirschfield who, along with four wedding guests, was killed in a head on collision. Mike Dash, writing at Smithsonian.com, dates the first appearance of these curse stories to no earlier than 1959. He does note, however, the strange coincidence that the numberplate A II 1118 can be read as A for Armistice, and the date 11,11,18 (11th November 1918), the day the war ended.

James Dean’s Porsche Spyder, Little Bastard, acquired a similar reputation following his death in 1955. Apparently Dean was told by Alec Guinness that the car had a sinister appearance, and if he got in it the young actor would be dead within the week. Dean was killed in a crash at the junction of Californian State Route 46 and Route 41. Following this tragic event, the sports car was linked to a series of unfortunate accidents. In the first story, the car rolled off a flatbed to break the leg of customizer, George Barris. Parts of Little Bastard were supposedly sold to Troy McHenry and William Eschrid, who raced the cars against each other. During the race, McHenry was killed and Eschrid was seriously injured.

In another incident, two tyres from Dean’s 550 Spyder were fitted onto another car and the tyres ended up blowing out, forcing the vehicle off the road. One final story again involved George Barris, who still owned the rest of the Spyder. Some would-be thieves injured themselves while trying to steal the Porsche from Barris. However many of these events actually happened, the car now has a reputation for bad luck to rival the Gräf and Stift.

This echoes the urban legend of the ‘death car’, mentioned by Jan Harold Brunvand in his book, The Vanishing Hitchhiker. In this story a luxury car is available for a knock-down price and it still doesn’t sell. When someone enquires the reason why, they find out that a dead body had been discovered inside. Any time that money has changed hands, the car has been returned to the dealers with a demand for a refund. The new owner is unable to live with a ghostly presence or the stench of death.

Other folklore surrounding vehicles is more personal; rituals to bring good fortune or show respect. An example of this is car-coining, a tradition in New Jersey and New York where coins are thrown onto the floor of a new car for good luck. It’s suggested that this may echo back to the time of toll roads.

A ritual that started in the USA is now gaining global recognition; the use of motorbike bells. These are small silver ornaments (which must be gifted) attached to motorbike frames. One of the origin stories centres around a biker crashing in the desert. Upon waking he sees gremlins dancing over his bike and finds that a small bell in his luggage makes them retreat with their ears covered.

Another biker tradition that has gained traction over the last few years is the practice of putting pillion footpegs down when riding in funerals so the dead can ride on the bike.

The most enduring biker superstition is that a green motorbike is unlucky. Although this can be seen throughout automotive history (with various origins claimed, including maritime folklore, boardtrack racing, and conflict superstitions), this belief has had a major impact on motorbikes today.

A colour normally avoided due to the bad luck connotations, this was a deliberate decision by Kawasaki. By choosing green the Japanese company were saying to the wider industry that they would not be held back by conventional thinking, an attitude that sits at the heart of the company’s personal folklore. Green is the colour of Kawasaki’s motorcycle race teams to this day.

Folklore flourishes around everyday routines. For just over a century the internal combustion engine has been a daily part of our lives. Often vehicles have been dangerous. Sometimes they have been sanctuary. Over the years a very distinctive body of stories has developed around them. As the way we travel changes, with driverless cars become a more familiar sight our roads, our vehicles will continue to gift us new urban legends and rituals.