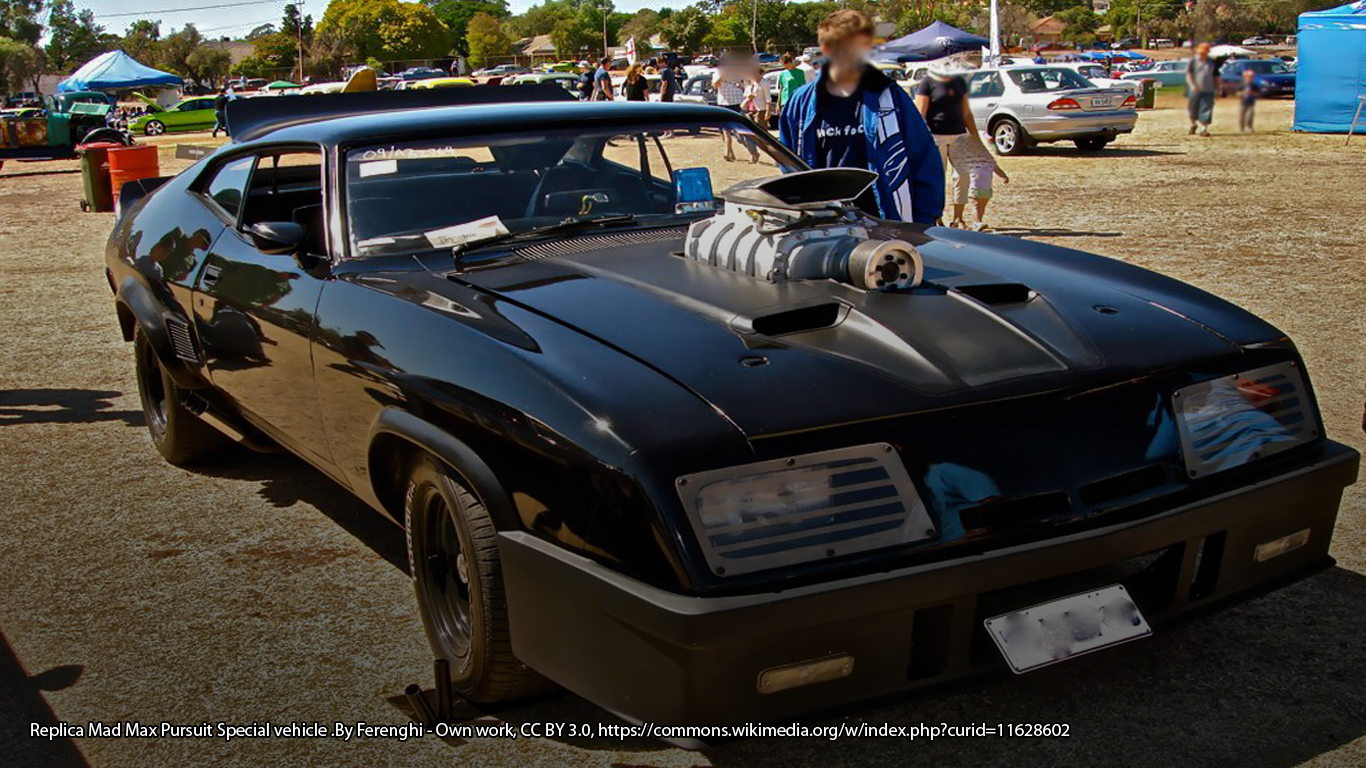 After Mad Max Fury Road came out a lot of people tried to make sense of the chronology of the four films. One of the most interesting theories argues that Mad Max Rockatansky is a folkloric character. A mythic hero of a post apocalyptic world. Let’s start at the beginning.

Mad Max is one of my favourite films, and it is a very odd film. A lot of the post apocalyptic style and imagery that people associate with the franchise is established in Mad Max II (sometimes known as The Road Warrior). The original Mad Max is pre-collapse, a world on the verge of falling over a precipice rather than already toppled. Even the signs over the Halls of Justice entrance are falling off the arch. The Toecutter’s gang rage across the Outback virtually unchallenged, yet the grass still grows, there’s petrol and no-one is wearing leather bondage gear while pillaging. (The bikes in the first film owe more to a little known cult Australian film called Stone, which also features Hugh Keays-Byrne who went on to star as The Toecutter and Immortan Joe.)

This is where we see Max’s character established, first as the cool hero during the pursuit of the Night Rider. After all his colleagues wreck their vehicles Max takes up the chase, his mere presence behind the Night Rider enough to reduce him to tears. Then we see the creation of the broken hero. His best friend burnt alive, his child killed and his wife left in a vegetative state. He has nothing left, but to go in pursuit of revenge.

Mad Max is a tale about hero creation, a fact made explicit in a conversation between Police Chief Fifi Macaffee and Max, when Fifi says, “People don’t believe in heroes anymore. Well damn them! You and me, Max. We’re gonna give ’em back their heroes.”

That’s what the film does, not through some higher purpose, but through the breaking down of an honourable man and the creation of something new.

Apart from the tone of the film there is another way Mad Max differs from the sequels. The perspective. In the first film we’re in Max’s community. His world. In all three subsequent stories Max is a transitional character in the story of other communities. He passes through at times of great stress, and moves on. In Mad Max II the story is told by the now adult Feral Kid, and in Mad Max Beyond Thunderdome  Savannah Nix speaks the community’s folklore each night.

“This you know. The years travel fast, and time after time I done the tell, but this ain’t one body’s tell. It’s the tell of us all, and you gotta listen it and remember cos what you hears today you gotta tell the newborn tomorrow…but most of all we remember the man who finded us, him that came the salvage.”

In Fury Road the storytelling of the legendary Max isn’t as explicit to the narrative of the film, but the way he’s captured, held, escapes and leaves at the point the community finds its release from oppression is pretty clear. This is also implied in the way that Max is really a supporting character in Furiosa’s story. However, apart from the first film he’s always really a peripheral character to the stories of the communities. A catalyst of change. It’s also noticeable, as Hernán Gamboa points out on his YouTube channel ‘The Long Take’, that every time we see Max his Interceptor also returns (OK, in Thunderdome it’s in a pretty sorry state and he’s using it as a covered wagon at the start, but it’s still there.)

So if Max Rockatansky is a folkloric or mythic hero, what type of hero is he? What’s noticeable is that in all three sequels he appears at times of crisis. In Mad Max II the oil refinery is under daily attack by the forces of the Great Humungus. In Mad Max Beyond Thunderdome Max’s presence allows the children to escape to the abandoned city, and in Fury Road Max’s presence is the catalyst for Furiosa to lead the people from Immortan Joe’s control.

The most obvious folklore parallel is the king in the mountain motif. In the Antti Aarne and Stith Thompson system, the king in the mountain is folktale type 766. The most common motifs involve the legendary hero sleeping, often in a cave or chamber, waiting for the time when the nation needs them once more. Usually the hero has a military background, and is discovered by an individual who has a puzzle to solve which will allow the hero to return. The best known of these stories are King Arthur, Charlemagne, Key-Khosrow of Persia, and King David. However, I think Max Rockatansky fits a specific subset of this hero type, one best represented by General Ludd, Captain Swing, the Golem of Prague, or even Robin of Sherwood. All are vague characters, very difficult to pin down to historical individuals, who lead or defend certain sectors of society when they’re under threat, particularly those who are working class or vulnerable to oppression. The post apocalyptic wasteland stands in for the mountains where the King sleeps, the night where General Ludd waits, or Sherwood Forest where Robin Hood hides.

Max does not appear to the communities in the films to lead them as a king but to free them from oppression. In each case he is not rescuing the nation but the ones who are being trampled at the bottom rungs of the ladder. He is a catalyst not a leader. A symbol for that freedom. He embodies rebellion and the drive to fight back. Max appears and goes, leaving the world a better place for those who tell his stories.

Another fascinating aspect of the idea of Mad Max as a King in the Mountains folk hero is that these ideas arose online and have become an example of digital folklore, particularly through the excellent analysis of Hernán Gamboa. The transmission route for this interpretation of Mad Max Rockatansky is within a digital setting, showing how important online conversations and exchange can be in creating new mythic storytelling.

Mad Max has an important role to play in the history and story of the wasteland. Maybe there once was a man called Max Rockatansky who was a ‘Bronze’, or maybe that’s part of the folklore surrounding the Road Warrior. Either way, in the post apocalyptic world of the films, he lives on in the stories and the tells of those who survived to pass on his adventures to the next generation.

Mad Max Beyond the Thunderdome, 1985, Directed by George Miller

Matt Gerardi, 2017, Mad Max: Fury Road is dense with myths, but Max is the biggest of all