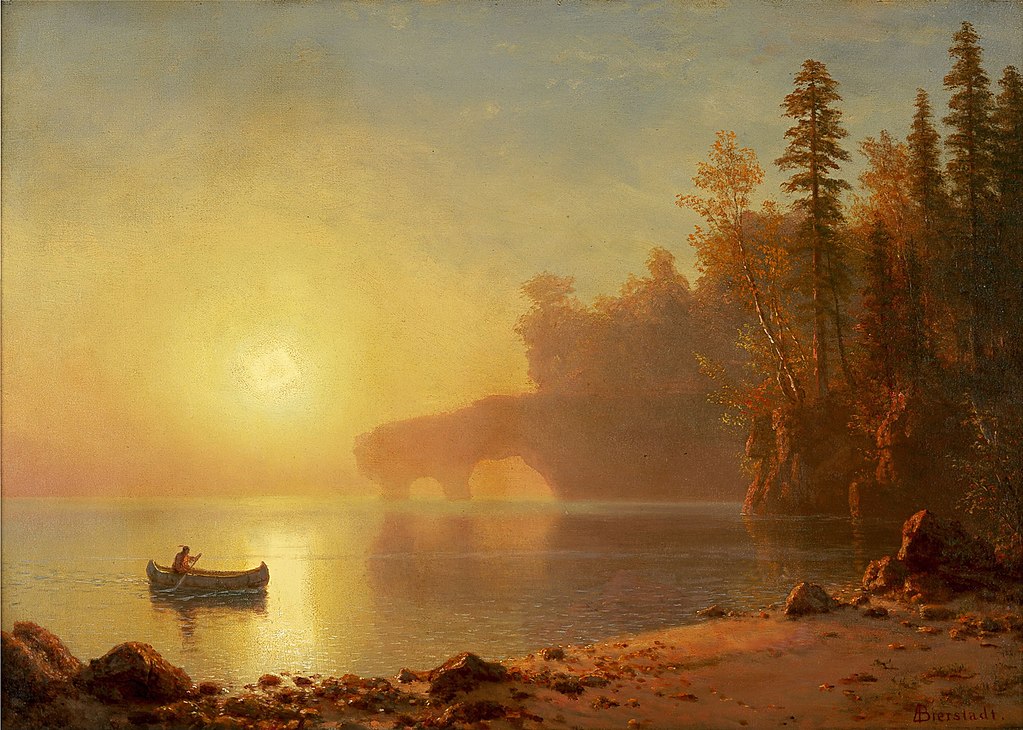 Native American traditions have a unique cosmology, with much of the action in many stories taking place in a parallel world in the Sky.  It is the home of deities such as the Sun, the Moon and Morning Star, but ordinary people can sometimes access it by means of a rope, a chain of linked arrows, by climbing a tree which then grows right up to the heavens, or by darting quickly through the dangerous mountain doorway, which constantly opens and closes on the distant horizon. What is the Sky World like, and who lives there?

Ancient tales collected around the turn of the 20th century give some intriguing clues as to what the Sky World landscape was like. In the 1890s, an ethnologist called Edward William Nelson visited Alaska and reported back from the people who lived around the Bering Strait:

‘A shaman…told me that…he knew [another shaman] who had been…as high as the Sky, and went up that high by flying like a bird and found that the Sky was a land like the earth, only that the grass grew hanging downward and was filled with snow. When the wind blows up there, it rustles the grass stems, loosening particles of snow which fall down to the earth as a snowstorm. When he was up near the sky he saw a great many small, round lakes in the grass, and these shine at night to make the stars.’

According to a sacred story of the Nlaka’pamux (Thompson River People) of British Columbia and Washington, the Sky World comprises a vast, flat plateau, covered in grass but with no trees, stretching as far as the eye can see, dotted with wild potatoes and gusted by a harsh wind. Its inhabitants are quite extraordinary: they are mostly inanimate objects such as baskets, combs and awls, with strange supernatural powers that make them spring to life if anyone interferes with them. They live alongside a pair of kindly, supernatural spiders.

According to the people of Zuni Pueblo in New Mexico, the Sky World is dominated by Turquoise Mountain, where everything glows bright blue – hence the colour we see down here on Earth. It is home to a magnificent city of eagles.

In some of the old narratives, quite ordinary people find themselves visiting the Sky World. A very common storyline opens with two young women sleeping outside on a hot summer’s day. As they chatter about the stars shining above them, one makes a careless wish to win a husband as splendid as the huge, bright morning star. Some time later, she finds herself abducted up to the Sky by a handsome stranger – who turns out to be none other than the Morning Star himself! She happily marries him and willingly undertakes the usual women’s work of digging up wild turnips. Before she begins, she is strictly forbidden to touch the largest purple turnip flower. Inevitably, she disobeys – and when she digs it up, she finds a huge, gaping hole underneath, leading down to the Earth below. Seeing the familiar trees, rivers and even her own village below, her heart aches with desperate longing. Eventually, she does return home, by descending a long spider’s web; but as in all tales of visits to unearthly places and broken taboos, her life is never the same again.

Morning Star appears in a number of other stories, but the most important characters in the Sky World are the Sun and the Moon. In a story from the Niitsitapi (Blackfoot) people of the Great Plains, the Sun is a dazzling blaze of light, who shields honoured human visitors from his heat and brilliance by donning a cooling cloak of shadows. He is a formidable deity who states:

‘I am the only chief. Everything is mine. I made the Earth, the mountains, the prairies, the rivers, and the forests. I made the People and all the animals. I can never die. True, the winter weakens me – but every summer I grow young again.’

His wife, the Moon, is a pale, shining woman who sits on a shimmering blanket.

The Wyandot people, originally from Ontario, have a tale which says the Sun and Moon have a stormy marital relationship – an allegory of domestic violence. It tells how the Sun makes his daily journey across the sky, with the Moon having to follow a long way behind. However, one day he stops to dither and the Moon bumps into him. Outraged, he gives her a cruel beating, leaving her almost as cold as winter, with only a tiny, bent sliver of her left. Despite attempts to heal her injuries, the Moon’s former radiance can only be revived for a short time before she starts to decay again. This continues every month, over and over – which is why, to this very day, the moon is constantly waxing and waning.

The Cherokee of the southeastern United States, on the other hand, say the Sun is a woman. Every day, she breaks her long daily journey by stopping off for lunch with her beloved daughter, who lives in the centre of the Sky. However, the people on Earth suffer badly from the callous Sun’s burning hot rays, and in revenge they arrange to have the daughter killed. The Sun is so distressed that she stops shining completely, resulting in a dramatic attempt to bring Sun’s Daughter back from the land of the dead.

The Tlingit of Alaska have a story in which the Moon is a malicious old hag. Two boys are out on a shooting practice on a dark evening, when one of them starts mocking the Moon and calling her ugly. The next moment, he finds himself whisked up to the Sky, where she imprisons him in her house and subjects him to cruel tortures. His friend shoots up a series of arrows, which magically join together to form a long ladder. It takes him several days to climb it, with overnight stops camping on the rungs, but eventually, he reaches the Sky World himself and rescues the first boy. At the end of their adventure, they find a much simpler way to travel between Sky and Earth: they simply lie down and ‘think of nothing but home’ until they get there.

This article gives just a small taster of the extraordinary images and ideas that the old time story tellers employed to describe and explain the cosmos. The sacred stories of Native America rank amongst the world’s greatest narrative treasures. To read more, please see my book Native American Myths collected 1636-1919.