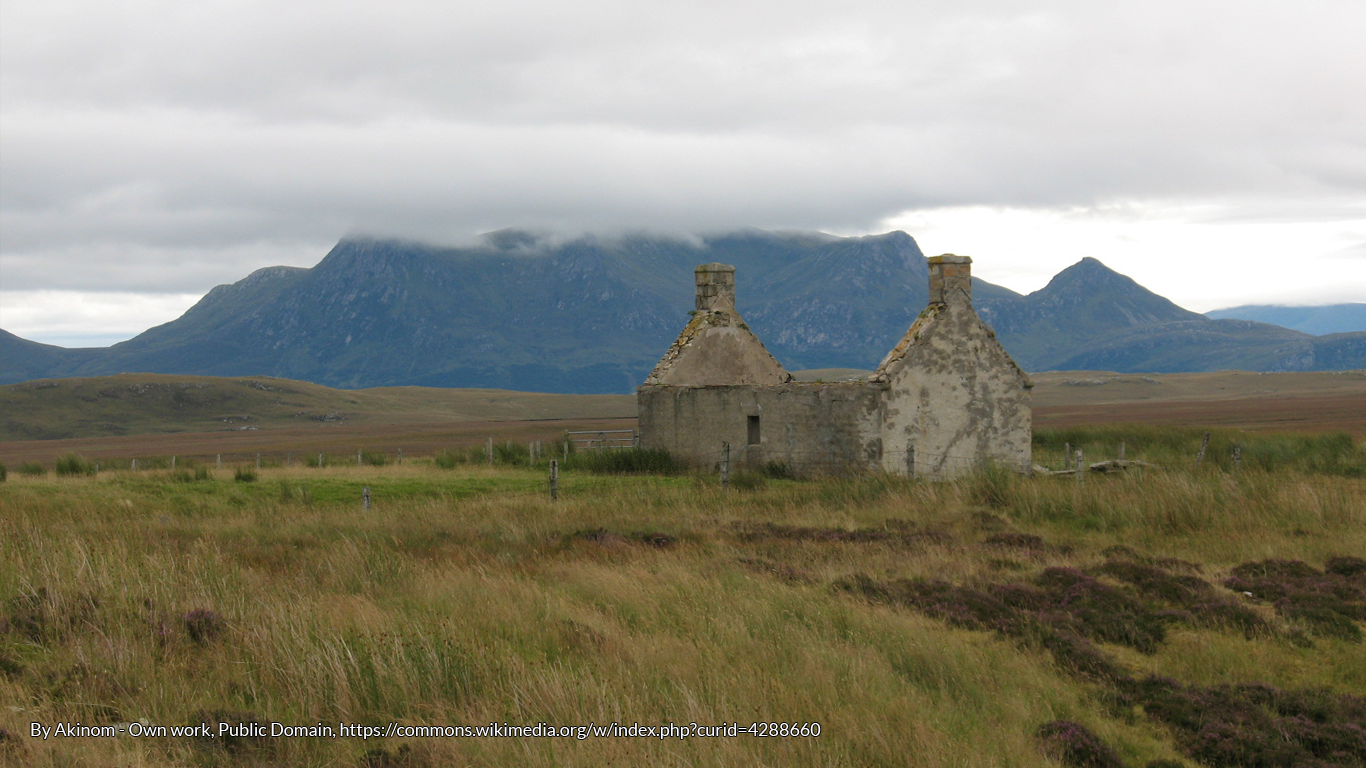 People have been fond of telling and hearing stories in the Scottish Highlands and Hebridean islands since time immemorial, known in Gaelic as Sgeulachdan. Though the tradition has been in decline for over a century, many tales have been preserved thanks to the efforts of dedicated collectors and Gaelic scholars. Here is a taste of what you might hear one night over the fire in a cottage while the wind skirls outside:

The Fiddlers and Fairies of Tomnahurich

Lying just outside Inverness, Tomnahurich hill now serves as a graveyard, but is quite a significant place in local lore. One legend is that the giant Fionn mac Cumhail, or Fingal, and his band of warriors lie sleeping below, awaiting to arise once more when the country is in peril. Another tale tells of two Strathspey fiddlers, who, after failing to earn any money by playing for the locals in Inverness one Christmas, wound up entertaining an unusual gathering of people within Tomnahurich itself. At the end of the festivities, the old man who employed them (said to be Thomas the Rhymer himself), took them back to the entrance, paid them, and sent them on their way. The two fiddlers were immediately stunned at the changed appearance of Inverness overnight; the wooden bridge had been replaced by a stone one, the town had grown and it’s inhabitants wore strange clothes, and thought the fiddlers were mad when they told their tale. The men made their way back home to their village in Speyside, and found that everything there was radically different. They didn’t recognise anyone, until one old man came up and said they must be the two fiddlers who inexplicably vanished over a century ago, to the great sorrow of their friends and family. Stunned, the fiddlers headed to their parish church, and found the names of their long dead wives and children on the gravestones. They entered the church, and listened to the sermon of the unfamiliar minister. When the church bells rang, the fiddlers disintegrated into dust…

Sgathaich and the Warrior School

A very old legend surrounds Dun Sgathaich Castle in the Isle of Skye, in which it is said Sgathaich, a warrior ran her ‘school for heroes’. Otta F Swire, has it that Cuchullin, the Hero of Ulster, unbeaten in battle, heard of Sgathaich and her school. Most pertinently, he heard that Sgathaich had yet to be bettered in a fight, so he arrived in Skye, wanting to see for himself. On arrival, he wasn’t treated with the awe he expected; much to his chagrin, Sgathaich and her students were indifferent. Cuchullin then fought and defeated all of the students, after which Sgathaich took notice and came down from her lofty heights, ordering her daughter to face Cuchullin. Upon the defeat of her daughter, the angry Sgathaich took on Cuchullin, but both found the other unbeatable. Sgathaich’s daughter prepared numerous meals to stop the pair battling, but to no avail, until she produced a roast deer stuffed with hazelnuts. During the meal, Sgathaich and Cuchullin realised they would never best each other, so made peace and agreed to come to the aid of the other should they call for help.

The Importance of Keeping the Sabbath

Among the tales collected by Father Allan MacDonald of Eriskay is one that echoes the strictness in parts of the Highlands and Islands of not breaking the Sabbath. A workman, Dougal MacKintosh, of Loch Eynort, was employed at the pier of Loch Skipport. Each weekend, he returned home, crossing back to Loch Skipport before sunrise the following Monday. During one such journey, he stopped to retie his shoe laces, and on standing, beheld a strange man, who said in Gaelic: “Be not afraid of me, but take care that you do not break the Sunday again.” The rule was, as Father Allan MacDonald notes, was that the Sabbath ran from sunset on Saturday to sunrise on Monday …

At Rothiemurchus, near Aviemore, much credence is still given to the notion that a long dead Chief of Clan Shaw still makes his presence known among the living. In life, he was an intimidating figure, over six feet tall, with a grimace to match. This 14th century chief, known as Seath Mor Sgor Fiaclach is buried in a lonely part of Rothiemurcus forest, approximately 20 feet away from the local graveyard. Local legend has it that people travelling through the forest encountered a tall, shadowy figure challenging them to a fight. Those who accepted were safe, those who who showed terror were never to be seen again.

Seath Mor Sgor Fiaclach’s tomb has five white stones placed on top, said to be protected by the Bodach an Duin, and a terrible fate awaits those who meddles with the stones. Such was the case in the early 19th century, when the Duchess of Bedford leased the Doune of Rothiemurcus. A footman working for her decided to see what would happen and threw one of the stones into the River Spey. His body was fished from that exact spot a few days later, and the missing stone somehow back in its usual spot. Misfortune also occurred during the 1980s, when two workmen obliged a group of tourists asking to see Seath Mor Sgor Fiaclach’s grave. One of the workmen was hospitalised for three weeks with a 103 degree temperature, losing a lot of weight, whilst his colleague suffered a brain haemorrhage. The stones briefly vanished in 1989, thought to be down to local youths daring each other. A wrought iron gate now covers the stones to keep them in situ.

Pabay Island lies just off Skye, and was the scene of a rather ferocious battle with none other than Satan himself. The deserted Chapel on Pabay had become a hide out for a band of outlaws. One day, their leader thought it would be an idea to get rid of their enemies in one fell swoop with the help of Satan. The Evil One was summoned by means of a large fire being set on the beach and three unfortunate cats being cruelly burned alive, with spells cast over them. This raised some minor demons, but the bandit chief wanted none other than Satan, who duly appeared and asked what was wanted of him. The bandit chief ordered him to kill the two men whom he feared the most. Satan said that the price for this was the forfeiture of two souls, much to the discomfort of the outlaws, leading to squabbling.

The bandit chief had always boasted he could defeat Satan and take over Hell if they could procure swords that didn’t melt, which Satan just happen to mention. The offer on the table was that Satan and his minions would kill all the gang’s enemies then, come back and fight for the outlaws’ souls. This was duly accepted. After smiting their enemies, the battle took place, every outlaw falling easily, despite them having broadswords. Only their leader held out, who used a sword with a cross hilt. A black cat appeared from nowhere and knocked the sword from the bandit chief’s grasp, and he promptly vanished. The stones on the beach where this took place were said by Otta Swire to still be blackened by the fire.

Though told in short form here, these stories could actually take up to several nights to recount, holding an audience rapt, particularly if the teller was skilled. What is even more amazing is that these tales were on the whole told from memory. Although, the downside of this is that on the death of the storyteller, many tales were lost for good. I recall during lecture at university on oral tradition, it was pointed out that the death of a storyteller was the equivalent to the loss of a sizeable library.

Holder, Geoff (2010) The Mysterious Guide to Skye and Lochalsh, The History Press

Ross, Anne (1976) The Foklore of the Scottish Highlands, Batsford, London

Swire, Otta F (1963) The Highlands and their Legends, Oliver and Boyd, Edinburgh and London