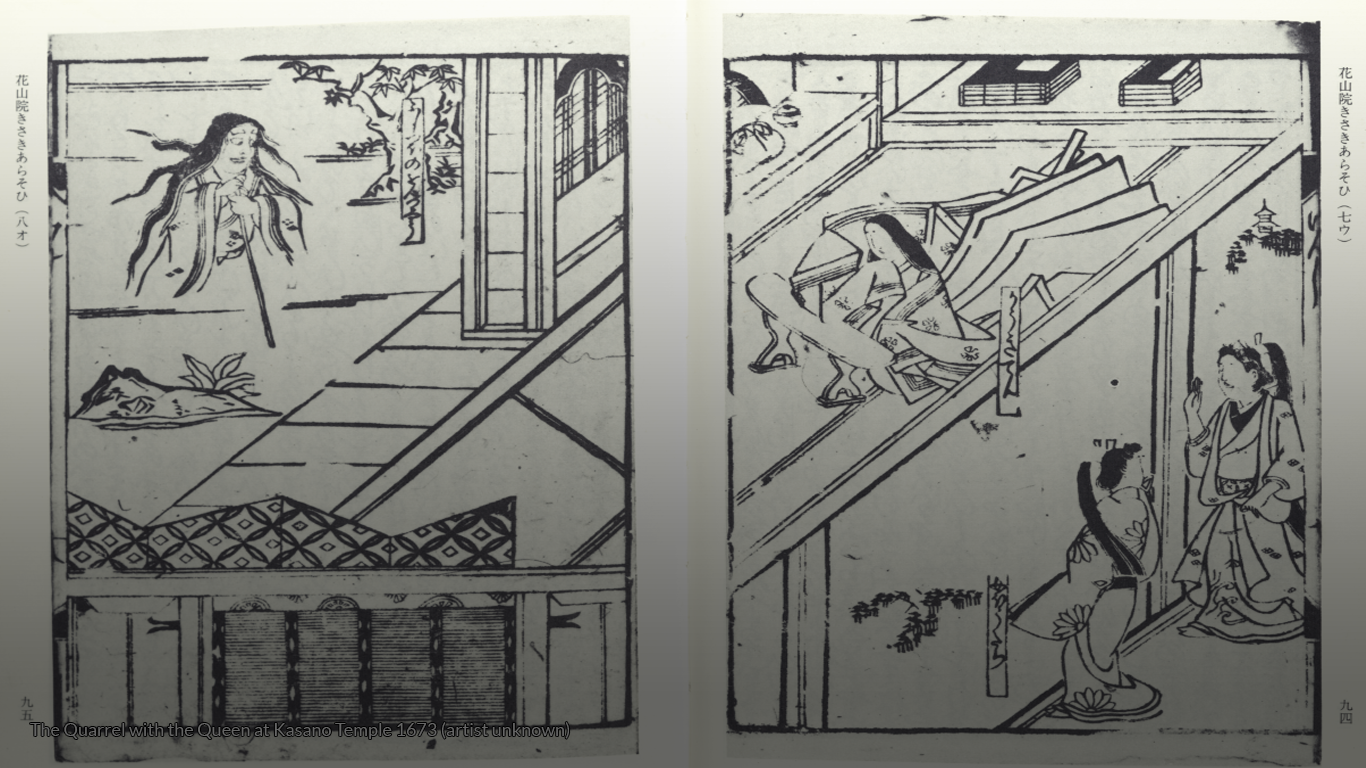 In 1750, Edo-period Japan, Maruyama Ōkyo opened his eyes from a fitful sleep and beheld a dead woman. She was young. Beautiful. And pale. Unnaturally drained of colour, a loose, bone-white burial kimono covered her bloodless skin. Her bleached appearance was contrasted only by the thin slits of her black eyes and by the long black hair that hung dishevelled across her shoulders. Trailing his eye downward Ōkyo must have shuddered for a moment. She had no feet.

But her face was calm. Soothing. There was nothing in her eyes that made the seventeen-year old Ōkyo apprehensive. The dead woman merely watched him a moment. And then disappeared. Ōkyo, an artist by training and passion, sprang from his futon, grabbed his brushes and a nearby roll of silk, and mustered all of his skill to capture the dead woman exactly as she had appeared before him.

The dead woman was no stranger to Maruyama Ōkyo (円山応挙; 1733–1795). Her name was Oyuki, and she had been Ōkyo’s lover. According to a note on the scroll box that housed the painting – put there sometime later by a former owner of the piece named Shimizu – Oyuki worked as a geisha at the Tominaga geisha house in Ōtsu city, Ōmi province, modern-day Shiga prefecture. Oyuki died young, how or when the note does not say. Nothing more is known about her. What we do know is that Ōkyo mourned her deeply. Perhaps too deeply.

Pouring his longing into the silk, when he finished the painting that morning in 1750, Ōkyo had done more than create a simple picture. Without setting out to do so, he had painted one of the most famous works of Japanese art: The Ghost of Oyuki ((お雪の幻); Yūreizu (Oyuki no Maboroshi)), a work that singularly defined the image of yūrei – the Japanese ghost – and created an enduring Japanese cultural legacy.

Light colours on a creamy silk; The Ghost of Oyuki is a wisp of a picture. Oyuki’s figure takes up only about a third of the roll of silk. Soft lines curve gently, creating the outline of a woman. The dense black of her hair fades to nothing more than flicks of a brush by the time your eye makes it to the bottom of her kimono. Ōkyo gave Oyuki a Mona Lisa-like inscrutable half-smile under hard eyes, an expression that either reprimands or romances depending on the angle. Her right hand is tucked into the folds of her kimono covering her breast. The diaphanous kimono fades to nothing below her waist.

Not large in scale, Oyuki is large in influence. The white-clad ghostly figure has become as much a part of Japan’s cultural iconography as the black-clad ninja. And just as elusive.

A Brief History of Maruyama Ōkyo

It is possible that Ōkyo doubted the authenticity of his vision of Oyuki for a moment, but the young man had made his career on the evidence of his eyes. If Ōkyo painted something, you could trust it.

Born Maruyama Masataka into the farming caste in Ano-o (modern day Kameoka city, Kyōto prefecture) while still a young teenage Ōkyo moved to Kyōto city and began his artistic career as an apprentice at a toy shop painting the faces on to wooden dolls. From there he furthered his talent apprenticing to various master artists both indigenous and foreign. By the time Ōkyo came into his own he was a man of incredible talent and reputation. He regularly produced commissioned paintings for both emperors and shōguns as well as created major works for religious sites.

Ōkyo was the ultimate naturalist painter. Founder of the Maruyama school of painting, he emphasized direct observation of depicted subjects. Considered pornographic at the time, Ōkyo was the first Japanese artist to use nude models for life drawings and paintings. This dedication to observational realism was more than simple artistic sentiment. A devout Buddhist, Ōkyo stated that man must find Buddha in the here and now, in the real world, and not in fantastic visions of other realities.

And yet it is the fantastic that has become Ōkyo’s legacy. His Ghost of Oyuki has been haunting Japan for a long time. She has become an archetype in the Jungian sense, as if Ōkyo brushed the image of his lost love not on delicate silk, but directly on the collective consciousness of the Japanese people. Pass out paper and pens to modern Japanese people, ask them to draw yūrei, and you will get images almost identical to Ōkyo’s portrait; a pale woman with black hair in a white kimono, with no feet.

To the Western viewer, Oyuki’s apodal appearance is not her most striking feature. She has no left arm either. But to the Japanese, her lack of feet is her defining characteristic. When compared not only to Western ghosts, but also those of neighbouring Asian countries like China and Korea, the ashinonai yūrei (足のない幽霊) or footless yūrei is the aspect that is held up as uniquely Japanese. Chinese ghosts wear a similar burial costume as Japanese yūrei, but they saunter about on ghostly feet rather than float above nothingness like their Japanese cousins.

Traditions must start somewhere, and the most readily accepted origin of the footless yūrei is Maruyama Ōkyo and The Ghost of Oyuki. In his book 100 Important Points of Study Regarding Yokai (妖怪大百科; 2004) manga artist and Japanese folklore authority Mizuki Shigeru wrote:

Speak to anyone about yūrei and the first image to pop into their head will be of a footless yūrei. But actually, the footless yūrei only dates back to the Edo period.

An artist named Maruyama Ōkyo, famous for his yūrei pictures, was the first person to draw an image of a footless yūrei.

But like most things in life however, these claims are questionable.

The footless yūrei may be uniquely Japanese, but not all yūrei float above the floor. In the most obvious example, the rhythmic karan karon of ghostly geta sandals worn over ghostly feet announces the arrival of another famous yūrei, Otsuya from the massively popular kaidan Botan Dōrō. Otsuyu’s footsteps are sometimes explained away by citing the Chinese origin of her story, but in actuality there are numerous other examples where the sounds of ghostly footfalls are an element of the story.

On top of that, Ōkyo was not the first person to draw a footless yūrei. In the 13th year of the Hirofumi era (1673), sixty years before Ōkyo’s birth and seventy seven years before he would paint Oyuki, another artist drew an image of a footless yūrei as a panel in the picture-book story of the puppet play Kasannoin Kisakiarasou (花山院きさきあらそひ; The Quarrel with the Queen at Kasano Temple). Another book from the same era, published in 1690 called Shiryō Gedatsu Monogatari (死霊解脫物語聞書; The Story of the Salvation of a Ghost) also features a small image of a footless yūrei.

However, the footless yūrei was clearly a case of it not mattering who did it first, but rather who did it best. The Quarrel with the Queen at Kasano Temple is without a doubt the earlier image, but it did not inspire a generation of artists to follow it. When Ōkyo presented his painting of his lost love Oyuki, however, everything changed. The ashinonai yūrei became accepted as the true appearance of yūrei

Ōkyo would paint other yūrei during his career. Usually these were commissioned paintings from wealthy patrons who wanted a portrait of a dead relative, but often they were simply collector commissions who wanted their own ghost painting by the famous artist. Unable to summon yūrei on command and yet unsatisfied to create from imagination, Ōkyo used models for these portraits. His preferred models were living family members who resembled the dead people.

In at least one account, Ōkyo attempted to again capture a true yūrei in his art. Japanese folklorist Lafcadio Hearn tells a story of Ōkyo in his 1894 book Glimpses of Unfamiliar Japan being commanded by the shōgun to produce an image of a yūrei. In response to which Ōkyo rushed to the house of a sick aunt and waited by her bedside for her to die so he could paint her escaping yūrei. He failed and had to content himself with sketching her emaciated body post-mortem.

Looking at these later works of Ōkyo, they possess none of the weight and realism of The Ghost of Oyuki. They are done in a completely different style. Perhaps he resented being obliged to paint something he hadn’t seen and so purposely created cartoony figures that could not be mistaken for his authentic portrait of Oyuki, painted from life.