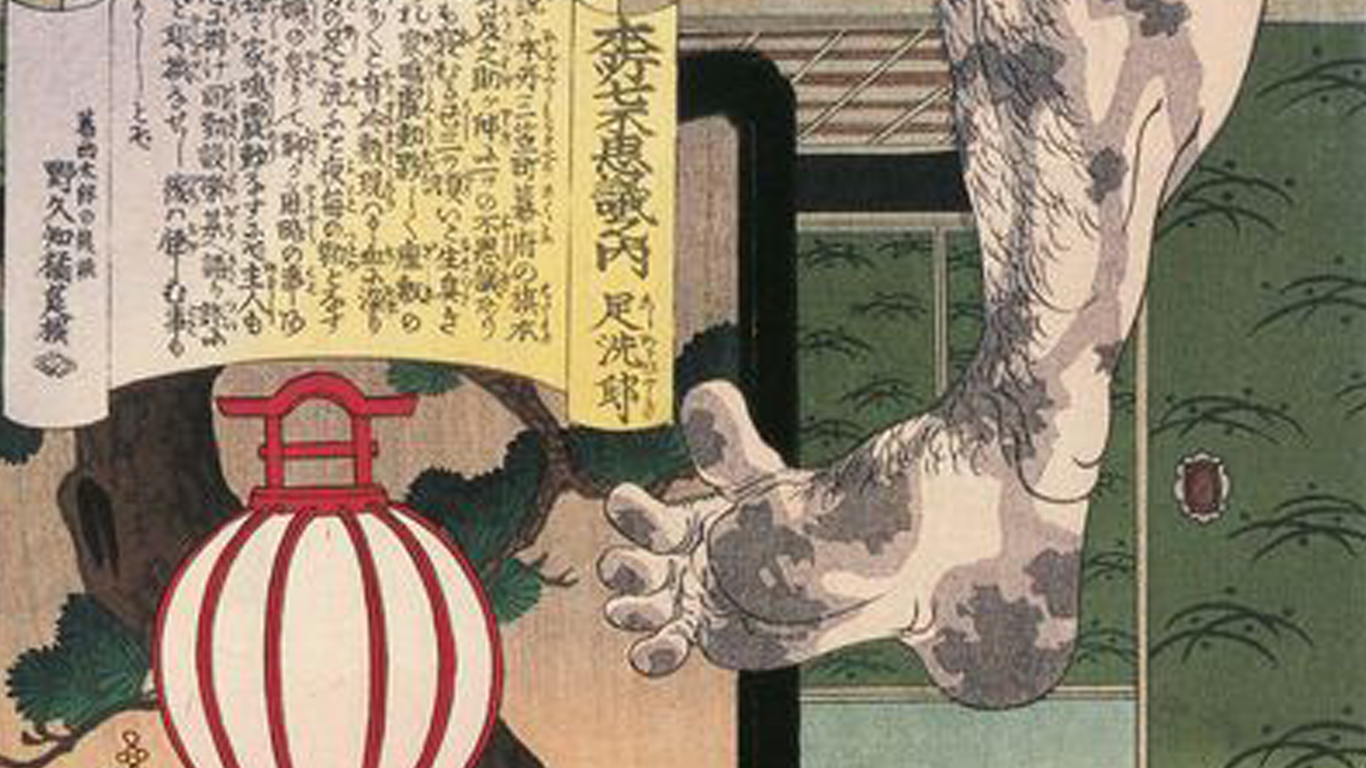 Japan is monster country. Nowhere else on earth has the sheer variety of bizarre beasties lurking in every shadow. And no-one’s monsters are as weird.

By official count Japan is haunted by eight million gods and monsters, although in Japanese “eight million” is a euphemism for “waaay too many to count.” Monsters are the deep magic of Japan; part of the creation myth, legends tell of the god Izanagi-no-Okami emerging from a sojourn to Hell and bathing in a sacred spring. As water fell from his body it soaked into the earth, infusing the soil of Japan with latent supernatural energy. This energy manifested as beings, forming kami (gods) if worshiped, and yokai (monsters) if left wild and untamed.

While there have been many monsters across the millennia, most of the yokai we know now were born in the Edo period (1603-1868), coming from a popular parlour game called Hyakumonogatari Kaidankai – A Gathering of 100 Weird Tales. Players would light a hundred candles in a room, then try to freak each other out telling spookier and spookier stories. At the end of each story, the teller would extinguish a single candle. The room would slowly darken, and the atmosphere intensify.

Japan’s yokai rarely tell a moral story. They rarely explain natural phenomena or serve any didactic purpose. They are often spooky. Sometimes funny. If there is one lesson yokai teach, it is that the world doesn’t always make sense. Sometimes things are mysterious, and you can’t understand them. You just accept them. You allow yourself to be amazed, and maybe a little scared, but you don’t try to look for answers.

But mostly, they are just weird. And here are the weirdest of them all.

An elegant, high-class lady invites one of her friends over for some tea. In the middle of their pleasantries, an enormous, filthy foot stomps down from the ceiling. The lady sips her tea calmly as her servants rush in with water and washcloths and give the foot a good scrubbing. When it is all clean, the foot disappears back into the ceiling, vanishing without a trace.

The lady’s guest is aghast, while the lady calmly explains “When it first appeared, it would kick over the tea service and rampage around the house. Be we quickly learned that if we give it a wash, then it will disappear again with no further disturbance.”

The Ashiarai Yashiki was a favorite story of the Edo period, coming from the Honjo ward of present-day Tokyo. It was one of a collection of legends known as the Seven Wonders of Honjo.

Sneaking into the Yoshiwara pleasure quarters of Edo, you might think yourself well-secluded and safe from prying eyes, ensconced in one of the upper-level rooms. But even as you prepare for your dalliance with your chosen beauty of the night, a horrid face appears at the window. The fright is more than enough to put you off your amorous mood, and you know that you have had an encounter with the Taka Onna – the Tall Woman.

The Taka Onna is one of many monsters to spring from the imagination of artist Toriyama Sekien, appearing in his yokai collection Gazu Hyakki Yagyo – The Illustrated Night Parade of 100 Demons. Like many of his creations, Toriyama gave the Taka Onna a name and face and little else. It was up to the citizens of Edo to fill in her story, telling the tale of a woman too ugly to marry or even to hook up with for a single night. Her bitterness at being denied the pleasures of the flesh transformed her into a yokai. Able to stretch her body, she became obsessed with peeking through windows at the pleasure quarters, denying others what she could not enjoy herself.

On a list of “weirdest monsters,” the Tofu Kozo might seem a little out of place. He is a small boy in a huge hat, carefully carrying a wobbly plate of fresh tofu. In fact, there is almost nothing to mark him as a monster at all. Shy and harmless, the little Tofu Kozo does little more than run through streets on rainy nights trying to deliver his plate of tofu to wherever he is going.

What makes the Tofu Kozo worthy of this list is his origins; instead of coming from artists or storytellers, the Tofu Kozo is the first yokai developed specifically for advertising purposes. He appeared during the Anei era (1772-1781). A picture book of the time, Edo Meisho Zue – Collection of Pictures of the Famous Places of Edo, shows tofu dealers carrying their wares in the same iconic costume as the Tofu Kozu. It is speculated that an enterprising shop created the Tofu Kozo as an advertising mascot, only to see his popularity run away from them. The Tofu Kozo began appearing on everything from clothing to pottery to children’s toys. Eventually he was given the grand title of Prince of Yokai, being declared the child of the supreme commander of yokai Mikoshi Nyudo and his wife the Rokurokubi.

A ship of pirates at sea come across a lone woman floating in the water. They bring her aboard and discover that she is all too willing to share their beds in gratitude of the rescue—all of their beds. One after the other they pay her a visit. However, the next morning they find something is amiss; or more accurately, something is missing. The entire pirate crew has lost their testicles.

As they hear laughing from the sea, they find the woman again floating in the water. She holds up a bag with all of their testicles in it and says she will return their family jewels in exchange for all of the gold in their holds. The pirates reluctantly agree. With the exchange made, the woman reveals her true form, a massive turban shell clam. She then disappears into the wave.

This is another one from Toriyama Sekien, although again, the story is not his. In the Gazu Hyakki Tsurezure Bukuro – The Illustrated Bag of 100 Demons, Toriyama waxes poetically at the Sazae Oni, as a metaphor for all things being possible under heaven and earth. Later storytellers attached the tale of a sea succubus testicle thief. Which means that at some point in time someone looked at a turban shell clam and thought “Umm…sexy.” <Shudder>

Late at night, walking down the alley by yourself, you see a stranger in front of you. The stranger stops in the lantern light and lets you approach closely. They suddenly bend over and spread their butt cheeks. If this is not disconcerting enough, from where their anus should be a single eye blinks at you.

When talking about Japan’s weirdest monsters, you better end with shirime! They don’t get any weirder than this. The origin of this oddity is in the work Buzon’s Yokai Picture Scroll by the poet and artist Buzon. Unsurprisingly, Buzon didn’t include any details about his peculiar creation, and we have no provenance beyond this single drawing. Yet this was enough for shirime to capture the Japanese imagination and still be included in the pantheon of yokai long after others have faded away.

I can’t imagine why….