Mother goddesses are present in all kinds of mythology around the world. They all bring the archetypical mother qualities: giving birth, nurturing, taking care, and teaching their offspring, for example. In Brazil, we have the influence of three big –- and totally different –- cultures that shaped customs and beliefs we have today.

These three cultures are:

In this post, I’ll bring some maternal figures from each of these three groups and how they are still alive in our culture today. 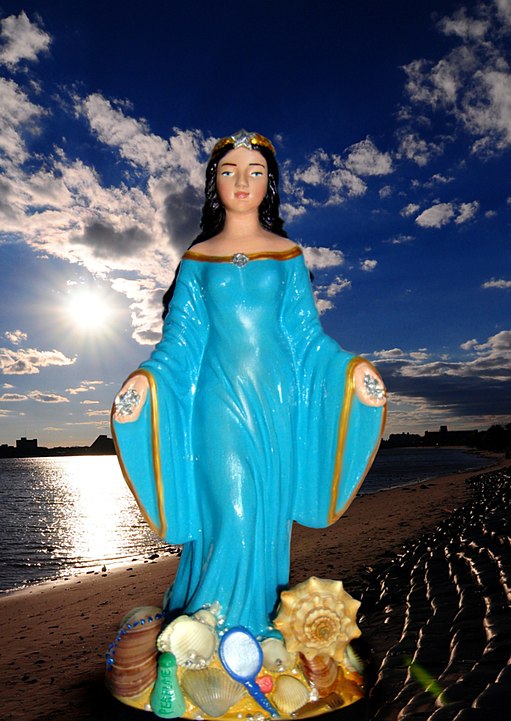 Jaci: Mother of All

Jaci, or Jacira, is the mother goddess in Tupi-Guarani folklore. She is the moon goddess who gave birth to River Amazon and to all life forms. Tupi-Guarani is one of the indigenous peoples from Brazil. Their customs and beliefs are alive today.

Legend says that Jaci fell in love with Guaraci, the sun god. Guaraci started burning in infatuation and then he started setting fire on everything on earth. Jaci then started crying and couldn’t control her emotions. Both decided that it would be better if they were forever apart, preserving life.

So while Guaraci has his eyes open, Jaci remains hidden. When Guaraci sleeps, Jaci comes out, brightening up the dark sky.

As Jaci couldn’t see her lover she started crying again, but for sorrow. Her tears flooded the earth and created the River Amazon. 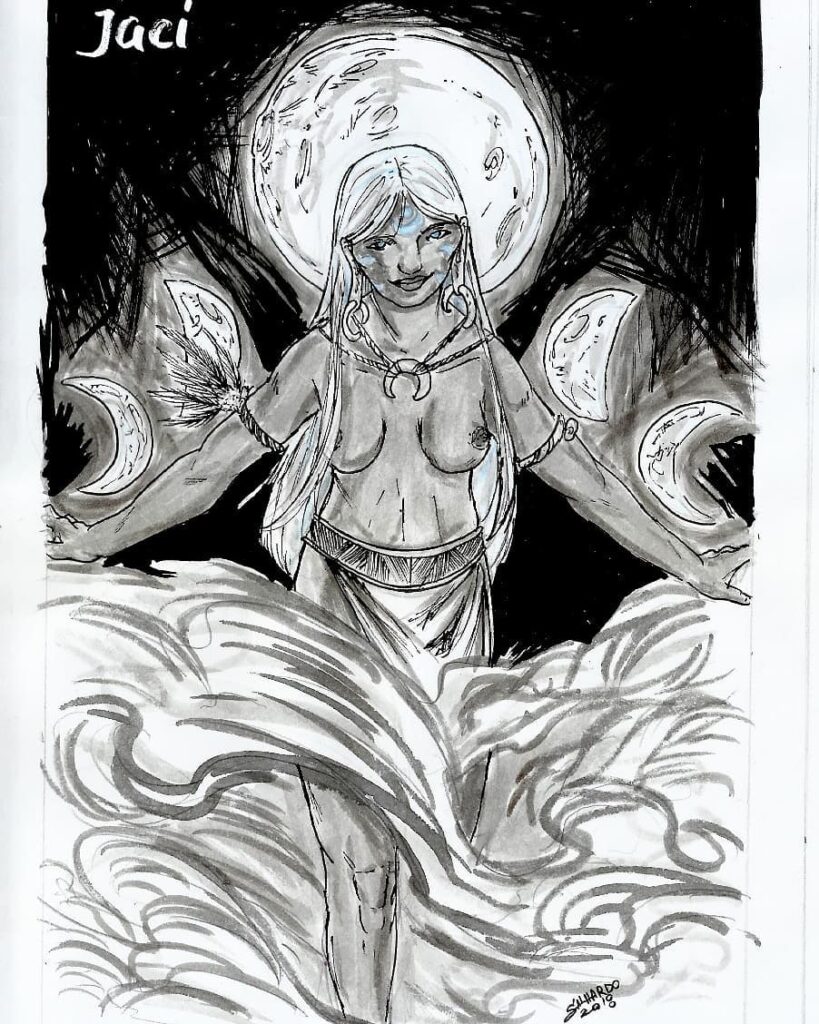 Jaci by @galhardo_art, used with permission.

Yara, or Iara, is considered to be the “Brazilian siren”. She is often depicted as a beautiful mermaid who lives in rivers and lakes and lures fishermen who are overfishing to drown them.

There’s also another aspect of Iara which shows her as a goddess of love. Very much like the Orisha Oshun, or even the Greek goddess Aphrodite, Iara fills everyone’s heart with love.

It is said that Yara was a formidable warrior and hunter. She was the best one around and her brothers were jealous of her skills. As they couldn’t get better than her, they plotted to kill her! But Yara was wise, and she noticed the plot, killing her brothers first.

Her father got so nervous that he tried to kill her himself, throwing her in a river. Different kinds of fishes came and rescued her, taking her to the bottom of the river and rewarding her with special powers. She became a goddess and she started protecting the fresh waters.

Her importance is so big that, recently, she appeared on the news. A new virus was found in Lake Papulha, Belo Horizonte. Scientists described the virus as “alien” for its structure is totally unlike any other viruses. The most interesting part of this discovery is that the virus was named Yaravirus by Professor Jônatas Abrahão, for it was discovered on a lake, the domain of Yara. 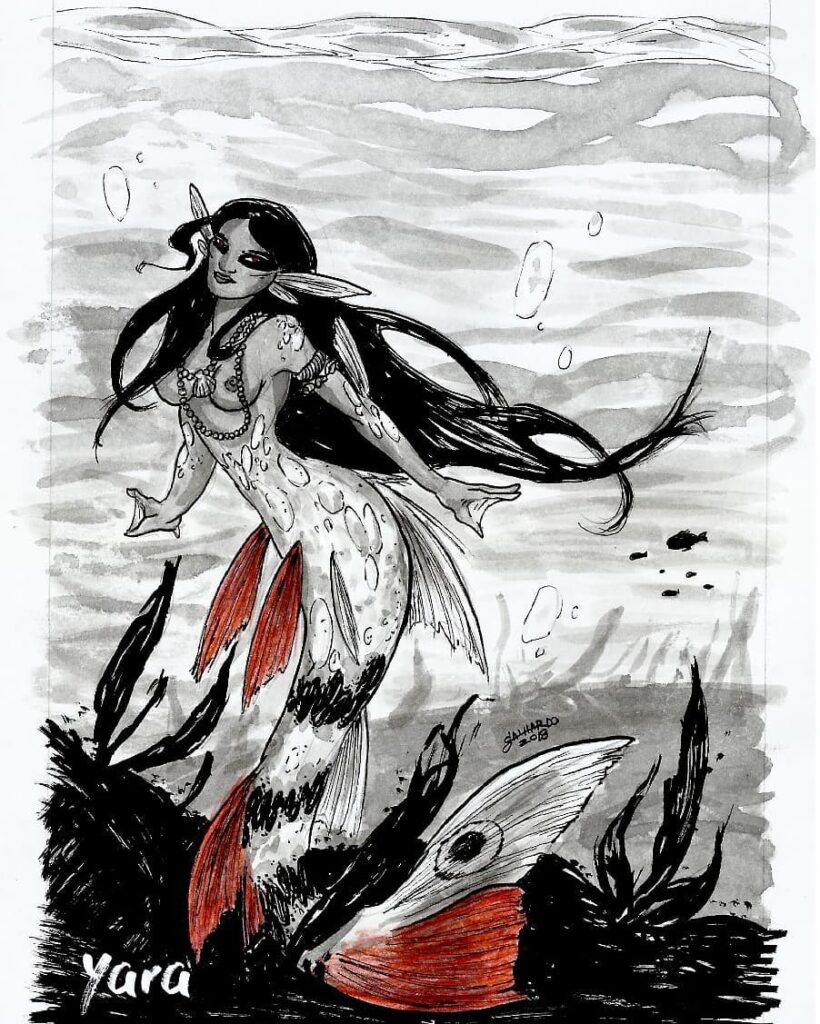 Yara by @galhardo_art, used with permission.

Portuguese “colonized” Brazil from 1500 on. Later then, around 1540, they brought slaves from Africa. Apart from being enslaved, they were also obliged to abandon their faith in their gods. However, they were smarter and they kept most of their beliefs.

With time, they made some syncretism with the Catholic religion. Thus, two religions became very popular here and they are Umbanda and Candomblé. Both have their roots in the African customs and they rely on the magic of the Orishas, deities and spirits who carry and represent the powers of nature in Yorubá mythology.

Considered to be the mother of Orishás, Yemanjá is the most prominent deity of all of them. She is a mother goddess who protects everyone, mainly children, women and fisherman.

On February 2nd, thousands and thousands of people make their offerings to Yemanjá around Brazil. They all wear white and blue clothes and they carry boats with Yemanjá statues, treats and gifts towards the sea.

Once they arrive at the seashore, they send the boats adrift to Yemanjá and they ask for protection and fertility in return.

Although Yemanjá is an African deity, due to this syncretism process, it is pretty common to find her depicted as a pale-skinned woman. And, when this happens, she really bears a “Virgin Mary-ish” image.

In Salvador, Bahia, there is a monument dedicated to the Orishas. It’s called “Dique do Tororó”. Among the Orishas there, we can find Yemanjá and another mother Orisha: Oshun.

Dique do Tororó in Salvador, Bahia By Germanramos, CC BY-SA 4.0

While Yemanjá reigns over the salt waters, Oshun, one of her daughters, reigns over the fresh waters. Oshun is the goddess of love and also fertility. She is the one who teaches her children how to control their emotions and desires. She also teaches how to value ourselves and how to apply self-love.

Oshun is always depicted wearing a yellow dress and holding a mirror, in which she is always admiring her own beauty. Sometimes she is also depicted as a pregnant woman, reinforcing her ability to give and sustain life.

It is said that she was always a curious woman and that nothing could stop her when she decided to have or to learn something. So, one day, she decided to learn how to read the Búzios, a type of divination method very common in Africa and in the religions such as Umbanda and Candombé cited above.

However, Ifá (the Orisha of divination) and Eshu (the trickster Orisha) refused to teach her, so she aked some sorcerers to help her and, in the end, she tricked Eshu and learnt the power of divination.

Today, the “Children of Oshun”, pray for her and ask for love, beauty, prosperity and protection.

In Porto Alegre, a capital in the south of Brazil, we can find a huge statue of Oshun and every year, on the 8th of December, people throw a big party for her.

Our Lady of Aparecida: Mother of Miracles

In Catholic religion it is pretty common the appearances of Virgin Mary around the world. In each place she manifests, she gets a new name that is linked to the place itself or to things she does. For example, we have “Our Lady of Fatima” who appeared to three children in Fatima, Portugal in 1917.

Here in Brazil, we have one of these manifestations which led to the construction of the biggest Catholic cathedral in the world, after the Vatican. This tale is known as “The Appearance of Our Lady”.

According to the tale, some fisherman decided to fish on the river Paraíba do Sul and serve a feast to a count called Dom Pedro de Almeida who would be visiting their city, Guaratinguetá. They knew however that it was not the fishing season, so they prayed to Mary for some help.

During the whole day, they caught no fish. When they were about to give up, they threw their net and caught a headless image of Mary. Then, throwing the net again they caught her head. Right after this, they had abundant fish for the feast, more than their small ship could handle.

After coming home, their story became popular throughout the whole country and people started visiting the image of Mary and praying for miracles. Even the prince and the princess — Brazil was still a Monarchy — visited the image.

In 1888 the temple was inaugurated and until today it expands. It became a centre of pilgrimage and people from all over the country go there on foot to offer prayers and gifts and to ask for miracles. 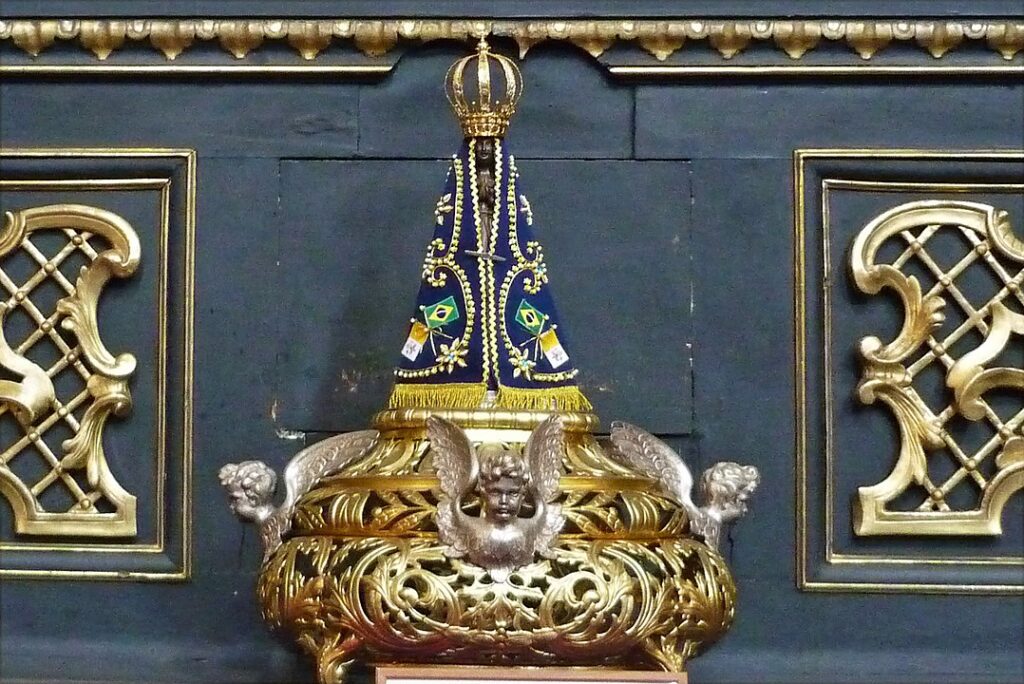 We’ve got many other references to “mothers” in our culture, but these ones are the biggest ones. Are you familiar with these stories? Please do share your thoughts on Twitter!