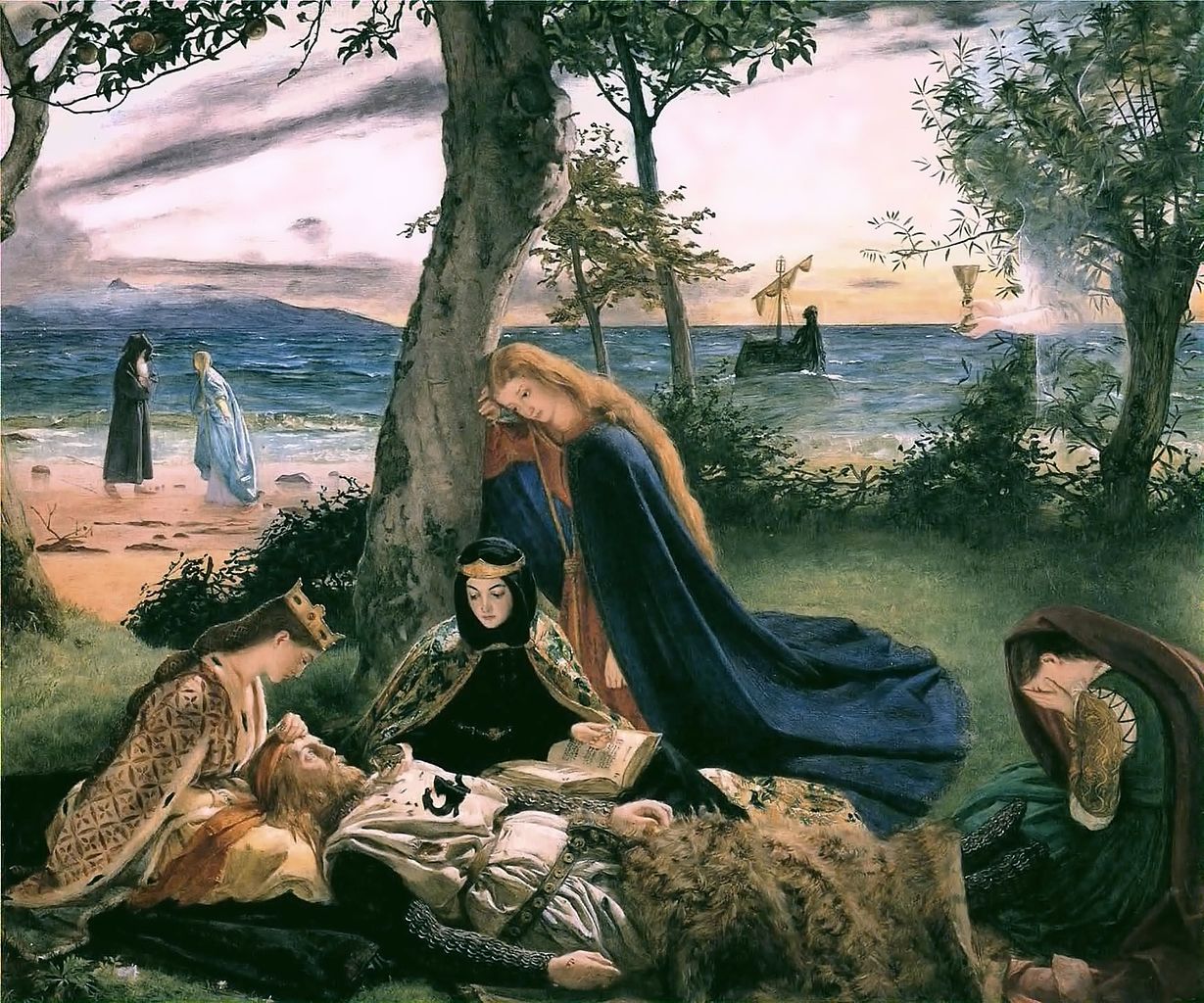 A brilliant professor once told us that desire always lurks at the heart of Arthurian legends. Desire for glory, for love, for kingdoms, for power over one’s own life. While the desires of Arthurian women often led to unflattering depictions (depictions that feminist retellings of the legends strive to rehabilitate or explain with a backstory), they also make them some of the legends’ most compelling characters. This is particularly true when magic is involved! With this in mind, today we offer a discussion of our top five most magical women of Arthuriana.

The princess Isolde also goes by Isuelt, Yseult, Isotta, and many other names besides, but perhaps her most famous incarnation is “Isolde of Ireland.” In the Irish tradition, Isolde is a healer, and her fate is forever altered when she heals a young man named Tristan. Her marriage to King Mark of Cornwall is doomed before it even begins when she and Tristan (accidentally) drink a love potion meant for Isolde and her future husband. An affair unfolds between the new queen and Tristan (who, by the way, is King Mark’s nephew!), and it usually ends about as badly as you’d imagine.

If any of this rings some Guinevere-Lancelot-Arthur love triangle bells, it definitely should! But Tristan and Isolde likely predate this more famous couple, with their tales circulating since at least the twelfth century.

We’d hate for Isolde to be written off as merely the victim of a love triangle and a disgraced wife. To us, she’s most memorable for her healing abilities, which walk a fine line between practical and magical. She’s capable and skilled. And for this, we celebrate her!

The most famous figure on this list, Guinevere also appears in legend and literature as Gwenhwyfar, Gwenivar, Guenevere, and more. The Queen of Britain through her marriage to King Arthur, Guinevere, like Isolde, is most known for her relationships to the men around her. She is the wife of King Arthur and the lover of Lancelot. While she’s extended more sympathy in contemporary retellings, her infidelity has often been regarded as the catalyst for Camelot’s downfall.

Representations of Guinevere range from gracious lady in the romances of Chretien de Troyes to evil traitor in the lais of Marie de France. One of her earliest appearances is in Geoffrey of Monmouth’s History of the Kings of Britain. She’s occasionally magical or prophetic (and sometimes even put into a very Sleeping Beauty-like enchanted sleep!) We think it’s a shame that she’s so often remembered for what she lacks: children and a happy marriage. But more and more authors and creators are revitalising her, amping up her magic and creating interiority for this passionate queen. In recent adaptations, she’s been a tamer of unicorns, a fierce warrior, and even a changeling.

Number 3: Elaine / The Lady of Shalott

It’s hard to believe, but there are actually seven different Elaines associated with Arthurian legend. But the most famous Elaine is Elaine of Astolat, a woman who falls into unrequited love with Lancelot. Versions of Elaine of Astolat’s story appear in Sir Thomas Malory’s Le Morte d’Arthur, Alfred Lord Tennyson’s Idylls of the King and “The Lady of Shalott,” poetry by Letitia Elizabeth Landon, and a story by Andrew Lang!

In Tennyson’s “The Lady of Shalott,” Elaine is portrayed as a mysterious fairy woman imprisoned in a tower where she is under a curse. All day she sits and weaves the world she sees through her magic mirror, because she is not allowed to leave the tower or look through its windows. But when she spots the ever-so-handsome Lancelot, she falls instantly in love with him and whirls to face the window. Her mirror shatters. Leaving the tower for the first time, the Lady of Shalott lays down in a small boat and dies as she floats to Camelot. Though she is a creator, a weaver, and a mistress of magical tools, Lancelot remarks only on her “lovely face” when he sees her. Despite her tragic end, Elaine has an aura of magic about her, and she’s been a lightening rod in discussions about feminism, art, and autonomy.

Number 2: The Lady of the Lake / Nimue / Vivien

If you’re a Monty Python fan you know this woman as the “strange” one who “lies in ponds,” “distributing swords,” but The Lady of the Lake, sometimes known as Nimue or Viviane/Vivien, is a powerful enchantress.  In many Arthurian stories, she is the one who chooses Arthur as the King of Britain and gifts him Excalibur. She is also frequently the mother, or at least foster mother, of Lancelot – as early as Chritein de Troyes’s Lancelot, the Knight of the Cart from 12th-century France, Lancelot is said to have been raised by a fairy in a lake. We like to think of her as an extra-legendary fairy godmother!

Sometimes, however, Nimue/Vivien is also depicted as the villain who ensorcels Merlin in a tree. This character loses her fairy godmother status and becomes a greedy or sexually suspect maverick. In Tennyson’s famous poem “Merlin and Vivien,” we see the “philosopher duped” motif, where a “bad woman” gets the better of a more powerful man. Here Vivien is a power-hungry temptress. In this tale, she traps Merlin in a tree in the forest of Broceliande in Brittany, thereby ensuring that he will not be there to help Arthur when Camelot starts to crumble. With twists like this, it is hard not to see the machinations of patriarchy in the fall of this once gracious figure.

We won’t lie to you, we have no chill about our favorite Arthurian character, Morgan le Fay. And it’s largely because she’s often depicted as a witch or fairy (“le Fay”!) or enchantress or even a magical hybrid that bridges these categories. She goes by many names, including Morgana, Morgan, Morgen, and Morgaine.

Intensely amoral in many versions, Morgan can help or hinder Arthur in his rise to power and his work as king. Though she’s often painted as villainous or duplicitous, early depictions of Morgan foreground her magic – and in these early stories, she’s generally benevolent, helping and even protecting Arthur.

Though she likely has roots in the Welsh/ Celtic tradition, her earliest textual appearance is in Geoffrey of Monmouth’s Vita Merlini, where she and her magical sisters rule as queens on the Isle of Apple Trees (Avalon). She also appears in early chivalric romances as a supernatural healer and Arthur’s elder sister.

Morgan is an intensely polarizing figure, and it’s no coincidence that she also wields the most autonomous power. She is a potent blend of magic, royalty, and ambition. We’re thrilled to see more and more texts that embrace her as a feminist icon rather than a sinister seductress.

This list provides only the tiniest sample of the wealth and scope of Arthuriana. We hope you’ll look at these captivating women – women who have moved through legend, poetry, music, and art for centuries – with new eyes and reconsider how they shape our ideas of what it means to be powerful, good, and magical.

Larrington, Carolyne, 2006, King Arthur’s Enchantresses: Morgan and her Sisters in Arthurian Tradition, I. B. Tauris.