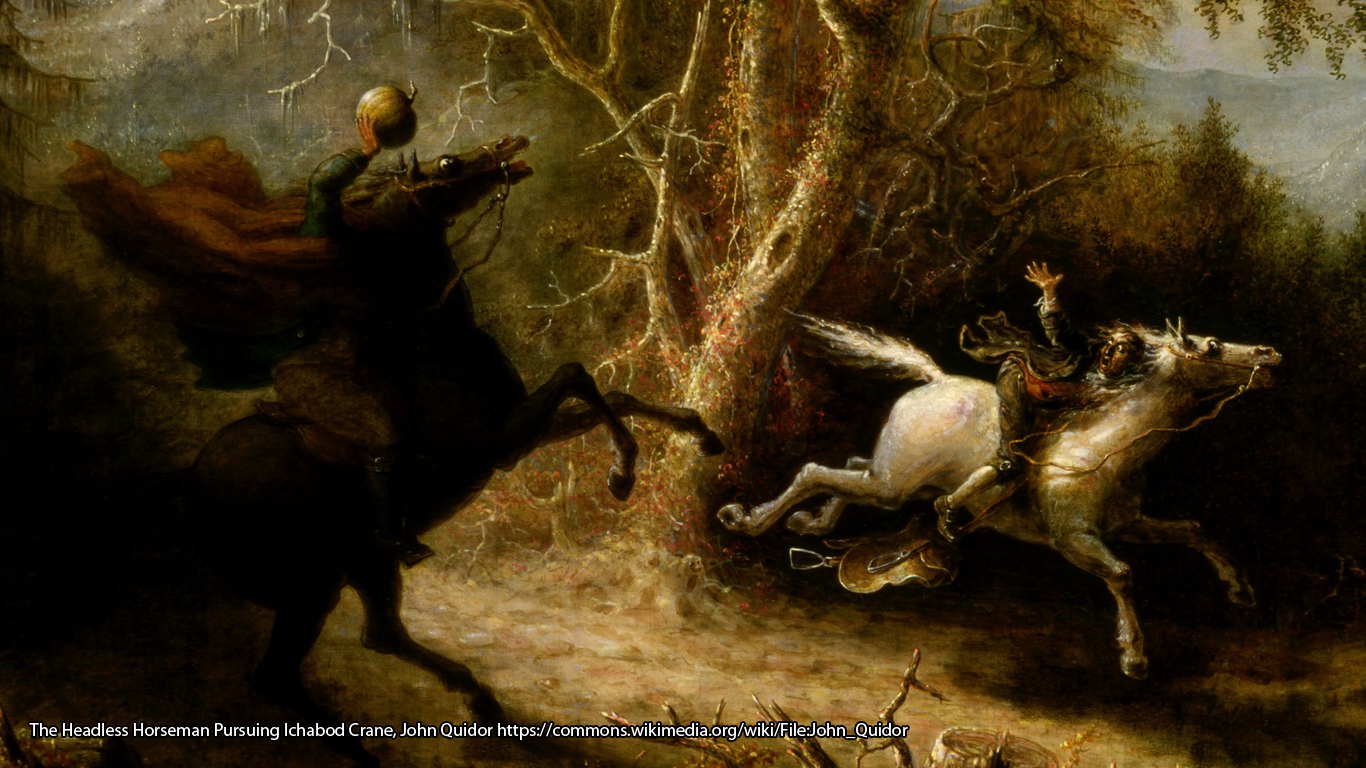 The Headless Horseman captures the imagination like nothing else at Halloween. Regional American history and urban legend influences the interpretation of this apparition more than supposed.

The Legend of Sleepy Hollow, written by Washington Irving, was published in 1820. Approximately forty-two years after the end of American Revolution and eight years after the war of 1812, scars from the war had not completely healed from collective memory. Although headless horsemen exist in Irish, German and other folklores, Irving’s story traces its origins to a mixture of the bloody American Revolution and the existing Dutch traditions of the New York region. It is that connection between the regional legend and its basis in history that creates an historic urban legend.

“Most of the folklore of early America was so fresh and raw that many cultivated writers rejected it in favor of the more romantic tales and ballads of Europe. Yet Washington Irving, who dearly loved the antique and quaint was one of the first to recognize the romance in the tall tales and rough practical jokes of the frontier.”

As familiar to most readers, Irving’s classic story of The Legend of Sleepy Hollow goes as follows:

A Connecticut teacher named Ichabod Crane accepted the position of headmaster in the village of Sleepy Hollow, New York — a Dutch stronghold in New York. The Dutch were perceived to be a people fond of ghost stories told around hearths and in the company of others. Sleepy Hollow was portrayed as being populated with both living and supernatural elements. In fact, the remote hamlet seemed to have fallen under some sort of enchanted spell.

Poor Ichabod is prone to believe in takes of the supernatural, getting his fill at the shared firesides of local houses. It was a New England custom of the time that local families provided rotational board and keep for their school teachers. During one of those stays, Ichabod learns of Sleepy Hollow’s most troubling tale — the ghost of a Hessian soldier who lost his head during the American Revolution. The troubling ghost remained in search of his head and frequented the old church road and yard where he was believed to have been buried.

As fate would have it, Ichabod has a student; the lovely Katrina Van Tassel. The only child of a prosperous farmer named Baltus Van Tassel, Ichabod imagines himself in love, but whether his affection stems from the flirtatious beauty or her fortune is a bit more difficult to ascertain. Katrina is also the object of a local lad’s attention, the athletic and virile Brom Van Brunt who is also known as Brom Bones. When Brom learns that Ichabod has decided to woo Katrina, Brom defends his own interests. The fact that the scholarly and gangly Ichabod refuses to be drawn into physical confrontation in the manner of the frontier (with his fists), forcing Brom to resort to other means to drive the Yankee school master away.

There comes a time when Ichabod receives an invitation to a party at the Van Tassels. He leaves somehow disappointed by Katrina. Alone on the eerie road home, his imagination starts to run wild. He passes Major Andre’s Hanging Tree (Revolutionary War participant – British), another haunted landmark. Near that disturbing tree, he spies a figure who fails to respond to his greeting. The figure, mounted on a big dark steed, falls in behind Ichabod. The teacher tries to shake him off, to no avail. Before long, he realizes the rider has no head on his shoulders but carries it on the saddle before him. Confronted by this horrible spectre, Ichabod urges his horse on as fast as the old horse can go. They all reach the churchyard almost at the same time: beyond is a bridge which local legends claims the Headless Horseman does not cross. Ichabod manages to cross to safety, but he makes the mistake of looking back when he reaches the other side. The apparition throws his head at Ichabod, knocking him from his horse.

The following morning, Ichabod’s horse returns to the farm, and all that is found of Ichabod is his hat and a smashed pumpkin. Whether the teacher ran off or was captured by the Headless Horseman was the point of much local debate.

But does Irving’s story have origins in either history or regional folklore? The answer is yes to both.

It is a known fact that Hessian mercenary soldiers fought for the British during the Revolution.  The area near Sleepy Hollow was contested ground where two relatively important battles were fought: the battles of Manhattan and White Plains.

September 17, 1776 General William Howe ordered a regiment of Hessian mercenaries under Colonel von Donop into battle at Manhattan. The American’s fled in disarray (some say terror) at the oncoming Hessians. Reports of Hessians bayonetting retreating/surrendering American soldiers at Brooklyn Heights were widely believed and added to the already existing terror surrounding the Hessian mercenaries. A British Officer (whose name has been lost to history) later recounted,

“Our Hessians and our brave Highlanders gave no quarter, and it was a fine sight to see with what alacrity they dispatched the rebels with their bayonets.”

General Howe again let loose his Hessians on October 28 in White Plains, NY.  After brutal battles, the Americans retreated. On October 31, both armies regrouped, and General William Heath wrote “…an artillery shell took of the head of a Hessian artillery man …” It is quite possible this is the event that prompted the origins of some of the local lore that Washington Irving encountered. It is widely believed that the unfortunate Hessian was buried at the Old Dutch Churchyard in Sleepy Hollow, about nine miles from White Plains.

It is quite probable that Washington Irving drew upon both history and local legend to create The Legend of Sleepy Hollow. While headless horsemen are known in Europe prior to the settling of the United States and the American Revolution, the Headless Horseman of Sleepy Hollow has captured the collective imagination and has been doing so since it was first published in 1823. Of course, the Disney movie popularized it all the more in 1949. Nevertheless, this melding of history and folklore created an early form of urban legend that is celebrated to this day.