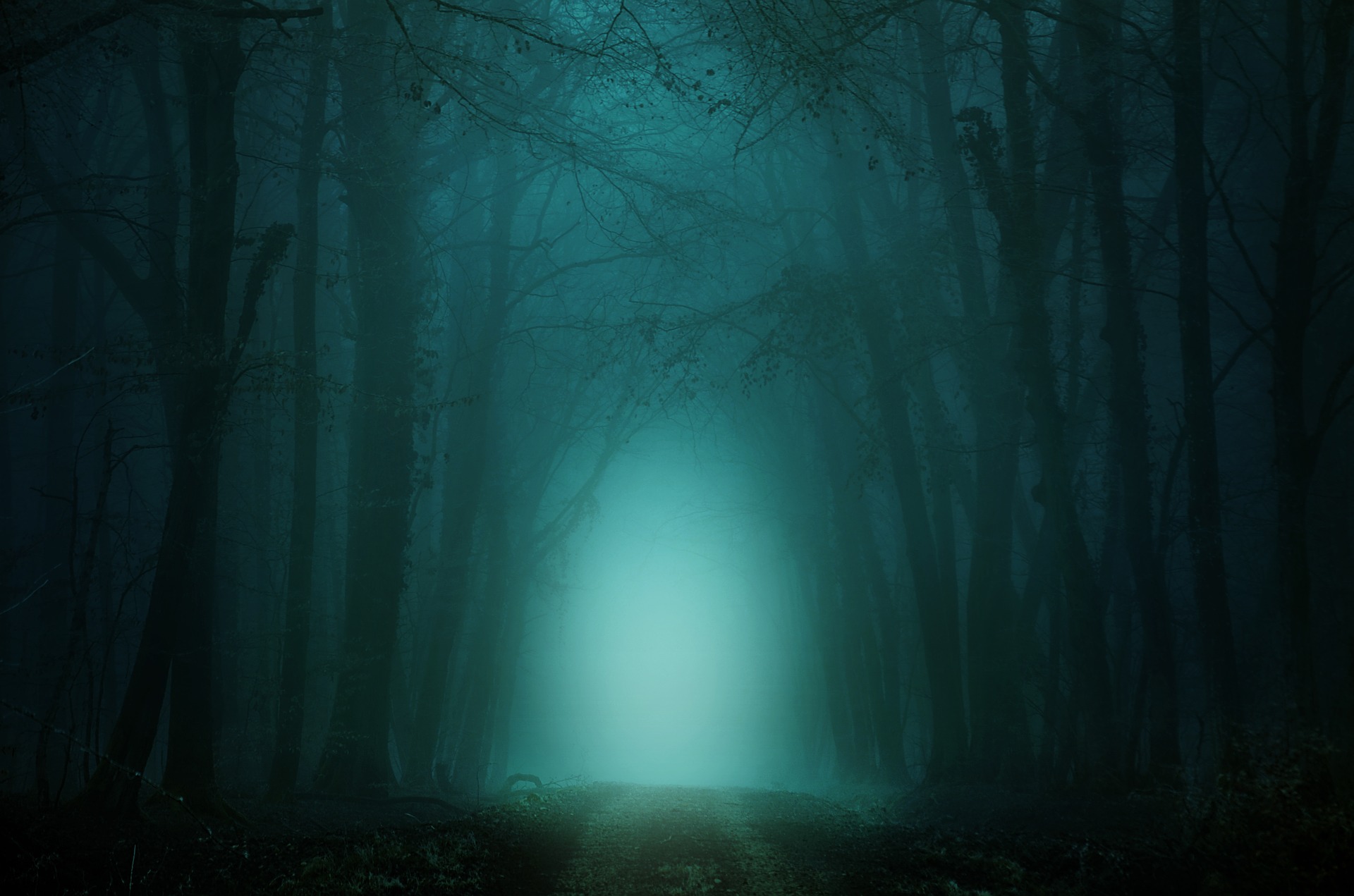 Imagine that it is winter in Sweden. New Year is approaching. You are standing outdoors in the middle of the night. It is cold, and the ground is covered with a thick layer of snow. All is silent around you, except from the sound of the chilling winds. You wrap your jacket firmly around you to protect yourself from the cold. What was that, did you just hear a noise from behind you? You turn around, and all of a sudden, you see that something is approaching, moving towards you. You stare in that direction and notice a pair of glowing red eyes and discern the silhouette of a creature in the distance, the size of a large dog, or maybe it is a boar? You panic when you realize that the shape is rushing towards you at full speed. When it comes close it becomes clear that it is indeed a big pig, but one with burning eyes, white skin and a sharp back, formed like a sawblade. It runs straight at you and quickly comes between your legs, with the result that it will cleave you in two halves.

What you have just met is a special type of ghost pig, known from many stories, primarily from southern Sweden. It is a supernatural being that is known by many names, such as Gloson, Gluffsoen, Glosoen, Glopsuggan, Luffesoen, or something similar. The name Gloson (the most common designation) might be derived from the verb att glo (to stare or to shine) and so, sugga (sow). In this short text, we will look more closely at this charming ghost pig. Why pigs? Pigs have been shaped by their long and complicated relationship with humans, both as species and symbolically. Even domesticated pigs used to roam the bush freely in the countryside and could be sometimes be aggressive and dangerous, especially if they had piglets. Another risk was of course wild boar, which were even more terrifying and hazardous. Even today, people avoid wild boars and there are occasional reports of people injured by boars in the wild. In popular culture, aggressive pigs or boars inspire horror motifs in many movies, computer games and books. There is even a slasher movie from 1984, Razorback, where a massive boar leads a back of aggressive and cannibalistic wild boars in Australia, attacking humans, which partly builds on the fear of feral pigs/boars. The designation ‘razorback’ is also common for a certain type of thin-bodied and long-legged feral hog in the southeast of the United States.

In the folklore archives in Sweden, there are hundreds of accounts that mention different types of supernatural pigs. Some of the pigs are not really the same as Gloson. Other supernatural beings could also take the shape of a pig, for example a murdered child that comes back to haunt the living (this type is usually called Gravso ‘Grave Sow’), or the first sacrificed being when a new church is built (this type is called Kyrkogrim ‘Church Grim’, and sometimes appears as a pig). But in this text, we will look at Gloson. This supernatural being is usually associated with a ritual known as årsgång, ‘year walk’, a kind of perilous folk divination that could be performed during Christmas or New Year but was sometimes also associated with other seasons, such as Midsummer (for more on the year walk ritual, see Kuusela 2016).

Let us start from the beginning, depending on where you think things start, because that can always by a tricky thing to decide when it comes to folklore. If we leave out theories that argue that Gloson is related to different boars and pigs from Old Norse mythology (i.e. the god Freyr’s boar, Gullinbursti) or to Pre-Christian fertility rituals, then a good place to start is a curious text written by Petter Rudebeck, Antiquities from Småland, published 1697–1700. One chapter deals directly with the year walk ritual, something he thinks of as an old custom; he describes the ritual and how it culminates in a meeting with an old man on horseback. According to Rudebeck, the old man shows himself on the seventh year for someone who repeats the year walk annually. This man is clearly supernatural and is described as sitting on a horse with flames around its head, and carrying a stick with rune carvings in his mouth. I believe that this man, who echoes notions of the Old Norse god Óðinn, fills the same purpose as later accounts of Gloson. In the later descriptions of Gloson, it is this being that carries a rune stick in its mouth and challenges the year walker in a similar manner. As with any sort of folklore, the accounts, the details and the explanations may vary.

Even though there are other descriptions of the year walk ritual from the 17th and 18th century, it is from the 19th century that we find the most detailed depictions of Gloson that most clearly links it with a ghost pig. Descriptions of Gloson are usually filled with all kinds of horror motifs. One account says: “Gloson was horrible. It had one hundred eyes over its body, shining like vile fire”. Usually, she (remember, it is a sow) is said to be a pig in the form of a horrible sow with a back in the shape of a razor-sharp saw. Sometimes she appears accompanied by several piglets. A common motif in the legends is that Gloson runs at the year walker at full speed, and seeks to come between the year walker’s legs and cleave the walker in two with her razor sharp back. But in some records it is said that she could also carry a year walker far away on her back. How long the ride took varies, roughly from 7 weeks to 3 years, with the result that the rider could become bewildered, insane or even die from exhaustion. Sometimes the motifs are combined so that the one who is carried away on her back will be massacred by the saw during the hard ride. Sometimes it is enough to be touched lightly by the Gloson for bad things to happen. One account speaks of such a meeting: “And now she [a maid] could see Gloson, large as a steer, rush by. Fortunately, she had moved out of its way so that it only touched the hem of her dress; but just the encounter was bad enough and a short while afterwards, she became ill. If Gloson had touched her, or more of her dress, then there would have been no cure for her, for being touched by Gloson causes certain death.“ Thankfully, there are various means of protection: to cross one’s legs (this will be a reminder of the holy cross), feeding Gloson certain prepared objects, such as seven-year-old nuts (magical nuts); throwing a fishing net over her; or using knowledge of the black arts. Some records – albeit this is quite rare – describe Gloson as anthropomorphic: “She looked like a human, but she had a pig’s head and long, sharp tusks, and was unpleasant to look at.” Maybe this ambivalence about the similarity of the pigs and humans is a motif that we can also find in the far older legends of Circe’s transformation of Odysseus’ followers into pigs, mentioned in Homer’s Odyssey, Ovid’s Metamorphoses and Plutarch’s Gryllus? Pigs have frequently been used symbolically to bestialize and dehumanize others, a practise that exists up to this day.

One constant in the records of year walk is the importance of time and direction. The encounter with Gloson usually takes place close to the church and at a certain liminal day of the year, and only after a certain ritual has been performed to make the year walker sensitive to the supernatural world. The ritual was accomplished at midnight or before dawn, and movement had to be performed in certain ways, usually counter clockwise. There is plenty of evidence that points to the importance of calendar divination, where a large body of beliefs and customs are based around a particular date or period. The calendar combines the religious, the cultic, and the practical. Year walk can be seen as one of many possible expressions of this: It served a desire to lift the veil of what is hidden and unknown and cross the barriers of space and time.

The purpose of Gloson was to hinder the year walker from accomplishing his or her goal. It was one of many supernatural interferences that was to be expected before the year walker could prove his or her worth and become sensitive to the supernatural and be able to get a glimpse of the coming year. Gloson could also serve another purpose: A theme that can be found in many folklore accounts is that she carries a rune stick, paper roll, or a book in her mouth, and if the year walker manages to grab this, either through swiftness or by overturning her, the item could be used to instruct the year walker in sorcery. I would argue that these types of legends are supposed to give a logical reason for how someone comes into possession of a black book (another far more common way was to sign a contract with the Devil).

Nowadays, it might be hard to grasp the aspects and need for something as mysterious and strange as a year walk. This has, among other things, to do with rapid urbanisation and different worldview. The village communities have dissolved, and the villages have expanded into rural centres at such a pace that contemporary people cannot apprehend the way in which older generations were bound to the village community and traditions in all aspects of life. People viewed life in a different way and lived in fear of the supernatural: the world abounded with unpredictable events that were frequently explained as being caused by unseen, unpredictable, and supernatural beings and influences; good and ill luck; fate; and so on. Gloson was one such dangerous and unpredictable element. Be careful when walking outdoors on a cold winter night, you never know what lurks out there, in the dark.

Tommy Kuusela is a PhD in History of Religions and works as a researcher and archivist at the Department of Dialectology and Folklore Research in Uppsala (The Institute for Language and Folklore). The archives of the Institute for Language and Folklore houses one of Sweden’s largest folklore collections. Kuusela has written more than 25 articles on different topics: Scandinavian folklore, Old Norse religion, animal studies and Tolkien studies. Read more of his work here and here.