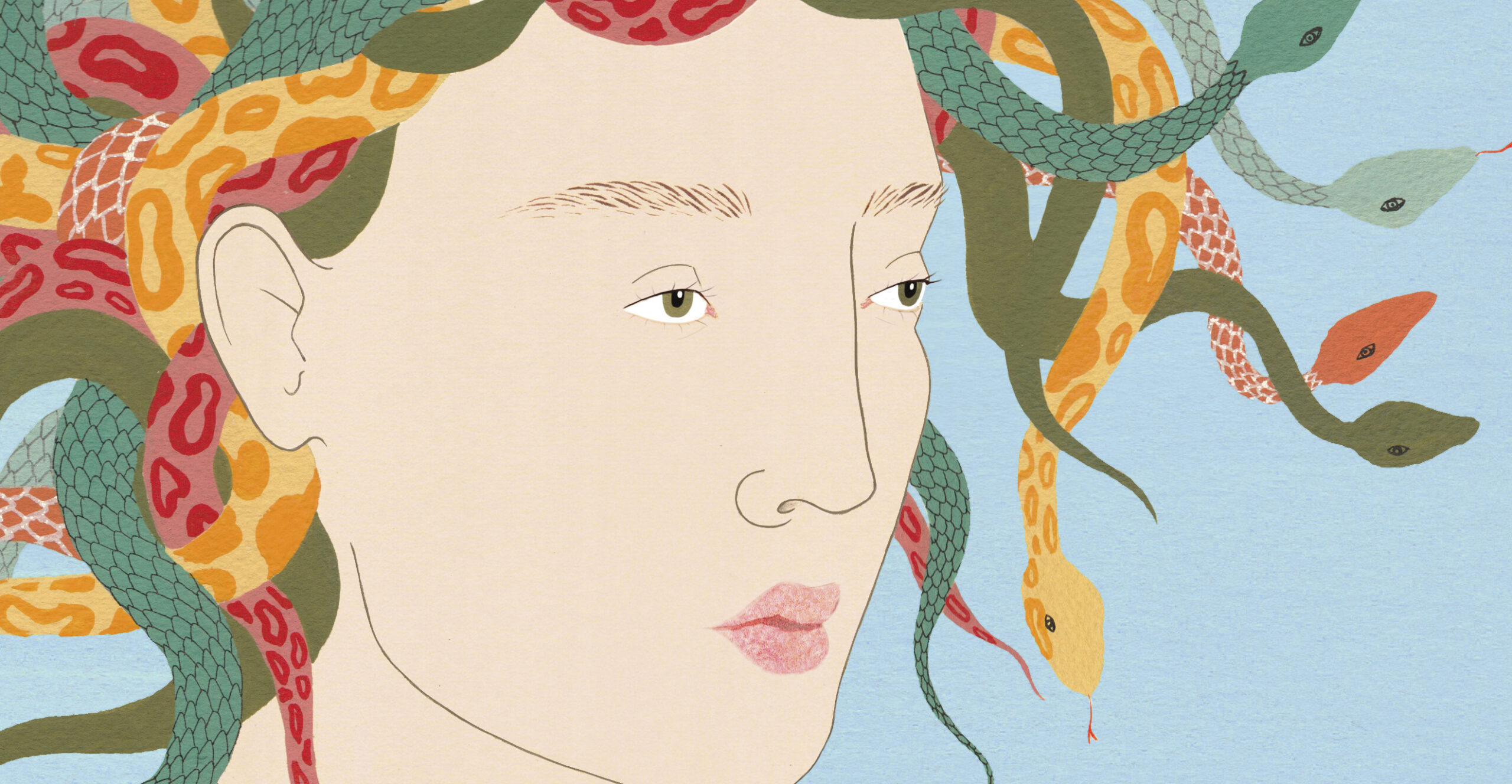 Heroines, rebels and provocateurs; these powerful goddesses’ stories will fire your imagination and give you fire in your belly. Warriors, Witches, Women: Mythology’s Fiercest Females is a new book by Kate Hodges, illustrated by Harriet Lee-Merrion.

The first witch of Western literature, Circe lived what appears to be an idyllic, solitary life on the island of Aiaia. She spent her time honing her enviable magic spells, collecting herbs from the thick forest that fringed her land and doting on her magically docile pet lions and wolves.

She is most famous for her role in Homer’s Odyssey. When Odysseus’ party seeks shelter at her mansion, she entertains them hospitably, flirting, feeding them, singing and encouraging them to forget their wives and homes, then, in a flash, turns on them, waves her wand and transforms them into pigs. Odysseus uses a herb to shield himself from her enchantments, and (according to his account), Circe shares her bed then falls in love with him. He stays on the island for a year.

Despite her immortality and enchantments, Circe is mortal. Although she is described as a goddess by some, her powers are self-taught: she has to work at them and practise like a human. She uses her body as a negotiating tool, she transforms men from human to beast and becomes a mother. She’s an earthly witch, fallible, but happiest on her own with her pets and her herbs. No demands, no obligations, no having to fulfil society’s requirements. She is, perhaps, just a woman who needs, in Virginia Woolf’s famous words, ‘a room of one’s own’.

Alongside her male counterpart, Krampus, Berchta has her own Alpine parades, the early January Perchtenlauf processions. These parties bring together terrifyingly costumed people to scare away the cold winter spirits.

The medieval Berchta – sometimes a beautiful snow queen, sometimes an old hag – rewarded German women for hard work. Her punishments were harsh. Berchta might tear you from your bed, rip open your belly, pull out your guts, stuff the cavity with straw and rocks and then stitch your stomach up.

Folk tale collector Jacob Grimm was fascinated by this wild, forest-dwelling creature. He believed she had been around since at least the tenth century and he stripped away the witch caricature that he believed had been imposed by the Church to discover a more layered character beneath.

He describes her at the head of the Wild Hunt, a furious ride, peopled with demons, spirits, witches and the souls of unbaptised children, who galloped across the skies, waging war with other gods or bringing abundance to the earth, and told how Berchta and her associated goddesses were particularly associated with the spirits of dead children.

Although tourists flock to join the demonic parades held in Berchta’s name and know her as evil, perhaps it’s time to look beyond the animal masks and horns, and the tales of stomach-ripping and see the goodness beneath. There is something wildly romantic about the original Snow Queen Berchta, with her serene beauty and deep love of children.

Mami Wata was not originally singular. She was ‘they’, a pantheon of watery deities found in West, central and southern Africa, as well as in the African diaspora in the Americas and Caribbean. Mami Wata were overwhelmingly female, usually portrayed as half-human, half-fish creatures powerfully aware of their own beauty.

From the fifteenth century, European traders took her story across Africa as they travelled. Mami Wata became associated with wealth. Tales of her money-oriented deeds were innumerable. She snatched unwary swimmers, who, when released, they were more attractive and had more cash. She had her own, distinctive form of worship; her followers created altars groaning with European goods and revelled in trance dances.

As thousands of enslaved Africans were torn and stolen to work on plantations across the Atlantic Ocean, they took Mami with them, blending their various beliefs with Christianity. People working unpaid in brutal conditions would perform the trance dance to get them through their harsh days and also as a healing ritual. By the seventeenth century, Mami Wata had mutated into new, localised goddesses across the new world, including  Watra Mama, La Sirène and Yemanja.

Mami Wata has remained a popular and commercial icon; she has been ‘creolised’ – blended with modern culture.  Her confidence and kindness and connection to Mother Africa give her extra dimension for her newer fans. The intriguing juxtaposition of this ancient, culturally and politically resonant goddess with her altars laden with objects more associated with Western capitalist society – designer sunglasses, cans of Coca-Cola, handbags and expensive make-up – makes for powerful imagery, imagery that has been seized by stylists, pop stars and artists.

Even today, many Hawaiians believe that Pele, the feared and revered deity of lava and volcanos, lives in the Halema’uma’u crater of the Kilauea peak on The Big Island. Each eruption on the island signifies Pele crying out for her true love. This strong, yet emotionally vulnerable goddess reserves particular ire for those who take pieces of lava from her precious volcanos, casting bad luck on the rock thieves. She is passionate about preserving her country.

Pele was born to Haumea (the goddess of fertility and childbirth) and Kane Milohai (the creator of the sky and heavens) in Kuaihelani, a mystical floating island. As a child, Pele’s emotions always bubbled near the surface; she was passionate, jealous and capricious. When she was banished from the island, she, along with members of her family, made her way to Hawaii, creating and hewing natural features into the landscape. Eventually, after a fight with her sister, she was torn limb from limb, her bones forming a mountain. Her spirit flew on, however, and created a home in the Halema’uma’u crater at the top of the Kilauea volcano.

She is still very much present today. When the mountain starts to rumble – it’s one of the most active in the world – you’ll find offerings to the goddess, flowers, money, incense, stuffed in the cracks near the summit of the volcano.

Pele is an inspirational figure; passionate, incredibly strong, a goddess, but with an emotional, human side. Perhaps it’s this that ensures she’s still worshipped as a strong, vital goddess, still as venerated today as she was thousands of years ago – just like a volcano, she is unconquerable.

According to The Origin of Tara Tantra, Tārā was first known as Wisdom Moon, a devout princess. The bright, sparky royal studied hard, made dutiful offerings and was close to reaching enlightenment (achieving the higher knowledge of a Buddha). At last, she came before the Buddha and took her bodhisattva vow.

It became apparent to the monks present that Wisdom Moon was something special. They explained that if she prayed to be reborn, reincarnated as a man, then she might attain enlightenment. Tārā refused. And so she was reborn in female form, going on to meditate for 10,100,000 years, and consequently to release the same number of beings from the bondage of their worldly minds. Through this toil she became a goddess – Tārā.

In another Tibetan Buddhism tale, Tārā sprang from a lotus that grew in the tears of Avalokitesvara, the compassionate Buddha. Tārā offered to help him ease the pain of the world, gaining her can-do reputation.

Tārā takes many forms. In some strands of Buddhism, she has twenty-one guises, each associated with a different colour and with different characteristics. Thus she embodies the complexities of many women’s lives, balancing home and work, being assertive or caring, rent maker, homebody, fighter, protector.

Tārā’s tale has inspired women across thousands of years of Buddhism. She has served to encourage Buddhists to not just sit and meditate, but to get up and do. Ultimately, there’s something very earthly and real about this goddess who not only insisted on staying in her female form, but serves to embody the complexities and can-do spirit of women everywhere.

Heroines, rebels and provocateurs; these powerful goddesses’ stories will fire your imagination and give you fire in your belly. Warriors, Witches, Women: Mythology’s Fiercest Females is a new book by Kate Hodges, illustrated by Harriet Lee-Merrion, and published by White Lion Publishing. Available from all good bookshops and online.

‘Meet mythology’s fifty fiercest females in this modern retelling of the world’s greatest legends.
From feminist fairies to bloodsucking temptresses, half-human harpies and protective Vodou goddesses, these are women who go beyond long-haired, smiling stereotypes. Their stories are so powerful, so entrancing, that they have survived for millennia. Lovingly retold and updated, Kate Hodges places each heroine, rebel and provocateur fimly at the centre of their own narrative.

Players include:
Bewitching, banished Circe, an introvert famed and feared for her transfigurative powers.
The righteous Furies, defiantly unrepentant about their dedication to justice.
Fun-loving Ame-no-Uzume who makes quarrelling friends laugh and terrifies monsters by flashing at them.
The fateful Morai sisters who spin a complex web of birth, life and death.
Find your tribe, fire your imagination and be empowered by this essential anthology of notorious, demonised and overlooked women.’

*Sign up for the #FolkloreThursday newsletter to enter our competitions (valid July & August 2020; UK & ROI only).

Kate Hodges has over 25 years writing experience on magazines, having been a staffer on publications including The Face, Bizarre, Just Seventeen and Sky, and written for many more, including Smash Hits, Kerrang! and NME. She has also worked for Rapido TV, makers of cult show Eurotrash, luxury brand marketing company Noir Luxe, and P For Production films. She writes part-time for The Green Parent magazine. Her first ‘proper’ book, Little London, a guide to free and cheap, family-friendly things to do in the capital, was published in 2014. Her second, London in an Hour, came out in 2016, and Rural London, in 2017. Her fourth book, I Know A Woman, was published by Aurum in February 2018. She lives in St Leonards-on-Sea with her two children. In her spare time, she plays in bands Ye Nuns and The Hare and Hoofe.