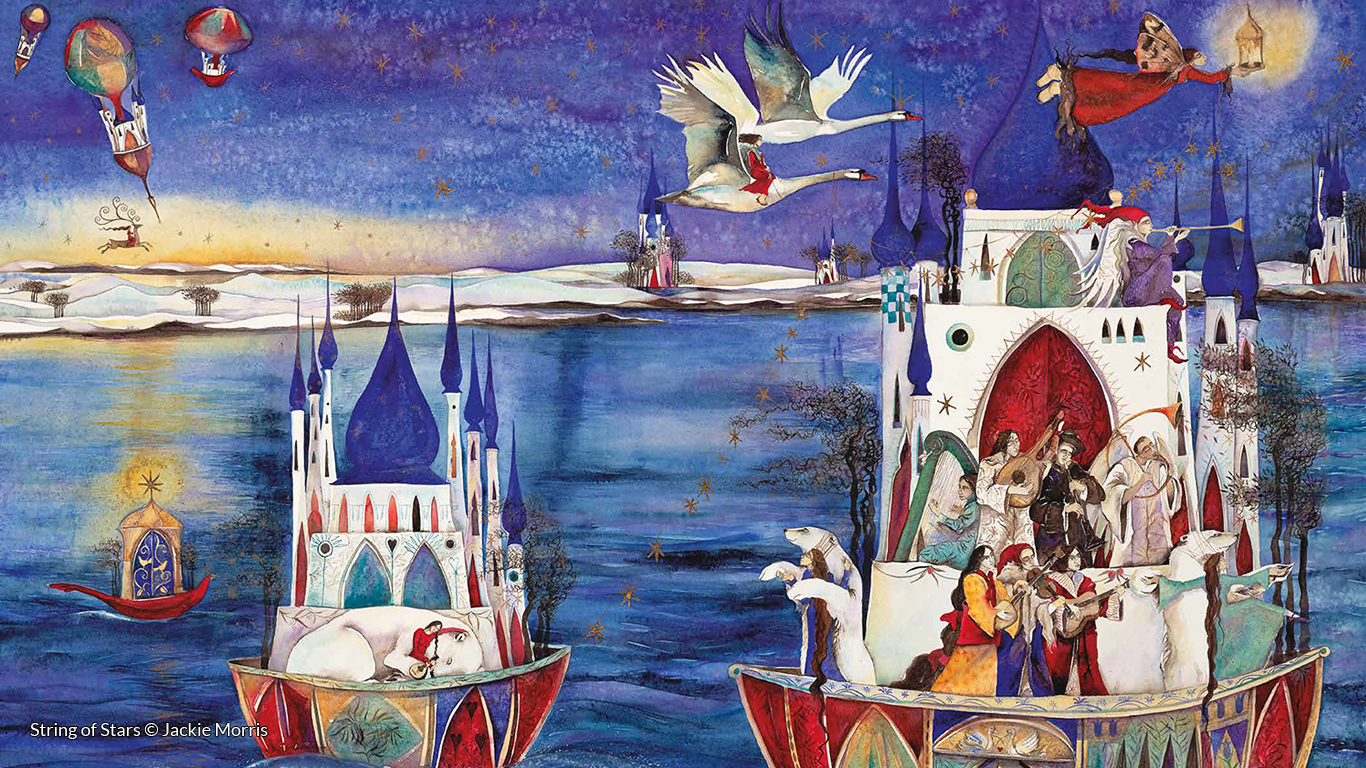 At present I am tangled in brambles and ivy, steeped in acorns and oak and painting the rhythm of the air as it moves through the feathers of a raven’s wing. I am working, as ever, on a new book, The Lost Words, written by Robert MacFarlane, illustrated by me, to be published by Hamish Hamilton in Sept 2017. It is about the importance and the power of words in our  world. And meanwhile I have six books out this year, including The Quiet Music of Gently Falling Snow.

So many of my books include journeys of one kind or another. So many are about refugees of one kind or another. No more so than this one. Its roots, like all stories, are various. The illustrations began as a series of Christmas cards painted over sixteen years for the charity Help Musicians UK. Graffeg, a small independent publisher with big vision wanted to do an art book with me. This series of paintings seemed a good place to begin.

Over sixteen years a strange world grew in the paintings I produced. Characters moved from year to year, card to card. And the cards themselves were sent in their thousands all over the world. The cards began to gather their own stories, connections made between those who sent them, received, later found cards.

For want of a better way to describe the book the stories are described as folk tales. They do have links with traditional stories. All of the images pay tribute to the troubadour- and while the book is a series of lullabies for grown ups, a harbour of peace, some of the themes grew from darker things.

String of Stars touches on the plight of the Griot people ( pronounced gree o). For centuries the Griots were the keepers of their people’s history. In a land without a written tradition the story of their people was passed through families in the form of song. Griots advised the leaders of the country and also sometimes stood in judgement as they were the history keepers. But then came a rebel Islamic group, who took control of the south of the country and banned the making of music and listening to music. Imagine a land that has lived through its song now denied that voice. Forbidden to sing on pain of death many have fled the land, taking their music to a wider audience.  When it is forbidden for a mother to sing her child to sleep with a lullaby for fear of affronting god, what kind of a god is that?

This isn’t the first time music has been silenced. And this one small section of Islam is not the only tiny part of a religion to fear song. Whenever there is war and conflict writers, storytellers, musicians, poets and always journalists, find their lives to be in danger.

As a species we are hard wired to learn through the medium of stories.

As a species we are hard wired to learn through the medium of stories. Stories and music play in the mind long after the story has finished, the song is over. If you wish to dominate a culture, take away its tellers of tales and singers of songs, remove or destroy its art, ancient and modern. If you can suppress its language.

In The Quiet Music of Gently Falling Snow musicians are the heroes. In String of Stars the people leave their home to find new lands across the water. They hope for a welcome. They find a land where people are thirsty for song and story. Here they teach, and here they continue to learn.

I had thought this would be an easy book to write. Whenever I painted an image a narrative had been running through my mind. But nothing worthwhile is ever easy. Weaving the threads and trying to make the stories sing, giving substance, but leaving space for dreaming – it was a challenge. Each year it became harder to find an image. Song of the Angel Cat only clicked into place late in the season when I found a curious tricycle horse in an antique shop in Ludlow. Winter Gathering came easier. The final painting almost comes full circle, but this time the journey is made not to flee tyranny, but from choice. It grew from a conversation with Nicola Davies and the phrase from a poem by Warsan Shire: “No one ever leaves home unless home is the mouth of a shark”.

So where did we learn from stories that say we should build a wall to keep those in need out?

Perhaps because of all the migrant peoples seeking asylum from war, from famine, I had forgotten the other reason people may stand on the edge of land and look across the sea. It is because they can imagine what life might be like across the waves. It is because they have a sense of adventure. It is in the hope to make new stories.

We are a migrant nation. For centuries our lives have been enriched by migrant peoples and their stories that have travelled along the Salt Road, along the Silk Road. We have always welcomed those from afar. So where did we learn from stories that say we should build a wall to keep those in need out? Not from my books.

Jackie Morris and her wonderful team over at Graffeg have offered a copy of Gently Falling Snow for one lucky #FolkloreThursday reader! Sign up for the #FolkloreThursday newsletter for details of how to be in with a chance to win (valid December 2016).