Top 5 Irish Cryptids: the Good, the Bad and the Muckie

For centuries, stories from Irish myth and legend have ignited imaginations all over the world. Today, mysterious records of seemingly-impossible creatures keep that tradition alive. From impolite wolfmen to Ireland’s very own lake monster mystery, the following list has got all of the information you need to brush up on your knowledge of the unseen entities that call this fascinating island nation home.

Oral tradition holds that St. Patrick, the patron saint of Ireland, drove all of the snakes out of the country when a horde of them attacked him during prayer. However, a colorful addendum to this story is often used to explain one of the largest natural presences on the Irish landscape: namely, the River Shannon, the longest river on the island.

According to legend, the oilliphéist (whose name derives from the Irish oll, or “great,” and péist, meaning, at length, “worm,” “beast,” “reptile,” or “monster”) was a serpentine dragon of massive proportions, and even greater intelligence. In some stories, the creature caught wind of Patrick’s plan to banish the snakes of Ireland into the ocean, and, unwilling to stick around long enough to see how the event played out, it made its escape in advance. Legend has it that the scar that its formidable form cut through the land filled with water, and eventually became the River Shannon.

The intelligence of the oilliphéist is also played upon in a common addition to its primary tale. Many say that, on its way out of Ireland, the oilliphéist made a quick snack of a drunken piper named O’Rourke. Oblivious to his soon-to-be state of digestion, the O’Rourke continued to play in the belly of the beast, driving it into such a state of annoyance that it spat him out before plunging into the sea. 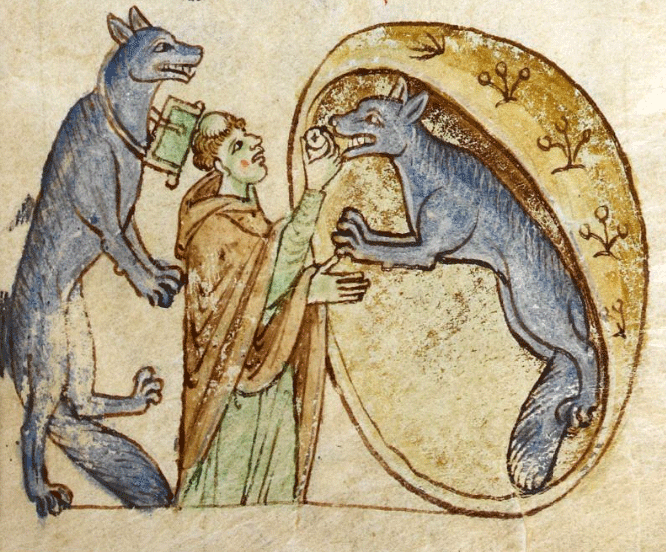 An illustration from Topographia Hiberniae depicting the story of a travelling priest who meets and communes a pair of good werewolves from the kingdom of Ossory. Source

Number Four: The Wolfmen of Ossory and Galway

In an account from Gerard of Wales in the early 12th century, it’s said that an unnamed priest was once travelling through the woods, making his way from the province of Ulster to Co. Meath. To his surprise, a wolf appeared from the thicket. It told him not to be afraid, and explained to him its unique predicament: that, as cursed natives of Ossory (a long-extinct Irish kingdom), a man and a woman were doomed to transform into wolves once every seven years. The male wolf’s partner, it transpired, had fallen ill. He requested that the priest perform the last rites over her ailing body in case she wasn’t able to pull through. The priest complied, and all was well.

Rumors of the presence of wolf-people in Ireland sprung up again in 1913, when a bipedal, canine creature (though some describe it as having the head of a bear) was reportedly seen by two teenagers waiting for a train in Ballymacward, Co. Galway. When boys attempted to speak with the creature, it rudely said, “Don’t talk to me.” While nothing has been reported since then, there’s every chance it could be due to locals opting to follow that strange fellow’s instruction!

Sometimes known as the King Otter, the dobhar-chú is a gargantuan beast said to have once lurked beneath the surface of Glenade Lake in Glenade Valley, Co. Leitrim. A headstone, found in the nearby Conwall Cemetary, bears an image of its likeness. Dating back to September 1722, this headstone marks the burial site of Grace Connolly, a woman became the tragic victim of the King Otter while washing her clothes on the shore of the lake one morning.

Though the story of the Glenade Lake dobhar-chú is easily the creature’s most famous appearance in Irish mythohistory, it’s far from the only one. In the 1896 edition of The Journal of Royal Society of Antiquaries of Ireland, a reader, Ms. Walkington, wrote a letter that described her sighting of a creature “half-wolfdog, half-fish.” Her letter was responded to some time later by Mr. H. Chinchester Hart, who had heard stories of a creature identical to what she described. He called him “The king of all lakes and father of all otters,” and claimed he could “run his muzzle through rocks.”

In the year 2000, renowned Irish artist Sean Corcoran reported witnessing the appearance of a dobhar-chú in a lake while visiting Connemara’s Omey Island with his wife. He said, “The creature swam the width of the lake from west to east in what seemed like a matter of seconds.” After doing so, it gave “the most haunting screech” he had ever heard, and disappeared into the water. 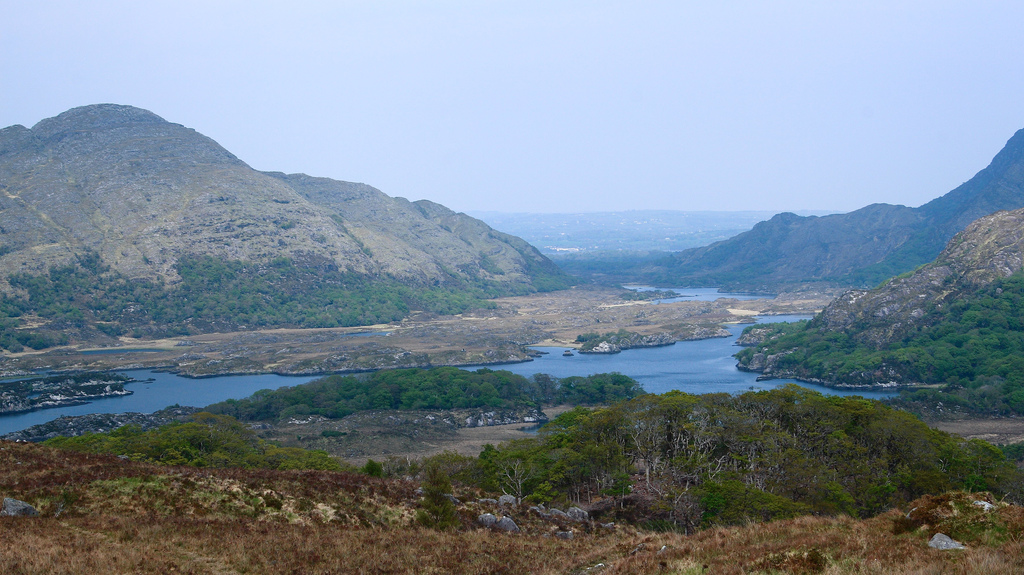 Any fans of HBO’s hit series Game of Thrones are sure to have a special place in their hearts for the direwolves: a litter of canine companions rescued by the show’s leading players, the Stark children. Depicted as an incredibly large and intelligent species of wolf, the direwolves are considered to be the products of legend before the Starks happen upon them.

Similarly, there are plenty of Game of Thrones lovers who assume that these creatures were dreamed up by creator George R.R. Martin — but this couldn’t be more false. In reality, direwolves were a real species that existed about 12,000 years ago. They had hard, heavy bones that brought their weight up to 240 pounds, and their bite to a force more than 30% more powerful than the gray wolves we recognize today.

So, what gives the direwolves their cryptic status, and specifically an Irish one, at that? While most evidence supports argument that prehistoric direwolves are fully extinct today, sightings in Co. Fermanagh, Northern Ireland could suggest otherwise. In 2012, local hikers claimed to witness a pack of these fearsome creatures on the hunt, describing them as wolves with stockier legs, a wider head, and shorter ears, which matches the description of these ancient beasts exactly. While no sightings have been reported since then, whisperings of their presence continue all across the county to this day.

Number One: The Monster of Muckross Lake

Muckross Lake, otherwise known as Middle Lake or the Torc, is Ireland’s deepest lake, located in Killarney National Park in Co. Kerry. Along with a plethora of salmon and brown trout, its gigantic depth — which reaches up to 246 feet in places — is said to be home to something, well, gigantic.

Unlike stories relating to other lake monsters (Nessie, anyone?) the first records of Muckie, the Muckross Lake Monster, are relatively young. In fact, the conversation regarding his existence only began in 2003, when the Irish Charr Conservation Group ran a series of sonar scans in order examine the fish population. Checking their results, they found that something had gotten in the way of the reading; a creature, it seemed, over the size of a two-story house.

“We have been unable to identify exactly what the image is,” said Andrew Long, a specialist fisheries consultant partnered with River Monitoring Technology at the time. “But we know it was not a computer or logging error, as the gear was functioning normally.”

When the researchers looked further back in time, they found that the area had, in fact, been home to the legend of a gargantuan sea serpent for many years. As a matter of fact, one of the highest points in the nearby mountains has always been known as Cnoc na Péiste, or the “Peak of the Serpent,” and an entirely separate lake was said to have been formed by the creature through brute force alone!

Olivia O'Mahony is a writer and folklore enthusiast from Dublin, Ireland. She holds an international degree in English literature and anthropology, and currently lives in New York, where she enjoys making up elaborate life stories for the subway rats. Follow her on Twitter or visit her website.