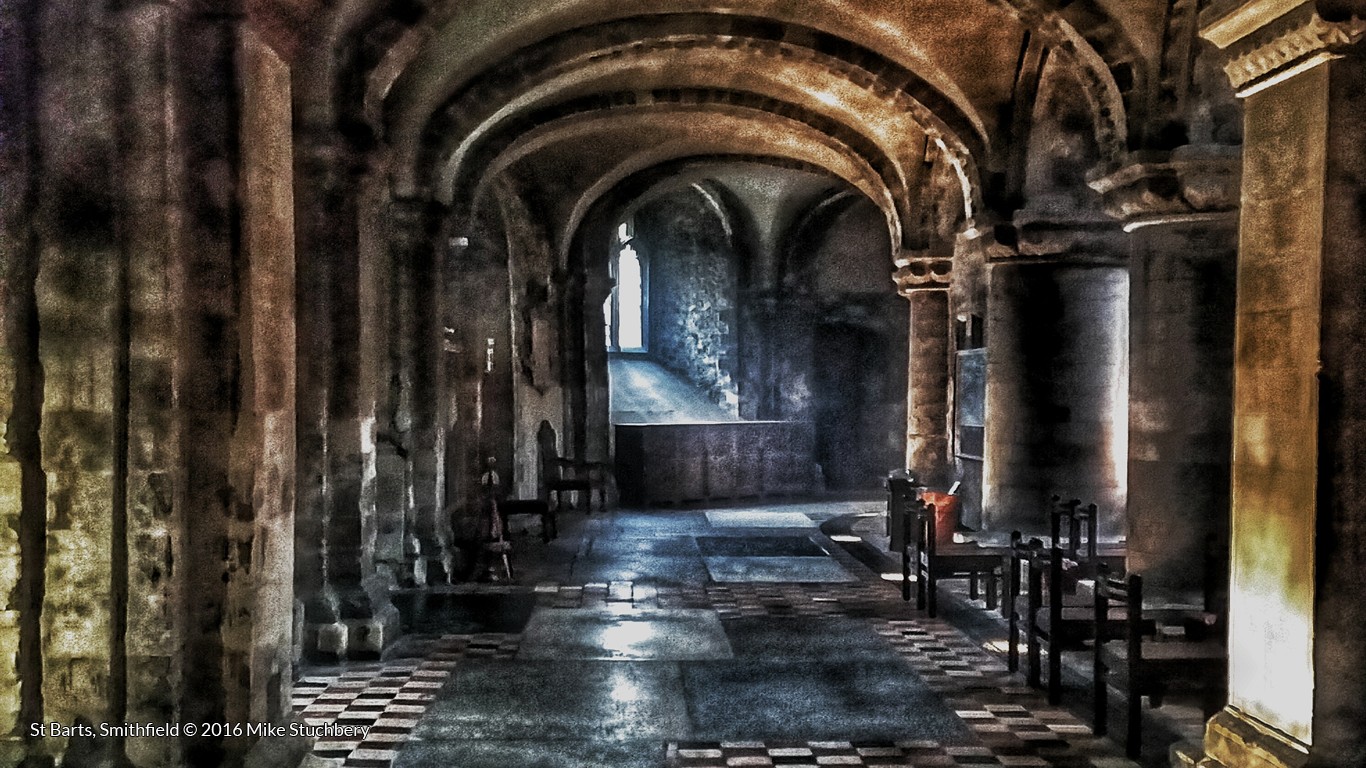 There comes a time – say, after a few centuries – when a place is allowed to revel in stories about itself, how it came to be and what it stands for. The church of Saint Bartholomew the Great in London’s West Smithfield is one such an example.

To begin with, the story of the founding of Saint Bartholomew the Great is one that has all the hallmarks of good folklore – an unlikely hero, a vision, and a dangerous journey.

The tale begins in 1120, when the court of Henry I was thrown into mourning by the death of William Adelin, heir to the crown, in a shipwreck off Harfleur. Amongst the members of Henry’s court at this time was a young cleric named Rahere. A document from 1115 in the archives of St Paul’s Cathedral describes him as a Canon. Much is made of Rahere’s charismatic and flattering nature in the presence of royalty, the sort to place a pillow ‘under every elbow’ as one 19th century text puts it.

“The story of the founding of Saint Bartholomew the Great is one that has all the hallmarks of good folklore – an unlikely hero, a vision, and a dangerous journey.”

Sensing the sombre mood at court, Rahere decided that now was the time to make a grand pilgrimage to Rome. While Rahere managed to make it to the Eternal City, he came down with a major illness, thought to be malaria. At death’s door, he claimed to have had a vision of Saint Bartholomew, patron saint of doctors and healers, who directed him to build a hospital for the treatment of the poor and needy upon his return to London.

True to the vision, Rahere made a complete recovery. In thanks, upon returning to England, he made straight for Henry I. Upon hearing Rahere’s tale, Henry granted the land and funds to build the church. We know that construction work began after a royal charter was granted in 1123 and continued for about a quarter of a century.

Rahere’s new monastic house housed Augustinian canons who specialized in easing the suffering of the ill and elderly. In the twenty years following the establishment of the Priory, its reputation grew until it was the largest in London. This growth was conveniently helped along by miracles that were attributed to the Prior, described in records of the church as including acts of faith healing (said to involve fragments of the True Cross, no less!) and strange lights emanating from the church.

Rahere died in 1144, allegedly when he was in his late fifties – records are sketchy. Up until the end of his life it is said he walked the streets of Smithfield that now teemed as a result of the Priory’s fame. As he wandered, he’d occasionally stop and show off some of the juggling and tumbling tricks he performed at Henry’s court to entertain decades before. We know from church records and  archaeological work that he was quickly interred by the altar and the presence of the folk saint’s remains only contributed to the flood of traffic through the Priory’s gatehouse.

For just over 400 years, the Priory of Saint Bartholomew provided a centre of healing and safety in the midst of Smithfield. Indeed, such was it’s fame that it directly led to the founding of today’s St Bartholomew’s Hospital by Henry VIII. The neighbourhood, however, developed into a place that attracted rebellion, dissent and death like the flies that swarmed over the meat market in the summer.

William Wallace was hung, drawn and quartered outside the front of the church. Wat Tyler was murdered by the Lord Mayor of the London at right about the same spot. Perhaps the blackest stain, however, was the execution of heretics – Lollards, then Protestants – at the stake by the gatehouse of the church. Works such as Foxe’s Book of Martyrs tell some truly shocking tales about the deaths the church witnessed.

After the dissolution of the monasteries, St Bartholomew the Great was reduced in stature. While it remained an important parish church, sections were used as housing and storerooms and it is perhaps this development that led to the church retaining its unique appearance and feel – there was no fiddling by Wren or Hawksmoor and Aston Webb’s renovations were incredibly sensitive and in keeping with the church’s Norman roots.

“… one can’t help but think that the waves of bloody events and turmoil crashing against the church left some kind of psychic residue. There are certainly enough ghost stories to support this notion.”

While the interior of Saint Bartholomew may be striking and responsible for its unique atmosphere, one can’t help but think that the waves of bloody events and turmoil crashing against the church left some kind of psychic residue. There are certainly enough ghost stories to support this notion.

Veteran ‘ghost hunter’, Elliot O’Donnell, in Haunted Churches states that since the unearthing of stake-pits and ashes in 1849,  the screams of Protestant martyrs and the crackle of bonfires can be heard outside the gatehouse of the church.

Inside the church, if further tales are to be believed, the place fairly crawls with spectres. Former chairman of the Ghost Club, Peter Underwood, in Haunted London describes regular visitations by monk-like figures, in addition to William Hogarth, who was baptised in the church. At other times a man in the garb of a Protestant priest has been seen, haranguing an invisible congregation. Other reports hold that shapeless masses ’emanating evil’, float down the aisles and by the chapels – an angry Lollard or Protestant?

My favourite tale, however, concerns Rahere and his footwear and can be found in many a book dealing with London’s ghostly apparitions. We know from church records that the most recent large-scale renovation work inside the church began around June, 1865. As work began, the story goes, the medieval tomb of Rahere was opened, as the canopy had crumbled. Inside lay the founder’s skeleton, undisturbed and still wearing his monk’s sandals.

Thinking it a lark, the tale continues, a workman nicked one of the sandals, foot bones included. A few days later he returned ashen-faced and gave the shoe to the churchwarden, claiming he’d suddenly taken ill. Unfortunately, somewhere along the line Rahere’s bones were misplaced and this is said to be responsible for the wandering of Rahere’s wraith up and down the aisles of the church on moonlit nights, desperately seeking his foot!

A creepy tale to be sure, and one with one verifiable kernel of truth – many late 19th and early 20th century guides recommend visitors head to the cloister to observe a scrap of sandal said to be that of the Priory’s founder.

Regardless of the truth of such tales, the church of Saint Bartholomew the Great is a treasure, not only for its architectural beauty, but for its storied role in 800 years of British history – a worthy visit next time you’re in London and wandering the streets of Smithfield

Mike Stuchbery works in a voluntary capacity to develop education programs at St Bartholomew the Great. He also writes about history, churches and folklore. He can be found on Twitter at @MrMStuchbery.