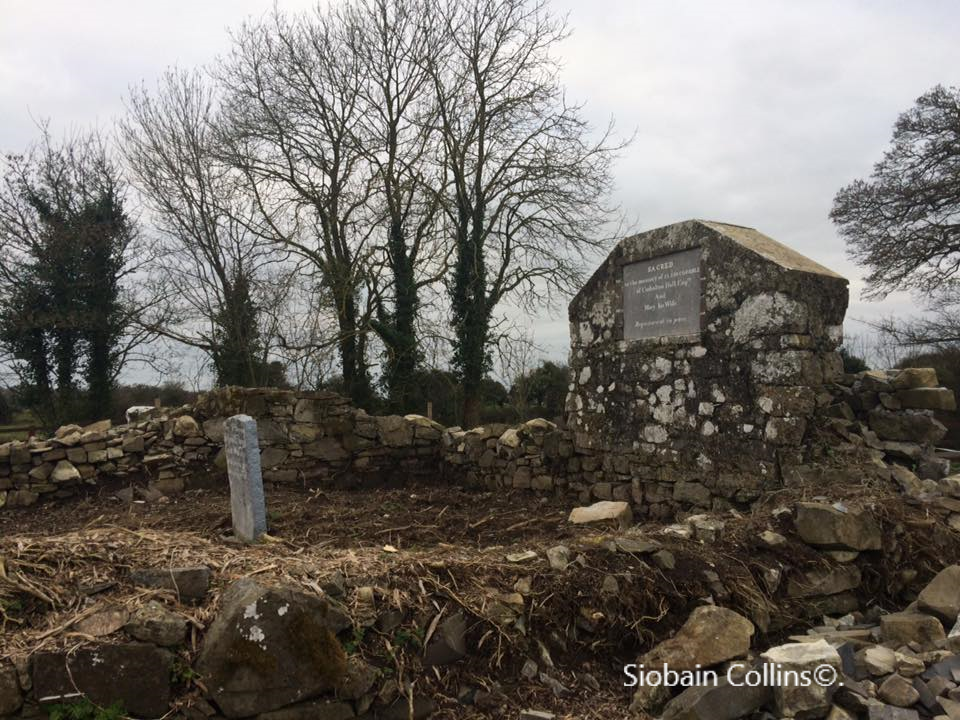 Thirty years ago in Irish literary studies a contentious article asserted that ‘a preoccupation with death is the most evident hallmark of the Irishness of Irish culture’.[1] The literary theorist Patrick Sheerin supported his thesis referring to the privileged position of coffins, graves and graveyards in both the Irish landscape and its literature, citing texts from all major periods of Irish literature.

Sheerin developed his argument by maintaining that, not only do burial places have significant material presences in and on the land, but they have also significant immaterial functions.   This funereal referent was closely bound to an Otherworld referent.  He defined it philosophically as contemptus mundi.

‘Until quite recently most Irish people lived within a cosmos that contained a privileged vertical dimension rather than a landscape with a horizontal one’.[2]

‘Graveyards themselves are focal points in the landscape and function as inverse omphali, sacred places which link this world to the one above and below’.[3]

Tracing these concepts back to their oldest Irish mythological forms leads to the figures of the Cailleach, and Medb, antagonist of the epic the Táin Bó Cúailnge.  The Cailleach, which translates as ‘old woman’, ‘hag’, and ‘veiled one’, exists in both Irish and Scottish Gaelic, and is an expression of the hag or crone archetype found throughout world cultures.  Many suggest this figure was then re-elaborated by the Celtic warrior culture as a war/battle goddess, an expression of which was Medb.  These ancient tropes continued to be used in Gaelic literature into the Middle Ages and the early modern period.

The Cailleach: The Personification of Land and Nature

This figure is found in traditional cosmology as ‘the personification, in divine female form, of the physical landscape within which human life is lived and also of the cosmic forces at work in that landscape’.[4]   In mythological terms, scholars such as Marin Ni Eoin, Marie-Louise Sjoestedt, Julia Kristeva and Maire MacNeill, have developed female divinity theory by identifying a recurrent theme of the ‘entombed female’.  Placenames and physical elements of the landscape are frequently associated with the death and burial of divine females who can be considered derivations of a generative female divinity.  These include mountains, mounds, coastline, rivers, lakes and caves.  This cosmology included the weather and the fertility of the land, which later developed into the sovereignty principle.  Jungian analyst, Sylvia Brinton Perera refers to this as ‘the sacred and natural order of the unus mundus – the primeval unity before the opposites are separated’.[5]

‘Famous above women were these for grace, they plied no business, after the fashion of low-born women;
Though their lakes clave to the heroic women, Silend had a fatal toil from her lake-bed.

‘Turloch Silinde’, poem 66 from The Metrical Dindshenchas, oral literature dating from pre-Christian era, transcribed in the 11th and 12th centuries.[6]

Celtic culture had its own female divinities and so easily integrated older indigenous cosmologies.  In this hybrid cosmology the divine female became a foil to the semi-divine male hero figure.  This combination created a framework which rested on a male/female dynamic.  The female represented the cosmos principle – eternal and cyclical, while the male construct represented linear human history time marked by the male hero’s historical achievements.  What followed was a mythology split – with human historical myths now being male dominated while the divine female trope was centred in topographical myths.[7]  The female archetype combined ‘two fundamental aspects: an elementary (or nourishing) and a transformative (or creative) aspect.’[8]  This transformative aspect could also be destructive.  As Neuman sustained, the more archaic the story, the less likely it is that contradictory attributes are functionally separate.[9]

The Cailleach or Divine Hag also performed an intermediary role of supernatural encounter with humans and the native Otherworld.  Gearoid O’ Crualaoich asserts that this may have given origin and strength to the Otherworld beliefs which developed into the Sí – or fairy world.[10]

As the political sphere developed in society, the female divinity was appropriated and ritualized as a means of enforcing the legitimacy of sovereignty.  Male kings having usurped the sovereignty of the divine feminine now had to enact rituals to integrate and legitimize this function.  Mary Condren has discussed the radical change in status that the female divinity experienced with the rise of the warrior cult.  Her status declined ‘from Mother Goddess, to consort to daughter’[11], and she speculates that it was only on this loss of status did she become a war goddess.

This distortion is not only seen in the diminution of the presence of female divinity, but also in the mode of representation.  Head counts and ‘deeds of valour became the new fruits of harvest of the warrior society’.[12]  Symbols and images of past fertility such as menses are now seen as foul by Christian scribes.[13]  This historical period favoured tribalism with tanistry and gavelkind as hereditary forms of rule.  Its pre-Christian mindset accepted the widespread use of violence.  This warrior death-cult worldview also marked the landscape.  Many placenames were now named after sites of heroes’ deaths or battles.

How female divinity is displaced

‘The Cailleach Bhearra’ or ‘The Lament of the Old Woman of Beare’ may be considered the perfect crossover example of the divine female cosmology principal as it moves from the pagan to the Christian era.  This poem is in Old Irish and dates from around 900.[14] In it we see a blending of the crone archetype with the ‘eternity of the native Otherworld, immanent in the landscape’.[15] However, despite the expression of regret, all is rejected in acceptance of the Christian eternity.

‘My flood-tide/ it is well that it has guarded my deposit (soul) / Jesus, son of Mary has delivered it / so that I am not sorrowful until the ebb.

As cosmology becomes Christian-centric The Cailleach becomes wholly identified with the crone trope.[17]  However she continued to function as a transgressive alternative to the later dominant Christian culture, providing a therapeutic function for the community through story and symbolism, as well as supplying models for female agency through its derivatives of the bean feasa (wise woman), bean ghlúine (midwife) and the bean chaointe (keening woman).[18] Though now absent in cosmological considerations, the figure continued in local folklore, especially in tales which served as explanations of geological forms and placenames, but also in the ‘When all else fails’, wise woman stories.[19]

The Cailleach in the early modern period

By the late eighteenth and early nineteenth centuries, the female divinity had been subsumed along several lines in both nutritive and destructive forms.  From mythology she now descended to legend, in the form of the bean sí (banshee), retaining a sovereignty connection based on her unique attachment to descendants of families of the original Gaelic order.

The ‘entombed female’ strand continued in the sphere of fairy-world beliefs.  Monastic literature had transcribed or perhaps even created the origin myth of Ireland (found in the Book of Invasions).  Christian scribes identified the Tuatha De Dannan tribe as original inhabitants of the island, but described them as retreating underground after defeat by the invading Celts, thus ruling the Otherworld realm from underground.   By the modern period these ‘subterranean people’ were now conflated with ‘the little people’.[20]  The supernatural world was now entirely sited underground, though it still found external expression in connection with unusual natural events and inexplicable phenomena. 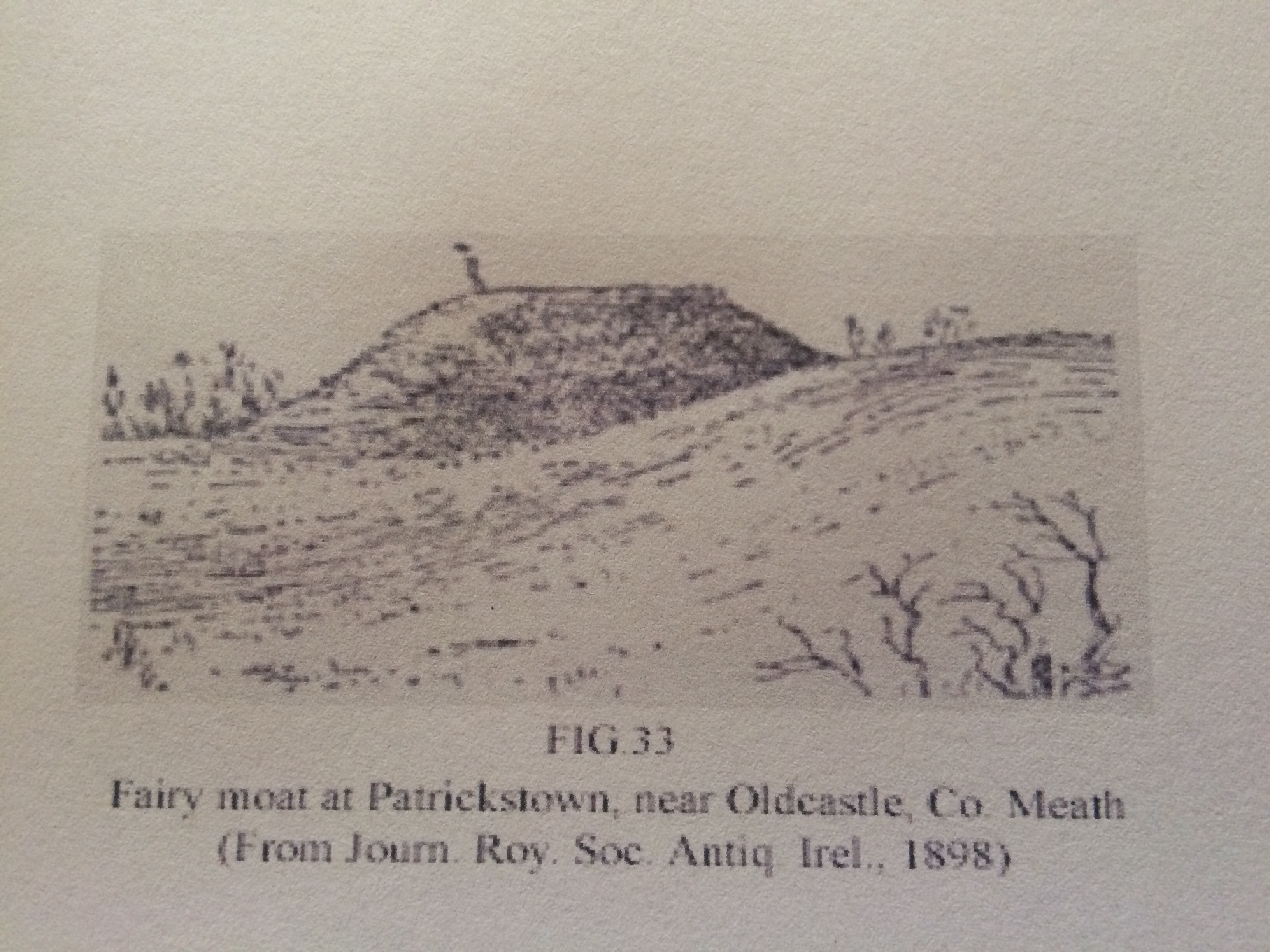 Drawing of a fairy moat from the Journal of the Royal Society of Antiquities of Ireland, republished in P.W. Joyce (1908).This connection can be seen with the taboos associated with Iron Age raths, now termed Fairy Forts.  A belief persisted that people who disturbed these sites would lose the fertility of their land and even be personally harmed.  This was described as being ‘fairy struck’, which was a form of paralysis which could lead to illness and even death.[21]

The supernatural or fairy world was also employed in situations of deviance from societal norms, such as marriage difficulties or ill health; both physical and mental.  These problems were mediated through stories of fairy abductions and fairy changelings.[22]

The treatment of the female divinity concept has had many forms in Irish literary and folk culture.  Original forms were shaped and often deformed as successive historical periods expressed their own unique cosmological myths and religious dogma, while incorporating elements of previous beliefs.   Today, the Cailleach archetype has returned as a reference archetype and has been used as a conduit for environmental activism[23] and New Age spirituality[24] as traditional religious beliefs lose ground and fears about climate change increase.  It can be asserted that the energy that has sustained the existence of this archetype through all eras, results from its expression of the primal energies of human consciousness interacting with its environment and then expressing and sharing those exchanges through cultural forms and beliefs.

The Cailleach (Kal-y-ach) is the Ancient Earth herself.
She is the lichen-covered rocks and the mountain peaks.
She is the bared earth covered with snow and frost.
She is the Deep Ancestress, veiled by the passage of time.[25]

Anderson, S. and Cannon, S. (2016) The Way of the Mysterial Woman, Upgrading how you live, love and lead, She Writes Press, Berkeley, CA.

O’Crualaoich, G. (2003) The Book of the Cailleach, Stories of the Wise-Woman healer, Cork University Press, Cork.

Siobain works for a language company in Italy. She has an MA in Gaelic literature from University College Cork. Her research topics are The Cailleach and eco-folklore. She is a Content Editor and Twitter Guest Host for Folklore Thursday. Follow Siobain on Twitter here .