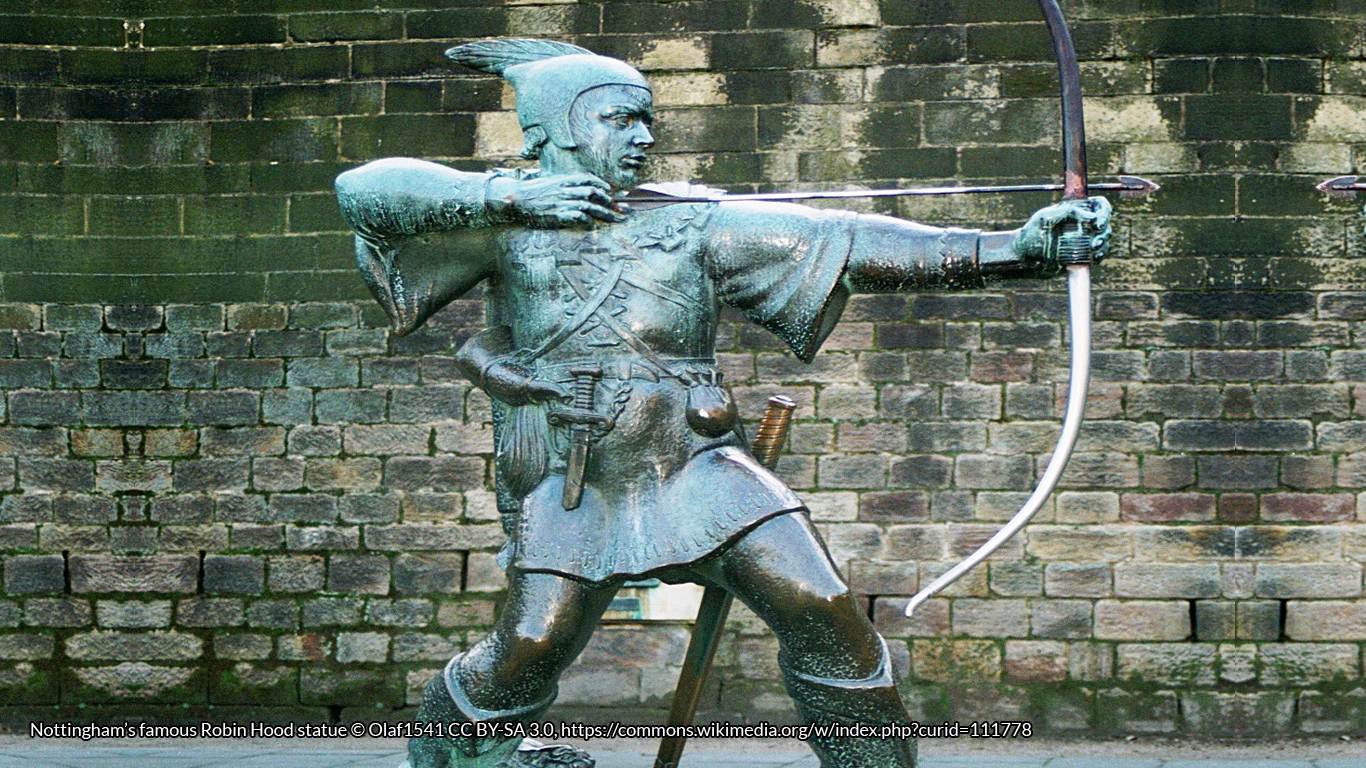 Historians have long debated the issue of whether the character of Robin Hood was an archetypal fictional figure, or an actual person with historical roots, possibly inspired by contemporary characters. Michael Reuel has come up with an interesting new theory on the Robin Hood story: that he was indeed a real person. Michael explains his ideas, and presents the view from his new book, ‘Robin Hood Existed’, here in his article for #FolkloreThursday …

While we might all be familiar with the name Robin Hood, exactly how in touch we are with an actual historical figure is seldom made clear. The Sherwood outlaw is so famous that he has become a creature of popular culture, which includes numerous falsehoods that are tough to shake. Many of these falsehoods are familiar ones. Most notably they include the positioning of Robin alongside Kings Richard and John, and the recasting of his identity into a disinherited nobleman. Some storytellers insist on going as far as having him fight in the Holy Land; others choose to align him with the Saxon resistance against the Normans. Neither of these tales have any historical merit. But why? Where have storytellers taken their cues from and what version of the tale should we be telling?

Tracing the roots of Robin’s story shows us that none of these mistakes occurred by accident. Medieval storytellers tended to take their cues from something grounded, even if they then fantasised and elaborated in the telling. Sadly, however, the same was not true of medieval historians. Indeed, it was sixteenth century Scottish historians, keen to understand the stories that had also become popular north of the border, who first sought to explain Robin Hood’s identity within a historical context. In order to achieve this they overlooked – either clumsily or deliberately – many reasons why his identity might have been obscure. Unfortunately, acknowledging grey areas in the telling was not good enough for them, and so they used presumption and bias to fill the gaps. Determined to align Robin Hood with a righteous cause and popular kingly struggle, they opted to make him a follower of Richard the Lionheart, while Prince John provided a usual suspect for the villain. Even though these spurious links would soon be discredited by rival historians, the problem is that the first storytellers to bring Robin Hood to a wider audience followed the lead of those initial chroniclers. Because the instinct was to head for the earliest known references, their mistakes remain with us to this day.

Although I do not imagine much of this comes as a surprise, it is a lesser known truth that purer versions of an original story do exist. In fact, in my book I make the argument that the opinion of Robin Hood as figure of make-believe can be hotly contested. For current historians the issue is difficult to contend with, as it means weighing up the value of folklore against documented history, from which many scholars shy away. However, in Robin Hood’s case, it should be pointed out that the folklore is quite extensive. A collection of associated ballads, originally oral tales, survive from the fifteenth century. Five of these tales have been found to be of earlier origin than the rest, and it is these that are the most interesting to folklorists. These ballads are known as Robin Hood and the Monk, The Gest of Robyn Hode, Robin Hood and the Potter, Robin Hood and Guy of Gisborne, and The Death of Robin Hood. The ballads are all part of what is known as ‘The Percy Folio’, which was compiled in the seventeenth century, but using material dating at least as far back as the fourteenth century.

Accepting a historical version of Robin Hood, as opposed to the one of popular legend, depends upon whether you accept these ballads as a genuine attempt to record factual stories, or as a piece of fiction. The many arguments to support their validity are too complex to sum up here, but many agree on extensive reasons for interpreting the ballads as potentially down-to-earth and authentic in their attempt to record established local knowledge, rather than merely spinning a yarn. So, if this summation is correct, which I would argue is the case, what might Robin Hood have been like before popular culture twisted his origins? The most obvious difference between the Robin Hood of popular belief and that of the possible historical figure in the ballads is his time period. I believe that Robin Hood did not live in Richard or John’s reign, but at the time of a King Edward. As three King Edwards reigned from 1272 to 1377, this can prove problematic in placing the tales in a firm date period. However, the clues indicate that the most important king for understanding Robin Hood’s fame may be that of Edward III, who reigned from 1327 to 1377. This places the outlaw more than one hundred years after King John’s reign, which may explain why historians have been unable to find him there.

By studying Edward III’s reign, many of the dynamics and peculiarities of the ballads come to make sense. The early fourteenth century proved to be a new dawn for the English nation. A vibrant and energetic young king first overthrew his father’s traitors, then went about teaching his countrymen how to be victorious on the battlefield again. After repelling the Scottish invasions, he turned his attention to a dominant French power, and many historians agree that his subsequent military victories at Crecy and Poitiers were greater than the now more famous Agincourt. Although we might frown at such values now, these victories made Edward III a very popular king and, for a time, England was an optimistic kingdom. It had a new flag, popular culture was embraced, and it was also a time when Robin Hood’s longbow became the country’s celebrated weapon.

Keen to celebrate England’s new prowess, King Edward ordered numerous courtly events and entertainments for the benefit of all classes. Popular depictions of Robin Hood show how he is often drawn out of the woods to compete in archery contests. The ballads tell that Robin did not compete as a disinherited nobleman, however, but as a yeoman – a broad term that essentially indicates he was a man of no status. In addition, the ballads are also clear that he is a woodsman, and so living outside of society. This was a time when the forests of England were said to cover two-thirds of the land. There was plenty of space to carve out an independent existence if you did not have a taste for the tumultuous reigns of previous rulers. Indeed, medieval kings often overlooked lawless regions, as with the Welsh and Scottish borders, though the ballads say it was the Greenwood that served as a lawless region for Robin and his men. For the most part, his location has never changed. The ballads tell that Sherwood and Barnsdale forest (across the Yorkshire border) was where Robin’s men were centralised, though they also suggest that they travelled far and wide. They note that not only were the men skilled archers and swordsmen, but also accomplished horse riders – an addition often missing from popular depictions.

How and why a lowly peasant like Robin would become a hero of the people is part of the fun of interpreting the ballads. The chroniclers did not understand his popularity; not without a kingly cause. So, in order to understand why, we need to think like a yeoman. It is explicitly stated in the ballads that Robin did much good for the poor. So, perhaps surprisingly, the ‘rob from the rich to give to the poor’ reputation does stand up. This was likely not in terms of some great charitable mission (mostly Robin and his men rob the rich to show off their woodland liberties and freedoms), but it is not inconceivable that their loot never made it into poor people’s hands. After all, as a wild man of the woods, he would have had little use for riches. Certainly he is very generous with one destitute knight, who is being blackmailed by the clergy, while he also gifts jewels to the sheriff’s wife and flouts any concern for profit or financial security that the people of Nottingham have.

But what motivated him to do all this if not some great kingly cause? It appears that Robin’s chief enemies were what can be described as figures of local authority. His beef with the sheriff of Nottingham is well known, but those he loathed most were the clergy. Churchmen and monks fall foul of Robin’s tricks and this is why he was so popular, because it was just such men who had direct influence over the lives of ordinary people. By considering clerical abuses ongoing in closer proximity, it becomes easier to understand why the yeomanry found a place in their hearts for a mischievous woodsman. Other key elements of Robin’s heroism recorded in the ballads include his respect for women and his religious faith. Although he despises the clergy, he venerates the Virgin Mary, and his need to emerge from the woodland to worship in God’s house results in him being locked up in Nottingham Castle at least once. When he is murdered, it is said at his death that he “never did fair maid harm”, perhaps suggesting a popularity that was shared by both the sexes.

This attempt to realign Robin Hood with the hero of the original ballads, and away from the one of popular culture, is not a new pursuit. Antiquarians like Joseph Ritson have argued for the veracity of the ballads and for Robin’s status as a historical figure since the eighteenth century. Popular culture is a tough beast to tame, but that doesn’t mean there is nothing more authentic to discover if you feel the urge to go looking.

So there is our hero. Very familiar after all, because the core components of a good story never really change, even if history and context become skewed. The Robin Hood of the ballads was less noble and more brutal than we tend to depict, but not inhumane nor merely a common thief. He was a hero of the people and deserves to be remembered as one.

The English Resistance: The Underground War Against the Normans

Michael Reuel grew up in Coventry and is an author of adventure / detective stories that are inspired by myth and folklore. Follow him on Twitter and Facebook.