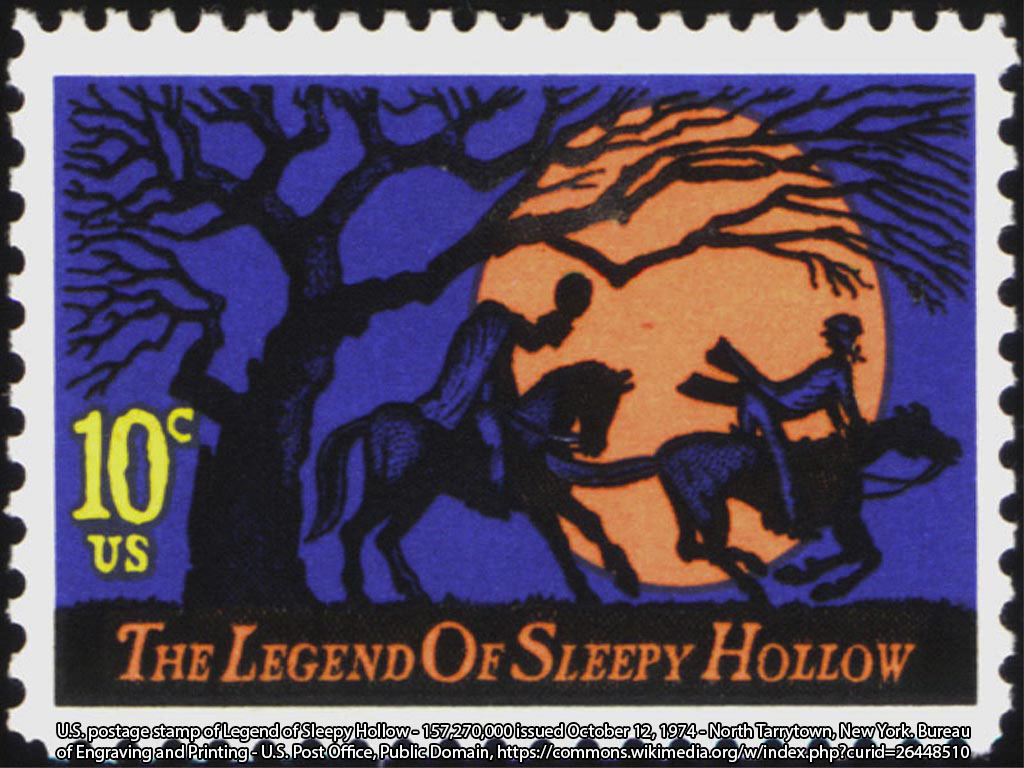 Forever immortalised in Washington Irving’s ‘The Legend of Sleepy Hollow’ the Headless Horseman has undoubtedly become one of horror fiction’s most iconic spectres. This monstrous phantom which torments and pursues the lanky figure of Ichabod Crane set against backdrop of Tarrytown New York has become a staple of Americana. Whilst it’s said Irving was influenced by tales of a decapitated Hessian soldier, felled during the battle of White Plains and it’s rumoured haunting of his hometown, the history of the phantom horseman has its roots far away from Irving’s own in homeland. Roots which are intertwined within the ancient folktales of Europe.

In 1815 Irving found himself in England, far from home and attempting to salvage his family’s trading company. A keen writer, Irving would continue putting pen to paper over the following years as he found himself struggling for work. During the summer of 1817 Irving became acquainted with fellow writer Walter Scott. Scott was a notable enthusiast over German folklore, in particular the fairy tales of the Brothers Grimm, each based originally on the Grimm’s native Germanic folklore. Both Irving and Scott found a common passion for these tales many of which detailed ghosts (or ‘geists’) often appearing on horseback or as part of a hunting party.

Most notable of the stories was arguably ‘The Wild Hunt’ a popular folktale typically spanning across Northern Europe detailing of a chase for souls by a procession of ghostly hunters. 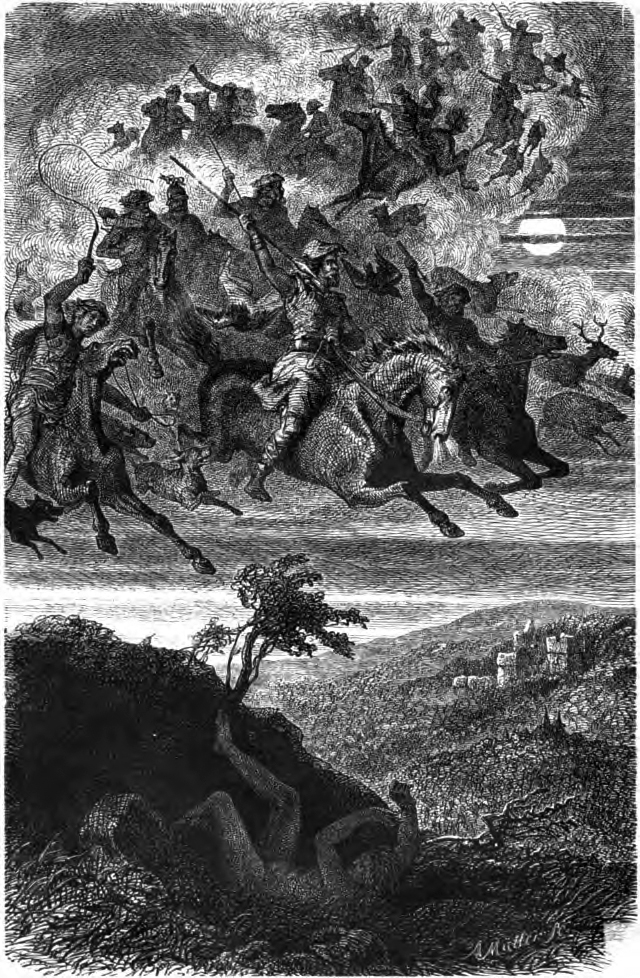 The Grimm’s themselves wrote of ‘Der Ewige Jäger’ (The Eternal Hunter) relating the tale of a count who encounters a spectre whilst out hunting for pleasure. The spectre, informing the count he had begged god to let him hunt until judgement day. Similar Grimm stories also mention ‘Hacklelberg’, the ‘Wild Huntsman’, cursed to forever hunt. This is a similar narrative to Denmark’s Scandinavian folk tale of ‘King Waldemar’ a ghost forever hunting his prey.

Yet another tale of the Grimm’s related the story of  ‘Hans Jagenteufel’ set in 1644 with a cursed headless grey horseman dressed in a very ‘Hessian-esque’ long coat, ‘boots and spurs’. Again the ghost’s appearance is preluded by a hunter’s horn, as the ghosts appears before a woman collecting acorns in a wood.

Scott loved these tales and eventually translated Gottfried August Bürger’s “Lenore” and “Der Wilde Jäger” into “William and Helen” and “The Chase” or “The Wild Huntsman”  respectively. The latter tale ‘The Wild Huntsman’, though not 100% precise, retold the story of the ‘Rheingraf’ (with ‘graf’ meaning ‘count’). The title ‘Rheingraf’ being a unique noble title and refering to a territory belonging to the family/holder of the title. This royal hunter is again cursed following his abhorrent behaviour against man and beast.

Scott’s native Scotland also told of a headless ghost ‘Ewen of the Little Head’ and he would be familiar with such wraiths, which also haunted Ireland. These included the Dullahan, a celtic ghost, often headless who would come to take souls to the afterlife. Along with The Gentry, a procession of mischievous fairy-like creatures who were often glimpsed hunting. Closer to home, England’s Windsor forest was rumoured to be haunted by the ghostly hunter Herne who is mentioned in Shakespeare’s ‘The Merry Wives of Windsor’. No doubt familiar to Irving alongside the headless figure in the legendary ‘Gawain and the Green Knight’.

Equally, Scott appreciated the influence of the landscape upon the perceiver of such apparitions as he later wrote the following passage in his book Demonology and Witchcraft:

“The Imaginative superstition of the Wild Huntsman in Germany seems to have had its origin in strong fancy, operating upon the auricular deceptions, respecting the numerous sounds likely to occur in the dark recesses of pathless forests.”

Scott went onto liken the experience to yet another Scottish belief detailed in the ancient poem, ‘Albania’, which spoke of a ghostly hunt taking place in the highlands of Scotland.

Ere since of old, tlie hauglity thanes of Ross,

So to the simple swain tradition tells ;

Were wont with clans, and ready vassals thronged,

To wake the bounding stag, or guilty wolf,

There oft is heard at midnight, or at noon,

voice of hunters, and of hounds,

the gale Labours with wilder shrieks,

and rifer din Of hot pursuit,

the broken cry of deer

the shouts of men,

And hoofs thick beating on the hollow hill.

Sudden the grazing heifer in the vale

Starts at the noise, and both the herdsman’s ears

The mountains height, and all the ridges round, Yet not one trace of living wight discerns ;

Nor knows, o’erawed, and trembling as he stands,

To what, or whom, he owes his idle fear,

To ghost, to witch, to fairy, or to fiend,

But wonders, and no end of wondering finds.”

Scott referenced the history of the tale as:

“The superstition seems to have been very general, as appears from the following fine poetical description of the phantom chase, as it was heard in the wilds of Ross-shire”

“No doubt many of our readers will recall, when they read them, the old local stories of the tucking of drums, the apparitions of marchine armies, and fearful noises of conflict, which the honest and peaceable residents by Hill of Fare and Brimmond Hill, heard before the “troubles” of the 17th century.”

Such tales seemed to permeate Scott’s mind when he himself had an experience which he at first thought supernatural whilst out walking with a friend. He related the following passage about himself:

“he was walking about two years since, in a wild and solitary scene with a young friend who laboured under the infirmity of a severe deafness, when he heard what he conceived to be the distant cry of a pack of hounds, sounding intermitted. As the season was summer, this, on a moment’s reflection, satisfied the hearer that it could not be the clamour of an actual chase, and yet his ears repeatedly brought back the supposed cry.“

Scott later found this to be down to his companion’s ear trumpet tunnelling the mountain wind and creating an unearthly sound as if of a spectral hunt. Even years after publishing his poem ‘The Chase’ a part of Scott was evidently somewhat haunted by these tales.

It would be Scott who would encourage Irving to keep writing, and seeking influence from such European tales, along with ghost stories from his homeland Irving would write his greatest publication. Produced whilst still living in Birmingham, England Irving’s  The Sketch Book of Geoffrey Crayon would be an acclaimed anthology of 30 stories and essays. This included the likes of Rip Van Winkle, and a notable ghost story set in his native country titled ‘The Legend of Sleepy Hollow’.

Blending influences of both European and local lore of goblins which supposedly arose from the area around Tarrytown, Irving would also include an array of real life people and placenames who he was aware of to help add depth to his story.

In weaving these strands together Irving created a legendary ghost story that remains forever one of literary fiction’s most terrifying supernatural apparitions.

Early Haunts, which includes the first ever faithful comic adaptation of ‘Der Wilde Jäger”, is on Kickstarter now.

The ghost story, one of the oldest forms of narrative which has terrified and intrigued audiences for millennia. Now four early ghost stories, mostly forgotten in the depths of literary history are brought together for the first time in one graphic novel adaptation. Early Haunts collates four early supernatural tales which each inspired some of history’s greatest horror publications.

Walter Scott, The Chase, and William and Helen: two ballads, from the German. Printed by Mundell and Son, R. Bank Close, for Manners and Miller, Parliament Square (1796)

W & R Chambers, Chambers’s Encyclopædia: A Dictionary of Universal Knowledge for the People,(1878)

Crofton Croker, Fairy Legends and Traditions of the South of Ireland, Lea and Blanchard (1844)

William Thomas Stead, Real Ghost Stories: A Revised Reprint of the Christmas and New Year’s Numbers of the “Review of Reviews” 1891-2