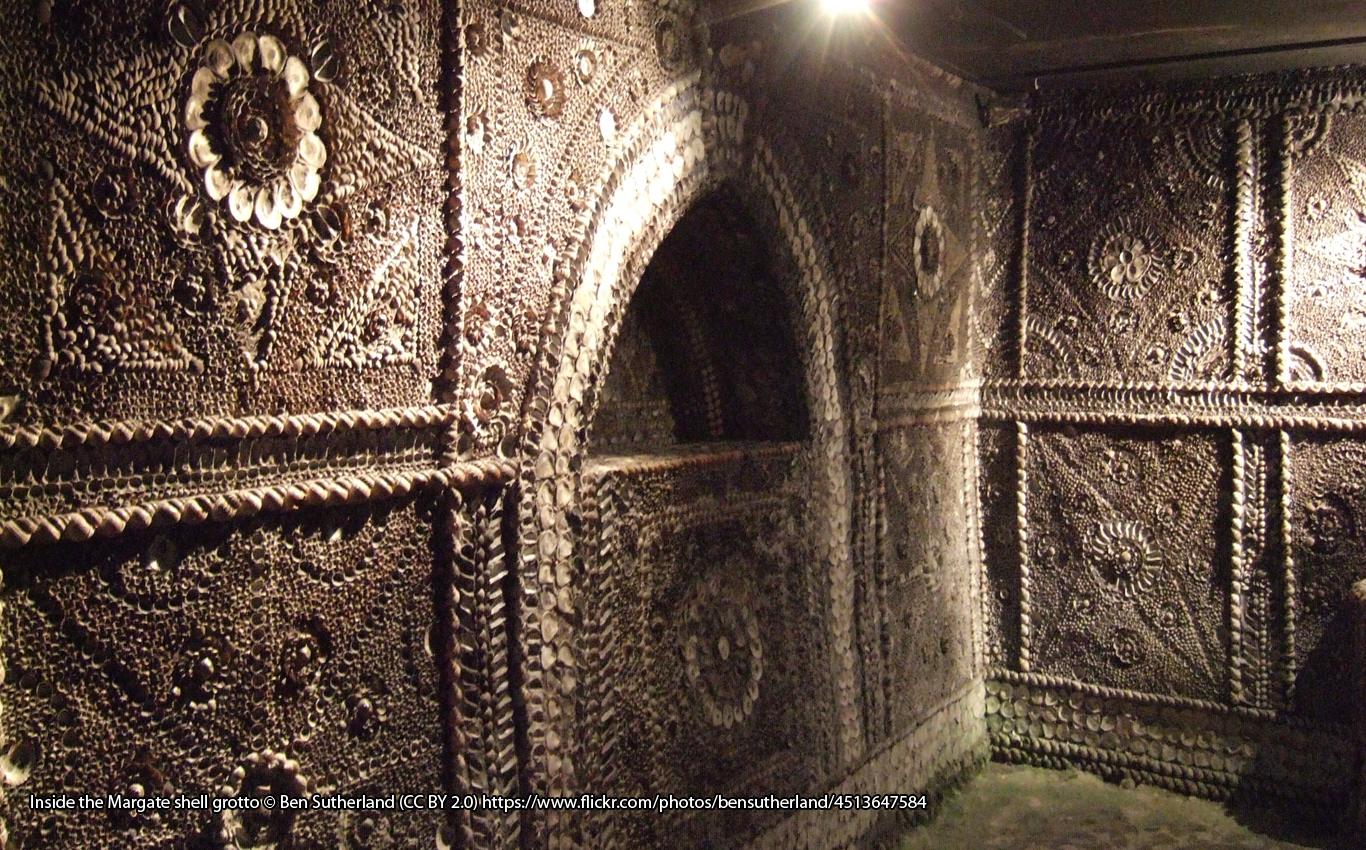 Shell grottos have a certain murky ambiguity to their history and folklore. This, for me, made them all the more enticing to use as the basis for a ghost story in my tale, ‘The Grotter’ in Nyctophobias. Especially with my roots as a Whitstable native in Kent, where grottos are still primarily lit once a year as part of the Oyster Festival celebrations. These grottos are usually stacked in a ‘beehive’ style pyramid, held together with wet sand and illuminated by a short candle.

It’s said this tradition dates back to medieval times to the ‘Oyster Fair’ when oyster boat fishermen would pay their dues to St. James, the patron saint of fishermen. The 25th of July being known as Saint James’ Day or Grotto Day. These religious connotations are said to be down to the legend of James once encountering a drowning Portuguese man. But thanks to his intervention, the man and his horse were both saved and both emerged from the water covered in shells. Ever since, the shell emblem has been associated with the saint, and pilgrims returning from Compostela often carried shells so that everyone would know from where they’d come.

From this point onwards it became the custom for children to build their own grottos out of shells, pebbles, broken pottery and other bric-a-brac which might have been freely available as a shrine to St James. Notably this was usually created as a sign that the ‘Grotter’ was unable to make the journey to worship at St James’s Shrine at Compostella. As incredibly the oyster was once seen as a cheap meal for the lower classes so quite often these lit grottos would have been created primarily from oyster shells.

After being lit, a call for donation would be chanted by the Grotter as either:

“Pray remember the grotto”, which became in time, “Patronise the grotto.”

Later in the 1800s any religious link had been removed and you would find often find children lining the old Kent Road in London (the pilgrim route to Canterbury) creating shell grottos and asking passers-by to ‘spare a copper’ for their small shell buildings (much in the same way children would ask ‘Penny for a Guy’ every November).

This was especially prevalent around the time of the yearly Mitcham fair, when children would make a plea for donations for their grotto in the form of a rhyme in order to get them to the fair.

Following WW2 the tradition started to die out, though slowly over the decades ‘Grotto building’ came back into favour with children. In some seaside towns the tradition hadn’t particularly gone away at all. However since 1988 when Whitstable’s Oyster festival was revived this tradition rose again in popularity again for the district. To this day grottos are lit by children in the same stretch of beach the ceremony of the blessing of the sea takes place every year.

The sight of a beach at dusk, gently lit by the dancing lights of multiple tiny grottos remains for me one of the most haunting sights at the festival.

For any visiting friends I always recommend that they too join in this tradition taking a tealight, a stack of shells and trying their hand at building your own illuminated shrine.

I’d been told of a charming town on the south east coast which over recent years had become quite a hit with commuters seeking a weekend escape from the smog of the city. Known for centuries for its shellfish, the town’s annual festivities had long brought in tourists seeking a taste of the local culture and the old traditions. But not all traditions have a clear-cut origin, and their yearly re-enactments don’t always herald cheer. One in particular though, still celebrated locally, has been marred by various strange happenings. I had happened to pass through the town last year and whilst queuing to sample its overpriced shellfish I’d been told the following by another visitor in the line. It’s unclear when the following happened but she was eager to leave the town before dark.

“When I was young, we used to visit my great aunt every summer who had a house on the beach. I loved my evenings with my aunt and we’d end up walking the shoreline and watching the children light shell-grottos until dusk. Occasionally I had been allowed to light grottos too, but only when I was accompanied by an adult. I was strictly forbidden to light a grotto at the far end of the beach, beyond where the tourists occasionally strayed. That was the ‘dark part of the shore’, a place we knew not to go near. It was where the sea winds were funnelled by the groins, so it forever lay in shadow and the grottos were quick to blow out. No fisherman would ever launch their boat there.

I never understood what the locals meant by ‘the dark part of the shore’. Then one summer evening, when my parents had gone for a drink and my great aunt had taken me for a walk, our usual relaxing hike had been interrupted by a group of drunken tourists. The group had been made up of two women and two men, all old enough to know better. Even at my young age I could tell they were down from the big city for the festivities. The group had appeared lost and were bickering as to where to go next whilst attempting to retain as much of their drink as possible in their plastic cups. As we had watched the group stumble about, I realised that they were lurching dangerously close to the delicate grottos the town’s children had spent so much time building. Then, to my dismay, I had watched as the first grotto had been stepped on, its light snuffed out, but no regret was shown, only cackles of laughter. More and more of the structures fell as the drunken men and women found entertainment in their destruction, stamping on the tiny shell-houses and extinguishing the small candles.

My great aunt had been furious and screamed at the group to stop, cursing them for destroying such lovingly laid structures, but the group had just turned and mocked her in their thick, affluent voices. Their footwear suggested that they might have been better suited for sipping champagne at charity functions rather than prancing about on our rugged, uneven beach.

However, they quickly tired of their game and the group started to move on, but to my surprise my great aunt had called out after them. “You looking for a place to celebrate? Try the place at the end of the beach, first drink is always on the house.” My great aunt had then gestured towards a distant location, somewhere far off towards the shadowy ‘dark side of the shore’. But I knew there was nothing there. The festivities ended up on the hill near us. Where she’d pointed to lay nothing but old groins and rotting fishermen’s nets. The group had looked back at her, but here had been no gratitude, just a vague nod. Then, linking arms, they had headed off in the direction indicated by my great aunt. Within moments they had vanished into the darkness of the beach, their drunken singing and cat-calling echoing across the cold beach.

My great aunt had wiped my tears and we had stopped a while to do what we could to rebuild the grottos. Although many of the shells had been smashed, we managed to salvage and re-light many of them. I had been so consumed in my work that I’d lost track of time and it had seemed like mere minutes had passed before my great aunt had taken my hand, reminding me that we’d be late for dinner with my parents. As I turned back to admire our work, I noticed that my great aunt had made another grotto, larger in scale than the others and just a short distance further towards the dark side of the shore; a place where I’d always been told never to light one.

Walking back to my great aunt’s house, I had asked her why she had built the new grotto, but there had been no reply. Then, taking my hand, she had quietly told me the following rhyme, repeating it over and over so that I wouldn’t forget it.

‘On midsummers eve when the sun dips below
May candles be lit and shells set aglow
But be wary dear child for when shell grottos light
From deep under the shore there will come a fright
With a bonnet shell black, and veil of sea kelp
And crooked shell claws to silence your whelp
And a skirt made of cockles and barnacled toes
She hollers and cries wherever she goes
For what once was a woman now more shore than wife
She’s drawn by your candles and a hunger for life
And should you get close she’ll crack open your head
And suck out your insides till the sea turns bright red.
So run safely home and tuck up in bed
Or the Grotter will come and you’ll soon be dead.’

That night I slept badly. The sea wind battered my great aunt’s house and the cries of the gulls kept me awake

until late. When I did sleep my dreams were filled with visions of cold glistening shapes moving under thick, black water and of a long dark shadow following me down the beach.

That following day four bodies were found on the shoreline. The victims were quickly identified as visitors down for the festivities. They had all been thrown out of various pubs in town for causing trouble. Toxicology tests showed that the amount of alcohol in their systems suggested they’d been drinking all day and no doubt had stumbled into the sea. A verdict of Accidental Drowning was given.

It was two men and two women.”

Nyctophobias by T.W. Burgess featuring various illustrators is available to buy now for £2.44 at www.gum.co/zxCsx.

All sales go to the Australia Zoo treating wildlife injured by the wildfires.

London Lore: The legends and traditions of the world’s most vibrant city, by Steve Roud

(*Remember to always take candles or litter away with you, and leave nothing behind but footprints!)