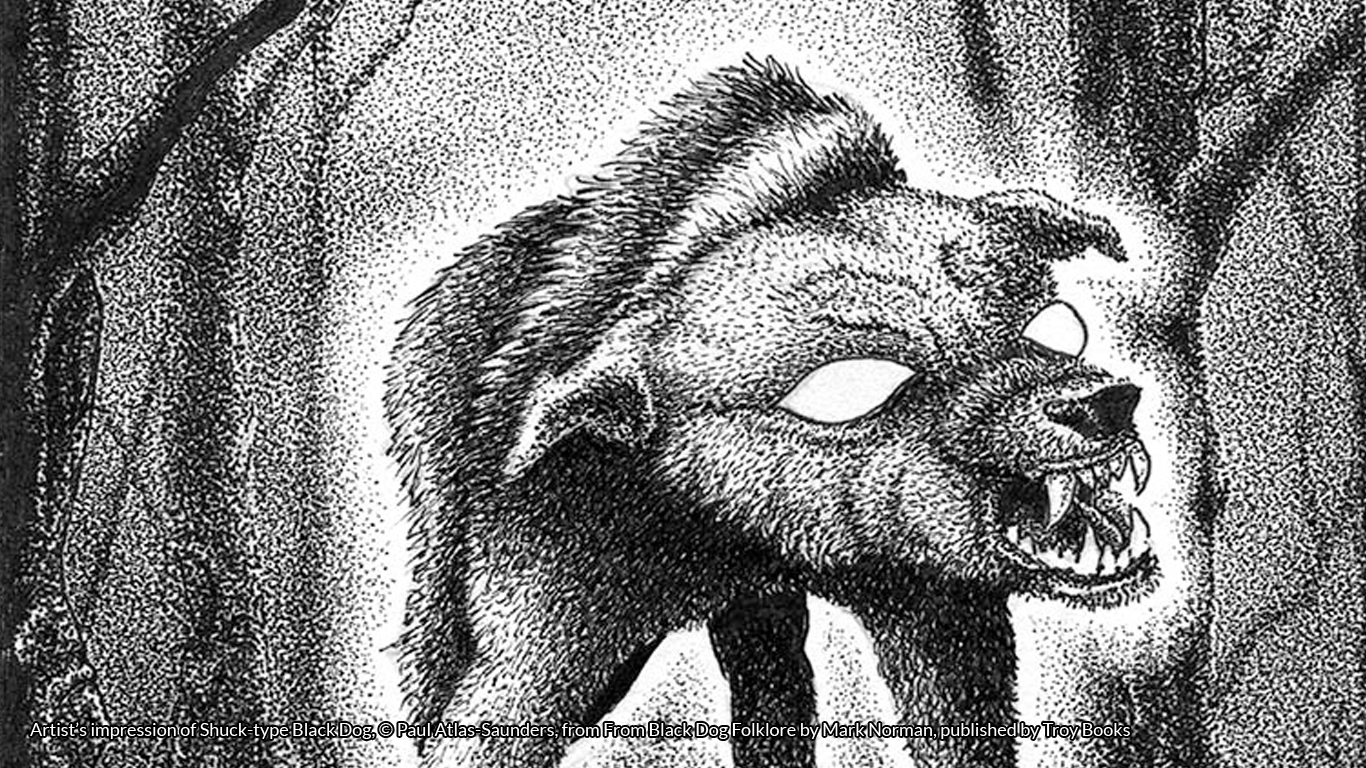 The other day my Facebook feed informed me that proof of the Black Shuck, one of the more ominous variants of black dog apparitions, had been discovered. Which was curious, because six months ago it told me the same thing. And last year. And in 2014. And so did many of the allegedly sensible Facebook groups that I participate in.

May 2014 was the month in which physical evidence of this creature’s existence was finally proven when the skeleton of the legendary Black Shuck was reported upon in the United Kingdom.

At least, it was if you chose to read the correct news reports. In this article I would like to unpick the bones of this story (pun sadly intended) in order to demonstrate both how the facts never get in the way of a good story and also how folklore transmission is still alive and well in the world’s press.

During an archaeological dig at Leiston Abbey in Suffolk in 2013, the skeletal remains of a very large dog were found amongst the ruins. The bones, which were said to belong to a male dog, suggested that the animal stood at around seven feet in height, with an estimated weight of 200 pounds.

Initially reported in the local press, the story was of sufficient interest to be picked up by the Daily Mail, a national tabloid newspaper, and from there inevitably onto the internet news sites. At each step the story became more embellished, and more riddled with factual and folkloric inaccuracies, before Yahoo News triumphantly decreed on its website:

The story is of great interest as a piece of folklore in itself and warrants some deconstruction as a fine demonstration of the way that stories are told, retold and disseminated in the modern age, helping to keep the folklore alive. The local Leiston newspaper presented a fairly short piece which was greatly expanded and illustrated with some fine (over the top and inaccurate) graphical representations of the Shuck by the Mail.

The grave in which the bones were found by an archaeology team from ‘Dig Ventures’ was approximately twenty inches deep and had no obvious markings attached to it. Pottery fragments found at the same dig level were dated to the 16th century. It was therefore decided that this was the “height of the Shuck’s alleged reign” and hence a link to the story could be made.

Of course, it is undoubtedly the case that the skeleton belonged to a large dog, possibly a Newfoundland, which would have been kept at the abbey at the time, as the sensible reportage of the Leiston newspaper happily pointed out. They quoted from an interview with Lisa Westcott Wilkins, the managing director of the archaeology group, who highlighted that the remains were found close to where the abbey kitchen would have been and pointed out that even in medieval times pets were held in high regard.

In point of fact, the only reference to Black Shuck at all in this original article was the headline, which asked in a rather tongue-in-cheek manner: “Are these the bones of devil dog, Black Shuck?”. The rest of the piece concentrated on the archaeology, as the dig was an unusual example of a project which had been crowdfunded. But there is little appeal in that for a national newspaper, who could however get their teeth into the suggestion in the leader for the piece.

The Daily Mail therefore ran with the Shuck link and removed the majority of the archaeological elements of the story altogether, apart from the obvious part of the bones having been discovered by archaeologists. Instead they chose to pad their article (which ran to 11 pages once printed from their online version with illustrations) with extensive mentions of the famous Bungay Black Dog case.

By the time the story was re-edited and published on the internet by Yahoo, there was no doubt that the bones of the Shuck had been found. Their article began:

“The bones of a seven-foot-long hound from hell have been discovered in the grounds of an ancient abbey in the Suffolk countryside.

Black Shuck was believed to have roamed the countryside about 500 years ago. Folk-law (sic) says the giant creature was the hound of hell, with savage claws and burning eyes.

According to the Daily Mail, the beast’s remains have now been found by archaeologists digging at the site of an ancient abbey, located a few miles from where Black Shuck was said to have killed worshippers in 1577.”

So there you have it. Get your news from the internet and you have definite proof that a legendary creature has been discovered. Look at the ‘facts’ that are now stated compared to the original article. It is now a hell hound.

This article is a bit of fun in a world which is all too often supplying us with nothing but bad news. It is a useful example of folklore in action and it serves a valuable purpose in helping to keep the traditions alive, in the same way that paranormal television programmes made “for entertainment purposes only” help to foster a continuing interest in areas to keep rich traditions going in the modern world.

The Black Shuck discovery continues to draw on a motif which has been with us for a long time, and which still affects a number of people in the twentieth and twenty-first centuries, even if they are unaware of the legends. Sometimes they can be completely unaware because of their age. For example, Nikki Hatch sent me this story from her childhood:

“I grew up in Liphook. Just under the iron bridge and turn left. Wheatsheaf
Enclosure – the road leading to the golf course and further on to the coachroad.
My mother was in the habit of walking the dogs in the early evening around dusk.
It was one such evening and I was in a pushchair so I guess I would have been
About 2 or 3 years old (1965/6). The poodles apparently stopped at the crossroads
(where the main road intercepts (sic) the coachroad), staring towards the right
turn and growled. I remember seeing a large black dog. It’s mouth was very red.
It’s coat was rough and coarse. It just stood looking down at me. I apparently
said to my mother ‘Mummy, I don’t like that black dog’. She could see nothing. I
remember it felt threatening although, to my recollection it did nothing.

My mother tells me that she saw a black dog herself only a short distance along
the same path. It was standing on the path looking towards her. She bent to pick
up the poodles and it was gone although she couldn’t see where it could have
jumped without her noticing.”

Nikki says that it was many years before she realised that black dog sightings were so common. At the age that she estimates she was when this sighting happened there was obviously no way that she could have known about, or consciously drawn upon any folk motif surrounding the black dog. So what did she see? Was it a real dog, and if so why did her mother not see it as well? Too many years have passed for us to ever know for certain.

There is an interesting afterword to this, to bring it into the 21st century. Researching the location a little more prior to publishing this story did not turn up any reported sightings of other ‘ghostly’ black dogs for certain. But it did provide a link to the Liphook community website, which yielded a page concerning dogs in the same general area. A person posting on the ‘Local Talkback’ page (a forum for local residents to air their views) discussed an incident where two black labradors were running loose in the road, causing cars to slow down. The writer and a colleague had endeavoured, and failed, to catch the dogs which ran off across a field. Two further people commented on the post, one to say that they had been involved in a serious car accident taking evasive action to avoid loose dogs there, and another to say that they had often seen a single black dog on that stretch of road.

Whilst we should not entertain the possibility too strongly that there is any sort of ‘otherworldliness’ about the dogs being commented upon on this website, the link to Nikki’s story – in the same manner as the Black Shuck’s bones – is the stuff of which folklore can be made in the right (or wrong) hands.

Mark’s new book, Black Dog Folklore is available now from Troy Books: A comprehensive study of the image of the Black Dog in folklore, with an extensive gazetteer of over 700 UK sightings and traditions