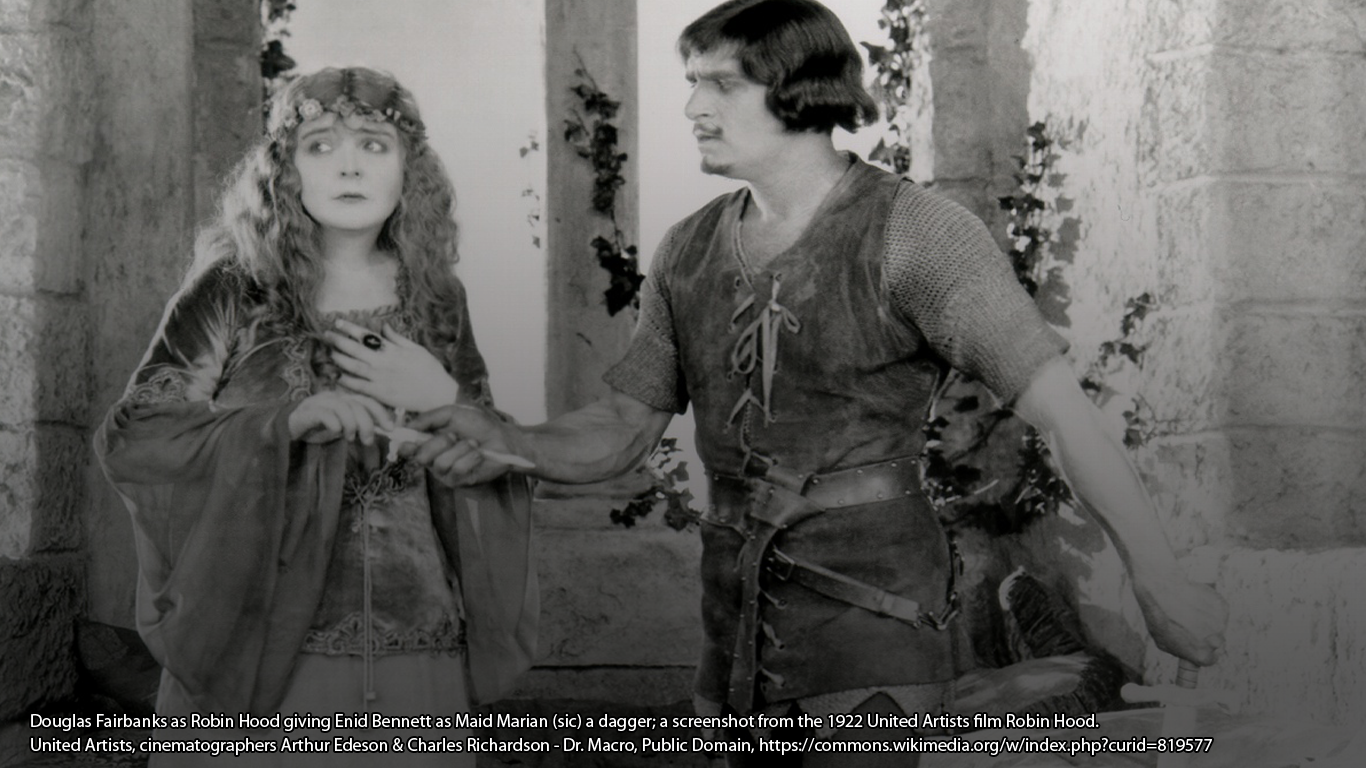 Mention Maid Marian and Sherwood Forest in the same breath, and most people think of Robin Hood’s lady love. The forest outlaw and the noble lady are tied together so closely in modern folklore, popular literature, and movies, it’s hard to imagine one without the other.

Their story is one of the oldest and most enduring of all time, going back hundreds of years. But while Robin Hood is consistently portrayed as the boyish, carefree forest outlaw flaunting authority, Marian’s role in the ballads and tales has constantly changed.

There was no Maid Marian in the early yeoman ballads or the broadside ballads about Robin and his men that followed. A shepherdess named Marian is partnered with a peasant named Robin in early French lyric poetry, but that Robin isn’t an outlaw and doesn’t have the surname of Hood. Marian vanishes from the tales after that. The English outlaw tradition as shown in the early ballads has the character of Robin openly hostile to both religious and social authority. There was no place for Marian—or any other woman—in those stories.

From the 16th century on, “Lady” Marian returned to the tales and became a fixture in the English outlaw tradition. Robin was still an outlaw, but now he was an outlawed noble fighting the injustices of John Lackland’s rule. As landed nobility in that age, tradition required that Robin had to have a lady by his side. Marian has a title too and when she takes to the woods, she doesn’t have an active part in the stories. She’s there to be desired and lauded for her beauty, fill the role of Robin’s lady, and at times, rescued.

Her character and role in the story continued to evolve and change. Marian became a goddess Diana type huntress in some plays, roaming Sherwood as freely as any of Robin’s men, and just as skilled with a bow. She was as at home in the forest as any of the Merry Men. By the time Ben Jonson’s unfinished play, The Sad Shepherd, was published in the mid-1600’s, her character had evolved even further. Jonson made it clear that Marian and Robin had a loving, sexual relationship. Marian becomes more than a possession; she becomes Robin’s willing and eager lover.

As the character of Marian grew and gained what we call agency in Jonson’s play, another narrative developed in parallel—the false Marian. While the real Marian was absent, an imposter would try to seduce Robin, or act in a cruel and troublemaking way that alarmed him. False Marian embodied every negative stereotype of women, is aggressive and elusive, and stands in stark contrast to the real Marian. Jonson was the first to develop the false Marian trope fully and to give Marian the power in the story that she deserved. The real Marian does bow to Robin’s authority as a man in the end, but this play was a different take on her potential as an active female protagonist. It took centuries before other writers followed in Jonson’s footsteps.

Early 19th century Romanticism was a step backward for Marian, stripping her of agency and describing her in girlish terms, but the rise of the novel in the 1800s played a large part in realizing women’s roles, both as authors and characters.

Thomas Love Peacock wrote a novella titled Maid Marian, published in 1822, that went a long way toward defining a default Marian character, one most of us recognize today. His Marian is a capable woman with strong values and strong opinions, but is foreclosed by the male world she lives in. Marian does have a point of view about what happens around her, but Robin dominates and controls it, and while she can shoot and fight, Marian still needs to be rescued in a crisis. Peacock’s novella is the first piece of fiction in the Robin Hood tradition to bear Marian’s name as the title. Other works in the 1800s highlighted Marian, but her role swung between tragic, sad heroine, to taking over Robin’s band while he fought in the Crusades.

By the early 1900s her role in any of Robin Hood’s stories was fading again. Early films showed Marian as a spirited, flapper like young woman who usually ended up in trouble and needed to be rescued. The trope of being overpowered and needing to be rescued, no matter how capable Marian might be, is a stereotype that continued well into the 1990s. 21st century movies and televisions shows have been a mixed bag in terms of avoiding that stereotype.

Novels have done the most to move Marian toward feminism and being her own person, valued for who she is and what she can do, not solely for how she looks. Robin McKinley’s The Outlaws Of Sherwood has a high-born Marian winning the archery tournament disguised as Robin Hood. In The Forestwife by Theresa Tomlinson, Marion Holt escapes a forced marriage by fleeing to the forest and becomes the Forestwife, offering help to poor women. Along the way she gains the help of a poor peasant named Robin. There are other books out there as well and more to come.

It’s fair to say that the role of Marian in any given play, ballad, or novel has reflected the changing role of women in society over the centuries. Those roles also reflect the author’s attitude about what he or she thinks is the proper place a woman holds in the world. Marian has been a wife, a mother, a partner fighting at Robin’s side, an eternally chase maiden and a sexually mature woman. She’s been the property of men and fiercely independent, front and center in the ongoing narrative, and a vague background figure.

Robin’s noble yeoman has been virtually carved in stone for centuries, but Marian’s character is a bit of a chameleon. That’s a huge part of what makes her fascinating and why writers will continue to find new ways to look at her, and new stories to tell.

Win a  copy of Brightfall by Jaime Lee Moyer

The wonderful folks over at Jo Fletcher Books have offered a copy Jaime Lee Moyer’s excellent new novel for one lucky newsletter subscriber this month, with one also going to one of our Patreon supporters!*

Someone is murdering the Merry Men . . .

It’s been a mostly quiet life since Robin Hood put aside his pregnant wife Marian, turned his back on his Merry Men and his former life and retreated to a monastery to repent his sins . . . although no one knows what was so heinous he would leave behind Sherwood Forest and those he loved most.

But when friends from their outlaw days start dying, Father Tuck, now the Abbott of St Mary’s, suspects a curse and begs Marian to use her magic to break it. A grieving Marian must bargain for protection for her children before she sets out with a soldier who’s lost his faith, a trickster Fey lord, and a sullen Robin Hood, angry at being drawn back into the real world.

It’s not long before Marian finds herself enmeshed in a maze of secrets and betrayals, tangled relationships and a vicious struggle for the Fey throne.

And if she can’t find and stop the spell-caster, no protection in Sherwood Forest will be enough to save her children.

A wonderful re-imagining of Robin Hood and Maid Marian, perfect for fans of Katherine Arden, Naomi Novik and Christina Henry.

‘Beautiful inside and out, gorgeously written and filled with bittersweet magic. A lush, immersive read, perfect for readers of Juliet Marillier’ Stephanie Burgis, author of Masks and Shadows

Brightfall by Jaime Lee Moyer is published by Jo Fletcher Books in hardback on 5th September 2019, £18.99.

*Sign up for the #FolkloreThursday newsletter to enter our competitions this month (valid September 2019; UK & ROI only). For an extra chance to receive copies of the latest books and folklore goodies, become a #FolkloreThursday Patron supporter!

Jaime Lee Moyer lives in a land of cactus, cowboys, and rhinestones, while dreaming of tall trees and the ocean. She writes novels about murder and betrayal, friendship, ghosts and magic, and she feels it’s only fair to warn you that all her books are kissing books. Her cats approve of all of this, including the kissing. She was poetry editor for Ideomancer Speculative Fiction for five years and edited the 2010 Rhysling Award Anthology for the Science Fiction Poetry Association. A poet in her own right, she’s sold more than her share of poetry. She writes a lot. She reads as much as she can. Her latest book, Brightfall, is now available from @JoFletcherBooks. You can follow her on Twitter, and visit her website here.