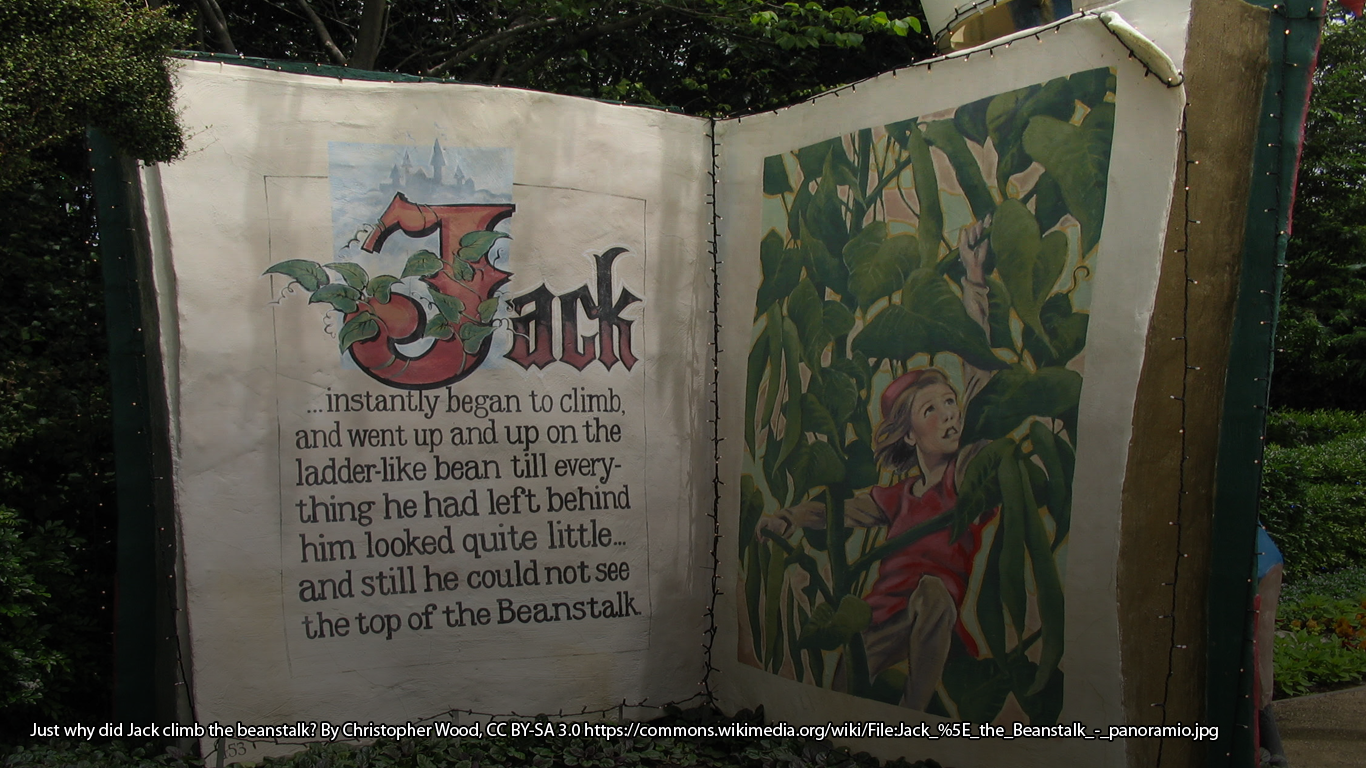 “I’ve got something a lot better to exchange for that cow though, Jack,” said the man. “Something much more valuable than boring old money; something I think you’ll like, a lad of your… discerning taste.” The man’s eyes were twinkling, and out of his pocket he brought a handful of… beans.”

When I introduce children to the ancient craft of storytelling, I often ask them whether they have heard of Jack and the Beanstalk. Usually the vast majority of them put their hands up; it’s impressive, in an age when many children haven’t even heard of Robin Hood. I then ask them to estimate how old the story is. 200 years? 500 years? 1000?

Not even close. Folklorists studying Jack and the Beanstalk story types have traced it back to the split between Western and Eastern Indo-European languages more than 5,000 years ago, told from person to person since that time – possibly, evidence of an unbroken storytelling heritage.

The story of Jack and the Beanstalk seems to run through our DNA somehow, older than many other stories, older than the Lord’s Prayer. Try telling the story to any audience, and as soon as the cow and the beans appear, some of the listeners change. You can almost hear them thinking, “Oh yes, I know this one.”

One of the ‘traditional’ versions of Jack and the Beanstalk can be found in Joseph Jacobs’ late Victorian collection of English fairy tales.  A poor widow has to sell her cow to keep the household going, because her son Jack is good for nothing. On the way to market, Jack is offered some magic beans in exchange for the cow, and his mother throws the beans into the garden in a rage. The next morning, there is a great beanstalk going up beyond the clouds.

Then the sequence of ‘three times’ begins. Jack climbs, and reaches a new land at the top. He walks, and finds a great house where he asks a giant woman for breakfast. She takes him in, but hides him when her son the giant returns.

“Fee, fie, fo, fum, I smell the blood of an Englishman.

Be he alive or be he dead, I’ll grind his bones to make my bread!”

The third time, as Jack is stealing the giant’s magic harp, the giants wakes up and chases Jack all the way home. Jack chops the beanstalk with an axe, and the giant falls and dies. Jack and his mother live happily ever after.

Not all versions of the story are so simple. Benjamin Tabart’s longer 1807 version moralizes the whole affair, giving justification to the actions against the giant by implicating him in the death of Jack’s father, all communicated by an old fairy woman. Other versions variously turn Jack into a giant-slaying hero, a gadabout, or just a teenage kid who found himself accidentally in the middle of an adventure.

The storytelling tradition is a living tradition, but adapting and changing stories can be a controversial issue in the storytelling world. Every teller, if they are good, will get into a story to really understand it and make it work for both them and the listener; however, there is an expectation to honour the content of a traditional tale as you work it, and achieving a good balance can be a tricky process.

When I first started working on Jack and the Beanstalk with an eye to telling it, and subsequently including it in Botanical Folk Tales, I found the character of Jack really unendearing. Jack is an ambivalent character throughout many British folk tales, an accidental hero at best, and this story is no exception. Jack seemed too much of a stereotype to me: the lazy, uncaring male child who always takes, rather than giving, and ends up with the treasure anyway.

But going further into the character, I discovered more of interest. Jack is a thief and an opportunist, pure and simple. He does show courage, and uses his luck well; he does learn along the way; he does end up doing the right thing by his mother. There is something compelling and alive about Jack’s persistence in returning to dangerous territory.

The nature of the story

Jack and the Beanstalk is definitely a horror story, if you put yourself in that giant’s kitchen cupboard to hide with Jack, smelling the cooking smells from the child on the spit in the kitchen grate, and hearing their body-fat pop and sizzle. We will never know the giant’s motives for hating humans. Giant-killing is a recurring pursuit throughout many of our folk tales, and I do feel a little sorry for the giant, no matter how many children he eats.

The giant’s wife is another long suffering woman like Jack’s mother, and in my modern working of the story I couldn’t resist a challenge to these traditional, sexist roles, poking fun at the man-children in the tale, whether giant or human.

How about the landscape itself, the non-humans and non-giants, and the beanstalk? I found myself exploring contrasts of landscape, in both this world and the world above the beanstalk. Many stories ignore the landscape of Jack’s home, and describe the beanstalk-world as a barren and rocky one, a wasteland. But I pondered: what if the world above maintained all those things we have lost in our world? These questions probably owe more than I would care to admit to Enid Blyton’s Faraway Tree, which was perhaps inspired by Jack and the Beanstalk in the first place.

My own version of the story emerged as a play on the character of the Green Man, with the giant battling against environmental destruction, and Jack slowly observing the changes all around him. Jack’s house was the result of a 1970s ‘Good Life’ dream surrounded by industrial farming. I added to the giant’s refrain with another: ‘You take too much!’ No wonder he eats humans, when he can get them.

As with any story told to others over a period of time, Jack and the Beanstalk will keep changing for me, and the version I will be telling in five years time will be different to the one I am telling today. I now know this story is much more than a load of old beans, and I hope I have inspired you to consider it afresh.

“I wonder if you know how many beans make five,” said the man.

“Bean, bean, bean and a half, half a bean and a bean,” said Jack, sharp as a needle.