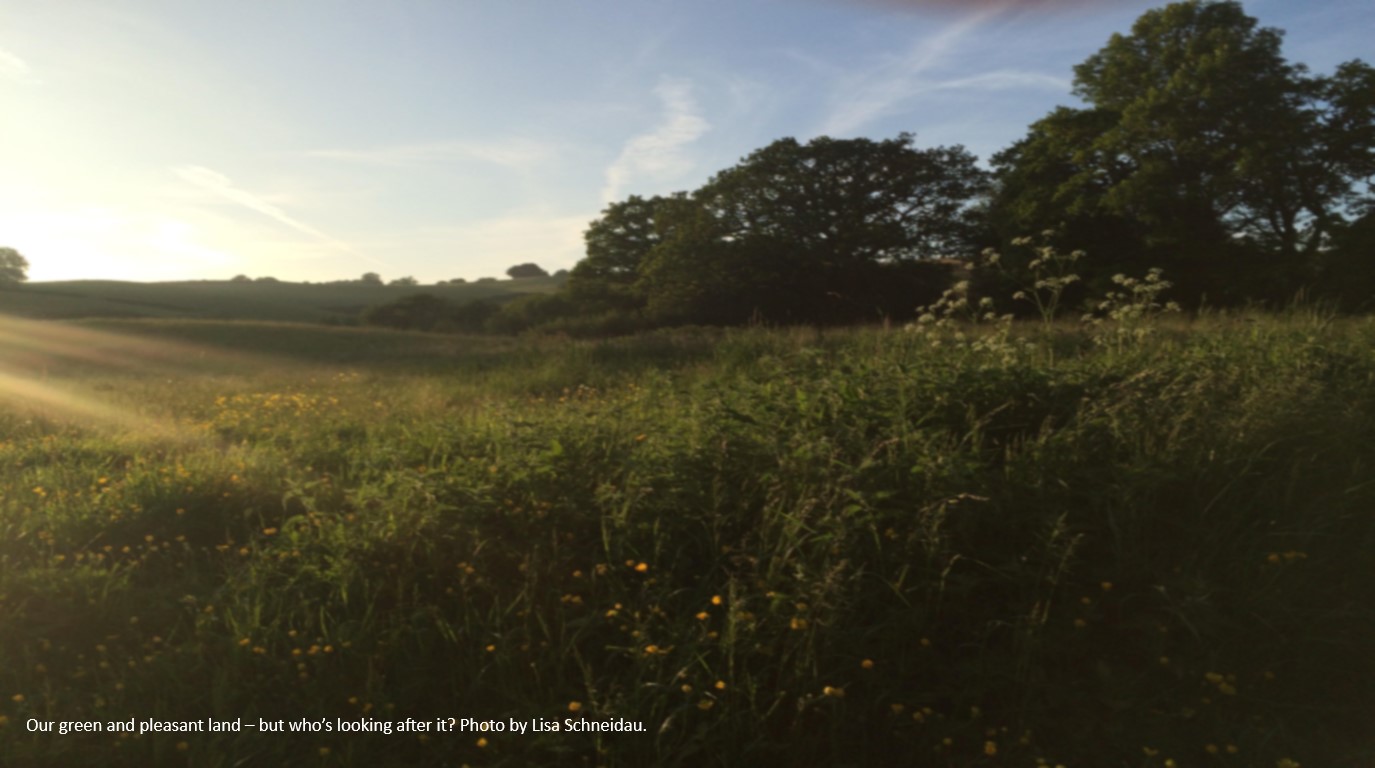 Modern farming has transformed the landscape of Britain and Ireland, to the detriment of nature. Lisa Schneidau argues that the old folk tales of the land are more relevant to us than ever.

It’s July and the summer is at its height. Here in Devon where I live, the hay-cut is on its way and the fruit is ripening. I am lucky enough to work with a Wildlife Trust, helping farmers to manage their land for nature. I am also a storyteller, working with traditional story to provoke and inspire.

A few years ago, I got curious about the old stories of the British countryside, our own landscape, and the green leafy living things that shape it. Some of the stories ended up in a book; but along the way, I discovered something very interesting about how folk tales reflect our relationship with the land.

The Power of Nature

‘This is my land!’ the boggart insisted. ‘You’re trespassing. Go somewhere else.’

‘I’ve got all the paperwork.’

‘Paperwork means nothing to me, I’m a boggart.’

From ‘The Farmer and the Boggart’

Ever since humans started to settle and practice agriculture, we have been in a battle with nature, trying to work with it so that we can survive. Britain and Ireland are blessed with much fine land and good growing conditions, but drought, famine and disease have always been close at hand.

We have also constantly fought each other to maintain and gain rights over land. Land produces food and timber. Land is power. Few were more acutely aware of this than William the Conqueror, who divided up the lands of England among his mates after 1066 and took no prisoners.

So what was it like living in the countryside in the ‘old, old days’? Thanks to the influence of Victorian romantics, we may fondly imagine a rural idyll in these isles, a time of dappled sepia sunlight, flower meadows, wandering animals and ancient forests.

The truth was very different. The life of our labourer ancestors was tough, brutish and short. In 1395 the French author Jean Froissart wrote¹:

It is the custom in England… for the nobility to have great power over the common people, who are … bound by law and custom to plough the field of their masters, harvest the corn, gather it into barns, and thresh and winnow the grain; they must also mow and carry home the hay, cut and collect wood….

Life was even more difficult when there was a drought, a deluge or a freeze, or if disease took hold of people or livestock or crops. Nature could mean life or death, misery or survival: no wonder it was seen as all-powerful, sharing our lives as the seasons turned, for better or worse.

Working with the Wild

Our folklore reflects this fear of the power of nature. You can use rowan berries to protect against malevolent spirits, and thank the Little People by leaving a dish of cream and a piece of bread out for them every night. Charms are said to be sure of a good harvest, and celebrations are held for the death of John Barleycorn. Sure enough, in my search for traditional stories about the plants of Britain and Ireland, the spirits of the land came through loud and clear.

Every morning at first dawn, they stood on the doorstep, with salt and bread in their hands, watching and waiting for the green mist to rise from the fields and tell them that the earth was awake again, the life was back in the trees and plants and seeds, that spring was truly beginning.

From ‘The Green Mist’

The stories in Botanical Folk Tales of Britain and Ireland are many and varied. There are tales about giant pumpkins and travelling trees, willows that talk and an enchanted coat of moss; and stories from all through the year, from the snowdrops braving the Highland winds and piskie tulips by the river Tamar, to bad-tempered dandelions, chattering junipers, fields full of ragwort and magic apple trees.

Faery, Phenoderee, Little People or quite simply Them – here is the faery spirit writ large. These supernatural mischief-makers live by different rules to humans, and they can cause problems for no apparent reason. Sometimes they are outwitted by clever humans (boggarts can be very unsophisticated). More often, though, they will dole out justice to the unsuspecting people crossing their path.

But the more I have worked with these stories, the more I am convinced that the Little People also represent the life of the land and the other species that we share this place with. Respect for the wild will lead to reward and protection, but woe betide the arrogant human who thinks he knows better than nature.

Once the tree was cut down, and lying sorry on the ground, the farmer couldn’t help himself: he dug under the roots of the tree to see whether there was any gold. But there wasn’t any, only a heap of withered leaves.

‘A load of old rubbish,’ said the farmer. ‘Just like the fairies.’

Then he turned around and there was his whole farm burned to nothing but glowing ash, and a laughing voice said, ‘What a load of old rubbish.’

From ‘The Blackthorn Tree’

Reaping What we Sow?

The Industrial Revolution meant more mechanisation of agriculture, fewer people working on the land and more in the cities. Since the Second World War, agriculture has become a business of chemicals and yields and supply, and the land is little more than a substrate for growing profit. Humans have more power over nature and more technology now, and the stakes are higher.

These days, our ‘green and pleasant land’ is often anything but. Fields of bright green grass are sterile places with no room for wildflowers; acres of cereals are more like factories than farms. Yet there are still those people who care for the land and everything that lives there, farmers who grow food with nature in mind, and charities who hold nature reserves in trust for the future.

Both the farmers were curious now. ‘What on earth are you doing?’ they said.

‘Well,’ said the little old lady, getting up and wiping the mud off her hands, ‘I’ve asked the land for its opinion. And the land says that you belong to it.’

Nature is responding to industrial agriculture in kind. Bees and other insects are in catastrophic decline², and the effects of climate change are starting to show. The battles continue, and I believe the old stories are more relevant than ever.

In the modern world, many of us live in cities and rely on supermarkets for our food – we barely give a thought to the land that provides for us. Yet we are more connected to the land than we might know. What we choose to eat, and how we vote, can be more or less responsible for what happens to the nature of these islands – and perhaps what it might do to us in return.

Next time you open a packet of vegetables from the supermarket, spare a thought for where they grew, how they were grown, and whether there are any Little People hiding under the leaves.

The lovely team over at The History Press have offered a copy of Lisa’s amazing new book of botanical folk tales for four lucky #FolkloreThursday newsletter subscribers this month, with a copy also going to one of our Patrons*!

‘The islands of Britain and Ireland hold a rich heritage of plant folklore and wisdom, from the magical yew tree to the bad-tempered dandelion. Here are traditional tales about the trees and plants that shape our landscapes and our lives through the seasons. They explore the complex relationship between people and plants, in lowlands and uplands, fields, bogs, moors, woodlands and towns.’

All story quotes are from Lisa’s book Botanical Folk Tales of Britain and Ireland (2018, History Press).