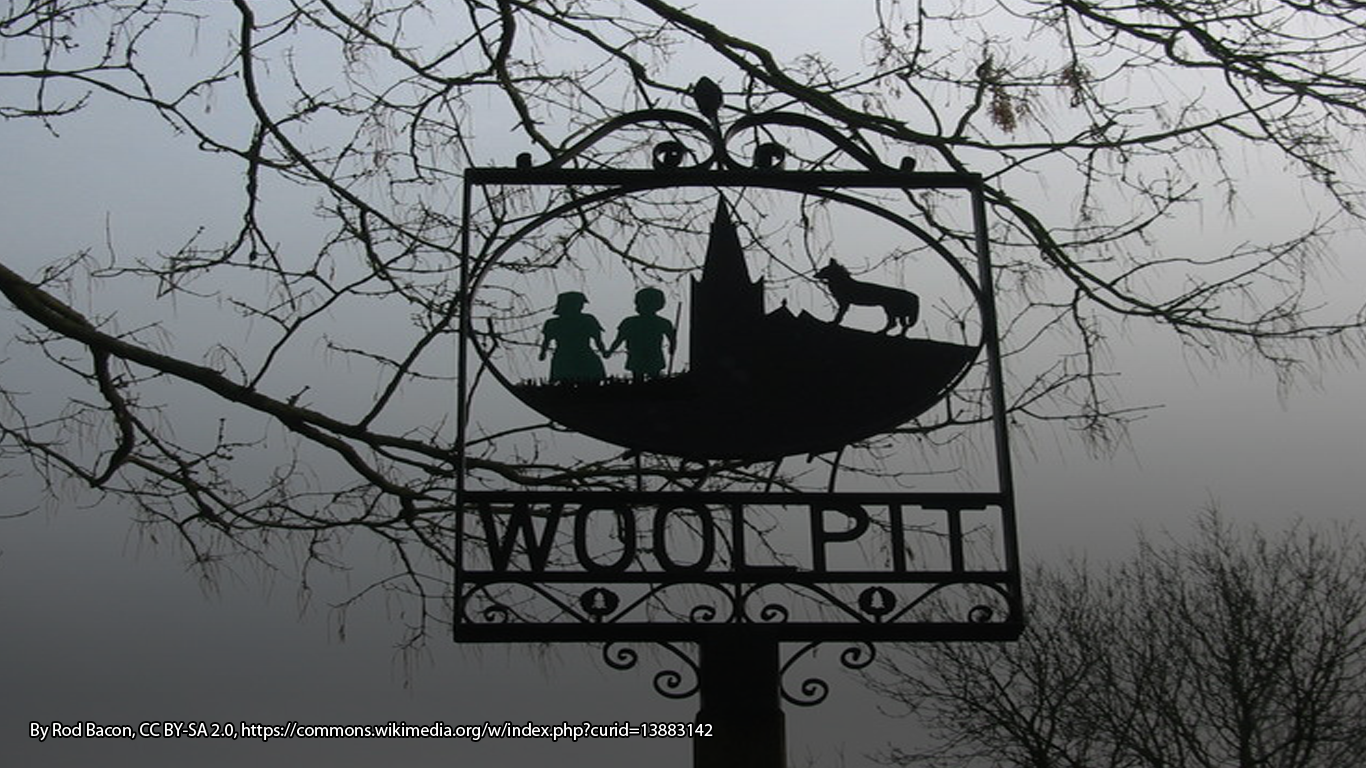 Suffolk is the easternmost county of England, jutting out into the North Sea and bounded to the south by Essex, to the north by Norfolk and to the west by the Cambridgeshire Fens. The county is largely devoted to intensive arable farming and proverbially flat, its gentle landscape densely packed with attractive villages, hamlets and market towns. Suffolk might seem the very last place to look for fairylore; after all, most of us have grown up with the idea that belief in the fairies flourishes in wild, untamed places, and specifically in the ‘Celtic’ areas of the British Isles – Scotland, Wales, Cornwall and Ireland. The fairy folklore of English counties is often overlooked, and this is especially true of eastern England – the largely flat lands facing the North Sea where Germanic peoples first arrived in the 5th century and founded what became England. In the 19th and 20th centuries many folklorists believed fairies were a ‘Celtic’ phenomenon, noting that belief in the good folk seemed strongest in western English counties adjacent to ‘Celtic’ lands, such as Cheshire, Devon and Northumberland. Looking for fairies in the most ‘English’ part of the British Isles was, in their eyes, a non-starter. Some folklorists even tried to explain away East Anglian fairylore as something imported by Irish seasonal workers.

The diligent work of contemporary folklorists such as Jeremy Harte, Jennifer Simpson and Simon Young is now showing that the idea that fairy belief was confined to the wilder and more ‘Celtic’ parts of England is completely unsupported by the evidence; it was an assumption based on preconceived ideas about fairies as part of the ‘Celtic’ world. Nevertheless, fairy belief is more prominent in some parts of England than others, and few would go looking for fairylore in East Anglia. Perhaps because I was born in Suffolk and developed a fascination with folklore at an early age, I was more inclined than most to look for fairy belief in my native county. In fact, Suffolk has significantly more fairylore than the other counties of East Anglia (Norfolk and Cambridgeshire). The county is also the home of three well-known stories that are among the most important survivals of medieval fairylore.

The first and best known of these stories is the tale of the Green Children of Woolpit. According to two medieval chroniclers, reapers in the fields around the village of Woolpit, near Bury St Edmunds, discovered a boy and a girl with green skin who spoke no known language. The children were unable to eat any food apart from green beans, and the boy soon died, but the girl lived to adulthood and gradually lost her green colour. She later explained that the children came from a place called St Martin’s Land, where it was always twilight, and had wandered through underground tunnels into the world of human beings. Although many attempts have been made over the centuries to provide naturalistic, reductive explanations for the story of the Green Children, the story bears certain telltale narrative marks of fairylore, so that it is fairly safe to categorise it as belonging to this genre of folklore.

The second medieval story associated with Suffolk concerns an invisible spirit that appeared at Dagworth Hall, near Stowmarket. The spirit called herself Malekin and behaved a little like a modern-day poltergeist. However, Malekin befriended one of the maids and told her that Malekin had been a human child, stolen by the fairies from the fields near Lavenham and forced to live with them for seven years. The Malekin story is one of the earliest appearances of the ‘changeling’ motif in English folklore. The third medieval Suffolk story is the tale of the wild man of Orford. Fishermen off the coast of Suffolk caught a swimming man in their nets whose body was completely covered in hair. Like the Green Children, the wild man spoke no known language and was imprisoned, eventually escaping when his captors let down their guard.

All of these events are supposed to have taken place at around the same time, in the late twelfth century – a time when there was a hunger for marvels and an eager desire to understand the mysteries of the universe. The stories speak to a medieval belief in communities of otherworldly beings existing alongside our own, even if the chroniclers do not explicitly identify those beings as fairies. Yet Suffolk also bears the mark of older fairy beliefs. The village of Elveden (‘valley of the elves’) on the western edge of the county is one of only a handful of English place names to reference the elves directly, and local lore even identifies the dip in the landscape that led the Anglo-Saxons to give the place its name. Suffolk also had its fair share of magical practitioners who drew on the help of the fairies, and the 1499 trial of Marion, Agnes and John Clerk for seeking the fairies’ aid to find buried treasure in Bury St Edmunds is one of the best recorded of its kind.

In the nineteenth century, Suffolk was the source for one of the best known English fairytales collected in the nineteenth century: ‘Tom Tit Tot’, the English version of ‘Rumpelstiltskin’, which was told by a nurse to her charges in the village of Barningham. Originally published in an obscure Ipswich newspaper, ‘Tom Tit Tot’ soon became the subject of intense interest and debate among the leading folklorists of Europe. Perhaps the most striking examples of fairylore collected in Suffolk, however, were the narratives recorded by the Rev. Arthur Hollingsworth, vicar of Stowmarket, in the 1840s. Elderly residents of the town informed the vicar that, many years before, fairies entering the town and causing trouble in the high street had been a regular problem – a very rare English example of fairies appearing in an urban setting.

The fairies of Suffolk were known as ‘farisees’ (pronounced like ‘Pharisees’, and frequently confused with Jesus’ opponents in the New Testament by illiterate parishioners), and they were said to be small, with sandy hair and blue eyes. The surviving evidence suggests that traditional fairylore had largely disappeared from Suffolk by the outbreak of the First World War in 1914, surviving largely in customs such as the keeping of a ‘farisee loaf’ (really an echinoid fossil resembling a small loaf) next to the bread oven to encourage the bread to rise. Horsemen also continued to hang ‘hagstones’ in stables to prevent the farisees riding the horses during the night. However, small numbers of people continued (and still continue) to claim they have encountered fairies in the county. I came across one claim that a young girl saw fairies in the flames that consumed a burning factory in Stowmarket in the 1960s – perhaps a residual memory of the town’s association with the fairies.

I first decided to study Suffolk’s fairylore in 2006, so my book Suffolk Fairylore has been over a decade in the making. It is the first book ever devoted to the fairy traditions of a single English county, and Suffolk might seem an unlikely choice for such a project. However, there is sufficient evidence from Suffolk to make it possible to reconstruct a chronological survey of the changing face of fairylore in one locality over a very long period of time. The county stands out, not so much for the richness of its fairylore as for its persistence through time. The book is intended to be a case study of the quiet development of fairy beliefs in an English county not renowned as a home of fairies. The strength and persistence of fairy belief in Suffolk challenges the notion that fairies are inhabitants of wild places – it turns out that fairies can survive and thrive in flat, agrarian landscapes as well as rocky hills and glens.

Win a copy of Suffolk Fairylore by Francis Young

The wonderful folks over at Lasse Press have offered a copy of Francis’s excellent new fairylore book for a lucky #FolkloreThursday newsletter subscriber this month!

‘From the Green Children of Woolpit to the tale of Tom Tit-Tot (Suffolk’s own version of Rumpelstiltskin), the county of Suffolk is surprisingly rich in lore and legends about fairy realms and hidden inhabitants. The county’s place-names and agricultural customs testify to past belief in elves and fairies, beings that were still feared and held in awe by Suffolk people until the twentieth century. Drawing on medieval chronicles, place-name studies, archaeology, local newspapers and the collections of folklorists, Suffolk Fairylore (the first book to explore the county’s fairy beliefs) offers a detailed account of what Suffolk people believed about the `farisees’, and shows that Suffolk is as rich in fairylore as any English county. The book includes a gazeteer of all the places in Suffolk historically associated with the fairies, as well as appendices covering Suffolk’s medieval fairy narratives and the fairy tales collected in the county in the Victorian period.’

Sign up for the #FolkloreThursday newsletter to enter (valid November 2018; UK & ROI only).