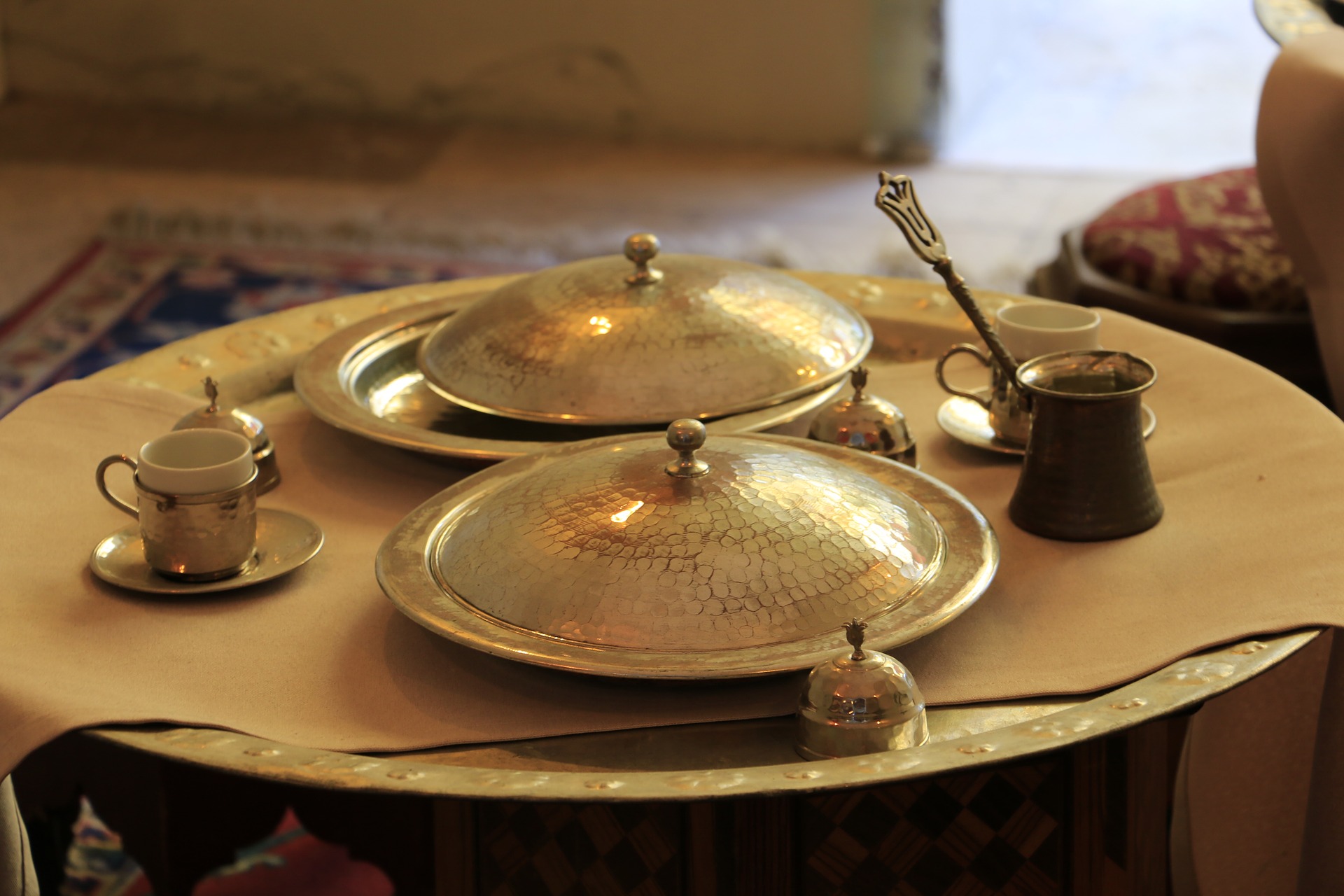 I write thrillers, set in Ottoman Istanbul in the 19th century: you may have heard of them. I’m not trying to boast when I say that they have appeared in forty languages: it’s a fact. When I was writing the first one, The Janissary Tree, I gave my hero Yashim a short round of shops and market stalls close to his home in Istanbul, where he can buy everything he needs for supper. Among them is the Libyan baker, who can produce something more rustic and tasty than the delicate white bread served in Istanbul restaurants.

So far, so good. It was when I tried to give Yashim’s baker a loaf of eftazimo that my troubles began – and I discovered the old curse.

Eftazimo, the name by which it is known on Crete and other Greek islands, is a bread of very ancient origin, a fact which in itself should have set alarm bells ringing. Not that it mattered, because when I first came across the recipe I was cooking fictional bread for a fictional character, and that sort of bread always turns out well if you want it to. Anyway, I didn’t know it was ancient, and I didn’t know – yet – that it was called eftazimo. I found it as chickpea bread in a jolly book of Turkish recipes, put out by a Boston restaurateur, and I simply borrowed that interesting idea for my story.

The idea is that the leaven, the yeast, is provided by crushed chickpeas. You will be familiar with sourdough starters, some of which have apparently been raised and nurtured and kept alive for decades. I’ve eaten bread made from starters – sometimes called The Mother – that claim descent from pre-revolutionary Russia, reaching 21st century Dorset by way of the Crimea, white Russian exile in Istanbul, and then the usual route Athens-Paris-New York. Look after your Mother, and she will feed you in return. But that’s another folkloric avenue to explore, another time.

Here, we are dealing with chickpeas, which in America are often known as garbanzo beans. With lentils and broad beans, chickpeas were the only legumes known to the Old World before the discovery of America. The great Roman orator Cicero, after all, was named after the chickpea, cicer; perhaps, as Plutarch claimed, because the nose of one of his ancestors had a chickpea-like cleft at its tip. The chickpea goes back a long way. As, of course, does bread.

It wasn’t just the chickpea starter that drew me to this unusual bread: it was the addition of an infusion of bayleaves. The water for the dough is, according to the recipe, first boiled with bayleaves, and allowed to cool. Imagine the scents! I could probably get a paragraph, I reckoned, out of Yashim and his friend Palewski fictionally breaking this bread together at their Thursday evening dinners, in Istanbul.

I made some notes, and moved on. The difficulty only arose when, after writing five Yashim novels, I was persuaded to collect all his recipes together. The detective series was about to get its own accompanying cookbook, called Yashim Cooks Istanbul: Culinary Adventures in the Ottoman Kitchen.

This chickpea bread was, if anything, an Ottoman speciality. Following the recipe in the Turkish cookbook, I blithely attempted to make it at home.

No disrespect to the Boston restaurateur, or his book, but the loaf wouldn’t come right. Just preparing the starter was a trial: half the chickpeas should be crushed, and other half left whole, before they are invited to ferment in warm water. Now, chickpeas are hard, and the pestle and mortar merely sent them flying around the room. The coffee grinder broke down – actually bust, binnable. Eventually I compromised by beating them with the pestle under a cloth: an appearance of secrecy that coincidentally chimed with what I later discovered about this bread.

The chickpeas neither foamed, nor developed much, in warm water: a non-starter of a starter, really. But I infused my bayleaves, and made the bread, using the special flours the cookbook suggested. It came out looking ok, but it was extremely tough. It also contained tooth-breaking fragments of dry chickpea. The taste was wonderful, the scents divine.

That was when I began to investigate where I had gone wrong. It was Paula Wolfert’s Mediterranean Grains and Greens that revealed that the bread I had taken as an Anatolian speciality was, in fact, far more widespread and was known on Crete as eftazimo. A Cretan website further explained that the starter was known as ‘kounenos’, and added this advice:

‘If there are no bubbles, then it has not worked, and a second batch must be made. Do not throw away the first. If the second attempt fails, then you could try a third time. If this attempt doesn’t work, then this would be the time to stop.’

Not so much advice, as a warning. I had never before read a recipe that sounded quite so portentous. I had, in truth, made a second, and a third attempt. The Cretan recipe seemed aware of this. I was being warned. I should stop.

The thing is, I wanted the recipe to work: I had my intro all ready, describing it as ‘a sturdy loaf which uses a temperamental homemade starter instead of yeast, and is delicately scented with bay leaves.’ But the more I explored its story, the more I understood that eftazimo, or its Turkish or Albanian cousins, nohut ekmeği, belonged more firmly in the world of magic and illusion than between the covers of an Ottoman cookbook.

The bread appears in Diana Farr Louis’ and June Marinos’s Ionian cookbook, Prospero’s Kitchen, which talks about Ludwig Salvator, Austrian Archduke, son of the Grand Duke of Tuscany, who made his home on Majorca but encountered eftizamo on his travels through the Ionian Sea in the early 1860s. An intensely attractive man, he was no stranger to the dangers of the Evil Eye: his first love was a young Archduchess who, incredibly, burned to death when she hid a cigarette from her father behind her back. A later lover, Catalina Homar, astonishingly contracted leprosy, in Jerusalem, and died in 1905. More to our purpose, only the year before Salvator had written that to make this bread successfully you needed a black-handled knife, a red blanket and a holy book.

“to make this bread successfully you needed a black-handled knife, a red blanket and a holy book”

This was something of a stretch for Yashim Cooks Istanbul. Anyway, the web was full of blogging bakers, each lamenting their failure with one or another version of eftizamo. Reluctantly, I dropped the bread from the cookbook.

Paula Wolfert’s research confirmed what I had begun to suspect. Her informant, a capable Cretan woman, explained that in Greece nuns are forbidden to make or eat this loaf; it attracts the Evil Eye, and spoils easily. Of course it smells good: of course steps have to be taken to ward off jealousy. Village women bake it secretly at night, burning old leather shoelaces in the fire to disguise the smell.

“in Greece nuns are forbidden to make or eat this loaf; it attracts the Evil Eye”

Folklore, and belief, are often aspects of empathy, a sort of ritualized understanding that embraces the uncertain region between objective reality – the world, among other things, of cookbooks with working recipes – and the netherworld of spirits, immutable traditions and oblations. More superstition attaches to food and eating than any other human activity, bar death. From major religious taboos like eating pork, to minor interventions or offerings to, say, the ever-absent Mr Manners, the way we eat, and what, and how, is constantly being brushed up and barricaded by a fiendishly complex set of traditions and beliefs.

The eastern Mediterranean, which once fell under the rule of Ottoman Constantinople, is a superstitious place at the best of times. I put out Yashim Cooks Istanbul: Culinary Adventures in the Ottoman Kitchen to acclaim, and it is one of NPR’s 300 Best Books of 2016. But it travels without the chickpea loaf. I regret it, in a way.

I give it here, with mixed feelings.

You have been warned.

Starter, made the day before the bread

Reduce half the chickpeas to rubble in a mortar, or grind them roughly in a coffee mill in small batches. Stir them up with the other starter ingredients, and keep the bowl warm overnight. The airing cupboard, a radiator, or a very low oven would do. The starter will eventually bubble, if it’s warm enough, but the time it takes does vary: sometimes a couple of days, if the chickpeas are old.

Next day, bring the bay leaves to a boil in 700ml of water and simmer for five minutes with a lid on. Discard the leaves and let the water cool. Once it is at room temperature, mix the water with the two kinds of flour, the salt and the starter. You want the dough sticky. Knead it for a couple of minutes on a floured board, and put it in a bowl, covered with a cloth, to rest somewhere warm again for a few hours, as it starts to inflate.

Set the oven at 200C. Oil a 10” cake tin and fill it with the dough, making a few slices on top with a sharp knife. Brush the dough with olive oil, sprinkle on the topping, and bake in the middle of the oven for up to an hour. If you put a pan of hot water in the oven twenty minutes before you start it will help create a good crust.

Turn out the bread, cover and rest. The chickpeas, scattered through the loaf, may be completely soft.

Jason Goodwin is a historian and crime writer whose bestselling Yashim detective series is set in 19th century Istanbul. The Janissary Tree won the Edgar Award for Best Novel and the series has been translated into over 40 languages. He is the author of Lords of the Horizons: A History of the Ottoman Empire, among other award-winning nonfiction. Yashim Cooks Istanbul is his first cookbook. He lives with Kate and their children in Dorset. ‘When you read a historical mystery by Jason Goodwin, you take a magic carpet ride to the most exotic place on earth.’ New York Times. Visit his website here or follow him on Twitter.