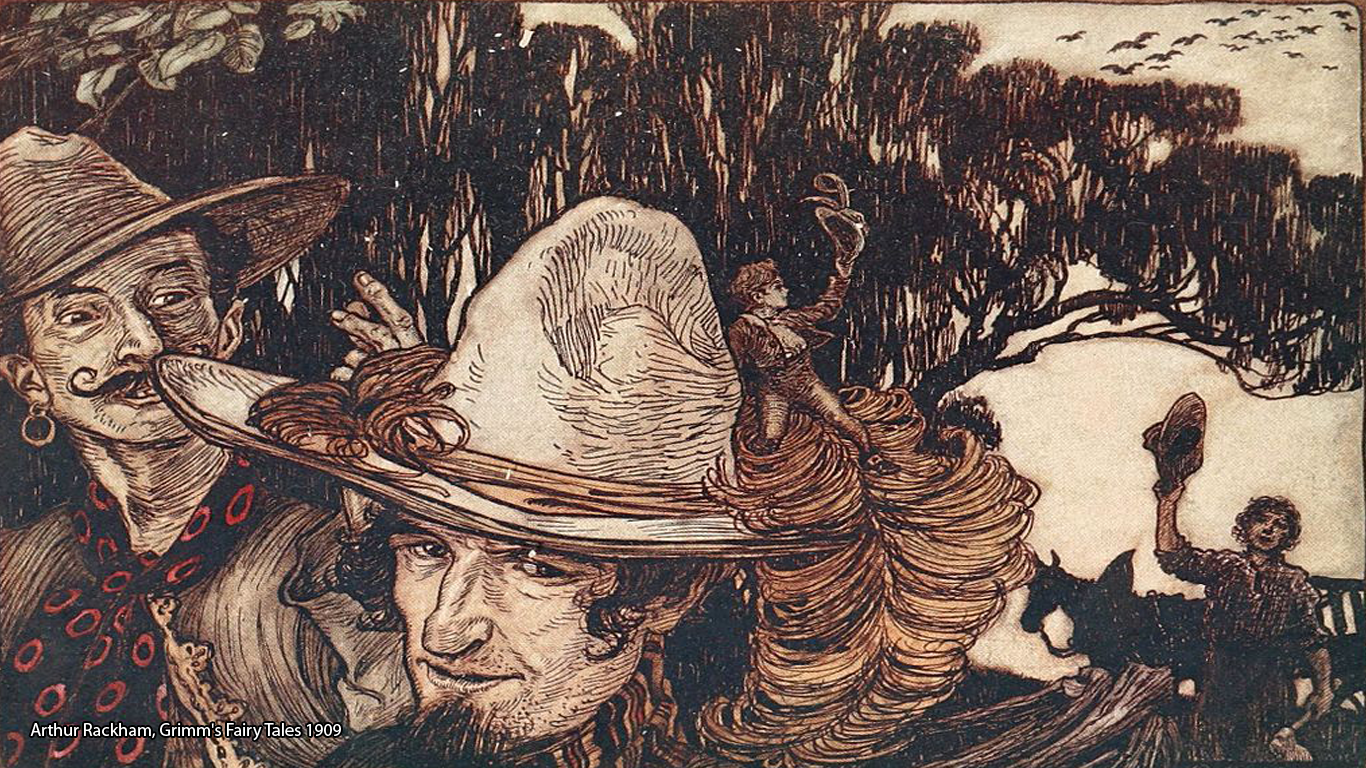 Who are the folk, and what is their lore? Humans have been making and sharing culture from the time we first looked up at the stars and told stories about them, sang a lullaby to a fussy child, or shared a recipe. So in a general sense, we are all the folk, while the customs and traditions we create together constitute the lore. However, the academic study of folklore is far younger than its subject of interest, and it was conceived in the context of romantic nationalism.[1]

Early folklore collectors such as Jacob and Wilhelm Grimm held the view that the folk were rural countrymen and countrywomen whose lore was rapidly being lost to modernity and with it a sense of national spirit. Unfortunately, the brothers Grimm combined a saved-from-the-fire approach to folklore collection with a tendency to sanitize the material they found for literary and ideological reasons.[2] Other nineteenth-century collectors thought the most ancient vestiges of folk belief might be uncovered in the dwindling supply of lore they found if only it were properly examined, but at least their approaches were more rigorous. For example, Wilhelm Mannhardt made use of a robust questionnaire in his collection of European agricultural rituals.[3] Still others thought the beliefs represented in folklore might be a product of human mental evolution along an imagined timeline from savagery to civilization. Max Müller was among them, a philologist with an interest in India who propagated ideas about “the folk-lore of the Aryan nations” that were later debunked.[4] From these and other nineteenth-century conceptualizations, we have a composite representation of the folk as rural peasants in possession of lore from a more ancient and savage time in the form of stories, songs, and other objects in need of salvaging.

Twentieth century folklore scholars, themselves the beneficiaries of previous efforts to define the discipline, revisited these conceptualizations. Alan Dundes asserted that the folk were “…any group of people whatsoever who share at least one common factor,”[5] which meant that geographical, religious, occupational, and other kinds of communities were comprised of folk, and these people were both bearers and creators of lore. Richard Bauman brought a bit of nuance to this idea when he wrote that the folk were people whose social identities mattered in the context of a given performance of lore.[6] Bauman’s scholarship was part of a larger analytical shift as scholars came to realize that objects of folklore studied in isolation were missing the performances that gave them voice.[7] Dan Ben-Amos put it best when he wrote that “In its cultural context, folklore is not an aggregate of things, but a process – a communicative process, to be exact”[8] and defined folklore as “…artistic communication in small groups.”[9]

These days, folklore is a broad discipline. Folklore scholars have studied the importance of molasses in the traditional Newfoundland diet, roadside crosses and their place in public expressions of grief, the practice of Neo-Pagan religion in the Ukraine, expressions of ethical belief in animal rights demonstrations, and many other elements of human culture. You can also find folklorists in the public sector; helping communities preserve their intangible cultural heritage, highlighting issues of race and class in museum exhibitions, facilitating intergenerational transmission of traditional boat-building techniques, helping domestic abuse survivors tell their stories, and so on. We still study what you might expect as well; legends, ballads, märchen, children’s games, vernacular architecture, and other such topics.

Still, some argue the discipline has gone too far in its eagerness to view lore as performance rather than object. For example, we know the Satanic ritual abuse narratives circulating in the 1990s were expressions of a recurring moral panic rooted in legend transmission. Studying similar legends, like the ones circulated during the sixteenth century European witch hunts, could give us important insights about both sets of narratives and the effect they had on people. That kind of scholarship might be useful during future moral panics. However, the only context we have for the transmission of those earlier legends is historical, and deriving an understanding of performance from documents over five hundred years old is a challenge, to say the least. So we would have to study the texts themselves.

From a theoretical perspective then, folklore is both a traditional text from a culturally discrete community and a performance with an audience whose social identity matters in the overall context of the event. With this in mind, how about we share a little lore of the folk together? This Thursday, tweet one of the following with the hashtag #FolkloreThursday: 1) a fairy story from your part of the world, or 2) a family recipe you don’t mind sharing online. Both have textual and performative elements, since fairy stories are texts that come to life when they are told, and recipes are texts that come to life when they are followed! Thank you for reading. You can find my other discussions of folklore on Twitter under the #FolkloreandFiction hashtag.

[6] Bauman, Richard. 1972. ‘Differential Identity and the Social Base of Folklore’. In Towards New Perspectives in Folklore. Austin: University of Texas Press: 38.

[8] Ben-Amos, Dan. 1972. ‘Toward a Definition of Folklore in Context’. In Towards New Perspectives in Folklore. Austin: University of Texas Press: 9.

Ceallaigh S. MacCath-Moran (C.S. MacCath) is a PhD candidate of Folklore and a writer of fiction, non-fiction and poetry whose work has been shortlisted for the Washington Science Fiction Association Small Press Award, nominated for the Pushcart Prize, and nominated for the Rhysling Award. She lives in Atlantic Canada. Visit her website or follow her on Twitter.