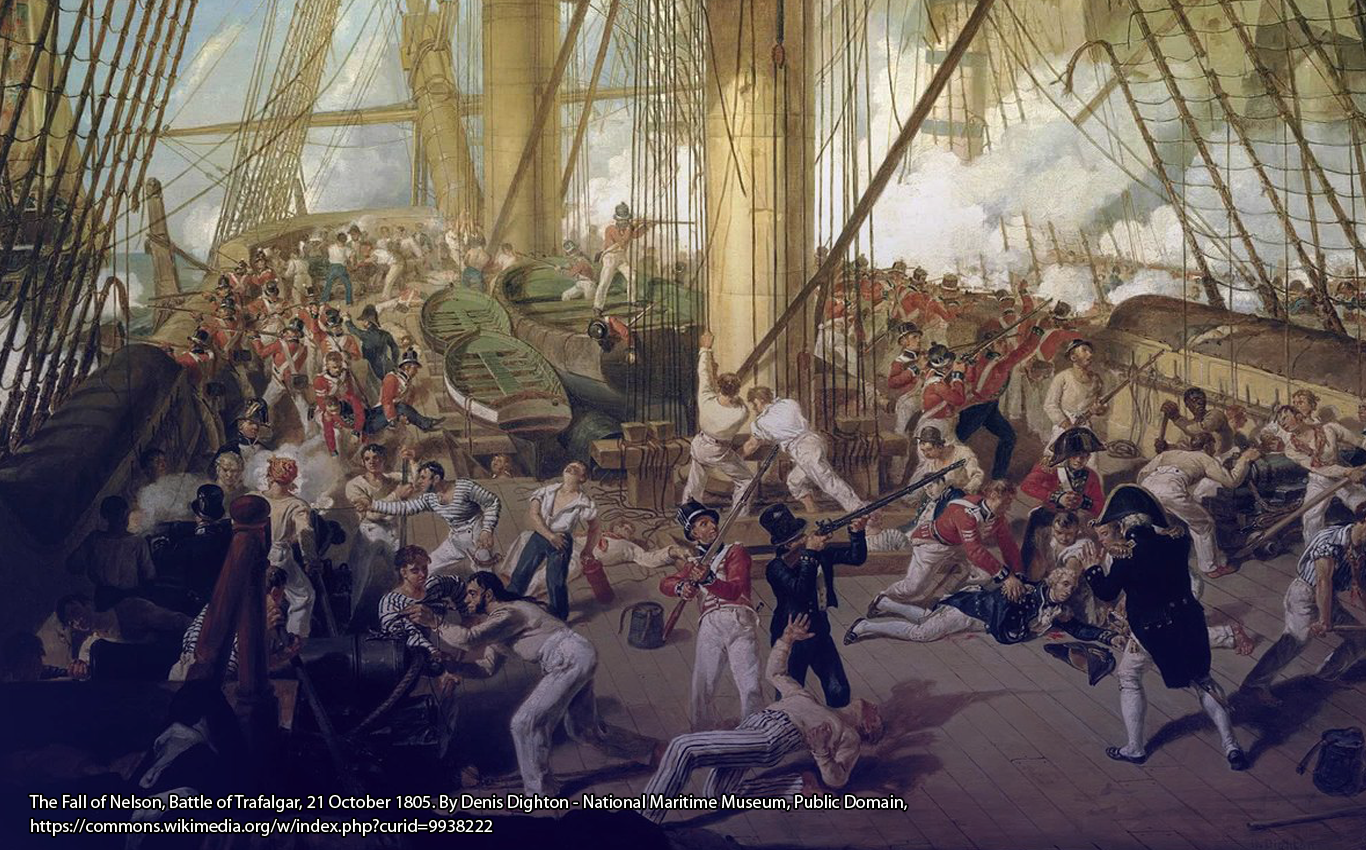 The recipe for most people’s ideal drink does not include the human corpse. Yet for some, drinking from a barrel containing a deceased hero was not a step too far. In this article, we will investigate some of the details surrounding the history of the phrase ‘tapping the admiral’ and the grim origin from which it stems.

The Battle of Trafalgar

The phrase ‘tapping the admiral’ originates from a piece of folklore surrounding the death of Horatio Nelson at the Battle of Trafalgar in October of 1805. The infamous battle, which took place during the Napoleonic War in the early 19th century, is a piece of history kept in the minds of the public today by numerous monuments commemorating the heroic and brutal scenes. The Spanish and French naval fleets had combined their forces, clashing with the British Navy at sea, and ultimately leading to the death of Vice Admiral Horatio Nelson and defeat for Napoleon Bonaparte. Having been mortally wounded by a musket ball to his spine, Nelson died, just as victory appeared on the horizon — leaving the difficult question of how to transport his body back to his home country as per his request.

As was customary with the corpse of many English sailors at the time who were to be transported overseas to their homeland, the body was put into a casket and filled with alcohol by the ship’s surgeon, William Beatty. It is widely accepted that the drink of choice was brandy mixed with camphor and myrrh, though some dispute this believing it to be rum. His ship, The Victory, was towed to Gibraltar before making its way back to England. While the use of alcohol was successful in preserving the body, it did not stop the decomposition process completely. One little known anecdote relating to Nelson’s journey home was that the gasses produced by his rotting body had built up in the barrel he was kept in.  Two weeks into the journey, the cask burst open, scaring the life out of the watchman on duty who believed Nelson had returned from his eternal slumber and was attempting to get out.

An article published in April of 1933 in the Sunderland Echo, a newspaper based in the North East of England, tells of horrific consequences suffered by one sailor who partook in tapping the admiral.  The article, which commemorates the sailor who passed away in 1852, tells how he was on board the ship with Nelson’s body on his return voyage home. Whilst attempting to spill the cask and drink the liquor, it tilted, crushing three of his knuckles and leaving them permanently dislocated. While some argue that ‘tapping the admiral’ originates from a toast in Nelson’s honour, this sailor’s tall tale offers another origin.

The story of the corpse in the cask has been told in many different settings and time periods around the world. One such story, which is alleged to have taken place shortly after the death of Nelson, is connected to another British Military figure named General Edward Pakenham who perished at the Battle of New Orleans in 1815. Legend has it, when transporting his body to Ireland in a casket of rum, he was accidentally diverted to South Carolina and delivered to a party — a mistake said to have not been realised till he was served.

American folklorist Jan Harold Brunvand documents an interesting version of the story in his book The Choking Doberman (2003,117), which he received from a professor of psychology at the University of South Dakota:

“Cheap bulk wine is imported from Algeria in ships, either arriving in Marseilles or by barge direct to Paris. The story is always involves the slow draining of the tank into a bottling line, the departure of the bottles, and then the discovery at the bottom of the tank, too late to recall the bottles, of a dead Algerian. In one version the Algerian has a knife in his back; in another he has been strangled or hanged and still has the rope around his neck”.

The phrase ‘sucking the monkey’ is often considered an alternative for ‘tapping the admiral’ and also has its roots in some grim history. When shipping monkeys from Africa to museums in the USA and Great Britain, also during the 19th century, the same process was used to pickle the body for transportation.  Folklorist William Neville Scott records a version of this story in his book Pelicans Chihuahuas and Other Urban Legends (1996,48) set once again in France:

“During the winter of 1861, the conductor of a train received for transport a huge parcel addressed to a professor of the College of France. It had been sent from Java. On the way to Paris, the train was held up on a siding waiting for an express to pass, and during the wait, the conductor and his assistant noticed the parcel was leaking. As the story puts it, it trickled “… un liquide ambre, de gout tres fine at tres particulier.” Naturally, he called in his mates, including the driver and fireman, and they boozed on until the express had passed. Wiping their moustaches, they hurriedly went on to their destination to be greeted by the professor who informed them that the parcel held the body of a “great ape of Borneo.”

While the corpse in the casket is a piece of folklore that is seldom told in the modern age, humanity’s desire to drink from the grave is not so unusual. In 2018, following the discovery of a black sarcophagus in Egypt, a petition was created in the hopes to allow someone to drink the red liquid found inside. Maybe the world isn’t quite done ‘tapping the admiral’ just yet.