A traditional festival is held annually in South Eastern Poland where locals re-enact what may be an historical event, yet is certainly a local legend. Legend tells then when Polish soldiers returned to their village on Good Friday in the 17th century, wanting to go straight to the church but being without uniforms, they donned the outfits of the Turkish army instead, and made their way to the church. Amudena Rutkowska, Curator of Folk Art Collections at the State Ethnographic Museum in Warsaw, tells of the festivities …

A few dozen men gather each year in the villages of Poland, calling themselves a ‘Turkish army’. Dressed in costumes with a hint of the oriental, some are marching with weapons, while others jump as they go. Who are they and what do they have to do with Easter?

I had the chance to have a closer look at this strange custom a year ago in the village of Radomyśl nad Sanem in South  Eastern Poland. I was invited to see the ceremony of handing out 19th century  weapons, serving as side arm to the ‘soldiers’ preparing themselves for the celebration.  It was clear there was a strict division of roles and duties inside the group that consisted mostly of teenage boys and men in their twenties, and also how seriously they took the whole matter.

The Guardians of Holy Sepulchre (because that’s who this ‘Turkish army’ are) is a custom quite popular all over Poland during the period of Holy Week.  Brought  here  by the Order of the Holy Sepulchre in the 12th century, the custom was popularized through the Mysteries of Christ’s Passion and the growing number of Calvarias in the Baroque period. In all those cases the replicas of the Holy Sepulchre were created either as a permanent architectural feature or a temporary installation inside a church. The replicas were guarded as a reference to Roman Soldiers keeping an eye on Christ’s grave. This doesn’t explain why some of the watchers started to call themselves a ‘Turkish army’.

Some written sources state that a few groups already went by the name in the 17th century. One theory is that the name and the costume could have their origins in the dress of the Turkish police in Jerusalem, observed by Polish pilgrims. Another suggests that it came from the wars between Poland and the Ottoman Empire and the interest in oriental fashion among the Polish aristocracy. There is also one more, the most tricky I think, which says that to be close to the biblical  tradition the guardians should be non–Christians, ‘pagans’: In 17th century Poland,  the Turkish people were a typical symbol of paganism. Locally, the custom is explained another way (yes, there are still some variations left) by combining historical events with a legend.

The custom dominates in South–Eastern Poland, in the Podkarpacie region. Nowadays the majority of the guards are played by local groups of firemen in their honorary uniforms, but you may also see them in the older outfits of the bourgeoisie, or folk costumes. Many times their appearance is a mixture of contemporary military uniform with something from another reality, like a big bucket of fake flowers on a cap, paper ribbons, children’s toys. 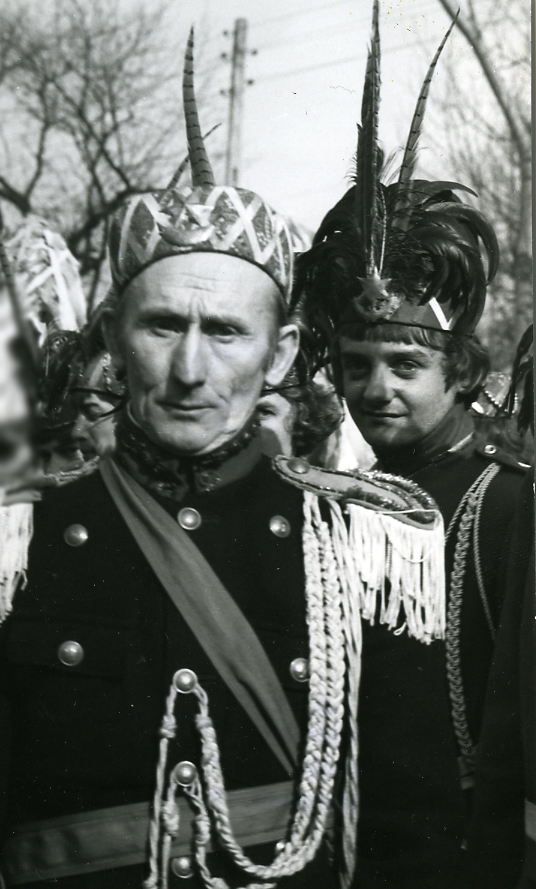 The ‘Turkish Army’ in Radomysl-nad-Sanem, 1978, picture by Krzysztof Chojnacki.

This year I went again to Radomyśl nad Sanem to observe the activity of the ‘Turkish army’ step by step. I have to admit that it was a big challenge for me, because it takes four days for the whole ceremony with not much stopping in between.  Being always where they were required a great deal physically from someone wanting to observe it all.

The names of each character within the group are taken from Polish military language; some come from the Ottoman Empire, while the origin of others is unknown. The most important is Basza (always bearded) who is assisted by six aide de camp called ‘Koguty’ (‘the Roosters’). There is Dorda – a quartermaster collecting money donations for the army in his bag, along with a Scout, Private Soldiers and the Doctors.

Everything begins on Good Friday. The army enters the church and mounts guard by the grave. This action reproduces the story transmitted from generation to generation in the town, the story that is a founding myth of the Turkish army, which states that it was Good Friday when the men of Radomyśl came back home after winning the battle of Vienna in 1683. Not having their own uniforms any more, they put on the Turkish ones, and, not finding anybody at home,  they went to the church where the Good Friday ceremony was taking place. These men went straight away to the replica of Christ’s grave, proving by their actions that this was to be their place from now on.

Nowadays the army is on duty in the church until the day after: Holy Saturday. In the evening they assist in the liturgy of the light, surrounding the bonfire outside the church. When the service is almost at an end, the orchestra  starts playing a very loud piece called ‘Gloria’. From that point, Lent is over: they march out, and some start dancing on the street. The ones who dance are the Doctors  – the most peculiar members of the army. You don’t see much of their uniform under the waving  pieces of colored paper;  high caps with a red cross mark their identity. It is the Doctors that also add an element of fun to the whole ceremony. They do not walk, they jump. They are loud, make fun of people and invite girls and children to do a jumping dance with them.

The parade ends at the square accompanied by fireworks, and just two hours later (that is around 10 p.m.) the next act of Easter theatre begins. If you watch, you can see a couple of men trying to raise a pole for the Polish flag by the light of a bonfire. Why now? Why in the night? It turns out that another old practice is repeated here. As people say,  it comes from the times of the partition of Poland when the town became a part of the Austro–Hungarian Empire and it was forbidden to hang out the Polish flag.  The people of Radomyśl did it in the middle of the night, setting a bonfire where they burned portraits of the three unloved emperors. Today (or rather tonight) nobody burns anything there, but the tradition of repeating the event is very strong: to the extent that even when local authorities founded a scaffold for the pole, nobody wanted to use the officially sanctioned alternative, continuing each year to dig a man-sized hole so that a wooden pole a dozen meters high can stand instead. Around midnight everything is ready and the representatives of the first Turkish army mount guard by the flag.

It is then time for everyone to take a nap: at 2am an orchestra starts to play  rousing music (the same melody all the time) and marches on every street in Radomyśl.  At the end all the musicians and some of the hardier inhabitants arrive at the cemetery to play for those who couldn’t attend the ceremony by themselves. This was my first Easter spent in such a way: listening to the loud marches and the noise of firecrackers at 3.30am in the middle of an old cemetery. After a little dose of sleep it is then time for church again – Resurrection at 6.00 a.m.  Less people showed up for this, they say that only those who have enough strength come. I found myself asking: to what extent is this a religious ritual? Where does the ‘Turkish army’ belong? It seems to be a tradition outside the rigid categories, more social then institutional, but surely expressing local identity.

After the church service the army pays a visit to the neighboring village. They stop by every house wishing good luck with a rhymed short poem adjusted to each person. Later they do the same in their own town. I accompanied them, listening to their orations. Religious motifs are mixed with wishes referring to health, wealth and good fortune, with everything said humorously, but in such a way that doesn’t offend anyone. In that activity they become a living heritage of village masqueraders which is popular throughout Europe, preserving the practice of exchanging gifts: a wish for some food, a wish for some money and for the inhabitants the conviction that everything is going the way it should.

When the last wishes are said the time comes for the biggest attraction. The start of the parade: the moment everybody has been waiting for. It is funny, colorful and a little dangerous because the firecrackers explode a little bit too close. When I stopped hearing anything I decide to finish my observation. And I must admit that I skipped Monday, although it is a second day of Easter, important not only in the village of Radomyśl but throughout Poland.

But from what I’ve heard, on Monday…..  everything started all over again.

The trip was a part of the research project The Mask in the Culture of Contemporary Europe – Ritual, Carnival, Theatre, Entertainment, Art financed by the National Science Centre.

Amudena Rutkowska is an ethnographer and cultural anthropologist, and is curator of the folk art collection at the State Ethnographic Museum in Warsaw. She is interested in the folklore of Central and Eastern Europe. She is currently researching contemporary carnivals, masquerades and rituals but also the history of printed pamphlets and chapbooks and the role of book sellers in 19th century Polish village. Amudena is a Ph.D. student at the Institute of Polish Culture, University of Warsaw. The State Ethnographic Museum in Warsaw (Poland) was established in 1888. The collection is made up of objects, folk art, costumes, crafts, sculptures, paintings and other art from Poland, Europe, Africa, Australia, Oceania and Latin and South America. Visit the museum website at here and on Twitter at @ethnomuseumwars.