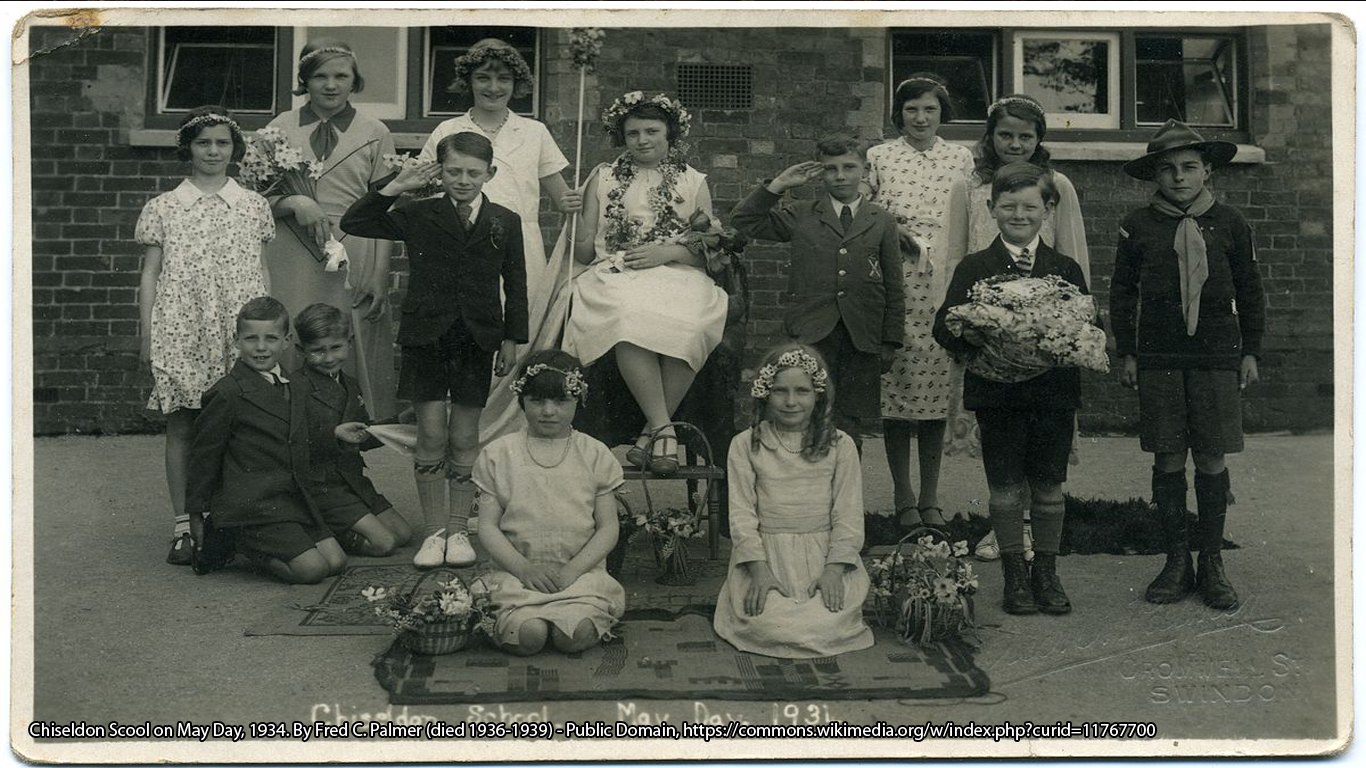 When the first of May dawns in Britain, we immediately think of May Day: maypoles being erected at fetes throughout the towns and tiny hamlets scattered throughout the countryside; May queens being crowned, and Jack-in-the-Green cavorting through the streets of villages, trussed up in leaves and garlands. May Day is a traditional spring celebration in many cultures, linked with Gaelic Beltane, and is now also the date of Labour Day or International Workers’ Day.

For #MayDay this is from Lives of Famous London Beggars (1897) captioned:
‘These men hire old dresses, and join the Cinder-sifter’s or Bunter’s Garland, or Jack in the Green, etc., and exhibit all sorts of grimace and ribaldry, to extort money from their numerous admirers.’ pic.twitter.com/cdbVMhzRyu

May Day Throughout Britain

‘Many villages across Britain still celebrate the ancient spring festival of May Day with Morris dancing, fairs, and a maypole festooned with coloured ribbons that are entwined as children holding them dance around it. Even today, Jack-in-the-Green  still makes an appearance, while a May Queen is crowned in some places, for instance at Ickwell Green in Bedfordshire. The ’Obby ’Oss (hobby horse) still plays a central role on May Eve at Padstow in Cornwall. The original tradition involved a man dressing in a horse’s skin: a trickster figure, he would cause mischief as crowds followed him through the streets – like throwing dirty water into the mouths of the onlookers, much to their amusement – according to C.S. Gilbert who watched the pageant in around 1820. In 1919, a second horse was introduced, known as the Blue Ribbon ’Obby ’Oss, Temperance ’Oss, Peace ’Oss, or merely the Blue ’Oss. The supporters of this ’oss tried to combat the riotous behaviour that often ensued at the festival, yet to no avail. Even today, local people still don the colours of the ’oss they support for the day. In Wales, the May festival is called Calan Mai, and spirits are thought to roam on the evening before, another traditional time when visions of the future are sought. May Day festivities have long been linked to Beltane celebrations (the name for the Gaelic May Day). In the past, it was traditional to light huge bonfires, and leap through the flames for luck and also to drive cattle through them – supposedly as a protection against disease and to make them fruitful. This practice fell out of favour by the nineteenth century in Devon and Cornwall, but was recorded as late as 1810 in Perthshire, where local stories also relate how boys from the surrounding villages would meet on the moors and bake a huge oatcake. This would be broken into bits, and one piece covered in charcoal to make it black. Each boy would be blindfolded, and then choose a piece from a bonnet. Whoever picked the blackened piece would be ‘sacrificed to Baal’ (symbolic rather than literal!) and would have to jump through the flames three times’… ‘On a mountainside near Brecon, in Powys, it is only on May Day that a doorway opens to the garden of the fairies’[vii].

Calan Mai or Calan Haf is the May Day celebration in Wales. Starting the evening before on May Eve, with the lighting of bonfires. The night before is also known as an Ysbrydnos or “spirit night” when spirits are abroad and divination is possible. @FolkloreThurs pic.twitter.com/QaLIRZXcop

‘Often associated with the Green Man today, the traditional figure of Jack-in-the-Green was a popular figure at May Day celebrations from early on in England. It’s said that he originated with people making huge garlands for the parades in the sixteenth century, which became so elaborate that they eventually enveloped an entire person. Others believe that he was a moneymaking invention of chimney sweeps in the late eighteenth century. He can still be seen in parades today, where he is dressed in a conical frame covered in leaves and vegetation, almost resembling a walking Christmas tree. The Garland King is a similar figure, who appears covered in flowers on Castleton Garland Day on 29 May, to coincide with Oak Apple Day in the Peak District, Derbyshire’[viii].

Festivals celebrating traditional May Day on the May Day bank holiday weekend often include a maypole, Morris dancing, music and entertainment. A May Queen and Garland King are crowned at Ickwell Green, Bedfordshire. Jack-in-the-Green appears in Whitstable in Kent; Hastings in East Sussex; in Greenwich, Berdmondsey and Deptford in London; Oxford; Bristol; and Knutsford, Cheshire. ‘Obby ‘Oss festivities can be seen at Padstow in Cornwall. The Dorset Ooser is paraded with the Wessex Morris Men near Cerne Abbas, Dorset. The Sweeps Festival has been celebrated in Rochester, Kent, on May Day by chimney sweeps in the area from the 1700s, and a festival now revives this celebration with a parade, music, and dancing. Annual cheese rolling takes place at Cooper’s Hill in Gloucester[ix]. The Clun Green Man Festival is held each year during the May bank holiday in Clun, Shropshire, where the Green Man battles the Spirit of Winter[x]. The Garland King is crowned and paraded through the streets on Castleton Garland Day, Derbyshire, followed by dancing school childrenon 28/29 May each year[xi].

Yet May is a month filled with folklore, much of it unlucky and of a malefic nature. The first three days of May are inauspicious, and seen as the time when the evil influences of fairies are at their strongest; in order to protect against this, and stop these little folk from entering your home, you should scatter primroses across the doorstep to ward off the wee folk, as they cannot pass it[i]. Gathering the first dew of May will grant protection again the evil eye[ii]. In the past, any kitten born in May used to have the reputation of being a terrible mouser, who would instead bring snakes into the house[iii], and we do wonder how many poor kittens faced misfortune because of this belief. It’s said that broom should not be brought inside throughout the whole month, and especially not used for sweeping: ‘If you sweep the house with broom in May, you’ll sweep the head of the house away[iv].’ May was traditionally an unlucky month for marriage, as it was seen as belonging to the old, and a month for remembering the dead in Ancient Rome[v]. Indeed, it’s said that on the anniversary of Anne Boleyn’s death each year — May 19th — her ghost can be seen wandering the halls of Blickling Hall in Norfolk where she was born. In a gruesome show, she makes a dramatic entrance: head in her lap, in a carriage pulled by a headless horseman, and accompanying headless horses. She’s said to roam the elegant Jacobean hallways until sunrise, when she promptly disappears…[vi]

Win a copy of  A Treasury of British Folklore: Maypoles, Mandrakes and Mistletoe

The wonderful folks over at National Trust Books have offered a copy of  A Treasury of British Folklore: Maypoles, Mandrakes and Mistletoe for a lucky #FolkloreThursday newsletter subscriber this May!

‘An entertaining and engrossing collection of British customs, superstitions and legends from past and present.
Did you know, in Cumbria it was believed a person lying on a pillow stuffed with pigeon’s feathers could not die? Or that green is an unlucky colour for wedding dresses? In Scotland it was thought you could ward off fairies by hanging your trousers from the foot of the bed, and in Gloucestershire you could cure warts by cutting notches in the bark of an ash tree.
You’ve heard about King Arthur and St George, but how about the Green Man, a vegetative deity who is seen to symbolise death and rebirth? Or Black Shuck, the giant ghostly dog who was reputed to roam East Anglia?
In this beautifully illustrated book, Dee Dee Chainey tells tales of mountains and rivers, pixies and fairy folk, and witches and alchemy. She explores how British culture has been shaped by the tales passed between generations, and by the land that we live on.
As well as looking at the history of this subject, this book lists the places you can go to see folklore alive and well today. The Whittlesea Straw Bear Festival in Cambridgeshire or the Abbots Bromley Horn Dance in Staffordshire for example, or wassailing cider orchards in Somerset.’

Sign up for the #FolkloreThursday newsletter to enter (valid May 2018; UK & ROI only).