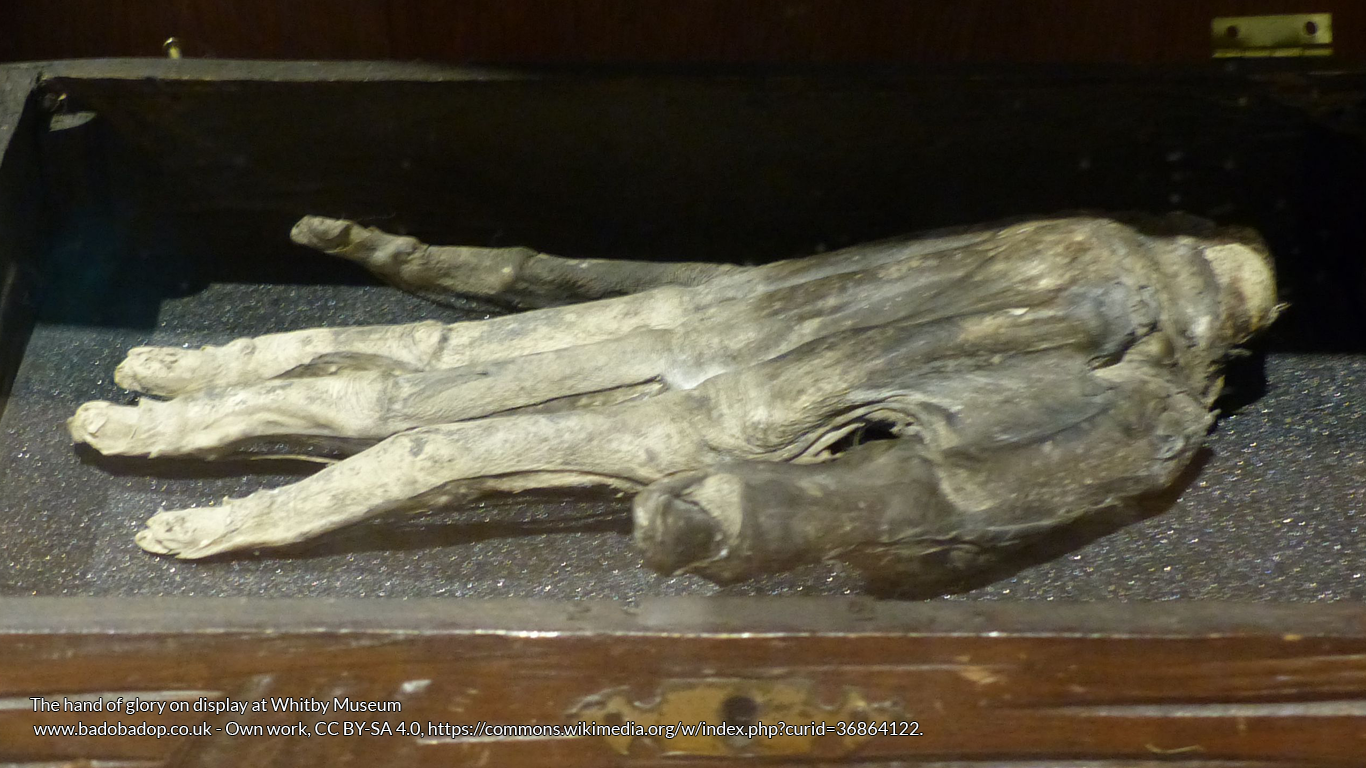 Dark Folklore: The Hand of Glory in Folk Magic

WARNING: Some readers might find certain pieces of folklore included below disturbing.

We’ve all heard of the infamous hand of glory, the hand of a dead man, hanged for his crimes, and it’s often said that it could be used to open any lock. However, on further investigation the use of a hand of glory is much more complicated!

We do hear tell of hands of glory opening locks, and one of the oldest references is from Savine Baring-Gould’s 1873 book [1]: 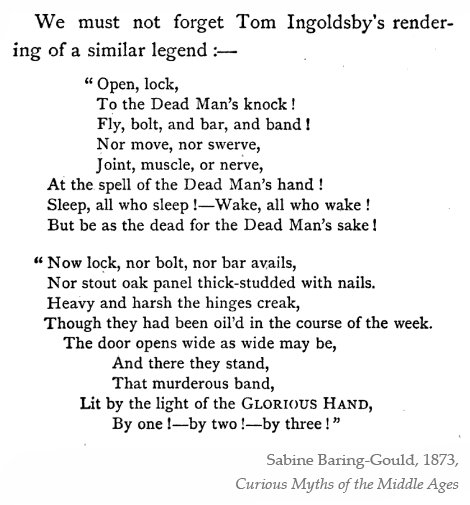 Yet many other legends tell of a very different and much more sinister use. A French grimoire from 1782 [2] gives three stipulations for the hand. Firstly, the aim of using the hand was to ‘stupefy and render immobile those to whom it is presented’ (my translation). Secondly, it must assuredly be the hand of a hanged man. Finally, there is a particular method of preparation: It is either the right or left hand, cut off while still strung-up along the highway, then wrapped in a shroud,  ‘pressed well to stay the remaining blood’ and pickled in an earthen vessel containing zimat, saltpetre, salt & pepper for fifteen days, then dried in the sun. If you’re unfortunate to live in colder climes, it is deemed acceptable to dry the hand in the oven instead, as long as fennel and verbena are added. The hand is then used to hold a candle made from the hanged man’s own fat, which, when brandished, makes all in the vicinity remain in deepest sleep. The only protection against this grotesque charm is to make an ointment of the gall of a black cat, along with chicken fat and the blood of an owl. The mixture should be rubbed around the door, and any other places that a thief might enter the house by. 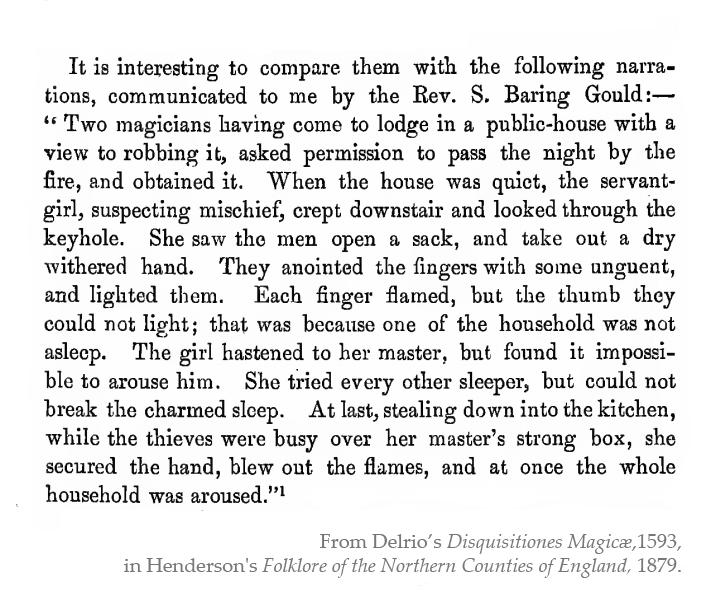 While many tales follow this use of the hand, other accounts show different ways to employ their nefarious magic.  In his 1879 book [3],  Henderson recounts a 16th century tale of two magicians who applied an ‘unguent’ to the fingers and then lit them, to the same ends: the public-house’s inhabitant would fall into a deep sleep. In many of the stories about hands of glory, the flames cannot be extinguished at all: not with milk, nor beer. However, in a few tales the flames can be extinguished, sometimes blown out, but more often than not, only put out with milk [4]. One such tale is that of John Fian, a man tortured as a witch in Scotland, which tells that he performed a service to the Devil after using a hand of glory to break into a church [5]. 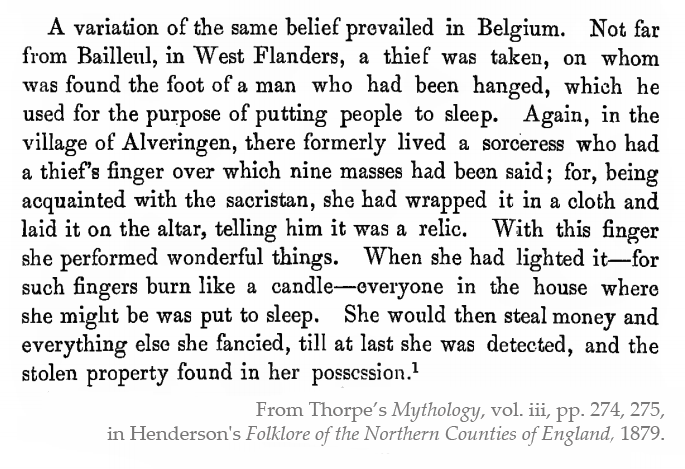 The most gruesome tale about severed hands are from stories from Germany, calling them ‘thieves lights’. In Ashliman’s wonderful resource on hands of glory [6], we find his translated versions of these original stories, one from Jacob Grimm himself. Some of the accounts are harsh to tell indeed:

And what sort of unborn little children are they? And how does one obtain the lights? When a female thief or murderer hangs or drowns herself, or is hanged or beheaded, and she is carrying a child inside her body, then you must go forth at midnight on the devil’s roads, not on God’s roads, with incantations and magic, not with prayer and blessings, and you must take an axe or a knife that has been used by an executioner, and with it you must open up the poor sinner’s belly, take out the child, cut off its fingers, and take them with you.”[7]

This must be done at midnight, without a sound, and then they will ‘never burn up’. Other stories tell that the toes of unborn children were also used, while some mention how pregnant women were often sold to thieves at high cost for just this purpose. In later editions of some of these tales, Ashliman notes, the detail that the children were ‘unborn’ is replaced with ‘unbaptised’, and one has to wonder if such folklore was just too shocking, hence deemed indecent. It certainly doesn’t pay to wonder whether this practice ever took place.

A depraved and odious practice, the use of dead men’s hands – and indeed those of children – for robbery and other crimes seems well documented from at least the 16th century. Many people are certainly unsurprised that many of confessions about the use of the vile impliment came from men under torture, and might question their accuracy in light of this. In fact, it’s a practice many would deem to come from the realms of imagination, particularly as we all wonder where we are to find evidence of these hands of glory today. You might be unsettled to find that there is now just one remaining example, still languishing, idly, in its wooden box in Whitby Museum, waiting for someone to reach out with a flame …

“It bursts locks, and shatters stones, it opens in the mountains the hidden treasures hitherto concealed from men, or it paralyzes, lulling into a magic sleep, or, again, it restores to life.”