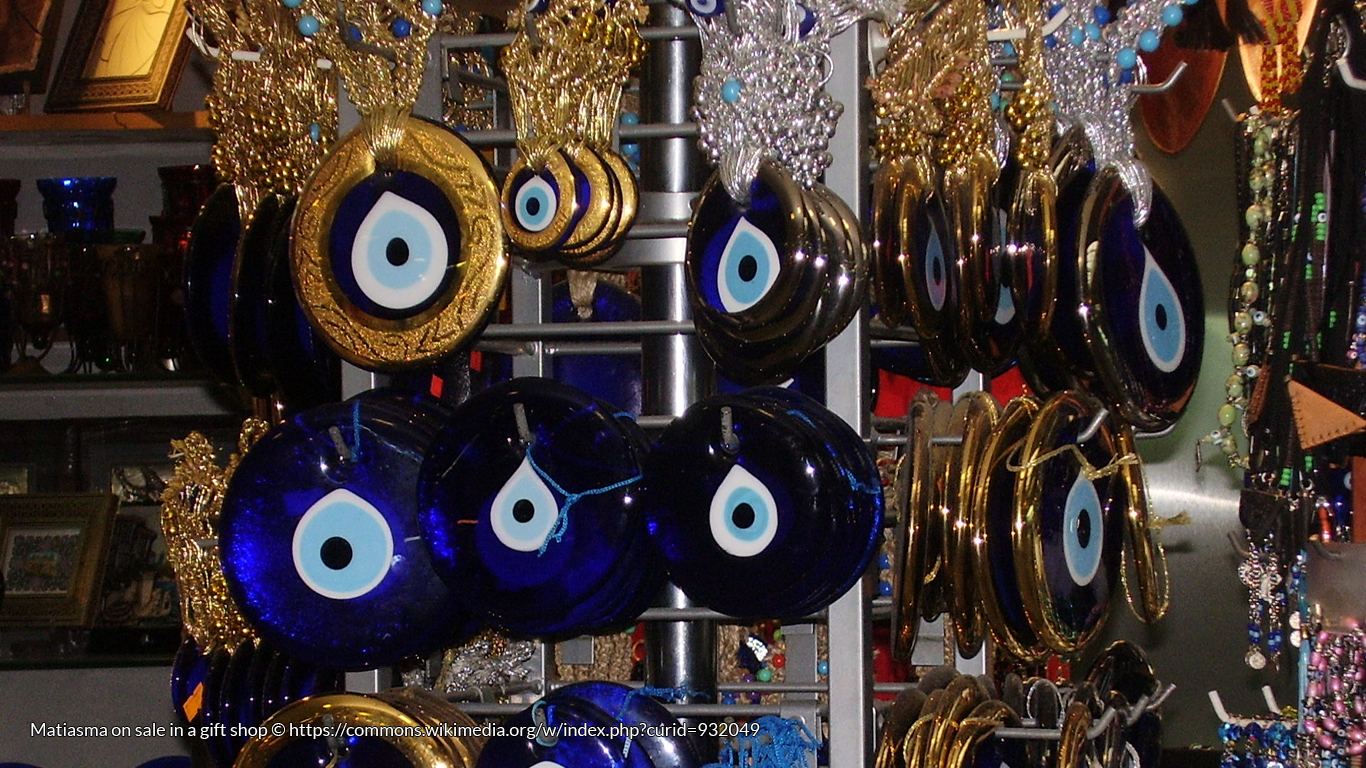 Simple souvenir shopping in Crete can lead to discovering a whole wealth of monstrous mythology. Sold today in gift shops, the matiasma is an apotropaic amulet designed to ward off the evil eye. But its roots lead far back into ancient Greek history and archaeology and are tied up in the mythology of the monstrous serpent-headed Gorgons.

While working on an archaeological project on Crete a few years back, I went into the capital Heraklion as the season approached its end to buy some suitably naff tourist paraphernalia for friends at home. After the requisite purchase of fridge magnets and tea towels, I was putting my purchases into my shoulder bag when an old lady sitting behind the counter slipped a glass token into my hand and ushered me out the shop. The token was a matiasma.

A matiasma is part of a wider world of apotropaic objects. ‘Apotropaic’ is Greek for something that ‘turns away’, and usually refers to anything that averts bad luck. This particular charm is designed to ward off the evil eye (kako mati). In Greece this kind of blue-glass eye-charm is regularly sold as protection against the real physical harm that some people are believed to exert by means of their eyes alone. The matiasma works by counteracting the threat of the evil eye – the large eye within the glass bead works to counteract and neutralise it.

The emotional source of the kako mati is usually envy, but any negative emotion has the potential to mobilise it. Those most likely to be vulnerable to kako mati are people who, temporarily or permanently, are under more scrutiny – such as young children, beautiful girls, pregnant women, and soon-to-be-married individuals. While kako mati is natural and thus anyone can inadvertently cause it, more likely to inflict it are those in ‘undesirable’ social situations, such as elderly spinsters, or people with unusual physical features, including blue eyes or a unibrow. Symptoms of kako mati are vague: inexplicable headaches, nausea, dizziness, a general feeling of malaise. Despite this, the threat is serious – left unchecked kako mati can be fatal. While it has been incorporated into the Orthodox church – who refer to it as vaskania and offer prayers for its relief – kako mati and the matiasma have a long history in Greece.

One of the earliest pieces of evidence we have for apotropaic devices in Greece dates back to the early Archaic period (c.700-c.500 BC). This is the motif of the Gorgon’s head (the gorgoneia). The story is well known – the snake-haired monster Medusa (or Gorgo, one of three Gorgon sisters) whose eyes could turn a person to stone, was defeated by Perseus who used her severed head to defeat his enemies and then offered it to Athena, who used it as a symbol of power. The Greeks took up the device, but as an apotropaic or protective symbol. In particular, the terrible power of the gorgon’s eyes is emphasised early on in Archaic art.

One of the earliest examples of this is from a Proto-Attic black-figure amphora from Eleusis, from around 650 BC, created by the Polyphemus Painter. On the body of the vase, Perseus is shown fleeing the gorgons, who glare out at the viewer. Similarly, on the Nessos amphora – another Proto-Attic black figure vase, now in the National Archaeological Museum in Athens – the Gorgons are shown speeding across the surface of the sea in pursuit of Perseus, who is not shown.

In both examples, the gorgon’s face glares out at the viewer, emphasising her penetrating stare. This frontal face view is rare in Greek art, but serves to evidence the power of her eyes. This emphasis, complete with other monstrous features such as serpentine hair, tusks, and protruding tongue, serves to highlight the power of her monstrous gaze, which ‘turns away’ those who look upon her.

The apotropaic force of the gorgoneion and the terrible power of her gaze is mentioned in Homer (Iliad 11, line 36), when discussing Agamemnon’s shield:

Crowning the shield was the grim mask of Gorgo, glaring fearfully, with Terror and Panic on either side

This literary allusion to the use of the Gorgoneion on a shield can be seen in art on the Chigi Vase, dating to c.640 BC, in which a row of hoplite soldiers is depicted. All of their shields are emblazoned with emblems of strength and power, but one in particular depicts the gorgoneion. It is thought that the hoplite soldier carrying this particular motif is the highest ranked.  This artistic evidence can be paralleled by shield decorations depicting the gorgoneion found at several sites in Archaic Greece, most notably the great sanctuary of Olympia. Dedications of arms and armour were common at temples in the Archaic period, and several depicting the gorgoneion have been found in Archaic contexts during excavation.

Some of the most spectacular images of the gorgoneion can be found on temple sculptures. The pediment from one of the earliest of the Doric temples in Greece, the temple of Artemis at Corcyra (Corfu, 590-580 BCE) is decorated with the gorgon, flanked on both sides by leopards, with her prominent eyes, protruding tongue and flat boar’s snout, staring down visitors to the sacred site. Similar depictions of the frontal face gorgon are known from other temples, such as that of Athena in Syracuse, and Temple C at Silenus, both in Greek colonies of southern Italy, where the gorgoneion seems to have been particularly popular.

The emphasis on the petrifying stare of the gorgoneia may be considered an early form of matiasma. If the evil eye could be neutralised by another, what could be more powerful than the piercing eye of the gorgon, whose stare could turn a person to stone? Given that, it is perhaps unsurprising to find them on temple pediments – her stare would protect the temple from any person who wished to profane or desecrate the deity’s dwelling place. Similarly, the gorgoneion on a shield is also understandable – protection in battle and the confounding of enemies would have been the most important element for a hoplite when choosing their shield motifs. The representation of the gorgoneion on pottery is more complex – who or what were they protecting? It could of course be a simple artistic motif, but if we look at the context of several of the vases, perhaps a different picture emerges. While the context of the Nessos amphora is unknown, we do know the Eleusis amphora served as the final resting place for the corpse of a deceased child – was the Gorgoneion designed to protect him in the afterlife? Similarly, the Chigi vase was also found in a tomb, in Etruria in Italy.

The gorgoneion motif also appears on drinking cups (in particular, on kylikes) during the last half of the 6th century BC. Generally, a gorgoneion was painted on the inside of cup, while depictions of huge pairs of eyes decorated the exterior. Here it seems that the gorgoneion in the interior is abstracted and placed on the outside using the eyes, her most prominent feature, which thus carry the full force of the gorgon’s stare. After a while, the gorgoneion no longer appears in the interior, but the apotropaic eyes remain.

These ‘eye cups’ were most prominently used in symposia, private drinking parties of the Greek male aristocracy. It may be that the apotropaic function of these cups was to protect the partygoer from the envy of his peers, keeping watch over him while he drank, or to protect him from evil spirits which could be ingested along with the wine.

The trend seen in ‘eye cups’ – a move away from depicting the gorgoneion to the depiction of a pair eyes as an apotropaic device – can be seen elsewhere in material culture. One particular area is as a motif on the brow of a ship. There are examples of this in art, such as the Siren Vase in the British Museum, which shows an episode from the Odyssey in which Odysseus lashes himself to the ship mast to prevent being lured by the Sirens.

Here we can clearly see an eye depicted on the ship’s prow. Sculpted marble eyes – or ophthalmoi – have been found in excavations of shipwrecks, such as the Tektaş Burnu classical Greek shipwreck off the coast of Turkey, as well as excavations in the harbour of Zea and the Athenian agora. Taking the artistic and archaeological evidence together, it seems that Archaic and Classical ships were regularly decorated with eyes at the bow. These eyes may have acted apotropaically, protecting the sailors from the dangers of the sea. Their frontal direct gaze is reminiscent of the frontal gaze of the gorgoneion as well as the eyes on the drinking cups. Sailing is a dangerous business, so it is no surprise to find symbols that ward off bad luck and the evil eye on ships.

Little did I know on that day when I was simply souvenir shopping that I had acquired a symbol with such a long and powerful history. The journey from a snake-haired monster to simple glass pendant – from the gorgon to the gift shop – is long and complex, but shows a universal urge to protect ourselves and ward off bad luck, even if nowadays we might outwardly scoff at such superstition. I wonder, how many other items that we use today have their roots in such monstrous antiquity?