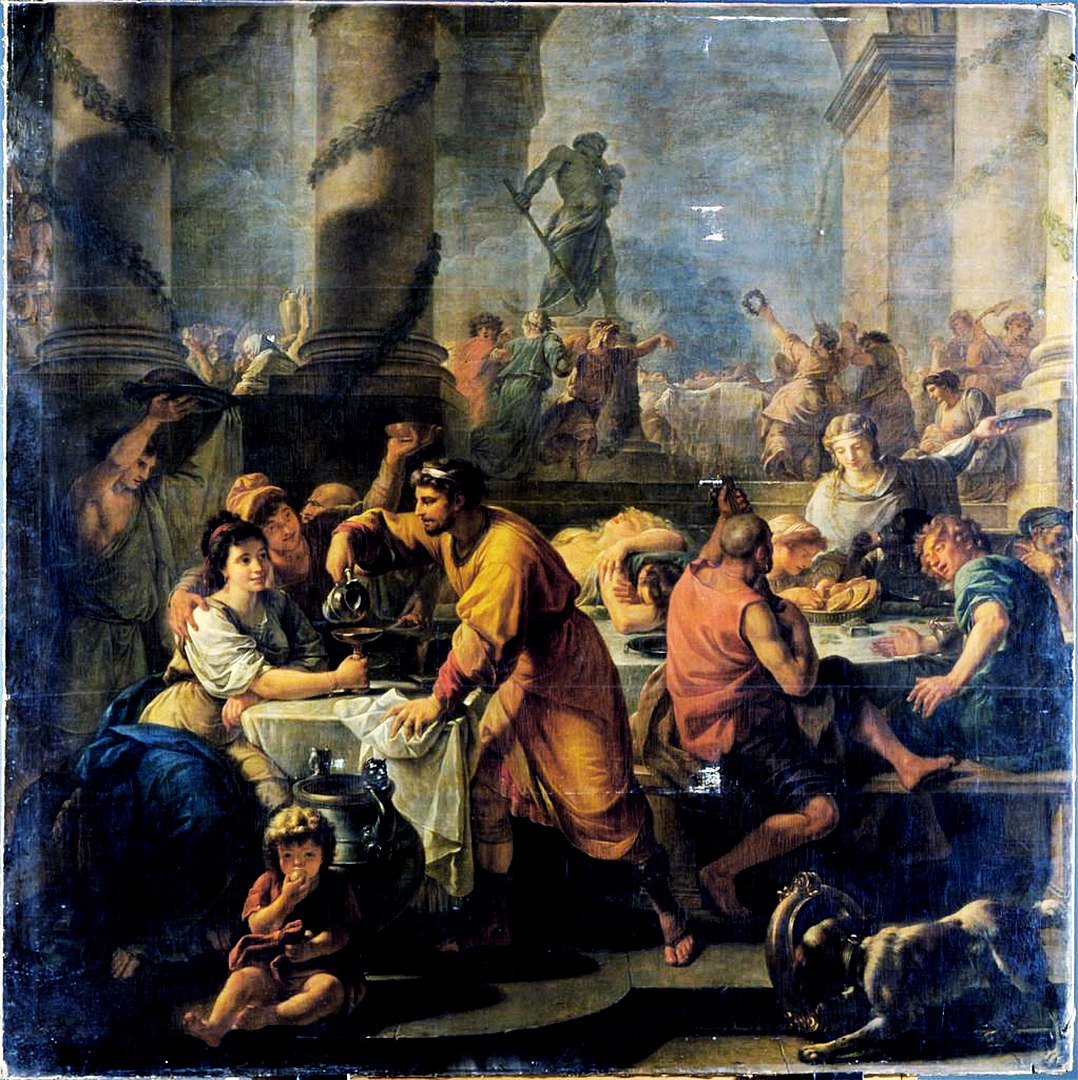 The long dark days of winter can take their toll on us; to help alleviate the darkness, we have long held celebrations and festivities to help buoy our spirits through the long nights and freezing days. From midwinter feasting at Neolithic British sites like Durrington Walls, to the Haloa of Ancient Greece and the Norse Yule celebration, humans have always needed a reminder during the depths of winter of light, community and the promise of good things to come.

Because of this long tradition, it is widely felt that our celebration of Christmas is nothing more than a rebranded pagan tradition, a midwinter celebration given a glossy Christian makeover. There are several possibilities for the ‘original’ pagan forerunner of our Christmas celebrations; one of the strongest contenders is the Roman ceremony of Saturnalia. This was a festival in honour of Saturn, the god of agriculture and harvest, which was held from the 17th of December. From a one-day celebration, it was extended to three and then finally to seven by the first century BCE, although the authorities only officially designated five days.

The festival would begin with a public meal in the temple of Saturn, during which the woollen bonds which normally bound the feet of his cult statue were loosened – a symbol of the loosening of social bonds which occurred throughout the festivities. Following the ritual cry of ‘Io Saturnalia’, several days of merry-making would begin.

And merry it was. The Roman poet Cattulus refers to the Saturnalia as ‘the best of days’, and Statius makes reference to ‘wine soaked December’ and ‘the tipsy feast’ (however, there were curmudgeonly old Scrooges in Roman times too, such as Pliny the Younger, who would retire to his room while rest of his household celebrated). Already a certain festive similarity can be seen: a poem by Lucius describes the festivities of Saturnalia which include ‘noise and games and dice’, as well as ‘singing naked, clapping of tremulous hands, an occasional ducking of corked faces in icy water’. Modern-day office Christmas parties, if nothing else, seem to owe a debt to the Saturnalia.

Like our Christmas, it was a public holiday, with schools and courthouses closing for the duration, and it was also a celebration marked by gift-giving, in particularly wax candles (known as cerei) and sigillaria (small clay figurines). The simple nature of these gifts was their point, as they would be affordable to everyone, whatever their social class. This emphasises in one of the key elements of the Saturnalia, which was not the presents, nor the drunken pranks, but the inversion of the social order. Strict public formalities were relaxed: colourful occasion wear known as the synthesis was worn rather than the toga, and both citizens and slaves could wear the pileus, a pointy felt cap normally worn by freed slaves which symbolised the liberty of the season. Colourful novelty festive wear and special hats? All very Christmas.

Most significantly, the social distinction between master and slave was dissolved, with slaves allowed off work; at mealtimes they were served by their masters, whom they could join in gambling and dice. They could even tell the truth to or criticise their masters’ conduct during this period of role reversal. All of these festivities were presided over by a mock king, or a Lord of Misrule – the Saturnalicius princeps – who was chosen from the household by lot.

The parallels between Christmas and Roman Saturnalia – give or take the odd naked singing session – are clear enough, but despite that there is no clear-cut connection between the two. Sources note that the Saturnalia did develop into a later festival, but that festival was called the Brumalia, which – according to a 6th-century Byzantine administrator – had its origins in both an obscure Roman festival known as Bruma, and the Saturnalia. The Brumalia was celebrated in the Greek-speaking eastern Mediterranean and was a 24-day celebration that began on November 24th and continued into the Christian era, despite Church councils in 692 CE and 743 CE banning the celebration. As well as excessive wine-drinking, Brumalia celebrations also included the sacrifice of goats and pigs, with followers of the wine god Dionysos inflating goat skins and jumping on them. The Brumalia continued to be celebrated until the 10th century CE, long after the Nativity of Jesus was first recorded as occurring on 25th December.

This specific date for Christmas is first seen in the calendar of Philocalus, from 354 CE. In it, the liturgical year begins on December 25, annotated with the phrase natus Christus in Betleem Iudeae (“Christ was born in Bethlehem of Judea”). This day however was already associated with Dies Natalis Solis Invicti (the birthday of the unconquered sun), a celebration of the sun god Sol, during which 30 chariots were raced in his honour, and, intriguingly, small trees and branches were decorated. The connection between these two celebrations remains unclear, although one possibility is that it was down to Constantine, the first Christian emperor, who was a keen devotee of the Unconquered Sun before his conversion.

So Saturnalia was not the only Roman festival whose celebration coincides with our Christmas festivities. In our modern celebrations, we can see elements of multiple ancient festivals – from the gift-giving and general jollity of the Saturnalia, to the decorated branches and trees of Dies Natalis Solis Invicti, and the excessive drinking (although perhaps not the bladder-jumping) of the Brumalia. Finding a sole origin for Christmas, then, is probably a pointless endeavour. What is clear however is that a midwinter celebration, a time for light and laughter, seems to be integral to people across time and space.

Daniel James Thornton. 2012. ‘Saturnus and Saturnalia’, in The Encyclopedia of Ancient History, Wiley

Richard Flower. 2016. ‘The busy Romans needed a mid-winter break too… and it lasted for 24 days’, The Conversation https://theconversation.com/the-busy-romans-needed-a-mid-winter-break-too-and-it-lasted-for-24-days-69661

Henk Versnel. 1994. ‘Saturnus and the Saturnalia’, in H. Versnel, Inconsistencies in Greek and Roman Religion, Volume 2: Transition and Reversal in Myth and Ritual. Leiden: Brill, 136–227