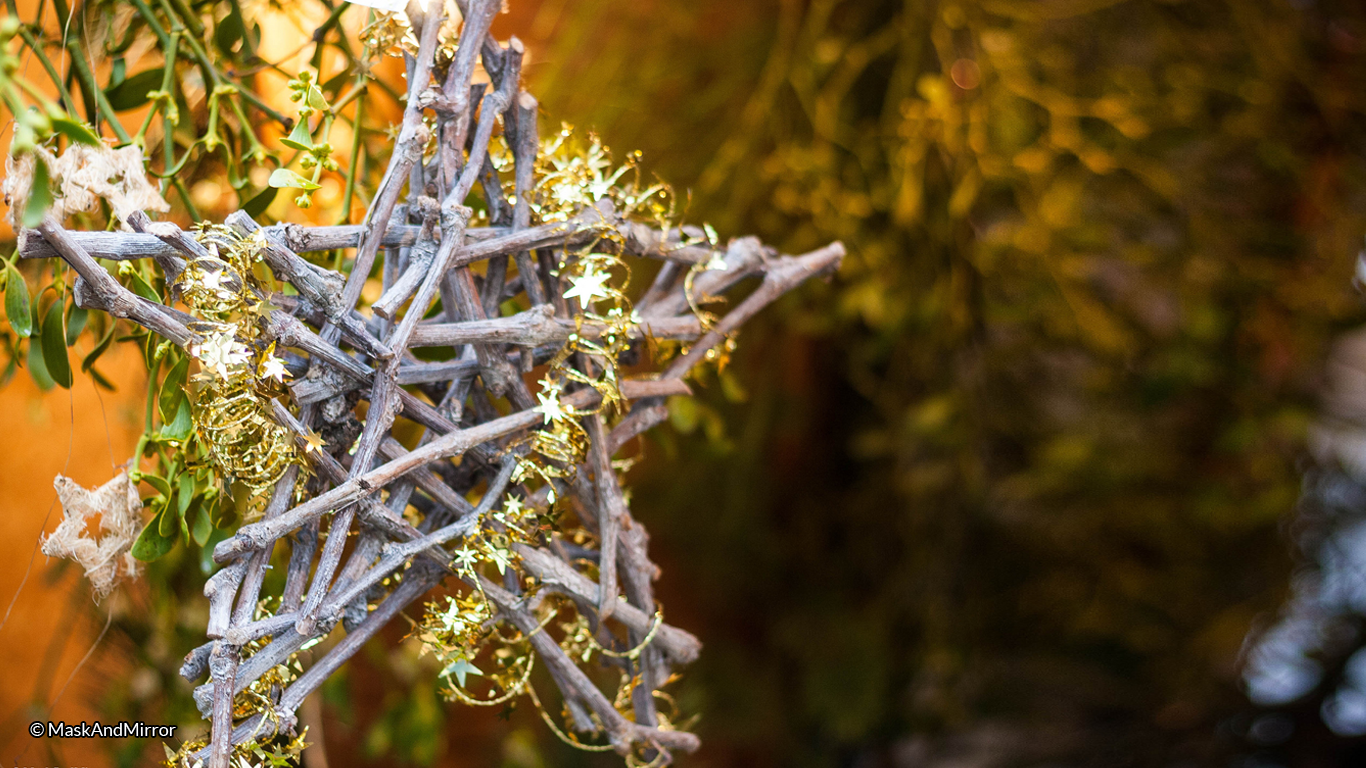 Many will declare Christmas to be nothing but “a way for card companies to make money, harrumph!” Whilst Christmas has been heavily commercialised, in recent years especially, the traditions of this time of year often have roots reaching far further than we might at first imagine.

Entire books have been written on the subject, yet most of us observe Christmas superstitions without even thinking of the meaning behind them. How often have you heard that your decorations must be taken down by Twelfth Night? Many people follow this without realising this is because goblins will come into your home and live in them if you don’t. This well-known folklore is also mildly anxiety inducing in itself, as there is some debate on whether Twelfth Night actually falls on January 5th, instead of the 6th!

So in order to avoid as much bad luck, disappointment in love, ill health and general doom as possible, I present here a collection of Christmas superstitions to help you through the festive period!

The earliest you should decorate, according to folklore, is Christmas Eve. If you cannot put off decorating until then, at the very least put down that mistletoe. Bringing mistletoe inside before New Year’s Eve invites bad luck into the house, yet many still confuse this with Christmas Eve. Interestingly, despite protecting houses from lightning, spells, and evil because of associations with the old religions, even the smallest sprig is still usually banned from entering any church – with the unusual exception of York Minster.

The custom of bringing evergreens into the home, symbolising fertility and eternal life, began long before the Christmas tree was brought to the English Court in 1800 by Queen Charlotte. Holly was especially revered as a protective plant, later becoming representative of Jesus’ crown of thorns with the red berries denoting blood drops – a cheery thought on the day that supposedly celebrates his birthday! It’s also worth remembering that if the holly brought inside is of the smooth leaved variety, the woman of the house will ‘rule to roost’ in the coming year; yet if it’s the spiky kind, then the husband would get his way.

Ceremony Upon Candlemas Eve
Down with the rosemary, and so
Down with the bays and misletoe;
Down with the holly, ivy, all
Wherewith ye dress’d the Christmas hall;
That so the superstitious find
No one least branch there left behind;
For look, how many leaves there be
Neglected there, maids, trust to me,
So many goblins you shall see.
– Robert Herrick

Folklore teaches that greenery shouldn’t just be thrown into the garden when you’re done. Remember too that you must leave the leaves up until Candlemas if you miss Twelfth Night, yet every leaf remaining after this date will bring more goblins, or even a death in the house during the year – nothing like the lingering threat of mortality to brighten up the end of your celebrations! The remaining leaves should be burnt on Candlemas Eve, unless you live in Shrewsbury where it’s considered exceedingly unlucky to burn them.

Christmas pudding should be started on ‘Stir Up Sunday’, which fell on November 20th in 2016. The chosen date is said to derive from a ‘collect’ in the 1549 Book of Common Prayer, used on the last Sunday before Advent. Although many might argue that this is for the purpose of taste, with a whole month of feeding the pudding with alcohol!

The Christmas pudding should be stirred from east to west, which represent the Wise Men travelling to see Jesus. This will bring good luck, a wish, and, for women, a husband within the year, the last not necessarily a welcome prospect for some in modern times! A coin should be hidden inside, bringing extra good fortune to the person finding it on Christmas Eve. These days we’re more likely to eat the pudding on Christmas Day, which is fine, yet remember that the pudding should not be cut before Christmas Eve, and a piece must be saved for New Years day. Traditionally a ring for marriage, and a thimble for prosperity, should also be stirred in, presumably by slightly wealthier households!

In contrast to the feasting and excess of a British Christmas Eve, a Czech friend tells me that they believe in fasting; the reward for this is seeing the ‘Golden Pig’ which brings happiness and prosperity. She also admits that her family has never quite achieved the full fast, and therefore can’t confirm if this is true!

In gift folklore, it’s important never to give shoes to your loved ones for Christmas. If you do, that particular person may walk out of your life, by dying according to most accounts. If you are related to the sort of reckless individual who buys people shoes for Christmas on no account wear them on Christmas Day, as to do so brings unprecedented bad luck upon you. Also remember never to put the shoes on a table! It’s traditional to give servants a present box on St Stephen’s Day, which is why it’s still known as Boxing Day.

As with servants, not many of us have a large open fireplace these days either. But the Yule log was once an integral part of Christmas celebrations, with probable origins in Norse bonfire celebrations during the Winter Solstice. Once cut down, the log was decorated with ribbons and dragged home. Anyone who met with the ‘dragging party’ would raise their hat at the good omen. Only those with clean hands could touch the log whilst it was being lit according to the saying:

Apparently flat footed people or those with crossed eyes were not allowed to be in the same room as the Yule log, which seems rather cruel as it would condemn those people to a solitary Christmas. The log should not be ‘stirred’ once lit, but should burn throughout the twelve days of Christmas, with the charred remains kept until next year to light the new Yule log. A small piece could also be kept in the house to prevent lightning – a common fear it seems!

Whilst the log burned away, many games were played, such as apple bobbing and snap dragon, a game where raisins were placed in a shallow bowl, covered in brandy, and lit. People, usually children, would plunge their hands into the blue flame to snatch a raisin – although it’s hard to imagine many present-day children going to such lengths for a single raisin. Another version of this is called ‘flap-dragon’, and involves a lit candle in a tin of cider, and is possibly not recommended amongst those of you with abundant facial hair.

Societal pressure to be happy and in love at Christmas is nothing new, consequently there is a glut of love divination superstitions for this time of year, strangely all aimed at women. For example, young women who go out and hit pigs with a stick at Christmas can tell the age of their husbands-to-be, presumably if they can avoid being arrested for trespassing and pig-bothering in the meantime. The first pig to squeal determines the age: old pig, old husband; young pig, young husband; no squeal, no husband.

If there’s a hen house next to the pig sty, knock on its door between 11pm and midnight. If the rooster answers, you’ll be married; if the knocking is followed by silence, you’ll not marry. Probably best to check there’s a rooster in there first, and make sure it is before midnight, as farm animals are briefly gifted with the power of speech at this time – naturally it’s fatal for a human to hear them.

On your way home, walk backwards nine times round a pear tree to be rewarded with a vision of your future lover. Once you’re home throw a shoe over your shoulder towards a door. If it lands with the toes pointing towards the door, you’ll marry within the year!

If you’re unhappy with the results of your predictions, you could always hang about under the mistletoe on New Year’s Eve. After a man has nabbed a kiss, a berry should be plucked from the ‘bough’ and given to the lady. When all the berries are gone, no more kisses can be stolen.

There is a wealth of lore that I haven’t touched on here, including, but not limited to, Father Christmas, mince pies, weather predictions, the importance of fish scales, carolling, or the appointment of the Lord of Misrule on All Hallow’s Eve – one of quite a few Christmas customs linked to the Roman’s Saturnalia festivities. Yet I’ll leave you with one last superstition to ensure the smooth running of the day: to prevent quarrelling (presumably over who gets the Turkey leg or who is cheating the most at Monopoly) on Christmas day, family members should place their shoes side by side on Christmas Eve.

Good luck and hope to see you all, unscathed by the festivities, in the New Year!

Jenny Porrett lives in Devon with her boyfriend of 8 years and a pet garden snail. She has numerous historical interests, but has a soft spot for the Georgians, historical women's medicine, all aspects of archaeology (but especially bones), strange surnames, food, and early erotic literature – for research purposes of course. She has been lucky enough to work in castles and stately homes, but currently works in university biosciences admin, whilst attempting to finally utilise her degree in history with creative writing by writing a book. She has several sadly neglected blogs, her favourite is the one where she researches the owners of unusual names that come up in her genealogical research. Other interests are cooking, photography, doing family trees for people and crossing the border into Cornwall as much as she can afford. Follow Jenny on Twitter here.