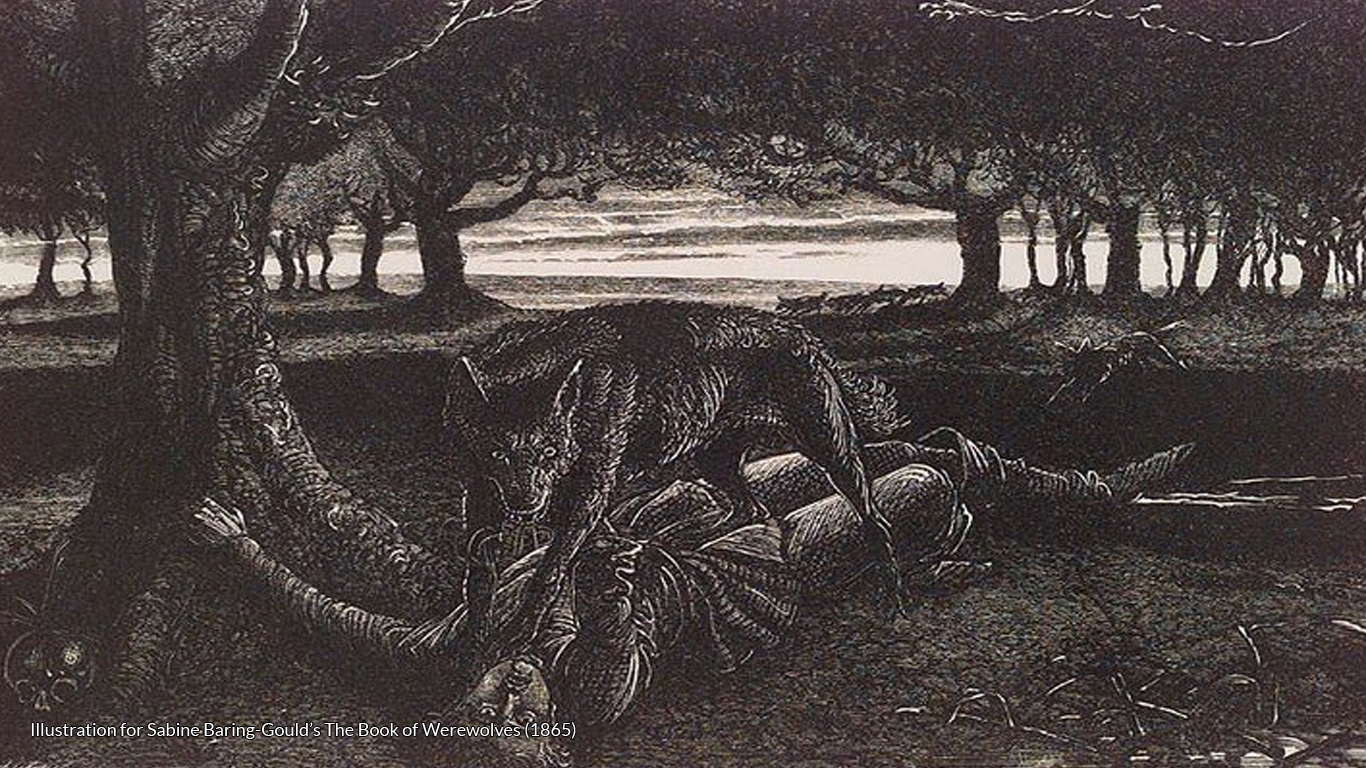 Werewolves are considered to be a traditional monster in the twenty-first-century popular culture. This is in part due to the creation of a lycanthropic tradition based on appropriated folklore. Whilst pulp fiction is often related to the burgeoning genre of science fiction, the use of Victorian folklore and pseudo-folklore regarding the lycanthrope has a clear influence on pulp fiction werewolves. Brian Frost argues that the pulp magazines of the early twentieth-century invigorated the werewolf literature by making the tales more plot-driven and absorbing them into fantasy literature (The Essential Guide to Werewolf Literature [2003], pp. 106-108). While Chantal Bourgault Du Coudray draws attention to the increased overlap between the detective narrative and werewolf stories in order to locate the abhorrent element of society (The Curse of the Werewolf [2006], pp. 42-43). Certainly the trope of the detective helps to define the werewolf for a new generation of readers, but it is the use of folklore, and sometimes ‘fauxlore’, based on academic research which authenticates the portrayal of this monster, giving it a distinguished lineage.

My first example, Algernon Blackwood’s ‘The Camp of the Dog’ (1908) features John Silence, an occultist detective, whose role in the narrative is to explain the appearance of a werewolf on a camping trip. Silence defines the werewolf as ‘nothing but the savage, and possibly sanguinary, instincts of a passionate man scouring the world in his fluidic body’ (p. 601). This description is copied almost verbatim from Elphias Levi’s Transcendental Magic (1856) which describes the werewolf as: ‘nothing else but the sidereal body of a man whose savagery and sanguinary instincts are typified by the wolf’ (p. 121). By re-appropriating an earlier text, Silence mediates the explanation of lycanthropy for the reader locating it in the past as evidence of more superstitious times.

Like Silence, Manly Wade Wellman’s Judge Pursuivant draws on historical research to explain the existence of werewolves, in ‘The Hairy Ones Shall Dance’ (1938). He cites Montague Summers’ The Werewolf (1933) and evidence from the Werewolf Trials of the sixteenth and seventeenth century in mainland Europe. The effect of this scholarly research is to authenticate the presence of the werewolf. Drawing on Charles Richet’s Thirty Years of Psychical Research (trans. 1923), Pursuivant deduces that the werewolf is a product of ectoplasmic materialisation. This explanation combines folklore and science fiction. The folkloric element of historical texts reinforces their validity and the use of science authenticates what has happened.

In comparison, Joseph McCord’s ‘The Girdle’ (1927) dispenses with science altogether stating: ‘Another means where through men have become werewolves is that they in som mannere getten a belt or girdle maked of human skin’ (p. 258). This method of becoming a werewolf is described by Sabine Baring-Gould in The Book of Werewolves ([1865], pp. 112-13). The language in McCord’s texts mimics, somewhat unsuccessfully, that of folklore steeped in the mysteries of the past. Like Silence and Pursuivant’s explanations, this suggests an ancient line of lycanthropic tradition. Pseudo-folklore is equally the cause and the means of destroying the beast in Seabury Quinn’s ‘The Blood-Flower’ (1927). The occult detective, Jules de Grandin, saves a young woman from her uncle, who is trying to transform her into a werewolf using an exotic flower, by performing an exorcism that involves a mish-mash of drawing pentagrams and intoning Latin. Grandin draws on folkloric accounts of werewolves and religious tracts on werewolves from the 1500s onwards. The idea of the ‘blood-flower’ perhaps pertains to the relationship between wolfsbane and the werewolf. Notably, de Grandin claims that the ‘old country’ or Europe is a place from which this folklore originates, especially the mention of Transylvania.

In Quinn’s ‘The Man Who Cast No Shadow’ (1927), Eastern Europe returns as the source of monsters. Here, Count Czerny, a Hungarian Count accused of being a ‘loup-garou’, who has hairy palms, and drinks blood, is killed by Grandin with a stake through the heart. Whilst Czerny has many markers of what we would consider to be a vampire his association with the werewolves is clear. Moreover both his name and the accusation that he has fought against Turks links him with another blood-drinking Count, Bram Stoker’s Dracula (1897). Stoker’s monster was itself the product of (misappropriated) folklore. The influence of Emily Gerard’s article ‘Transylvanian Superstitions’ (1885) on Stoker’s work, particularly in the vampiric elements of Dracula, has been acknowledged following the discovery of Stoker’s working notes at the Rosenbach Museum, Philadelphia. The notes also show the influence of the aforementioned Baring-Gould’s Book of Werewolves. This overlap between vampire and werewolf is re-packaged in Quinn’s ‘The Man Who Cast No Shadow’. I would consider this not only to be an homage to Stoker’s invention but, more importantly, a way of creating another layer of literary and historic precedent for Count Czerny giving him an impressive pedigree.

Equally the effect of Quinn’s adaptation of Stoker’s blueprint for the lycanthropic vampire continues Stoker’s model of adapting and appropriating folklore in order to (re)create monsters. Markman Ellis elucidates the relationship between folklore and Gothic fiction, specifically in the writing of Dracula, in a compelling manner. He explains the circular reproduction of knowledge during this period which created a veneer of authenticity which he calls ‘a cycle of credulity’ (The History of Gothic Fiction, p. 188). The pseudo-scientific approach to folklore, epitomised during the Victorian period, essentialises difference and posits the figure of the cultural ‘other’. Ellis implicates the author, in this case Stoker, in disseminating the ubiquitous monster of folklore as contemporary fiction. This reading unpacks the layers of interpretation that help to create the myth of authenticity in the presentation of this supernatural creature. To build on Ellis’ work, weird writers used accounts of European folklore to historicise their werewolves much like Stoker. The disparate nature of werewolves in the pulp magazines shows that there was not one set of tropes for the werewolf. Authors used different historical periods, places and beliefs to give their creatures authenticity.

The reason for relying on earlier folklore to create key monstrous figures is expressed by Blackwood. His story ‘Running Wolf’ (1920) features a young man, Malcom Hyde, who encounters a werewolf. Blackwood complains that Hyde had ‘neither imagination nor tradition, he called upon no store of racial visions’ (p. 61). As the product of European immigration displaced into the New World, Hyde’s roots are not indigenous and he lacks folkloric knowledge. Blackwood’s comment echoes the early American Gothic novelists concern that there was not enough history, in the form of castles and ruins, to maintain a Gothic facade. Instead, Blackwood historicises his werewolves by appropriating Native American tropes in the similar way to other pulp fiction writers’ use of European folklore and texts.

Pulp fiction authors built their representations of werewolves on the foundations of earlier folklore. In doing so they gave their lycanthropic creatures a veneer of Gothic authenticity. The success of Stoker’s lycanthropic vampire in popular culture shows the effectiveness of using folklore in combination with the Gothic to fashion a believable and enduring monster. By inserting a detective character into many pulp fiction stories, the authors placed a voice of authority in their texts that elucidated the taxonomy of each particular werewolf for their readership. Whilst the voice of authority has been replaced by Wikipedia in contemporary werewolf texts and the werewolf is much changed, the model of learning about each incarnation of the werewolf has remained similar. And with each werewolf text, the relationship between folklore and werewolves is forged anew.

Bourgault du Coudray, Chantal, The Curse of the Werewolf: Fantasy, Horror and the Beast Within (London: I. B. Taurus, 2006)

Kaja Franck is a PhD student at the University of Hertfordshire. She has just submitted her thesis, ‘The Development of the Literary Werewolf: Language, Subjectivity and Animal/ Human Boundaries’, which concentrates on the relationship between wilderness, wolves and werewolves, and how language is used to demarcate animal alterity. She is part of the ‘Open Graves, Open Minds’ project along with Sam George ( DrSamGeorge1) and Bill Hughes (@BillBloodyHughe). Find Kaja on Twitter here) or visit the Open Graves website).