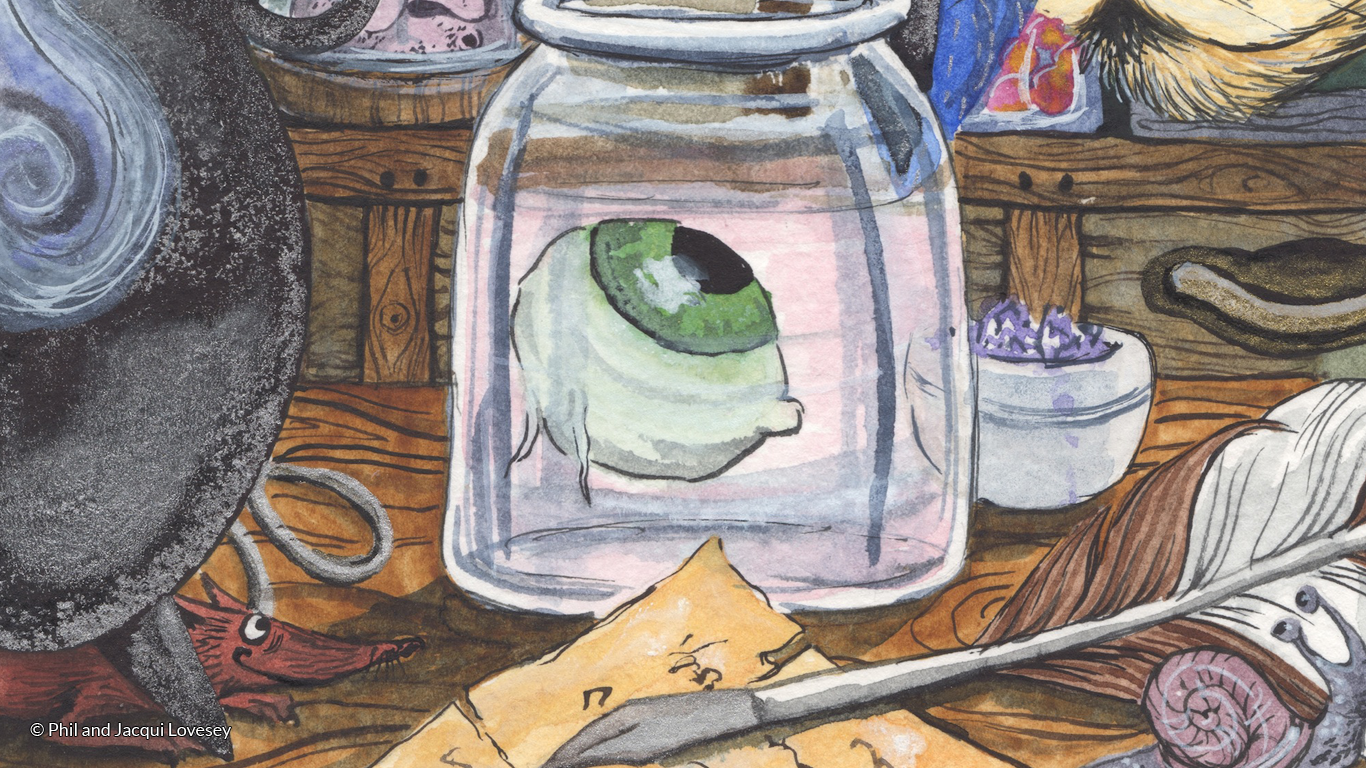 Three – some say, is the lucky number. Others find it equally as unlucky, citing dark suspicions about Shakespeare’s ‘weird-systers’ in the equally infamous ‘Scottish Play’. Love it, loathe it, dismiss it, debunk it, or even worship it, there’s no doubting that somehow this single digit has provoked both mysterious interpretation and serious academic study and numerological thought down through the ages in all its many incarnations. Not least with hares…

And what with the oft-documented case of ‘the three hares’, whereby three leaping hares are seen to be sharing just three ears to form a perfect triangle, it seemed obvious that Matlock’s ‘story’ should also be a trilogy.

Found in locations as diverse as Devon and China, the precise meaning of the  ‘three hares’ symbol eludes us, shrouded in many interpretations by academic and researchers over the years.  Some testify to its routes lying buried somewhere in the blurred lines between Pagan and early Christian theology, whereby a divine-trinity merged with existing Pagan and Wiccan beliefs such as the triple goddess of maiden, mother, crone, together with the Pagan threefold rule of return, promising whatever you put out into the world, be it positive or negative, is duly returned to you three times over. 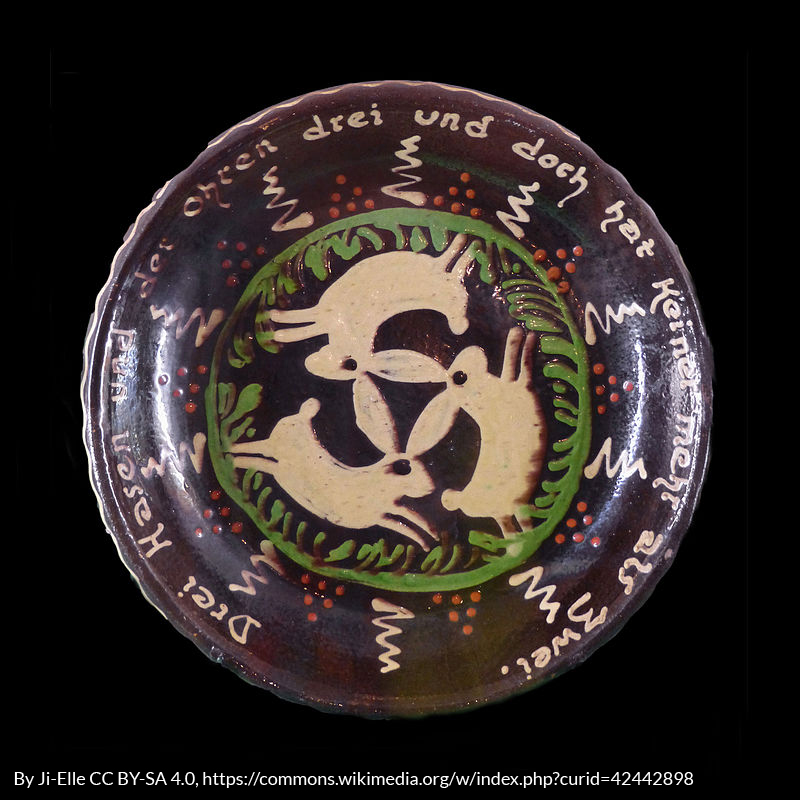 And so, to stories – and yes, the obvious ‘one’.  Stories have beginnings, middles and endings, as surely as time itself divides itself into the past, present and future. The creative-trilogy of work (whose own origins lie in plays performed at the Dionysia festivals of ancient Greece) be they books, plays, art (the triptych) or music (three part symphonies) has long held its own fascination and adherence to the humble number three, and Matlock the majickal-hare is no exception.

Whoa there, you might say – surely such mathematical adherence overwhelms any  ‘majick’ and fantasy within the trilogy?  How do emotions, feelings, ‘vrooshers’ and ‘saztaculous’ adventures emerge from behind such a rigid structure? It sounds more like a textbook than a 1,500 page crumlush adventure! 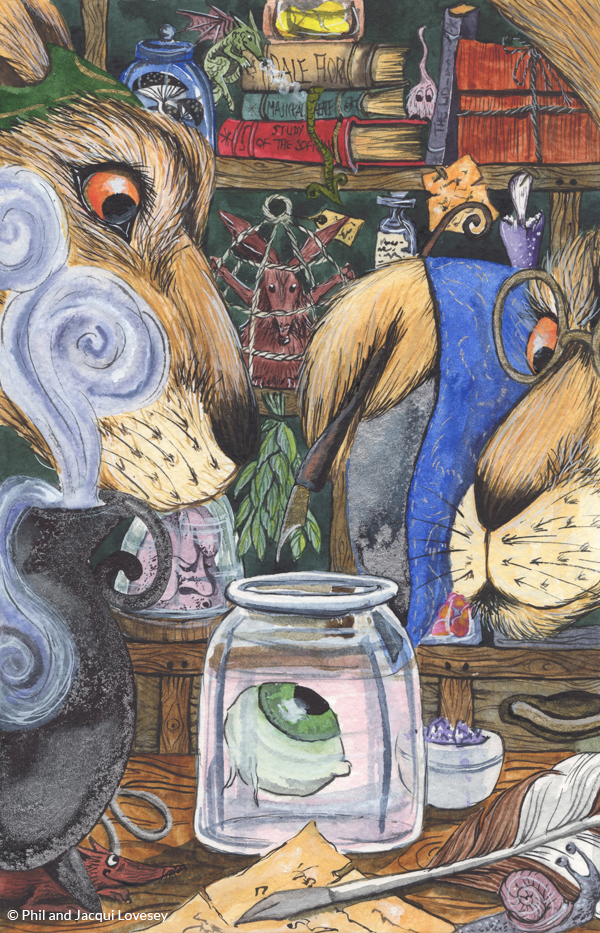 Well, as we like to say about the books (using the rule-of-three, naturally), we hope when you read them that  ‘You’ll Chickle, You’ll Eyesplash and You’ll Dudge Your Whammets!’.  Or think of the Matlock trilogy this way – if you’d locked Homer, Swift, Tolkien, Tove Jansson, Terry Pratchett and Douglas Adams in the Winchett Dale Inn with just a large barrel of guzzwort – this is the epic saga they’d have come up with!

For just as the three hare’s ears appear closely structured into an equilateral triangle, the magic is revealed as our eyes ‘see’ six.  The illusion ferments the imagination and mystery from within the structure.  What we see, we can’t necessarily believe – and what we believe we don’t always see. Whilst no one has so far identified the true ‘meaning’ of the three hares, I like to think that Matlock the Hare and all the other clottabussed, ‘majickal’ creatures and witches in Winchett Dale see this famous symbol merely as the bridge between structure and imagination, their ‘world’ and ours, an evolving folklore in itself – which is why their story couldn’t have been anything other than a trilogy.

Equally, the trilogy has to have rigid structure.  The author is bound by the numerical convention of it, the very nature of a story told in three separate parts (that each in turn have to have their own beginning, middle and end) that has to dovetail and (hopefully) provide a linked overall narrative.  Questions posed in parts one and two need to be answered in part three.  The reader requires a fulsome journey in three separate ‘sittings’.  Characters are lost or encountered along the way, sometimes without reasons that aren’t explained until the final few pages as the tale comes full-circle – just as the ‘three-hares’ leap around their shared ears in their own circle, too. (Incidentally, my tip for this, should you wish to write a trilogy, is to ‘start’ from the final scene and work backwards in your mind to the very first. Not that there’s any ‘proper’ way to plan such things – some writers simply start at line 1, page 1 and see what develops along their own narrative journey. I assume my more structured approach is from years of writing crime novels, whereby nothing can left ‘untold’ by the final page. As I say, it’s just a ‘tip’, to use or dispense with as you wish). 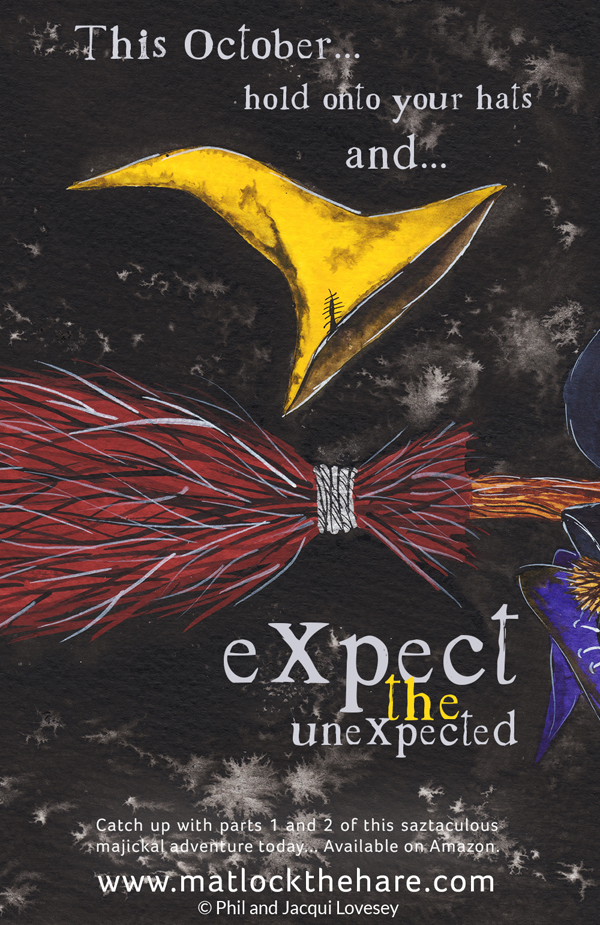 My fascination with ‘three’ is perhaps its enduring nature, how it subtly punctuates our lives in so many ways today, regardless of its original Pagan, religious or divine origins.  ‘The Trinity’ is alive and well, survived in the everyday:  A gold, silver or bronze medal; blood, sweat and tears; friends, Romans, countrymen; three little pigs; three blind mice; Harry, Hermione and Ron; the three fates … The list probably isn’t endless, but I’m fairly certain it would perfectly divide by three.

Next month will see the launch of the third and final part in our trilogy, The Trial of the Majickal Elders, the conclusion of four years work that began when we first encountered the green-robed, wand-wielding majickal-hare in his earliest watercolour incarnation.  I suppose in a ‘peffa-perfect’ world, we should have created the books in three years, but this, we like to think, is our own ‘chaos within the structure’ – just as three ears becomes six, three books become four years – and all seems most saztaculous fine and crumlush again …

Above all else, I like the ‘three hares’ for their mysterious charm and humour; playful hares, quite the most elusive and characterful animals, defying both the eye and geometry itself, as if they’re ancient mathematicians leaving us a riddle to both ponder and admire.

And of course, I see the irony within my current state, delightfully caught in my own ‘trilogy’ alongside Jacqui and Matlock as the three of us endeavour to bring that same sense of mysterious charm and humour out here into The Great Beyond.

That the time? Wonderful, then it’s time for a brottle-leaf brew, which – you guessed it – we always sit down to enjoy at three…

Sign up for the #FolkloreThursday newsletter to win one of five Matlock the Hare beer mat sets – full details will be available in the September edition, and winners will be announced in October! 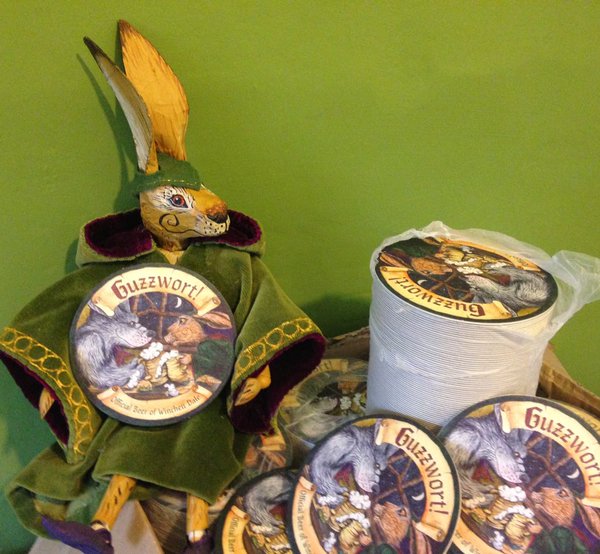 The Trial of the Majickal Elders by Phil & Jacqui Lovesey is out in October, and will be available on Amazon in paperback, hardback and full-colour kindle versions. Parts 1 & 2 – The Riddle of Trefflepugga Path and The Puzzle of the Tillian Wand are also currently  available in similar formats.

For more details of the author, illustrator, the books and the fully-realised world of Matlock the Hare and Winchett Dale please go to www.matlockthehare.com or click on the images to purchase.

More information about Matlock the Hare author and illustrator, Phil and Jacqui Lovesey, their books, handmade books, prints, and original artworks can be found at their website. The third and final book in the Most Majelicus trilogy featuring Matlock the Hare will be available in October, 2016. Email: matlockhare@yahoo.co.uk.