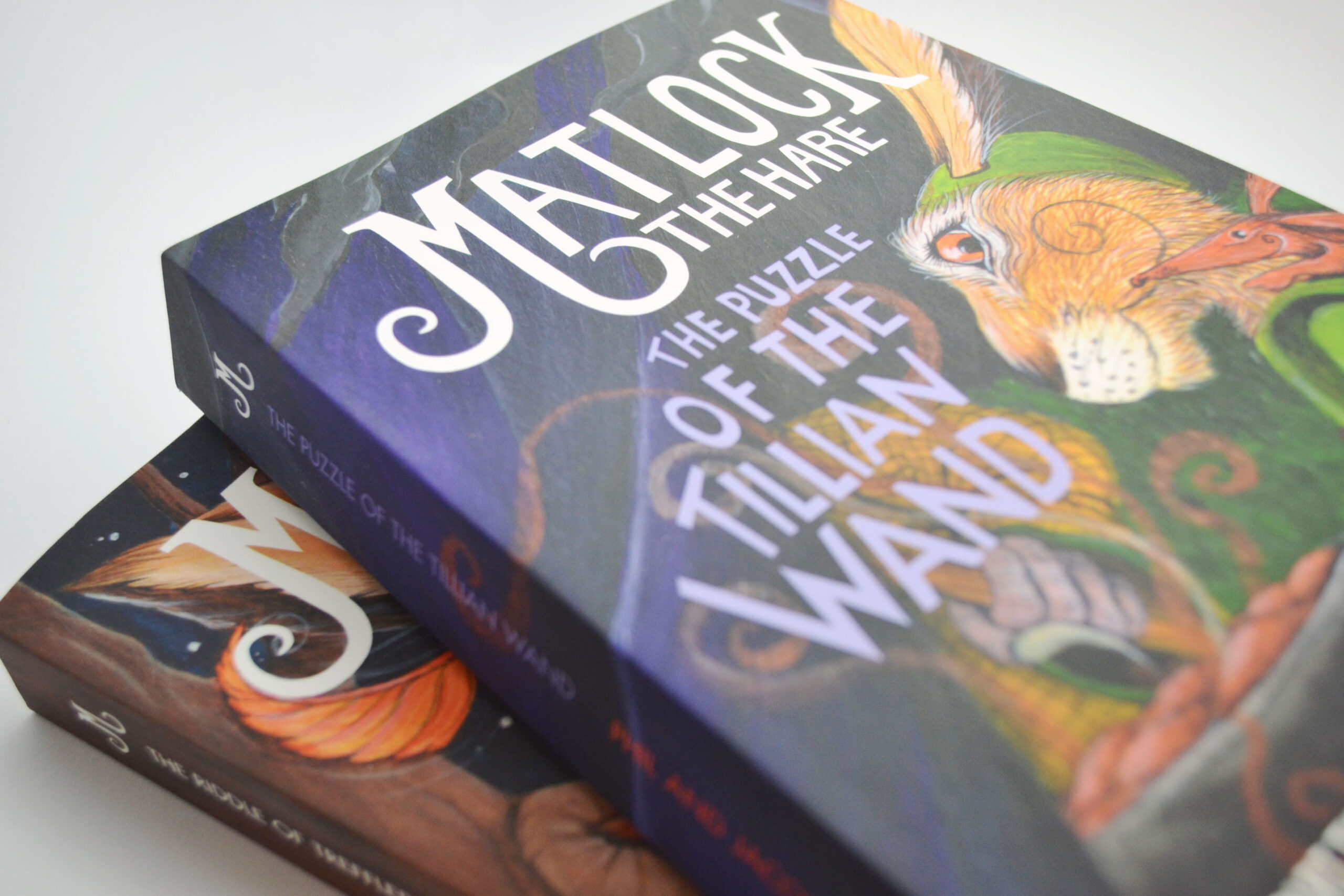 Hares and folklore … hmmm … how many words, I wonder (or ‘griffles’, even?) have been written about this one bounding, leaping, boxing wonder?  A million? Ten million?  How about a ‘grillion’, as Matlock, the Majickjal-Hare from Winchett Dale would ‘griffle’?

Firstly, let me point out that this isn’t to be a numbers exercise – some sort of word-accountancy game – simply that I’m supposing that of all animals, these long eared drove-dwellers could well have more than their proper ‘hare’s share’ of tales, myths and lore attributed to them.  And secondly if words like ‘griffles’ ‘spuddles’ ‘grillions’ ‘saztaculous’ ‘twizzly’ ‘peffa-glopped’ ‘clottabussed’ and ‘crumlush’ occasionally ‘pid-pad’ their way into this article, then I can only apologise and blame Matlock – it’s Dalespeak, the language of Winchett Dale, home to our green-robed, wand-wielding, majickal-hare.   But more of that – and him – later …

Did Jacqui and I ever set out to deliberately mine this rich pre-laid ‘seam’ of leaping-lepus’d tradition as we began ‘working’ with or own hare? Certainly, we called him Matlock after the Derbyshire town that has long since captivated us with its own intrinsic mixture of limestoned, caverned scenery and the many myths (or ‘spuddles’ as we’d call them in Winchett Dale) surrounding the entirety of the ‘saztaculous’ Peak District.  Matlock – a name that instantly suited from the very first ‘blinksnap’ it occurred, just as Jacqui had finished a small watercolour painting of him.

Interestingly, I’ve never really asked her why she chose to paint a hare that day  – so just now, I did exactly that. I expected perhaps, an answer to do with her long love-affair with painting wildlife, or that it was somehow connected with being born in the leaping month of March, or perhaps even something aligning to her passion for folklore and ceremony.  Instead, she merely looked at me from across ‘the potionary’ where she’s hard at work on another illustration for the new book, peered over the top of her glasses, raised one eyebrow in the way you might do to a wearying child, and replied, ‘Chose? Matlock chose me.’

I decided to get back to the article …

So, we had our hare-hero, a majickal place for him and his fellow creatures to live that grew from an initial series of Jacqui’s paintings, and perhaps, most importantly, a growing army of ‘Saztaculous Matlock Folk’ who have thus far supported us in our creative endeavours by buying his books, pictures prints – and even crowdfunding both the second and third parts of the trilogy that will be  published in October this year.  All of which sometimes leaves us asking ourselves – what is it about Matlock that seems to captivate so many: the ‘griffles’, the pictures, the stories, the chance to slip away into a majickal, often slightly ‘clottabussed’ world?  Perhaps. Perhaps all of these – and maybe so much more, simply because he is a hare …

I sometimes like to think that his success lies somewhere hazily within the awakening collective unconscious that recalls the distant voices of the oral tradition of folklore – lost lessons passed to us via tales from our ancestors denoting mysteries swirling within the rhythms of nature itself – the oriental ‘hare in the moon’ making its elixir of immortality; England’s own hares appearing sentient in the light of the full-moon, eyes as bright and alert as the ‘sun-turn’ they were born, all too easily associated as witches’ familiars as they melt back into the dark woods beyond …

Or is that simply my own lunacy? It gets like that, writing Matlock – you begin to question things that have no tangible answers and end up feeling like a right ‘clottabus’ – at which point he’d most likely make you a ‘brottle-leaf’ brew, and griffle to you not to waste too many precious ‘blinksnaps’ thinking about such ‘glubbstooled’ nonsense, when you could be doing something far more ‘crumlush’ instead’.  Wise griffles, I’ve always thought.

Whatever elusive thing it is and may well be, I know this much: The hare provides us with something ‘beyond the now’ – any encounter is somehow privileged, a glimpse of days gone by, the lore within its own ancestors still shining and brightly alive.  I promise you this much: If you’re lucky enough to meet a hare’s fleeting glance, you’ll see the past startlingly revealed in the brown and black depths of its eye.  Three times I’ve had that quiet pleasure; each time I’ve heard myself gasp.

Before writing about Matlock, I used to wonder if Kit Williams iconic Masquerade would have been just as successful if he’d chosen to bury a golden tortoise instead.  Or perhaps a penguin. Even a life-sized golden giraffe? But whatever the size of the treasure, I remained convinced it was the thrilling combination of the puzzling hunt and the hare itself that ensured it caught the nation’s interest and sent us rallying for spades and forks.   Perhaps we were all somehow digging for a heritage that spoke to us from beneath the ground itself  – for me the almost ‘peffa’ perfect example of the revival of the oral tradition of folklore in the midst of our technology smothered lives.

Ah, technology, the curse of our age. Or is it?  For all its apparent ‘peffa-gloppedness’, it’s also allowed the resurgence of lost tales, communities of like-minded folk ‘to ‘griffle’ of wondrous, ‘saztaculous’ tales to each other from across the globe, and the cataloguing of lost narratives and literary artefacts breathing much needed new life into the oldest of storytelling traditions.

Indeed, technology allows ut to keep in touch with Matlock fans from across the globe, and there’s nothing more satisfying than when folk talk to us in ‘Dalespeak’ or regale tales of how the ‘griffles’ of Winchett Dale have crept into their everyday language.  There we have it, you see, the oral tradition continues – ‘griffle’ by ‘griffle’, ‘sun-turn’ by ‘sun-turn’ …

On occasion, those who’ve already read The Riddle of Trefflepugga Path and The Puzzle of the Tillian Wand will say the books are densely-layered, drawing on many traditional literary elements and styles of the folklore tradition to create a magical world as Matlock sets out to complete his three Most Majelicus tasks, set against a backdrop of current and past events that might perhaps have re-shaped our own lives and beliefs if things had played out rather differently … at which point, I mostly tend to stare back a little blankly, thank them profusely for their kind compliments and try to explain that really, if anything, I’m just a bloke from Essex that was fortunate enough to marry an illustrator with all the brains – and if we ever really do get stuck, there’s always a majickal green-robed hare to tell us exactly what to do.

And he’d be most ‘crumlushly’ pleased to meet you all too … Until then, may all your ‘pid-pads’ be most ‘peffa-shindinculous’.

Parts One and Two – The Riddle of Trefflepugga Path and The Puzzle of the Tillian Wand – can be ordered via their website, or direct from Amazon.

More information about Matlock the Hare author and illustrator, Phil and Jacqui Lovesey, their books, handmade books, prints, and original artworks can be found at their website. The third and final book in the Most Majelicus trilogy featuring Matlock the Hare will be available in October, 2016. Email: matlockhare@yahoo.co.uk.