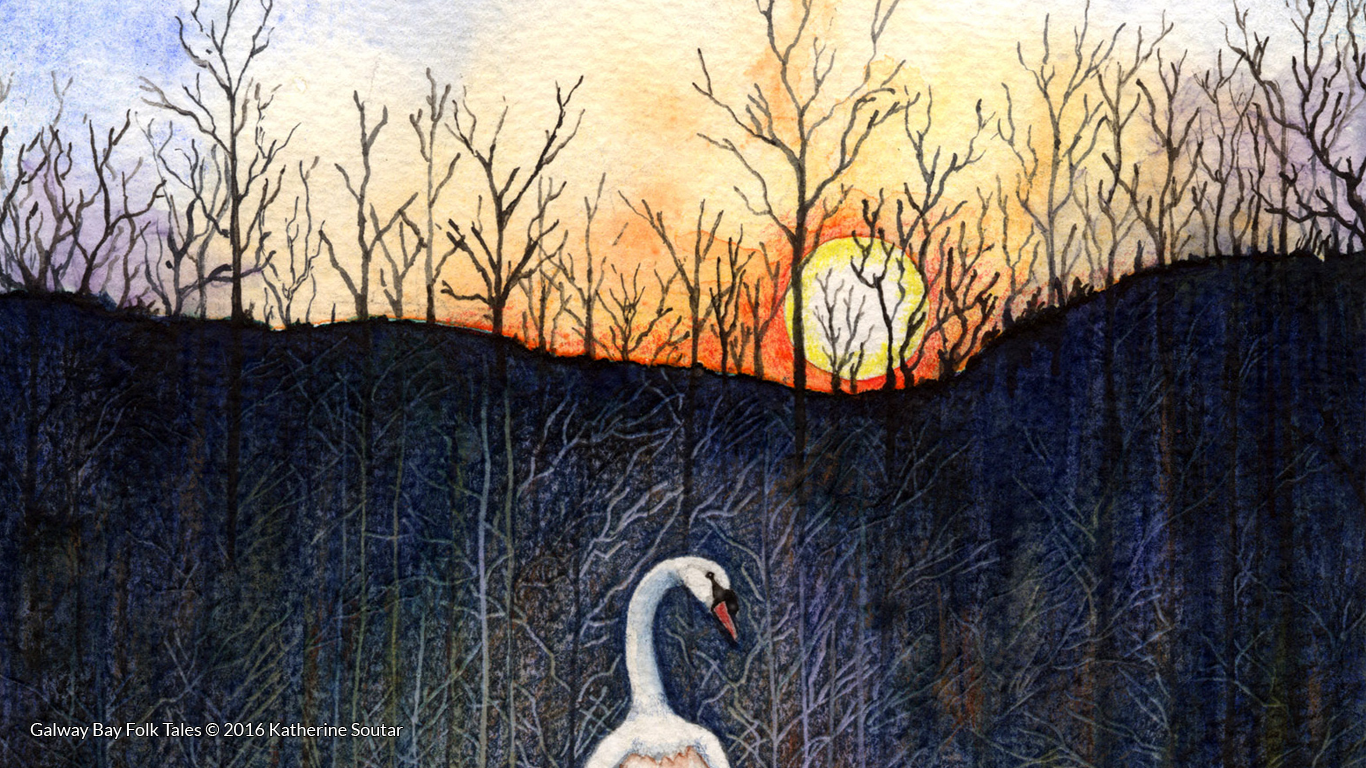 Willow Winsham talks with artist Katherine Soutar, author of a fantastic new book, Painting the Tales, detailing her experiences of illustrating the Folk Tales series by the History Press.

How long have you been illustrating, and what first drew you to that path?

I have always been drawing … it was a compulsion when I was a child, I always had some images floating about often connected with stories I had read and wanted to get them down on paper. Quite often paper that was not supposed to be for drawing on, my parents were very patient … But my Art degree was actually in 3D, Glass with ceramics (I was utterly seduced by glass when I went to visit the college and have recently started working with it again.)
Drawing became a major driver in my life once again when I became artist in residence in a psychiatric hospital and started to help other people to find ways to express themselves visually. I found myself drawing, painting and writing in the evenings after I got home as a way of exploring my feelings too. I often wove poetry and story into the work I made.
I moved to London to train as an art therapist and whilst there started to try to sell some of my Illustrations, it was difficult! I wasn’t an illustration graduate and was fairly naïve about the whole business to be honest. But eventually, after finishing my course and with a baby on the way, I decided to try to sell my work as greetings cards and tramped around the streets of London with a sample pack I had made. I got a dozen orders on the first day.
That was back in 1990 and work gradually started to drift in from people buying the cards and finding my contact details on the back. Another important milestone was probably in 2000 when I Illustrated a book called Seeds on the Wind for storyteller Tim Bowley and realised how much I loved interpreting folk tales. I was also involved with the organisation of Festival at the Edge, an international storytelling festival at the time, which connected me with the excitement of storytelling as an oral tradition and meant I met lots of storytellers … which leads on to the next question …

How did you first become involved with the History Press Folk Tales series?

When the History Press were commissioning the Folk Tales series they were discussing finding an illustrator to work on covers for the whole series to give a feeling of continuity and Mike O’Connor, a storyteller and musician who was writing their Tales of Cornwall book, happened to be on the spot. He suggested they might like to use me and showed them a CD cover design I had done for him, they liked it and contacted me straight away to do the first book in the series. I have just completed my 75th cover for them, number three in the Ghost Tales series.

Where do you draw inspiration from for your cover designs?

Well … from the stories obviously! But yes, there are other influences a plenty … I am fond of the work of artists from Marc Chagall to Arthur Rackham and my work often nods to the pre-Raphaelites as well. I also spend a lot of time researching images of the landscape where the stories are set and going for long walks in the woods outside my home, I often have my best ideas when walking … and oddly enough while sleeping too.

Which folk tale(s) have stayed with you?

This is such a difficult question as there are so many … I found myself crying reading the one I used as the cover for the Cumbria book by Taffy Thomas, and cried again when I heard him tell it live at my exhibition in Scotland last year. The Kilkenny book contains an unusual variation on the werewolf story that has stayed with me ever since. Northumberland’s cover features my son Tam as Tam lin and I have a real affection for both the cover and the ballad. South Yorkshire’s cover features a emotional and visceral tale of a battle between man and beast that leaves you with a breathless respect for them both. Every book leaves me with something that enriches me and feeds into what I do next.

Do you ever have the artist’s equivalent of writer’s block? If so, how do you overcome it?

I do indeed… and there are several things which help, walking is great, I live next to a woodland and often take myself off into the greenery when I am feeling stuck. Just leaving something overnight and looking at it with fresh eyes the next day can be enough sometimes.
A deadline looming can also be surprisingly inspirational believe it or not. But my favourite book of anonymous photographs is probably the best way to bounce myself out of it, not because I find anything there that will be part of the solution but just because it makes my mind turn over and fresh things come to the surface

Which has been your favourite cover to work on?

For sheer connection with a piece of work, the swan maiden cover of Galway Bay Tales has it, I became so attached to it while working on it that I found it hard to hand it over for scanning even … It is now framed on my wall as I couldn’t bear to sell it and wanted to always know where it was … I don’t often get so obsessed by the way!

What do you hope people will take away from your work?

Hmmm … I think it may have been Quentin Blake who said that you should tell people just enough on a book cover to make them want to look inside, I hope I do that. I also hope that people will see something new every time they look again at one of my pieces and that they are open for the creation of peoples own stories if they don’t know the one concerned. It has been interesting listening to people comment on the work at my exhibitions recently and how often they see things that even I didn’t know were there …

And finally, work-wise, what does the future hold for you?

There are still a few titles left in the Folk Tales series and I am also now working on the History Press’ Ghost Tales series too. I also now have a waiting list for privately commissioned work, which is a new thing for me! This past year I have had three exhibitions of the Folk Tales cover work, entitled Painting the Tales which have included storytelling and music performances as well as a talk on my process of working and my inspirations. This has been such an enjoyable experience and the most recent one in Sheffield also involved delivering art workshops based on stories and has led to further workshop bookings and the chance to work with people helping them find ways to express stories visually.It feels like a wonderful way to share my passion for storytelling and art and the ways they can both enrich each other and our life and culture.
My work can both represent stories and give birth to new ones in the viewer… I love that and it makes me very happy to be part of an ongoing tradition of the stories we tell ourselves to make sense of our shared experience and the world we inhabit.
I have recently started to think about some of the universal stories that appear in many different cultures across the globe and ways that I could explore the connections between us that we so often miss whilst we are focusing on our differences, I would like to produce some work that expresses this and see this as a project I could perhaps work with international storytellers on. Watch this space.
Thank you Katherine!

The Story and the Artist: Katherine Soutar's work for the History Press is a unique collaboration between illustrator, storytellers and publisher. She reads the entire manuscript of each folk tales book and crafts the perfect cover image based on its content and her own extensive research. She has supplied the cover artwork for every title in the Folktales series, now at over 70 books and still counting, she is also responsible for the covers for the newly commissioned Ghost Tales series. Katherine is a member of the Association of Illustrators and has been working in collaboration with storytellers and musicians turning their words into images for many years. She also works in an academy school part time, introducing students to warm glass techniques, animation, illustration and printing. Visit Katherine’s website here. 'Transforming words into pictures is what I love to do most.'