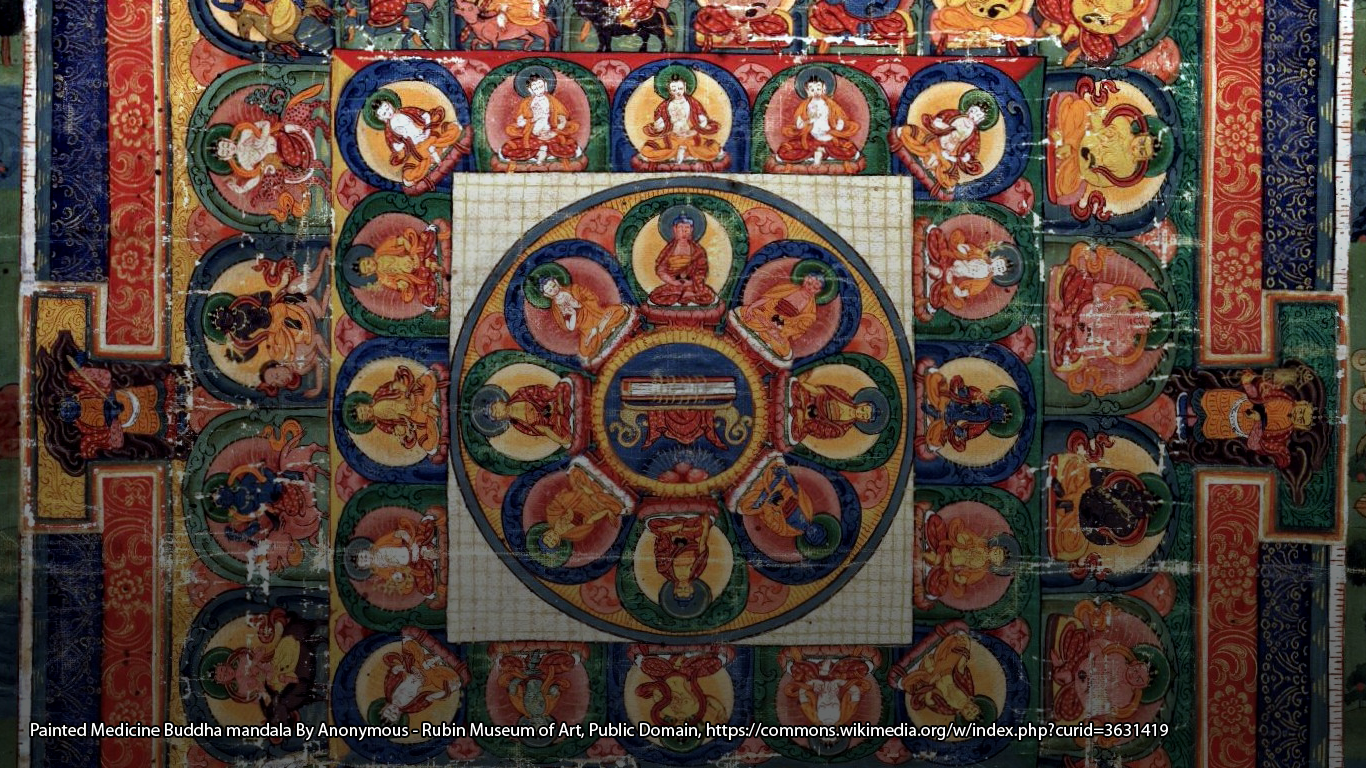 Mandala is a Sanskrit word meaning ‘circle’ or centre. The religious and spiritual links of the mandala symbol originate from Buddhism and Hinduism. It is also seen in Jainism. In Buddhism and Hinduism, the mandala is a symbol of devotion representing the transformation of the universe from a state of suffering to one of enlightenment. A mandala can be defined internally, as a guide for a number of psycho-physical practices such as meditation.

During the twentieth century, there seems to have been a sense of alienation experienced by Western individuals. Existential philosophies such as modern art, literature, and science, depicted man in search of a higher spiritual core and meaning to life. This burning desire lead the mid-to-late twentieth century individual to delve into spiritual ideas around which they could build a purposeful and meaningful life. Further investigation guided people into the exploration of Tibetan Buddhism, an Eastern philosophy through which people in Western societies came to surmount these feelings of alienation. Indeed, Buddhist mode of thought is filled with the theme concerning man’s spiritual difficulties and needs, representing the theme of alienation-and-return. The most compressed symbolism through which this theme is represented is the mandala drawing of Tibetan Buddhism.

These feelings of isolation and division were thought to be caused by an ego-illusion, which were to be destroyed. Carl Jung was one of the initial Western practitioners to advocate the use of mandalas to achieve this destruction. When used as a therapeutic tool, a mandala is thought to support psychological healing and integration through the unification of opposites, especially when a mandala is created by a client. Also perceived as reflecting the universal inheritance of human kind, mandalas were regarded as archetypal symbols by Jung.

The presence of mandalas has been identified in Western cultures and European art work. For instance, Christianity has a strong connection to mandalas, as has Gnosticism and early Navarro and Pueblo cultures. Esoteric traditions such as alchemy and shamanism also make use of mandalas. Nevertheless, their origin stems from Eastern traditions of Buddhism and Hinduism.

An underlying concept in Tibetan Buddhism involves a belief in the impermanent characteristic of everything, including humans. The Tibetan tradition emphasises this momentary aspect of life through the creation of mandalas. These are made of different coloured sand which are then swept away, highlighting this aspect of fleetingness. Indeed, Tantric Buddhism, which is mainly linked to Tibetan Buddhism, places great emphasis on ritual and symbolism, especially that of the mandala.

Various symbolic associations are represented by mandalas. Mostly, mandalas have links to a sacred palace. When connected as such, a palace lies at the centre of the mandala. The palace has four gates which face the four quarters of the world and is situated within various layers of circles that form a protective barrier around it. Each layer represents a quality such as kindness or compassion, with every surrounding circle following a specific symbolic structure. At the centre of the mandala lies the deity, with whom the mandala is identified. It is the power of this religious figure that the mandala is thought to be invested with.

The use of mandalas as a psychotherapeutic tool was first used by Carl Jung as an expression of a person’s unconscious. Being greatly influenced by Eastern traditions, Jung delved into Tibetan Buddhist symbols. The circular shape of mandalas and their focus on a central point helps towards the integration of otherwise disorganised elements of the psyche, so Jung concluded. Indeed, he frequently observed the presence of mandalas in the dreams and paintings of clients. Jung viewed mandalas as symbols to draw, model, act out, or even describe to identify unconscious mechanisms at play that may be affecting the central wholeness of an individual. Jung used this art form to enable him to understand ideas he was developing in his thinking concerning the human psyche. Providing a grounding centre, mandalas may be used to ‘contain’ a person’s emotions; a way through which an individual is able to settle disorganised feelings. A change in an individual’s psychic state is represented in their mandala illustrations. Jung considered mandala symbolism as representing a deeper, indescribable, mystical process in which the psyche works to heal and defend itself. His awareness of the symbolism of mandalas as psychic concepts led him to argue for the vital existence of psycho-spiritual archetypes.

Since then, mandalas have been widely acknowledged as effective tools in art therapy. They are also used as a form of diagnosis and treatment method for emotional and psychological difficulties. In Jungian therapy, it has been recognised for a number of years now, that self-expression through artistic and visual modes have therapeutic benefits. A person’s most important thoughts and feelings, originating from the unconscious, are more easily expressed in images than in words. In actual fact, art psychotherapists and Jungian therapists use mandalas as a method through which people obtain increased self-awareness, and self-expression. Other therapeutic benefits found via the use of mandalas include conflict resolution, and healing. This is in agreement with Jung’s initial view of mandalas as representing an archetype of order of psychic integration and healing. The style this healing process took was what Jung came to name ‘circumambulation’, indicating an exclusive focus on the centre as the place of creative change. My own work as an integrative psychotherapist and developmental psychologist has also illuminated the benefits of art therapy both with adults who may not feel comfortable in communicating their emotions verbally, and with children who due to their young age and early stage of cognitive and verbal development, are more comfortable expressing themselves artistically.

‘A mandala is the psychological expression of the totality of the Self’.

Jung was one of the first psychoanalysts to view art as a valuable way for people to communicate both their conscious and unconscious desires, feelings, and thoughts. In line with his belief in mandalas as expressing the self in relation to the universal whole and as a representation of a person’s attempt towards achieving ‘individuation’, that is the course by which a person’s consciousness becomes unique to them, Jung placed great emphasis on the search for meaning as a fundamental human need and specifically emphasised notions around the involvement of religion, and concepts of the soul. Indeed, Jung further argued for the benefits in creating these circular symbols as a reflection of a person’s unique existential position and role.

Jung also considered the value and meaning of imagination. Not only did he analyse the form of mandalas drawn or represented by clients, Jung also explored their use of colour. When applied to mandalas, chosen colours used by the illustrator have specific meanings. Believing that chosen colours picked by each person reflected a deeper meaning about their personality, Jung therefore encouraged his clients to use colour. Although colours our very personal, each one of them represents specific symbolic meanings. Each colour also has both positive and negative elements to it.

By colouring the mandalas, people enter a deep state of engagement leading to self-discovery. The continual use and analysis of mandala creation and colouring can show change and progress throughout the therapeutic process. Jung observed that when used in such a way, it was advisable to date each mandala to identify specific changes experienced by each illustrator.

When people are unsure about their progress achieved during therapy, a further analysis of each mandala is likely to help them identify progress. This may be done by analysing the outer edge of the design or its centre piece, as well as the use of different colours, which may have changed. For instance, each piece denotes special meanings depending on the shape of the mandala, or the inclusion of particular symbols. Humans have always star gazed for guidance. A star is filled with meanings related to the self, the world, and the cosmos as a whole. The use of a star signifies navigation, intuition, and light–representing confident in an ability to stand alone and be more independent. The use of brighter colours may also denote this development. The use of mandala illustrating is not confined to psychotherapeutic spaces and can be used by anyone wanting to explore and promote their artistic potential.

Tibetan Buddhism has powerful connections to mandala symbolism of a sacred and mystical nature. Greatly inspired by Tibetan Buddhism, Carl Jung regarded mandalas as a depiction of a person’s unconscious and was the first psychoanalysis to advocate the use of mandalas as meaningful psychological tools. Originating from this view, the mandala has become a very beneficial symbol used in art therapy and Jungian depth therapy. Aiming to acquire a meaningful life, and following on from existential traditions, the creation of such circular symbol was according to Jung, a way through which individuals place themselves in accordance to their environment.