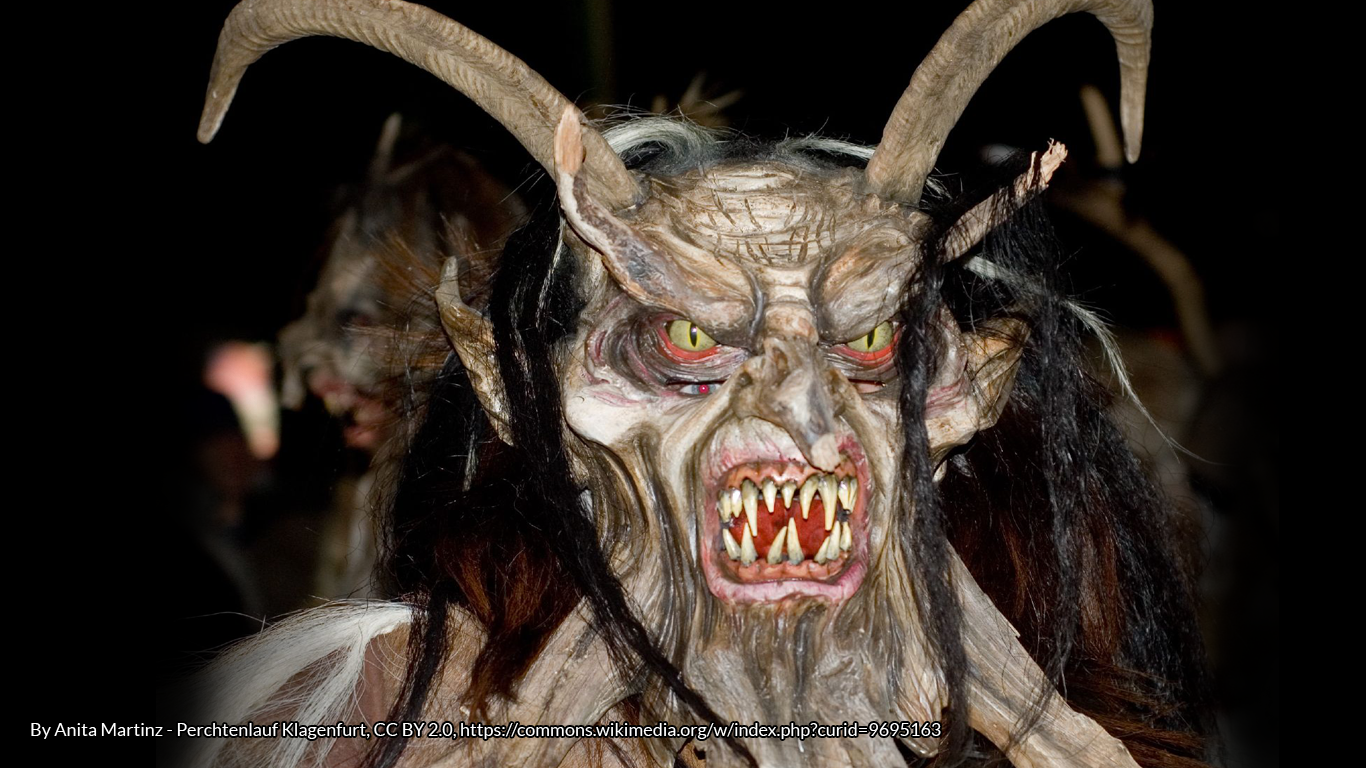 Beware! Lock up your children, clutch your mince pies, and huddle in against the snow. Haven’t you heard? Krampus is coming to town …

As the darkness falls in the snow-filled streets of Alpine Europe, crowds begin to gather. They nervously vie for the best places to see the parade from, but all want a spot where they won’t fall prey to  the vicious beatings meted out by the devils that are about to descend. Unnerved murmurs spread through the crowd as the lights glow red in the smoky air, where even the most level-headed bystander can’t help but think of the fires of hell, as the demons are unleashed on the town. A small boy wanders, cheekily, too close to the railing. His mother reaches for his hand … but it’s too late. Krampus has snatched him up in his clawed hands. The boy is carried off with the parade of fur-clad men, smiling gleefully up into the grimacing face of the creature that now has him, holding on to his curved horns and poking at his fanged teeth. No one is safe from the Perchten when the Krampuslauf is in town.

The Krampus run – sometimes called Perchtenlauf – is an annual festival celebrated throughout the Alpine region, from Austria and South Tyrol in Italy, to Slovenia, Hungary, Germany and the Czech Republic. Participants dress up in traditional Perchten costumes, covering themselves in fur, donning horns and the gaping jaws of devils, and cavort through the village streets swatting at bystanders, all the time the cowbells on their backsides jangling like the promise of Santa’s sleigh.

Who are Krampus and the Perchten?

The Perchten are said to be creatures that scare off the spirits of winter, or mountain spirits themselves. The Perchten are seen to be the cohorts of the Krampus, himself the counterpart to Saint Nikolaus – who we might recognise as Father Christmas. Some suggest that Krampus originates from ancient Norse mythology, as the son of the goddess Hel. He is certainly an anti-hero that reminds us of, not just the Devil, but also of the satyrs of Greek myth.
In folklore, Krampus and St. Nikolaus both arrive around December 5th. Children leave out their shoes for Saint Nikolaus, who will fill them with gifts if they have been good, or a rod if they have been naughty. In contrast, Krampus carries a birch bundle to beat naughty children before stuffing them into his basket and carrying them off – some say to his lair to be eaten, while others say to the underworld.

Krampus has gained popularity in recent years, with the tradition spreading as far as the US. Krampus, a horror film bearing the beast’s name, even hit the box-offices last year, although many would argue that it bears little resemblance to the folkloric tradition.

Author Al Ridenour has led the Krampus-resurgence in LA, starting a Krampus carnival in the city, running mask making workshops, and recently releasing a new book, The Krampus and the Old, Dark Christmas: Roots and Rebirth of the Folkloric Devil. Read more about this from Al himself in his #FolkloreThursday article, ‘A Californian Krampus‘.

LA is offering its own antidote to Christmas: Krampuslauf LA (This one is from 2013)

The tradition has a history of controversy. The church tried to ban Krampusnacht as far back as the 12th century. During World War II, Krampus was seen by fascists as a thing of the Social Democrats. Today, the festivities are still considered something to be handled carefully. In recent years, concerns have been raised that refugees who have fled to Austria – including children – might find the parade frightening, as many of us would! Instead of banning the parade, the town of Lienz developed education sessions for the children, to help them understand the origins of the tradition and encourage them get involved in the celebrations.

Whether you love or hate Krampus, it seems he is here to stay, and possibly coming to a town near you very, very soon …

Check out these Krampus Christmas gifts!