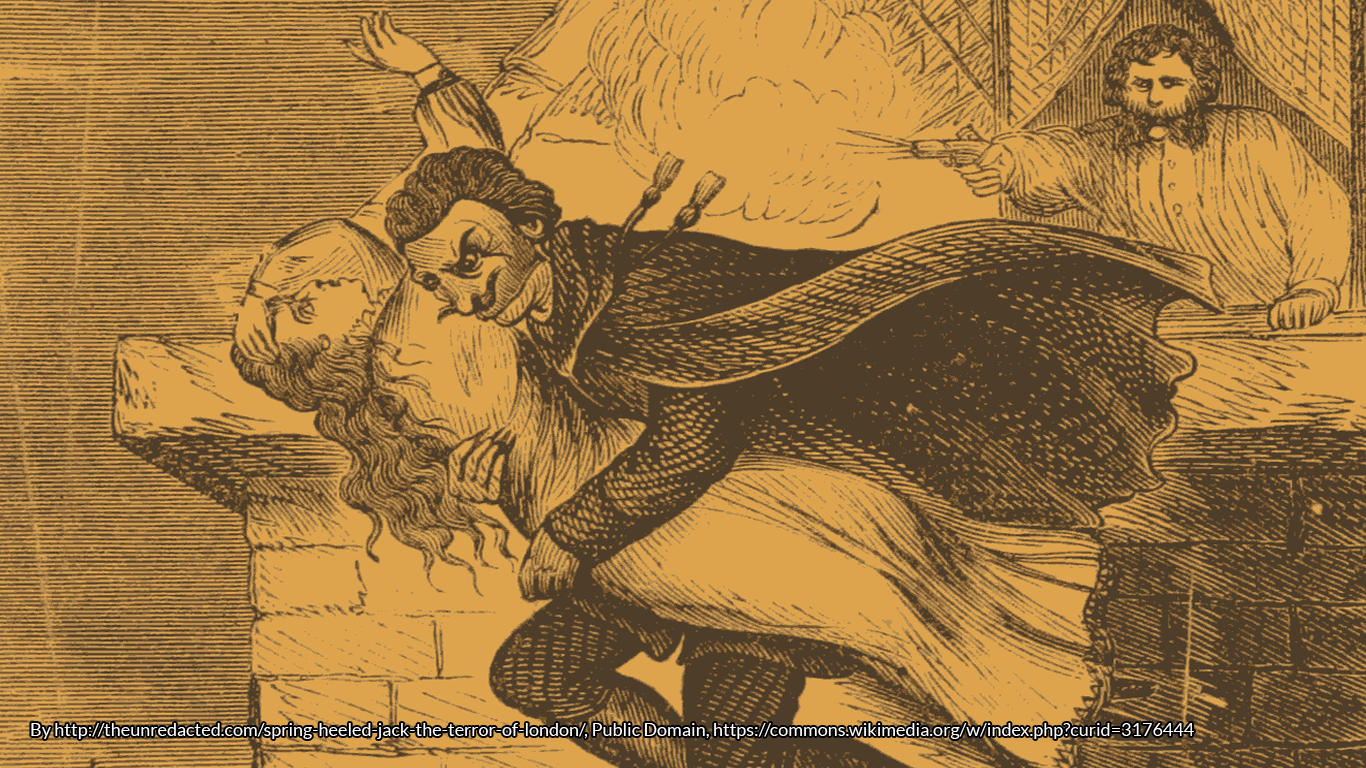 In 1838, the year Queen Victoria came to the throne, London was bedevilled by a clawed, fire-breathing, shape-shifting demon popularly known as Spring-heeled Jack. A rather haphazard creation of local gossip, newspaper reports, and penny dreadful fiction, this urban legend, once largely forgotten, is now being revived through a contemporary interest in steampunk and reimagined Victoriana.

The legend of Spring-heeled Jack originated with the frightening appearance of a ghostly white bull around Barnes Common in the autumn of 1837. As stories of what was initially called the “Suburban Ghost” migrated towards the capital from the villages that fringed south London, this mercurial character changed from a bull to a bear or imp, and then “an unearthly warrior clad in armour of polished brass, with spring shoes and large claw gloves.” (1) It was only in January 1838 that the metropolitan press, gathering snippets of gossip from across London, came to name him Spring-heeled Jack. Given individuality by his catchy name, Spring-heeled Jack transitioned from being just another local ghost scare to something more memorable and enduring, his name drawing together the many manifestations into one seemingly inhuman, shape-shifting figure.

Spring-heeled Jack typically appeared at night, and his preferred victims were young women. What started as mere attempts to scare quickly escalated into more vicious assaults. In Isleworth he and several armoured companions set upon a carpenter and tore his clothes to shreds with their claws. The press suggested that his many different guises were the result of a group of ‘gentlemen’ engaged in a dastardly wager to frighten people into losing their wits. (2) Yet, when journalists tried tracking down victims or witnesses, they could not find anyone. Like many modern urban legends, these things were often said to have happened to a friend of a friend.

The stories were given a degree of credibility when, in February 1838, an identifiable victim finally came forward. In what is one of the most detailed and often repeated accounts, 18-year-old Jane Alsop told the magistrates, how on the evening of 20th February, a cloaked man had appeared at the gate of her family home in Bearbinder Lane, near Bow. He had asked her to bring a light for the police had caught Spring-heeled Jack in the lane. She did so, but the moment she handed it to him he cast off his cloak, put the candle to his chest, and revealed to her “a most hideous and frightful appearance, and vomited forth a quantity of blue and white flame from his mouth, and his eyes resembled red balls of fire.” Alsop noted that “he wore a large helmet; and his dress, which appeared to fit him very tight, appeared to resemble white oil-skin.” (3) Spring-heeled Jack set upon her with what she believed were metal claws. She managed to get away from him but he pursued her to her front door, where he continued to rip at her clothes and skin, and tore hair from her head. She was eventually saved by her older sister who pulled her inside the house.

A few nights later in Limehouse, Lucy Scales was returning home with her sister when a gaunt man ‘of gentlemanly appearance’ stepped out of Green Dragon Alley and spat a ball of flame in her face. She collapsed and suffered a fit. This time, however, the attacker simply walked away. (4)

While Londoners indulged ideas of devils, demons, and ghosts, the authorities took a more sceptical approach. They explained away the fire breathing as a theatrical trick, the different descriptions as a range of disguises, and the many appearances as a result of copycat activities. Two men were actually brought to court for the assault on Jane Alsop, although there was insufficient evidence to convict them. (5)

From spring 1838, Spring-heeled Jack left London and roamed erratically around England, made several excursions across the Scottish border, and appeared in Wales towards the end of the century. (6) He made a brief return to public attention when his name was linked to pranks played upon sentries in Aldershot army camp in 1877, and Colchester army camp in 1878. At the latter, a soldier finally succeeded in bayoneting one of these “military Spring-heeled Jacks” in the leg. The prankster was revealed to be a subaltern officer. (7)

Alongside his folkloric accounts, Spring-heeled Jack also took on various fictional incarnations, firstly in plays in the 1860s and then in penny dreadfuls. In serials from 1867-68 and 1878-79 he was transformed into a more heroic figure; a costumed avenger who was willing to flout the law to see justice served. (8)

In the provinces the claws and fire-breathing, things that had contributed to his potent diabolical image in London, disappeared. Yet, even as he became less threatening, so accounts of his superhuman agility evolved. The press had initially spoken of his athleticism and evasiveness, but over the years local gossip and regional press reports, muddied by his penny dreadful stories, exaggerated his leaping abilities. By the time he made a late appearance in Liverpool in 1904, he was said to have been seen bounding down the street and leaping over rooftops. (9)

Spring-heeled Jack’s hold on the Victorian imagination faded towards the end of the nineteenth century. His name, so vital in holding together an array of contradictory accounts, began to be associated with any peculiar sight or swift-footed criminal. By the Edwardian period, he had been reduced to little more than a bogeyman with whom parents could frighten their children to ensure they were home before dark. (10)

Treated as a curious footnote of Victorian history for much of the twentieth century, Spring-heeled Jack has seen something of a revival thanks to the ever-increasing appeal of steampunk culture in the twenty-first century. Attuned to its fascination with the Victorian weird and fantastical, in recent years he has cropped up in comics, novels, the Assassins Creed Syndicate computer game, and, most notably, Robert Valentine and Jack Bowman’s (under the pen name Gareth Parker) series of audio dramas, The Spring-heeled Jack Saga. Carefully researched, the saga faithfully riffs upon the original legend while capturing all the excitement of his Victorian penny dreadful adventures. (11)

Spring-heeled Jack powerfully fused the medieval and the modern in being a fire-breathing demon who ran amok in the industrial cities of nineteenth-century England. We may have safely contained him by moving him from living folklore into steampunk fiction, but the recent “killer clown” scare has perhaps given us a taste of the unease our Victorian ancestors would have felt upon hearing about this strangely garbed and malevolent urban menace.

Win a copy of The Legend of Spring-heeled Jack by Dr. Karl Bell

Karl Bell and the lovely team over at Boydell and Brewer have offered a copy of The Legend of Spring-heeled Jack for a lucky #FolkloreThursday reader.

WINNER of the 2013 Katharine Briggs Award, this book uses the nineteenth-century legend of Spring-Heeled Jack to analyse and challenge current notions of Victorian popular cultures. Starting as oral rumours, this supposedly supernatural entity moved from rural folklore to metropolitan press sensation, co-existing in literary and theatrical forms before finally degenerating into a nursery lore bogeyman to frighten children. A mercurial and unfixed cultural phenomenon, Spring-Heeled Jack found purchase in both older folkloric traditions and emerging forms of entertainment. Through this intriguing study of a unique and unsettling figure, Karl Bell complicates our appreciation of the differences, interactions and similarities between various types of popular culture between 1837 and 1904. The book draws upon a rich variety of primary source material including folklorist accounts, street ballads, several series of “penny dreadful” stories (and illustrations), journals, magazines, newspapers, comics, court accounts, autobiographies and published reminiscences. The Legend of Spring-Heeled Jack is impressively researched social history and provides a fascinating insight into Victorian cultures. It will appeal to anyone with an interest in nineteenth-century English social and cultural history, folklore or literature.

Sign up for the #FolkloreThursday newsletter to enter (valid February 2017).

Dr Karl Bell is a Senior Lecturer in History at the University of Portsmouth and director of the Supernatural Cities project. His research interests include magic and the occult, supernatural folklore and gothic monsters. He is the author of The Magical Imagination: Magic and Modernity in Urban England, 1780-1914, and the award-winning The Legend of Spring-heeled Jack: Victorian Urban Folklore and Popular Culture. He is also co-editor of Dark City, a collection of ghost and horror tales set in Portsmouth. Follow him on Twitter on @imaginetheurban or @drkarlbell.