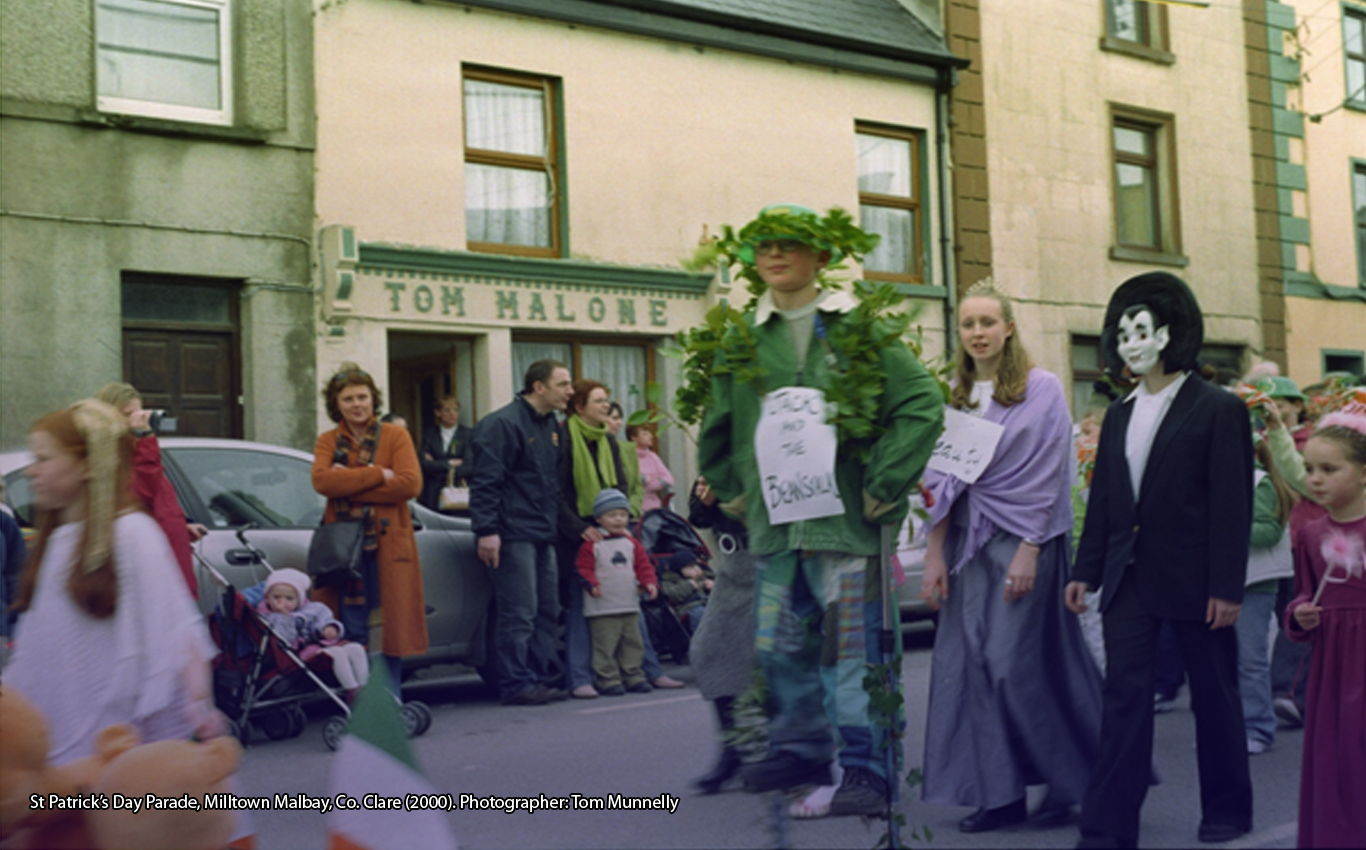 St Patrick’s Day Traditions: ‘My Patrick’s Pot on you!’

St Patrick’s Day, 17th March, is a key fixture in the Irish calendar, and indeed in many other places throughout the world. It may not have the wealth of traditions associated with the traditional Irish quarter days but its popularity and the festivities associated with it make it central to the Irish year. Some of the traditions and folklore associated with the festival as recorded in the Schools’ Folklore Scheme, carried out by school children in Ireland in the 1930s, are outlined below. The stories can be accessed at www.duchas.ie.

The feast day is on the fixed date of the 17th March each year, the supposed date of the saint’s death, though several stories from Co. Louth state that there were two parties who celebrated the saint’s feast on the 8th March and the other on the 9th March, and to appease both groups, the dates were added together to give the 17th.[2] At any rate, the date is associated with an improvement in weather and occurs right in the middle of spring, ní dírí an cnámh ar dhrom lachan ná Lá ‘le Pádraig i lár an earraigh,[3] ‘No straighter the bone in a duck’s back than the occurrence of St Patrick’s Day in the middle of spring,’ as the Irish proverb goes. Indeed, the 1st February, St Brigid’s Day, typically marks the start of spring in Ireland. The two saints are said to have contested with each other on their respective days, as recounted by James Dineen, Co. Limerick:

For this reason people like to plant potatoes at this time, ‘Plant with St Patrick and dig with King William [12th July]’ as one saying from Co. Donegal goes.[5]

Of course, weather and spring-sowing are not the first things that spring to mind when thinking of the festival. Patrick is credited with being most influential in the conversion of the Irish to Christianity in the 5th Century by using the three-leaved shamrock to explain the Holy Trinity. One of his famous converts was Oisín — son of Fionn mac Cumhaill and a member of the mythological Fianna warrior band — when he returned from Tír na nÓg, and indeed dialogues between the two date from the 12th Century and many examples appear in modern folklore.[6] Oisín finally conceded to Patrick and Christianity, and in a typical comical version of his conversion, the saint sticks his crozier in the ground to complete the task. In doing so the staff goes through Oisín’s foot, but the warrior, thinking it a part of the ceremony, does not flinch or say a word.[7] 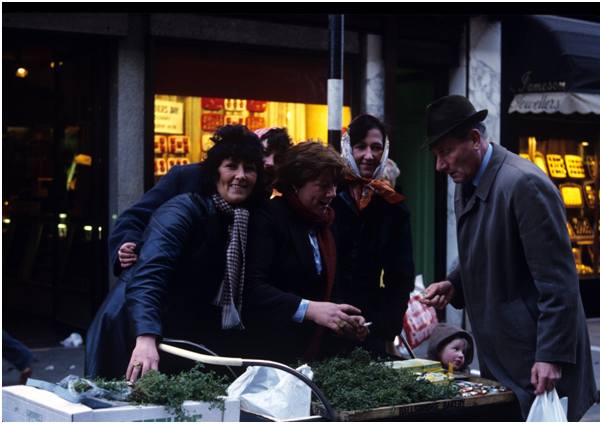 The first mention of the wearing of the shamrock is in 1681: ‘The Irish of all condicions wore crosses in their hats, some of pins, some of green ribbon, and the vulgar superstitiously wear shamroges, 3-leaved grass, which they likewise eat (they say) to cause a sweet breath’.[9] Shamrock is worn by all on this day and people also send it to relatives in England and America so they have it in time for the big day.[10] In Co. Cavan in the 1930s, the size of the sprig of shamrock worn reflected on the wearer: ‘Wearing a small piece of shamrock was considered a sign of a “mean person” hence the bunch of shamrocks as big as a head of cabbage worn by some men’.[11] Another custom relating to the shamrock is ‘drowning the shamrock’ which did not equate to drinking excessively but to a drinking habit: ‘The men “drown” the shamrock in a glass of whiskey. They dip the shamrock into the spirit and then they drink it’.[12] St Patrick himself was not averse to having a drink and indeed there is a story about him being given a short measure in a pot by a landlady. Patrick told her to stop short-changing customers and to get rid of a black dog that sat near the counter. Patrick returned six months later and the dog was gone. ‘He has gone away,’ the landlady said, ‘and he was so thin and weak that he was hardly able to walk.’ Patrick explained the dog was the devil and that he was feeding off her dishonesty. The drink or pot became known as Pota Phádraig ‘St Patrick’s Pot’.[13] On St Patrick’s Day, ‘My Patrick’s Pot on you’ was a common salutation and the person who said it first would get stood a drink, though the compliment was always returned.[14] As well as falling in the middle of spring, St Patrick’s Day usually falls during Lent and people are free from their Lenten pledges on his day also. A story from Co. Clare suggests St Patrick will look favourably on the person who drinks in his honour, especially saying he is supposed to have the last say in the fate of the Irish on the Last Day, ‘Saint Patrick’s Pot he’ll forget us not’ being the salutation uttered there.[15] With all this in mind, it is not a surprise some people went overboard honouring the saint and a woman making her way home from the festivities after one too many uttered ‘Oh, wisha, St Patrick what I have suffered for you!’[16] Public houses were ordered to close on St Patrick’s Day under the Intoxicating Liquor Act, 1927, and according to Conchobhar Ó Liatháin, ‘St Patrick’s Day has lost some of its glamour since the State ordained that public houses must remain closed on 17th March. Previous to the passing of this enactment many thirsty souls went for their Patrick’s Pot (of stout) but now the feast is kept in more reverential manner’.[17] 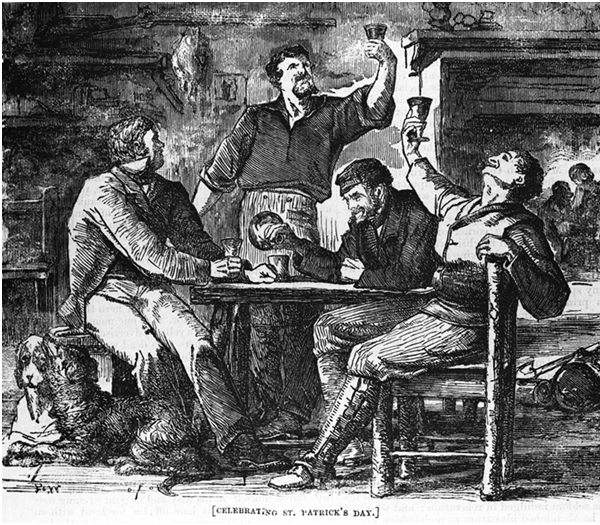 As well as the shamrock, crosses were usually worn, especially by children. One such cross was made by the father or mother who blackened a stick in the fire and marked each family member’s sleeve with the burnt end.[18] Other crosses were made by the children themselves and resembled rosettes made of paper, cardboard and bits of silk. Good descriptions of the crosses are given in material from a school in Co. Kerry, the first being the cross as worn by girls:

‘The first thing I got was two pieces of stiff cardboard, one piece longer than the other. I then covered these pieces with some nice pieces of silk and I sewed them together in the shape of a cross. For about a month before St Patrick’s Day I used to be gathering the nicest bits of silk or satin I could find to cut them into narrow strips to make nice, neat, fluffy little bundles of them. I then sewed one bundle on each of the four ends and one on the centre of the cross. Then my cross was complete and ready to wear on my left arm on St Patrick’s Day and for a whole week after going to school. There wasn’t any meas [respect] on any little girl that had not a cross for St Patrick’s Day.’[19] 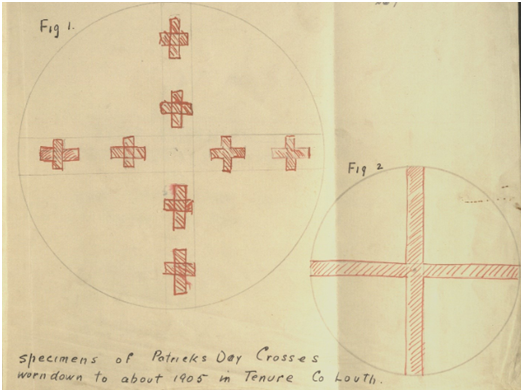 In the case of the boys, it was a lot more than cloth and coloured paper in question and an illustration was included:

The first thing I got when I was making my cross was a plain piece of paper. Then I got a cup and I put the mouth of the cup down on the paper and I drew a line around the cup. Then I took off the cup and I cut round the line I had drawn. Then I divided it into quarters and I painted each quarter a different colour – red, green, yellow and blue. I didn’t know in the world how would I get red but at last I thought of a plan. I pricked my finger with a pin and with the blood that came out of my finger I painted one quarter red. The way I got the green was I got a leaf of cabbage and I chewed it in my mouth and coloured another quarter with green juice. The next trouble was to coax an egg from my mother to get the yolk of it. Then I painted the other quarter with the yolk of the egg…. Then I had my cross made and wore it proudly up on my cap on St Patrick’s Day.[20] 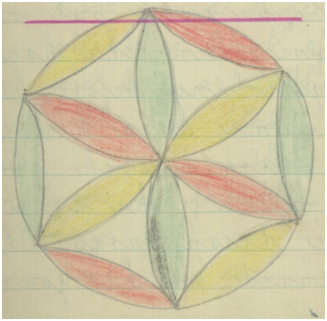 Boys’ cross they pinned to their caps.

The St Patrick’s Day parade is a more recent import to Ireland and has its origins in 18th century North America where military parades were held on that day to encourage the recruitment of Irishmen to the British and US armies.[22] In Ireland, some of these parades or processions were incorporated into pilgrimages to local holy wells; there are many throughout Ireland where Patrick is said to have baptized the converts.[23] One such well is in Bunduff, Co. Leitrim, where there is a pilgrimage by the people of North Leitrim and North Sligo on St Patrick’s Day, ‘hymns are sung including a hymn to St Patrick. On the way going and coming home from the wells the local bands play patriotic tunes. The people bring holy water home with them and have great belief in it’.[24] A well called ‘Shavers Well’ or Tobar an Bhearrtha (‘Well of the Shaving’) is in the same vicinity and is also dedicated to St Patrick apparently and ‘goes to prove that St Patrick did not wear a beard so that all the pictures of him must be all wrong’.[25]

Whether you plan to make your own cross for St Patrick’s Day, wear the shamrock, drown the shamrock, attend a parade, visit one of Patrick’s holy wells, Mo Phota Phádraig ort — My Patrick’s Pot on you!

More stories of St Patrick and photos of the feast day can be accessed at www.duchas.ie.