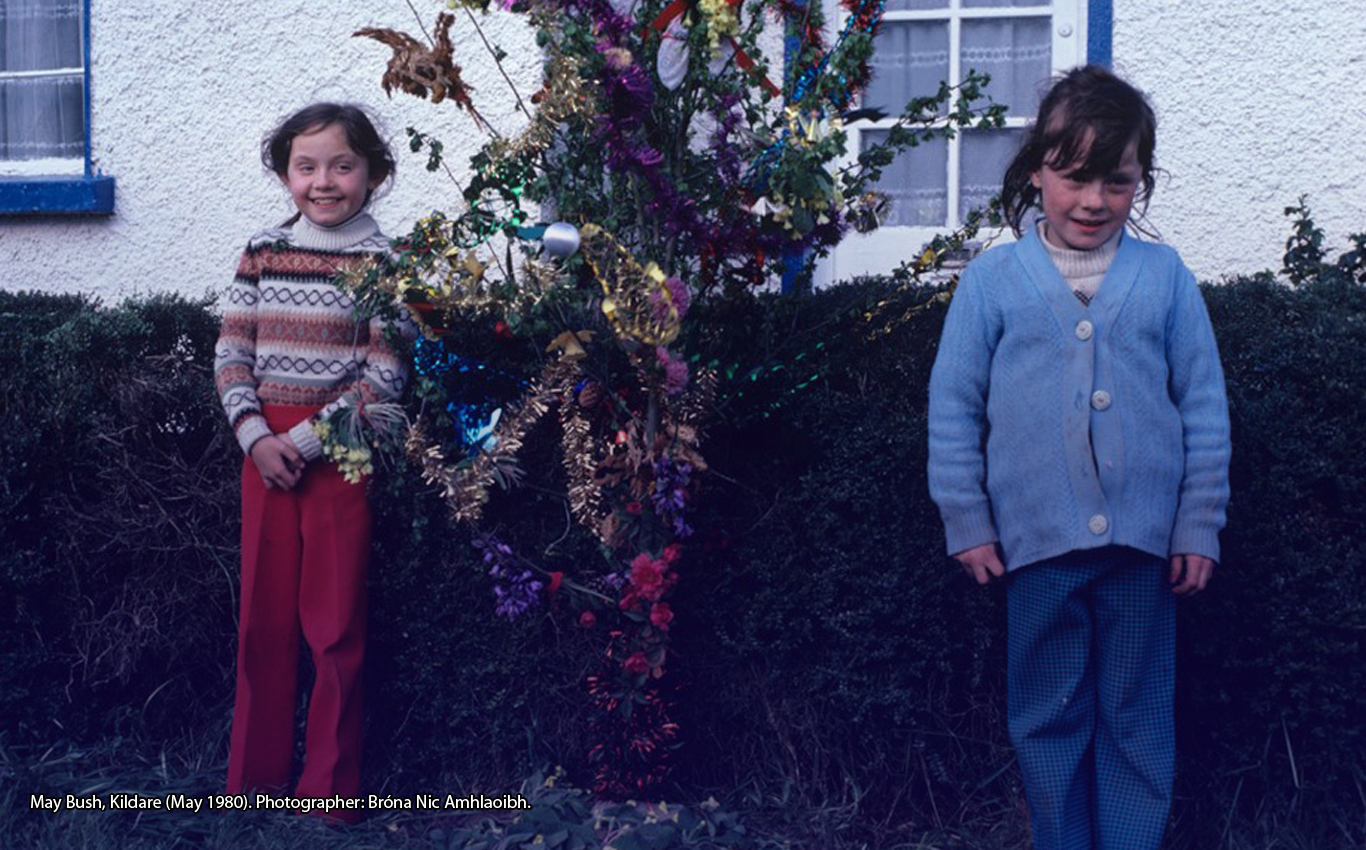 In Cork, on May morning before sunrise, a person went out and brought back a branch of hazel, holly and mountain ash and returned to the house singing the above verse to ‘bring in the summer’.[1] In Ireland, as in many parts of Western Europe, May marked the beginning of summer as the folklorist Caoimhín Ó Danachair remarks:

May Day is the second of the old quarter days, and is linked to the others by a remarkable series of beliefs and customs which are concerned with time of year, the weather, seasonal work, magical protection, divination, farm produce, assemblies, processions and the activities of supernatural beings. Those associated with May Eve and May Day mark the coming of Summer; they welcome the season and make provision for it in both the natural and the supernatural planes.[2]

According to his colleague Seán Ó Súilleabháin, based on the hundreds of customs and beliefs relating to May Day, it seems to have been the most important festival in ancient Ireland.[3] Using material collected by school children as part of the Schools’ Folklore Scheme in Ireland in the 1930s, a taste of the many traditions will be outlined below.  All the stories can be accessed at www.duchas.ie.

The main focus of May Day was the celebration of the beginning of summer and this was done by picking flowers, dressing boughs or decorating bushes. In parts of Donegal, the ceremony not only welcomed the summer, but also had a protective and religious element, May being the month for Marian devotions in the Catholic Church:

We procure a branch preferably cross-shaped. Then we send the children to pluck a bunch of primroses and we string them onto the branch we have procured. The branch thus decorated is then erected in the midden before sunset. The belief was prevalent that neighbouring witches could steal the milk during the entire year if they succeeded in taking it on May Eve before sunset. It was believed that the witch could not exercise her charm near the homestead where a May Pole was erected. Another custom is to throw a handful of the same primroses at your neighbour’s door in honour of the Blessed Virgin.[4]

The May Bush is especially prevalent in the east of the country and it may be placed outside the house or a communal bush may be erected at a crossroads or some other convenient place. It is decorated with flowers, ribbons, coloured paper and eggshells, usually leftover from the Easter Sunday feast, and then the spree begins. Sally Geoghegan describes the scene in her part of Wicklow:

A few boys then go and cut a sceach [whitethorn] tree from the root, one that is in blossom. When the May Bush arrives it is stuck into the ground at the Killiskey Bridge. The candles, flowers and egg shells are then stuck on it. The candles are then lighted and the May Bush looks very nice. Other boys make on a bonefire a short distance away from the May Bush, and Killiskey for that night is a very pleasant place. The May Bush and the bonefire are all ready now, and some young boy is sent around the village to call all the people out to enjoy themselves. Soon the place is full. The older people sitting up on the bridge, while the young people dance around and play music.[5]

In a few places the children dressed up, decorated a small bush and carried it from house to house, singing songs and collecting money: ‘A long life and a happy wife and something for the May Bush’.[6] As part of the festivities, a May Queen may be elected in some parts, as was the case in 1937 in The Faythe, Wexford:

On the first day of May they pick the biggest girl in the crowd for the Queen of May. She is dressed in a long white dress and on her head she wears a crown of flowers. They go around the street and shout out ‘A penny on the May bush’. And any person that is passing by gives the Queen of May a penny. When they come home they have a party with the money that they get on the May bush. In the year 1937 seven of my companions and myself went around and we got one and a penny. Sadie Pierce was the Queen of May.[7]

Butter, dew and other charms

The protective aspect of the May Pole was mentioned above, and indeed there was a large element of supernatural and dark magic practices on May Eve especially. People were particularly anxious to protect the household livestock and dairy produce on this night. To lose some of your produce on May Eve did not bode well for supplies for the rest of the year. To counteract this, ‘holy water is thrown on the stock, crops, fields, out-offices, wells and other places to prevent “piseogs” [charms] being worked, for on that night principally, some people visit wells and the land of their neighbours and work “piseogs” on the people’.[8] Taking milk, or the profit of the milk, was the most common misdeed and people were on the lookout for hares near the cows with the ‘hare-hag’ at her busiest at this time, milk of course being an important food as well as being used to make butter. Many stories like the following from Kilkenny are told of encounters with her:

William Raftis said the milk was going on him. He got up early May Day loaded his gun and went out to the fields where the cows were and watched. A hare came into the field and went over to the first cow he met and sucked a tit or two… Raftis fired at the hare and broke her hind leg. He followed the hare out of the field and kept her in sight until she came to a cabin. She jumped in through a back window. Raftis burst in the door and found the owner, an old woman in bed and her leg broken.[9]

If you hadn’t the ability to change yourself into a hare, you could go into your neighbour’s land and collect the dew off the grass in their fields and thus steal their milk and butter. This was usually done by dragging a spancel or rope over the grass to collect the dew and saying certain incantations:

The roots of the grass
And the tops of the corn
And my neighbour’s milk
Both night and mornin’.[10]

Other words said are, ‘Gather far, gather near, gather all the milk and butter here!’[11] In Granard, Longford, Mrs McNamara describes the process of ‘taking the butter’:

If you go out into your neighbour’s field, where the cows are, before sunrise on a May morning, while the dew is on the grass, and bring a hay rope with you. Draw the rope to and fro in the dew, in front of the cow’s breath, and mumble to yourself while dragging the rope through the dew:

You drag the rope several times, before each cow and you repeat the saying, as long as you continue dragging the rope.[12]

Skimming the water off the top of your neighbour’s well was said to have a similar effect. If a person was the victim of such witchery they could churn and churn but no butter would ever come. To remedy this, the sock and coulter of the plough is reddened in the fire and placed under the churn; the culprit will feel the heat, rush to your door and plead for you to stop.[13]

If you are caught taking dew off your neighbour’s land on May morning, tell them it is strictly for beauty and health benefits, as the saying goes: ‘If you wash your face in the May dew, your cheeks will be rosy all the year through’.[14] It is said to protect the skin from sunburn and hands washed in May morning dew will be able to loosen any knot.[15] Finally, although it is looked upon as the beginning of summer, don’t pack the winter clothes away just yet, as another saying goes, ‘Ne’er cast a clout ’til May is out!’[16]

More stories regarding May Day can be found on www.duchas.ie. See also Kevin Danaher’s The Year in Ireland.[17]

[1] National Folklore Collection, Schools’ Collection (hereafter referred to as NFCS), 285:13. This material is available to view on www.duchas.ie and all references and links to this material are clickable.