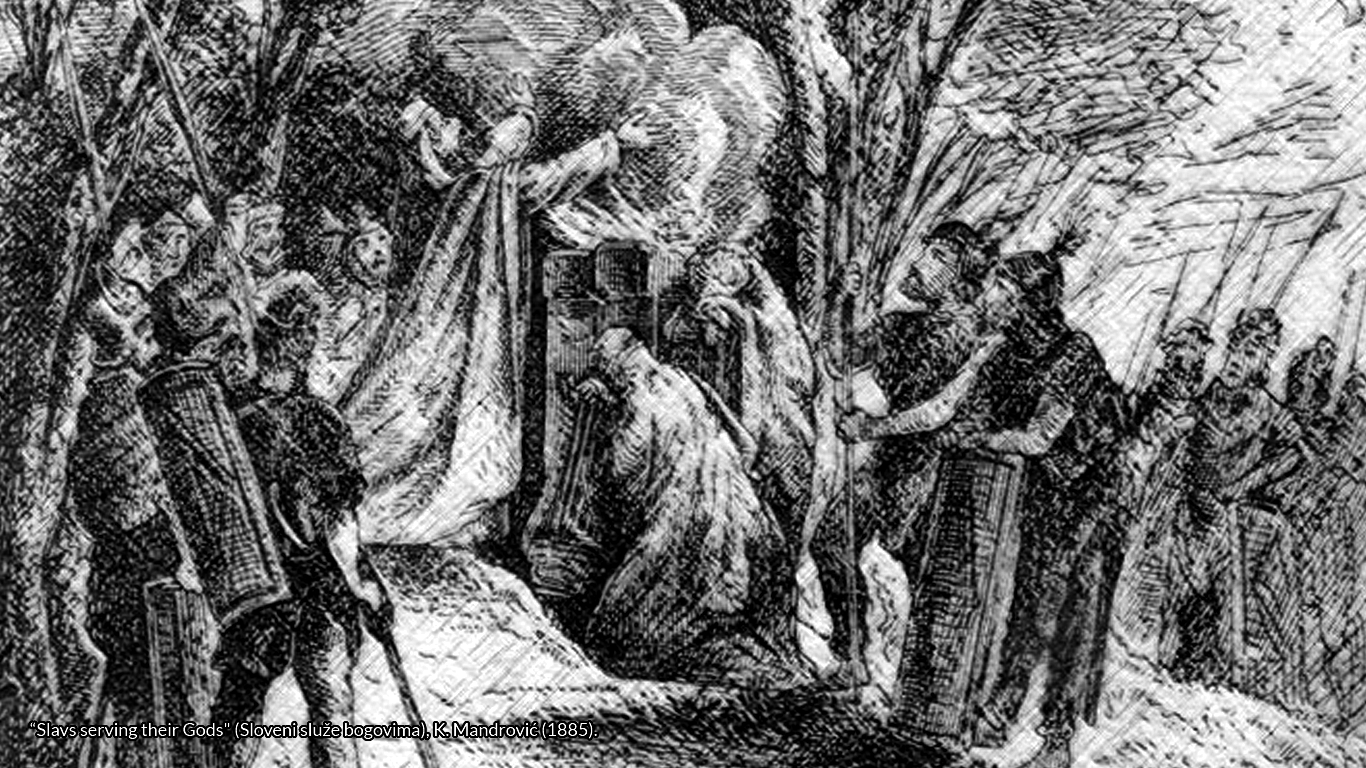 ‘By good fortune, when you first saw me and greeted me, you called me mother and kissed my hand; by doing this you made yourself my son. I have five sons and each one of them is a Zmaj. Whenever they see a man in here, they tear him to pieces; I won’t let them do this to you.’

Then she beckoned the prisoner to take a seat and began telling him:

‘My first son is so stealthy, that he can take a live lamb from inside a live ewe without her even noticing. My second son is so skilled in following a scent and finding tracks, that he will discover them even if they are nine years old. My third son is such a skilled mason, that he is able to, in the blink of an eye, build a tall tower. My fourth son is so skilled with his bow and arrow, that he can shoot a star in the sky. And my fifth one is so skilled in catching things, that he can grab hold of thunder with his bare hands. And if they cannot find the Tzar’s daughter and bring her back to you, no-one in this whole world can.’

Serbian storytelling tradition is among the oldest and richest in Europe. Settling in the Balkans in the 6th and 7th century during the period of the Great Migration of the European peoples, Serbs brought with them their pagan gods, rituals and beliefs to see them through their long journey from the East. Like any other society at the time, they lived in a highly symbolic world, with no wall separating the magic from the ‘reality’—if they heard thunder, it was God speaking to them (Perun); when they roamed the mountains, they had to tread carefully for they were in the realm of Vilas (forest nymphs); their watermills were meeting places of Vampires (were-wolves); when they looked to the fire, a deity was there, too (Svarog, or Svarožić). Although the introduction and adoption of Christianity as the state religion in the 9th century saw the pagan polytheism pushed aside forcibly in an attempt to have it uprooted for good, old myths remained strong, especially among the rural population. While the peasants accepted baptism and Christ, they saw Christianity as an addition to old Slavic mythology, rather than a replacement of it. Thus, a specific type of Christianity arose, where old rites and cults of old deities blended with new holidays and saints (as everything else that originated before and after in the Balkans, that melting pot of Europe, the crossroads where peoples and cultures and traditions meet, fall in love and give birth to new and unique forms).

Serbian folk tales, fables and fairy tales developed at this intersection of old pagan polytheistic mythology and Christianity, sometimes arising from myth, at other times being woven into the body of a myth and adapted to it. Over time, new elements and themes were added; sometimes from other nations and traditions, brought by travellers and learned people, at other times as a reflection on the development or a particular state of the Serbian society itself. Thus, Serbian folk and fairy tales abound with many of the core elements, motifs and characters that can be found in folklore of many other nations, such as animal heroes, witches, giants or even ordinary folk who, either through some magical intervention or, often, through ‘outsmarting’ (this seems to be a highly popular theme in Serbian folklore) overcome evil adversaries and rise to glory. However, at the very top of the Serbian mythological pantheon sit two very Serbian royalties: His Majesty The Zmaj, and Her Majesty The Vila.

His Majesty The Zmaj

In Serbian and South Slavic mythology, there is a differentiation between two types of dragon-like creatures: Zmaj [zmahy] /zmai/ and Aždaja [azh-dah-ya] /,aʒ’da:ja/. Whilst Zmaj can be good or bad, a man’s ally or foe, and is generally respected as a creature of extraordinary strength and a worthy opponent, Aždaja is a being of pure evil. It is a mythical creature resembling a huge winged snake or a lizard, often with three or nine heads, four stumpy legs and bat-like wings. It lives in hostile and dark places, spits blue fire and creates an infernal racket with its terrible shrieks; it is voracious and ferocious. It is believed that an Aždaja comes into being when a snake keeps devouring other snakes and then grows wings and legs one hundred years later (the famous Christian icon is described in Serbian as ‘St George slaying the Aždaja’, not a Zmaj).

While Aždaja is simply an evil monster, Zmaj’s attributes are very different. Zmaj is a mythical winged creature of extraordinary strength, sometimes similar to Aždaja in elements of appearance, with one or more heads. Whistling and howling resound through the land when he flies across the sky, his mouth and wings spitting fire. He has the ability to shape-shift into an eagle, snake, other animals or into a human. He is believed to be half-human, in fact, powerful and seductive. As such, Zmaj is a unique feature of Serbian mythology—claims Veselin Čajkanović, Serbian classical scholar and ethnologist (among many other things) and the author of ‘The Folklore and Religion Studies’ (1924). Often seen as a tribal protector and/or an incarnation of the soul of a highly respected ancestor, Zmaj has a special place in the Serbian mythological pantheon. He can be either good or evil in relation to humans, depending on his personality and the specific set of circumstances (i.e. if angered, he will retaliate). Legend has it that Serbia gained a new Zmaj once a year, from a lake near a certain village; a fiery ball would rise into the sky and burst to pieces around midnight—one of these pieces would become a Zmaj, and the others would fly behind him in the night sky until his wings were fully developed and he had found a place to settle in. Zmajs were considered to be the protectors of the places (usually mountains) they settled in. A Zmaj was forever keen on marrying a beautiful maiden, and from this kind of marriage great heroes, Zmaj-children were born. A smitten Zmaj, however, might forget and neglect his main duties—looking after the crops of his protectorate by warding off storms and bad weather, which then inevitably plague the villages under his protection. Women, on the other hand, cannot easily handle great love of a Zmaj—they begin to lose strength, to wilt and wither and must free themselves if they are to survive.

Zmaj is featured as a main character in a number of folk tales, legends, songs and poems, particularly following the Serbia’s defeat by the Ottoman Empire in the Battle of Kosovo in 1389. From this point onwards, Zmajs became a symbol of the fight against the occupiers and represent great Serbian heroes, whilst Aždajas represent the Ottoman foes. According to folklore, Despot Stefan Lazarević was born from the union of the Zmaj of the Mountain Jastrebac and Princess Milica, and this marks the beginning of the Zmaj-hero genealogy.

Her Majesty the Vila

‘Once upon a time there lived a maiden who was not born from mother and father but made by Vilas out of snow gathered from a bottomless pit under the light of St Ilija’s sun. The wind breathed life into her, mountain dew suckled her, the forest dressed her in leaves and the meadow adorned her with flowers. She was whiter than snow, her cheeks rosier than a rose, she was more radiant than the sun; she was such as the world had never seen before nor shall it ever see again.’

The Maiden Who Was Faster Than a Horse

Vila [vee-ler] /ʋǐːla/- Slavic version of nymph. According to Serbian folklore, Vilas dwell in rivers, lakes and ponds, sky and clouds, mountains, caves and other clandestine places. They sometimes appear as swans, horses, falcons, wolves or other animals that they can shape-shift into but usually they appear as beautiful maidens, naked or dressed in white with long flowing hair. Generally, they are benevolent unless provoked, they are just, they help the poor and the disadvantaged, and are a good omen. Woe betide those who anger them, however, for they will perish from a Vila’s glance.

It is said that if even one of her hairs is plucked (by a human), a Vila will die, or be forced to change back to her true shape. A human may gain the control of a Vila by stealing feathers from her wings. Once she gets them back, however, she will disappear.

A Vila’s voice is as beautiful as the rest of her, and one who hears it loses all thought of food, drink or sleep, at times, for days. Despite their feminine charms, however, Vilas are fierce warriors. When they battle, the earth is said to shake. They have healing and prophetic powers and are sometimes willing to help human beings. At other times they lure young men to dance with them, which according to their mood can be a very good or a very bad thing for the man. They ride on horses or deer when they hunt with their bows and arrows and will kill any man who defies them or breaks his word. Fairy circles of deep thick grass are left where they have danced; these should never be trodden upon, as this brings bad luck.

The most striking attribute of Serbian Vilas, however, is their freedom. They are free from two of the great inevitabilities: that of death (for humans) and that of eternal life (for Gods). Vilas decide when they shall die and when they shall be born again—a freedom that no other creature has.

How very appropriate, then, that they should symbolise the great power of pagan beliefs stubbornly refusing to surrender and disappear under the onslaught of Christianity, as seen in The Vila’s Mountain, or The Maiden Who Was Faster Than a Horse: the word of God, as Joanna Coleman points out, may be ‘the most powerful force of speech, yet other forces of enchantment continue thoroughly undaunted’—and will do, for as long as they please. 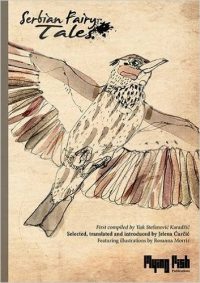 Serbian fairy tales were first compiled in 1821 by Vuk Stefanović Karadžić, ‘father of the study of Serbian folklore’, who was a collaborator, friend and a well-known contemporary of Brothers Grimm and Goethe. The 2013 collection contains 20 stories, selected and translated by Jelena Ćurčić and illustrated by Rosanna Morris. The book also contains a wealth of information about the origin of the tales, about Vuk Stefanović Karadžić, Serbian folklore and mythology and Serbian language, shining a light on the material previously not available in the UK.

To be in with a chance of winning a copy of this wonderful book, just sign up for the #FolkloreThursday newsletter here! (Valid through November 2016)

Gramarye: The Journal of the Sussex Centre for Folklore, Fairy Tales and Fantasy, Issue 7

Jelena is a London-based Storyteller hailing from the Balkans and the author of Serbian Fairy Tales, a collection of 20 tales which she selected, translated, introduced and annotated for the English-speaking world. The book is part of a larger project supported by Arts Council England: Serbian Fairy Tales—Uncovering the hidden treasures of European folk Literature—which also involves live storytelling performances (for adult audiences) and storytelling workshops (for children and young people). Having completed a successful three-year tour of the project in UK and beyond, Jelena is currently writing a new book (expected publication date: Spring 2018).