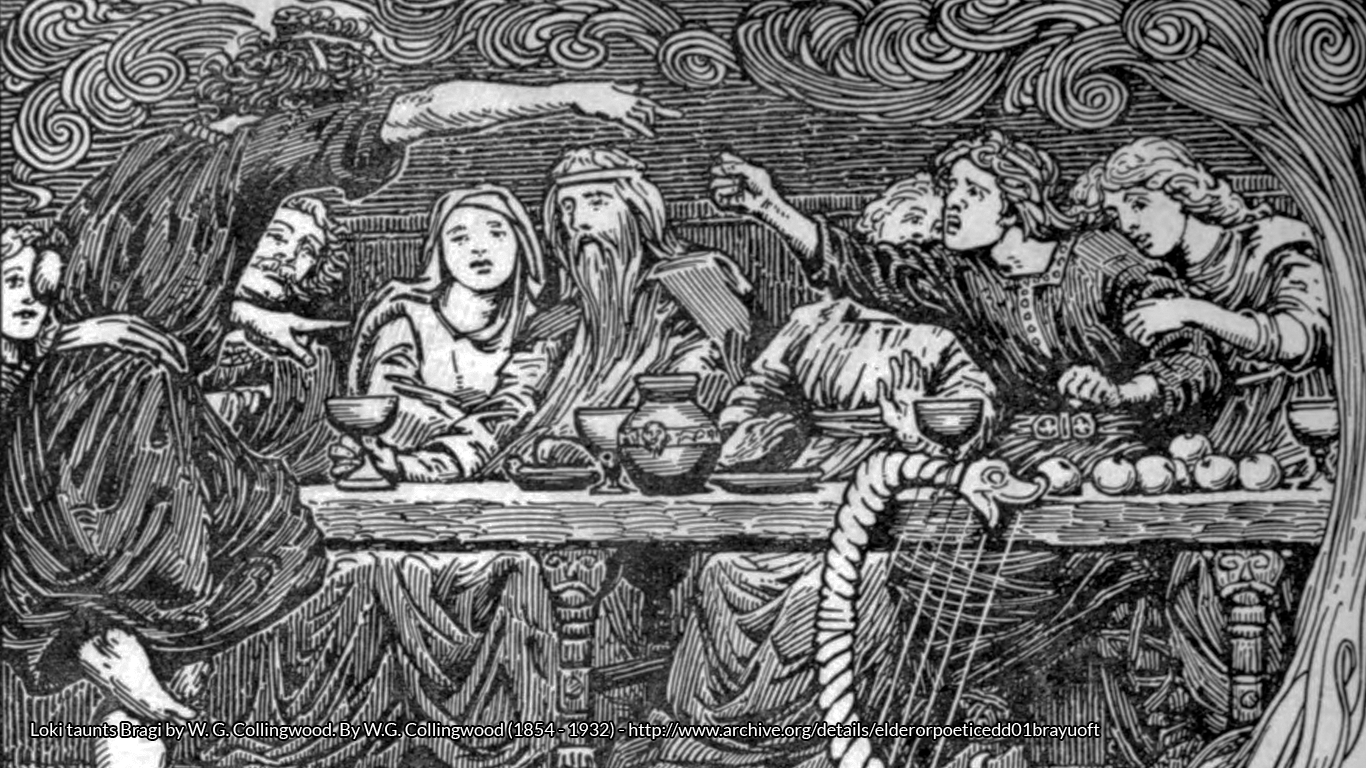 It’s safe to say the Norse gods, and the Vikings with whom they’re so strongly associated, have a fairly militaristic reputation. So you may be surprised to learn one of the main tactics the Norse gods employed in their struggles, aside from outright trickery and brute force, was trading verbal insults. Often rhyming verbal insults.

These battles were called flyting, and they’re a well-established part of medieval English and Scottish society. One especially memorable example of flyting is the 16th century exchange between William Dunbar and Walter Kennedy, performed for the court of Scottish King James IV, where Kennedy calls Dunbar, “a sh*t without a wit.” (That insult stands the test of time pretty darn well, if you ask me.)

But the history of flyting goes back farther than the 16th century. According to the Poetic Edda, one of the very few surviving texts with myths about the Norse gods, flyting began with the gods.

It’s not especially surprising that the Norse trickster god, Loki, features prominently in the Edda’s most famous example of flyting: the Lokasenna. In this poem, Loki shows up at a feast, kills a servant, and tops off the evening by insulting just about everyone; the men have their courage called into question, and the woman are accused of promiscuity.

In other words, Loki totally lays the smack down, only leaving after Thor repeatedly threatens to behead him.

Well, in the Poetic Edda, the gods respond to this litany of insults by tracking Loki across the Nine Realms, butchering his son Nari, and then binding him beneath the earth using the entrails of his child.

Just to make the whole situation a bit more uncomfortable, the gods place a serpent above Loki’s head to drip venom on his face. Loki’s wife Sigyn remains in the cave, catching the poison in a bowl. But when she empties the bowl, the poison drips in Loki’s face and he thrashes against his bonds, causing earthquakes.

Spoken words can have dire consequences. Especially when you insult the gods.

But flyting is not the sole realm of the trickster god. In the Hárbarðsljóð, another poem in the Edda, Thor engages in flyting with the ferryman Harbard, who is widely accepted as Odin in disguise. In this battle of wits, Odin brags about his success seducing married ladies, insults Thor’s clothes, calls Thor a coward who was “afraid to fart or sneeze,” and accuses Thor’s wife Sif of having another lover on the side.

The existence of flyting, and its role in Loki’s imprisonment, suggests these verbal insult wars played a role in Viking society. Perhaps verbal acuity and the ability to spin a sick rhyme meant as much as the ability to swing a sword or bash some skulls.

And of course, the tradition of cleverly insulting your rivals didn’t die out with the Vikings.

In Translation From The Flyting of Dunbar and Kennedy. William Dunbar. Trans. Kent Leatham. November 2016. Retrieved from: http://intranslation.brooklynrail.org/middle-scots/the-flyting-of-dunbar-and-kennedy

Born and raised in Colorado, Samantha MacLeod has lived in every time zone in the US, as well as London. She has a bachelor’s degree from Colby College and an M.A. from the University of Chicago. Samantha lives with her husband and two small children in the woods of southern Maine. When she’s not shoveling snow or writing contemporary romance novels featuring Norse gods, Samantha can be found teaching college composition and philosophy to undergraduates. Visit Samantha's website here.