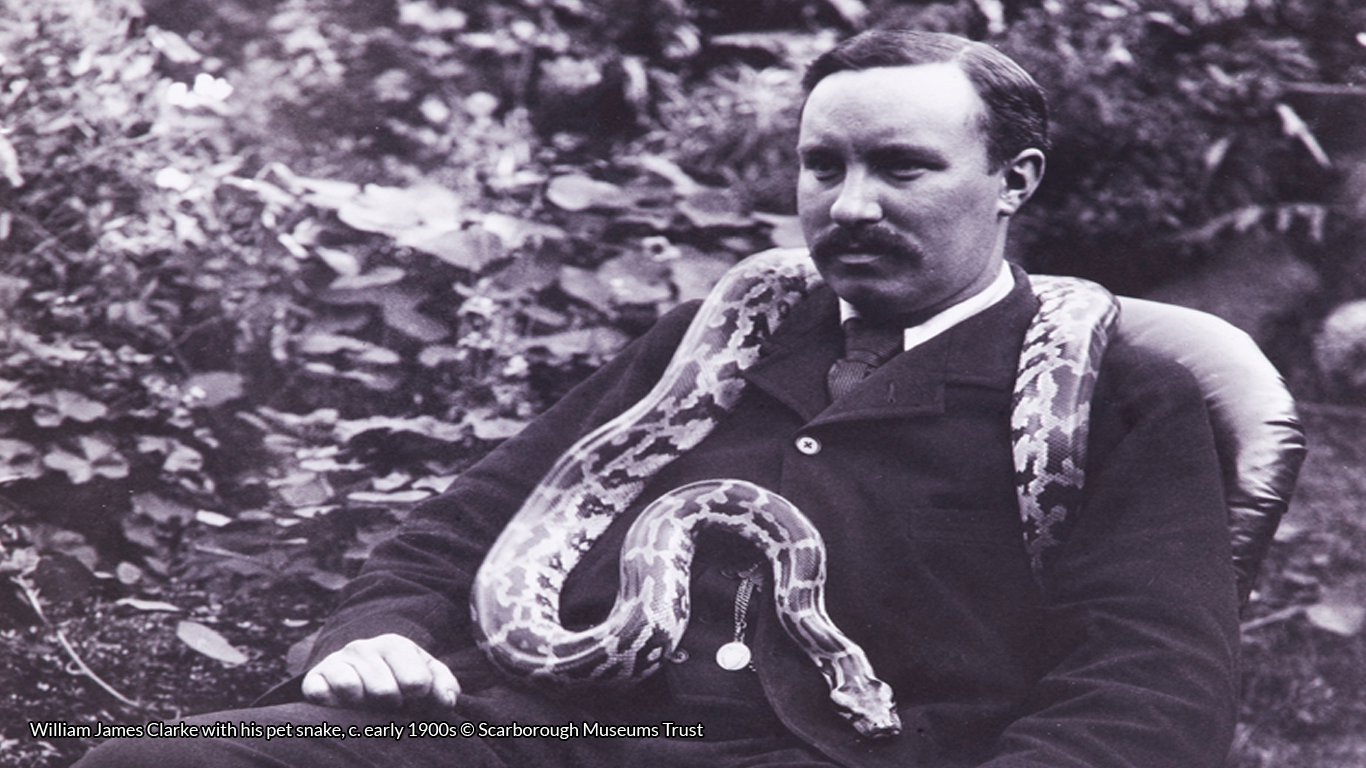 The Clarke charm collection is one of the most intriguing held within the Scarborough Collections, due to the breadth of material represented and the insight it offers into past people’s lives based on their belief systems, fears, and hopes. It is comprised of around 500 pieces from across the globe collected by Clarke for more than 50 years, from 1891 until his death in 1945. It was donated to the Scarborough Borough Council museum collection by a member of his family in 1946.

William James Clarke (1868-1945) was a local lad, born in Scarborough. He developed an interest in the natural world from a young age, giving his first lecture on reptiles aged 15 at the Grand Hotel in 1883, and becoming a founder member of the Scarborough Field Naturalists when he left school. William first acted as the group’s President at the tender age of 23 years old, and remained an active committee member until 1943. He was a keen wildlife photographer, and also kept several snakes as pets. After beginning working life as an apprentice printer, Clarke soon abandoned that career path and opened his own shop at 44 Huntriss Row selling fishing tackle, natural history specimens, and taxidermy, some examples of which are also held within the Scarborough Collections.

This interest in nature most likely led to Clarke’s subsequent fascination with folklore, due to its frequent borrowing of material from the natural world. In particular, the use of animals and organic matter in the creation of charms. He kept notebooks recording numerous examples of folkloric tradition throughout Britain, noting down observations including excerpts from newspapers and examples from folklore publications.

Clarke’s charm collection reveals a range of uses, including cures for sore throats and toothache, the protection of seafarers from drowning, good luck charms, and those designed to ward off evil spirits and bewitchments. It is the latter that will form the focus of this article, together with accounts recorded by Clarke in his notebooks of reported cases of witchcraft in North Yorkshire from as late as the early 20th century.

Some accounts of local witches are rather shocking, not simply due to the treatment of the women involved nor the supposed practices in which they were thought to be engaged, but that such behaviour and superstition survived until relatively recently. The Scarborough Evening News of 6th April 1932 reported the existence of a plaque (the precise location is not given) stating “here lie the remains of I’Eregah, who was burnt as a Witch at Fishtown, 9th March, 1884.” Yorkshire Antiquarian and Folklore Society member A. R. Wright, writing in the early 20th century, believed that witches still survived in rural areas and that local people would certainly be aware of women to approach for advice and spells. However, such women also fell under suspicion of harbouring evil intentions. For example, Nanny Jones of Hunmanby Road, Filey, who was accused of bewitching a neighbouring farmer’s pigs. Clarke records an account given by Reverend George Shaw in 1878 that the following action was taken:

“One day more than twenty men went to her house, each carrying a horse shoe in his pocket, they seized her, tying her hands and feet together and carried her down to the sands, where they put her in a boat and pulled her out to sea. Here they put her overboard but she would not sink so they took her again, brought her on shore and went and got the Church Bible.”

They then proceeded to weigh Nanny Jones against the Bible in a scale, which was considered to be a fail-proof test. As she weighed more than the Good Book she was allowed to return home. This seems rather shocking to our modern sensibilities, and strangely reminiscent of a scene from Monty Python and the Holy Grail, and it also seems that men with similar skills were not treated in the same manner. The reported Wise Man of Scarborough was well-respected for his knowledge of medicinal herbs, ability to restore health, and recover lost property. People would seek his advice from as far afield as Staithes and Goathland, which are both over 20 miles away. An account from 1820 records that the bellman of Staithes informed locals:

“Stolen yesterday afternoon, a large fishing net, belonging to Jock; if it is not brought back before one o’clock tomorrow, he will inform the Wise Man of Scarborough.”

The superstitions surrounding witchcraft appear to have been prevalent among fishing communities, such as those along the North Yorkshire coast. Jane Nicholson of Scarborough was so well-known and feared that if a seaman met her on his way to the harbour, he would refuse to sail that day. The first herring caught was carried below decks and placed on the fire while still alive to break any spells cast against the boat. The second herring was stuffed with pins while still alive and left to die to punish the witch through pain transference. Fisher women would never throw eggshells out, as they believed that witches might use them to sail out to sea and wreck the vessels of their menfolk. When Betty Creaser of Flamborough died her house was found to be hung with eggs, an apparent sign of her guilt.

Clarke’s charms demonstrate the variety of ways in which people chose to protect themselves from evil spirits and witchcraft with malicious intent. The power of three is a recurring theme among the charms; the notion that the energy conveyed by a person is returned to them threefold. Clarke collected a securely corked witch bottle containing nine pins, nine nails, and nine needles which would further strengthen the power of any rebounding spells. This would be buried near a supposed witch’s dwelling, or heated until she was forced to reveal herself. Once identified, any spells cast could be broken by cutting the witch above her mouth and drawing blood. Such bottles were also taken to sea by sailors to protect them against storms and drowning, or given to their sweethearts back on land to keep them safe. The latter was practiced in Scarborough until the 1920s.

Many accusations made against alleged witches were concerned with the ‘overlooking’ of animals, causing them to fall ill or die. One solution was to stuff animal hearts with pins, in an attempt to counteract the suspected spell and prevent it from affecting an animal or human. Once again nine pins were employed, all openings in a dwelling secured, and at midnight the heart was heated. Those present remained silent for an hour, with salt thrown into the fire at intervals and incantations uttered as the flames burned green. The witch would simultaneously heat and plead to be let in. Once revealed, the heating would transfer the ailment to her and the roasting could continue indefinitely by hanging the heart within the chimney as an extra precaution. There are several examples within the Clarke collection representing a pigeon, a seagull, a pig, and a sheep.

Another means of protection was rowan, also known in Yorkshire as ‘witch wood.’ It was said to have spiritual properties. It was believed that if a witch was touched with rowan by a Christian man, she would be carried off by the Devil. It had to be cut with a household knife, from a tree not previously known to the cutter, and taken home by a different route. The presence of the tree’s red berries or the use of red thread was considered to be lucky and increased its power. Rowan was employed in a variety of ways: as a necklet for livestock; formed into a cross tied, with red thread, and hung above doorways to prevent a witch from entering; placed within the lining of garments; to stir cream and encourage butter as a means to counteract any negative spells; in the construction of stocks and for ship’s masts. It was the custom in Bempton to carry a piece of forked Rowan in the pocket, Wolds Waggoners would not leave home without a rowan whipstock, and a Whitby joiner’s shop reportedly still used rowan for protection as late as 1938.

There were several other items people chose to hang in their homes for protection. Hag stones were commonly used across England and Ireland, and had to be found with a natural perforation. They were hung in a doorway to prevent a witch from entering. Miss Allanson of Cloughton claimed that a hag stone in her possession had belonged to her family for 2000 years. Could it be that some of these stones with a ‘natural’ perforation were in fact prehistoric tools, but a lack of understanding of their original purpose led to their re-appropriation as charms? Accounts dating from around 1850 record the use of witch cakes in Buckton, Bempton, Speeton, and Flamborough. Such cakes were circular in shape with a central hole and a double row of six projections. They had to be baked between 1st and 6th April, with a new cake made each year and the old one thrown away. The cakes were suspended through the hole behind the main entrance, but no ceremony accompanied the hanging of the new or the disposal of the old. We now commonly associate horseshoes as charms for good luck, but their original purpose has been diluted over time. Their earliest use as charms hung at the threshold of dwellings in Britain dates back to late 16th century Scotland. It was believed that the Evil Eye, or the act of ‘overlooking,’ had no power over implements made from iron or steel. It was also believed that a found horseshoe possessed even more potent properties, especially if it had nails still attached. Those purchased were useless as charms. They were fixed above entranceways as protection, and sometimes in triplicate to invoke the power of three.

This article has only scratched the surface of Clarke’s extensive and diverse charm collection, and covered a mere fraction of the charms designed to protect against witchcraft and evil spirits. The collection certainly warrants further in-depth study and discussion. The Clarke Charm Collection is part of the Scarborough Collections, owned by Scarborough Borough Council and cared for by Scarborough Museums Trust. For further information, please contact Collections Manager, Jennifer Dunne: jennifer.dunne@smtrust.uk.com.

Jennifer Dunne received a BA Hons in Archaeology and History from the University of York and an MA in Museum Studies from the University of Leicester. She has worked in the museum sector for thirteen years caring for and curating mainly social and local history collections, but now manages the multi-disciplinary Scarborough Collections which range from art, social/local history and decorative art to archaeology, natural history, and geology. Jennifer developed a particular interest in folklore during her time with the North Lincolnshire Museum Service where she conducted research into the noted folklorist Ethel Rudkin, the Peacock family of Bottesford, the Isle of Axholme’s Haxey Hood festival, Plough Jags, North Lincolnshire dialect, and the local folk songs collected by Percy Grainger. This interest has been furthered in her current role as Collections Manager for the Scarborough Museums Trust through working with the William James Clarke charm collection. For more information about Jennifer’s work, you can visit the Scarborough Museum’s Trust website and follow her on Twitter at @SMT_Collections and @SMTrust.