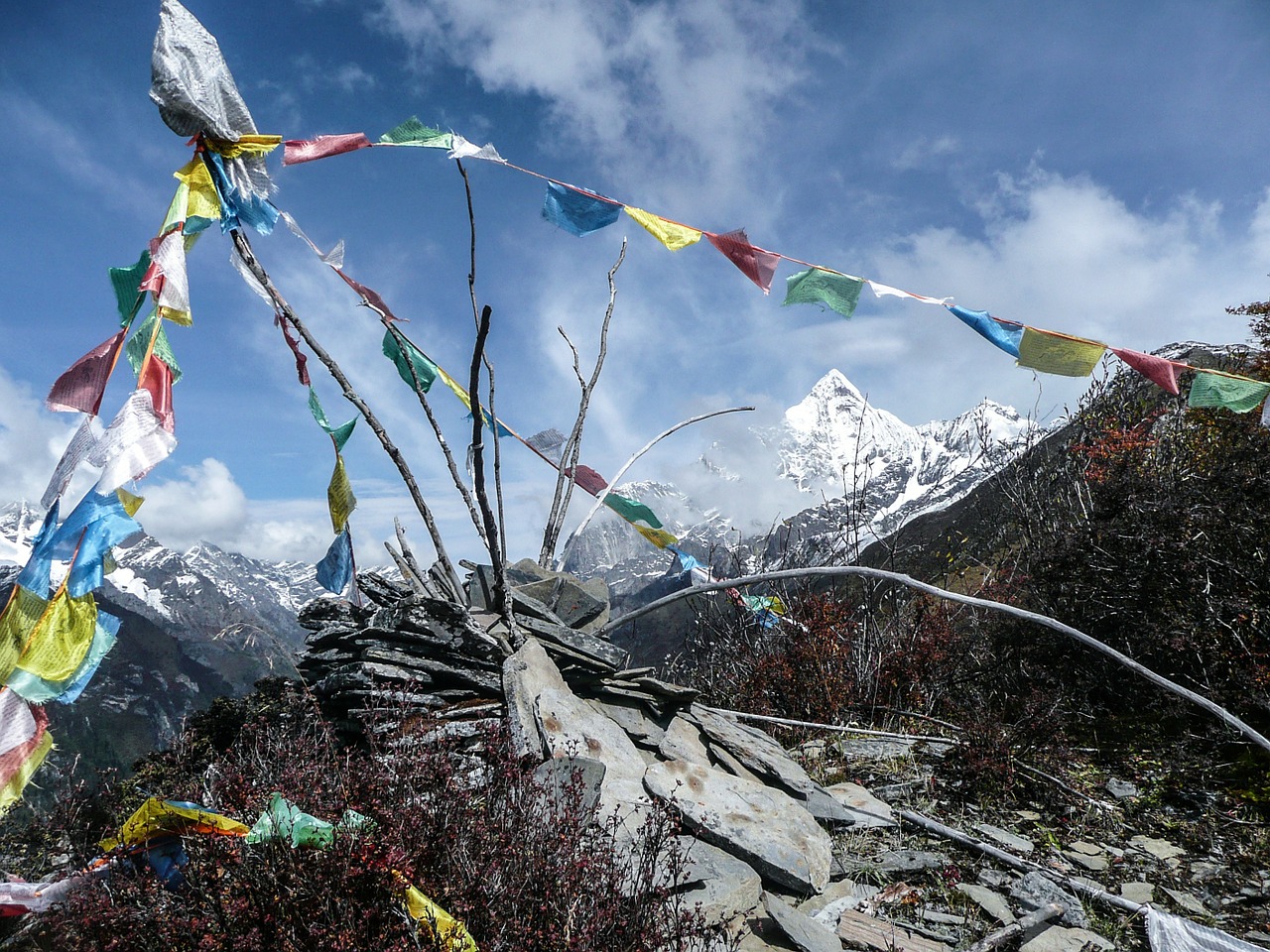 Zombies, it would appear, are very much in fashion.  Television programmes such as The Walking Dead and associated films have placed them directly in the public consciousness.  In the main, such beings tend to inhabit certain areas of America or some Caribbean location and we have William Seabrook’s book on Haiti, The Magic Isle to thank for that. But the idea of zombies is of course, far wider.  From the Irish marbh-bheo to the Scandinavian draugr or the Portuguese-Brazilian corpo-seco, the walking dead man features in the folklore of many cultures, nearly always with an antipathy towards the living.  One of the countries however, with which one doesn’t associate the zombie, is Tibet.

Although often associated with mysticism and magic Tibet may appear somewhat aloof from the attentions of the walking dead.  This however, is not the case.  In certain places in the remote Himalayas, zombies proliferate.  They are just as dangerous as those found elsewhere and villagers are often forced to take precautions against them.

Though there are various types of the wandering dead in Tibet, both in physical and spiritual form, the main one is known as the ro-lang.  This literally means “a risen corpse” and signifies a body which has somehow returned from the dead.  There are generally speaking, two ways in which a body can be raised up as a ro-lang.  The first is through a specific set of rituals performed by a dugpa (dark sorcerer or witch).  This will cause the ro-lang to be controlled by the person who has raised it and will be subject to any command issued by that person — but by that person only.  Such creatures are raised for the purposes of the sorcerer involved and this is usually done for evil purposes, such as spreading disease within a community. The second method of creating a ro-lang is through possession by a gdon or harmful spirit.  This can happen sporadically and the gdon spirit usually enters the body before it is interred and takes control of the body after death.  The subject must have led an “unclean life” or have broken a solemn promise or vow and this allows the gdon to enter and reanimate the body upon death.

Ro-langs cannot speak and their bodies are extremely stiff.  This means that they cannot bend over at the waist, so many doors in Tibetan houses are quite low to prevent them from entering a house during the night.  It moves about very slowly and stiffly – the arms stretched out in front of the body – perhaps very much in the style of a cinematic zombie.  Indeed, the Tibetan zombie is closer to what we envisage a zombie to be than its Caribbean counterpart.  One of the ro-lang’s weaknesses is its tongue which protrudes as it walks.  The tongue is black in colour and is often considered to be the very soul of the ro-lang.  Therefore, to cut off the protruding tongue will reduce the creature to a fine dust – although in some forms of Tibetan Tantric Buddhism it is said that it turns into a golden statue which then disappears.  However, whoever decides to cut the tongue must be careful because if the ro-lang touches him or her on the head, a highly infectious disease is immediately passed on.  This is a similar notion to that of a vampire as an agent of the spread of disease.

Ro-langs have no physical feeling and are therefore not subject to extremes of heat and cold.  Thus ro-langs can traverse the high snow-filled passes of the Himalayas without much trouble, impervious to frostbite or other similar conditions.  Similarly, they cannot be driven away by opponents bearing burning torches, nor can they be burned to ashes as can many of the Undead.  Although they are practically invulnerable to pain they have certain points on their bodies which are weak (see below) and which can ultimately be used to destroy them.

So, how can a ro-lang be destroyed?  First, we must bear in mind that the creature cannot be killed since it is already dead, but it can be made to “fall over” which is tantamount to destroying it.  It is possible to do this if one knows what sort of creature one is dealing with.  Apart from cutting off the end of its tongue, which is a dangerous exercise since the creature may touch the head, there are a number of ways.

If the ro-lang is possessed by a gdon, then it can only be destroyed by a trained exorcist using an elaborate ritual.   However, if the ro-lang has been raised by sorcery then it will almost certainly have several weaknesses.  The ro-lang usually exist in five categories each signalling a deficiency which it possesses. These are:

Each description denotes a weakness of the particular ro-lang.  A mole ro-lang has a blemish on its body where it is most vulnerable and if it is struck there, it will perish.  However, the location of the mole or blemish is often difficult to locate, making this the most formidable of all the ro-langs.  A skin ro-lang is relatively easily to defeat as one must simply break the skin, whereas a flesh ro-lang must be deeply cut with a sharp instrument.  A blood ro-lang of course, must bleed whilst the bone ro-lang must have a bone broken to “fall over” and be destroyed.

There are many folk stories concerning the ro-lang, many of which equate them with ghosts. For example, it is known that they are close by when there are strange noises within a house, and when pots and crockery inexplicably break.  This forms the basis of many Tibetan zombie stories.  Such stories usually end with the “falling down” or destruction of the ro-lang.  A typical story runs thus:

“A lama was brought down from a remote monastery in Tibet, together with a trapa (novice), to officiate in the house of a dead man in a nearby village.  They were required to stay with the body, performing the rites of the dead, until the time came to remove it for burial.  It was known that the man in question had not lived a good life, so the rites had to be performed repeatedly.  The lama and the trapa had to sleep in the same room where the body was kept tied up in a sitting position against a wall, and covered in scarves and bandages.   The sombre repetition of the funereal chants soon took its toll on the two men and they fell into a sound sleep.  During the night, the earthen pots from which they had eaten began to move about of their own accord raising a clatter which brought a neighbour from another room in the house to see what was going on.  Both holy men continued to sleep soundly, worn out by their exertions.  Just then the neighbour saw the corpse in the corner move, and with a noise like ripping cloth, it began to tear at the bandages that bound it.  He saw the protruding tongue and he knew that the corpse was now a ro-lang.  He turned and fled and as he did so he saw the corpse begin to creep across the floor towards the sleeping men.  It moved like a dog on all fours.  The neighbour fled the room hearing the screams of the men as the ro-lang attacked them.   In the morning, both men were dead, and the corpse was back in its position against the wall.  All the clay pots and drinking bowls in the room were smashed and the bandages and scarves around body were torn and scattered about.”

Variations of the above story are common throughout Tibet, Sikkim and Bhutan and are widely believed by the populace there.

In some cases, the ro-lang can leave its deathplace and wander about on the mountains leading travellers astray and perhaps to their doom in deep snowdrifts.  Some are simply said to vanish without any trace.  Occasionally, one may make its presence known by a series of unexplained rappings in the house to remind humans that although it’s not seen, it is still there.  If this happens, a simple chant – ‘Om Mani Padme Hum’ – may be sufficient to drive the evil away.  But perhaps it is as well to have the house ritually cleansed.

Although the ro-lang has sometimes been compared to the Haitian/Caribbean zombie, with which it seems to share many characteristics, it is a rather more complicated being.  It is certainly deserving of much more study.

Dr. Bob Curran was born and raised in a remote mountain area of County Down in Northern Ireland. Leaving school at 14, he worked in a number of jobs including lorry driver, professional musician, journalist, and even as a scripter of comics. He travelled extensively in many countries before returning home to settle down and work in the Civil Service. Later, he went to University where he obtained degrees in education, history and educational psychology, whereupon graduating as a teacher. Although he still teaches, much of his work is now regarding community development within Northern Ireland, in this capacity, he acts as a consultant to a number of cultural bodies within the province. He he deals with cross-border matters with the Irish Republic, working for the Office of the First and Deputy First Minister of Northern Ireland. Sitting on a number of cultural communities, Curran has also worked directly as a governmental advisor and as a consultant to several bodies which have been set up by other governments. He also acts as a consultant to a number of tourism companies, giving lectures and conducting tours on many topics of local and national Irish history. As a writer, Curran has been extremely prolific and has approximately 38 books to his name mainly on the subjects of history and culture. In addition, he has a number of works published in other languages including Japanese, Italian, French, Portuguese (Brazil), Spanish (Spain and Mexico), German, Urdu and Latvian. He has also served as a contributor and and consultant to various radio and television programs both for private companies and national networks. Married and with a young family, Curran continues to live in Northern Ireland on picturesque North Derry coast, not far from the celebrated Giant's Causeway. Visit his website here.