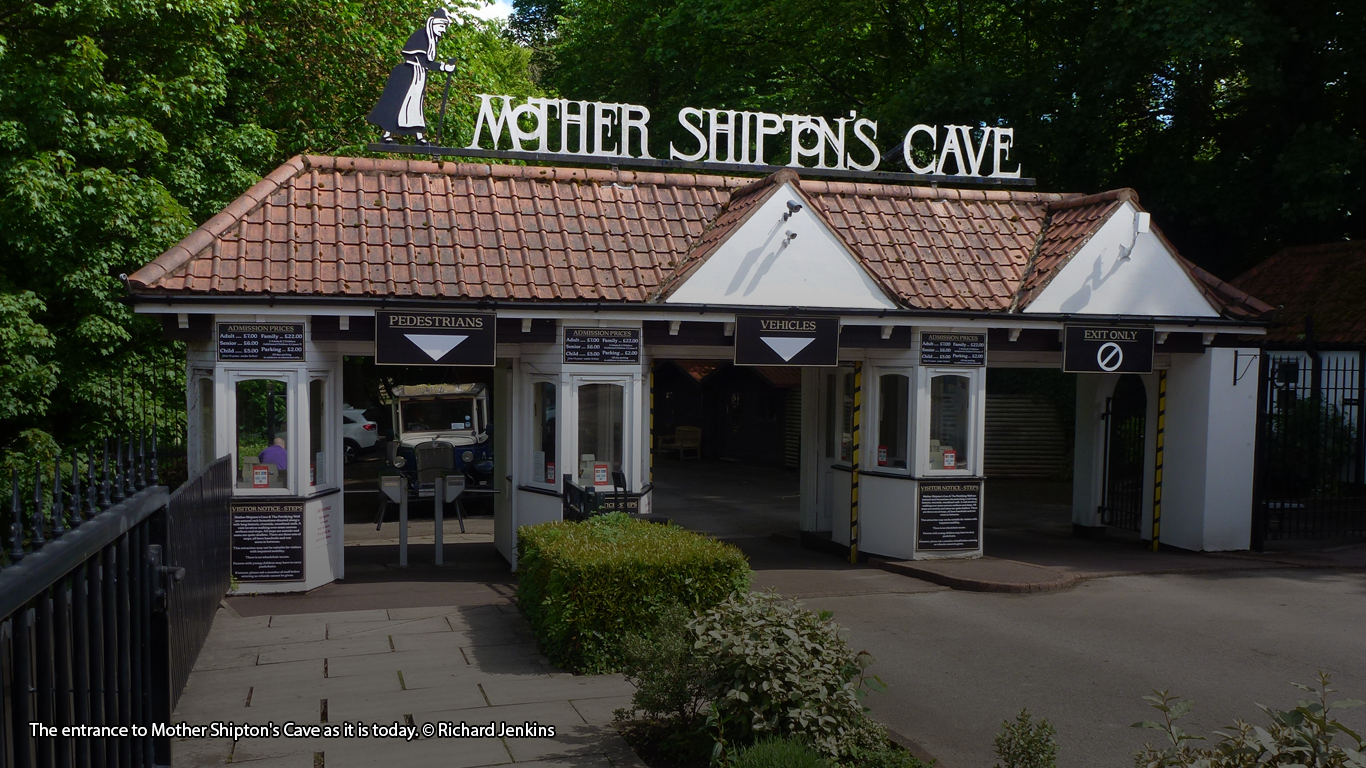 The story of Mother Shipton, as well being a window on the past, is a mirror in which modern capitalism is reflected. It looks like one of the more solid of English legends: she has approximate dates; she is claimed by a definite place, Knaresborough; and she even has her own tourist attraction, in Mother Shipton’s Cave. But the closer we get, the more elusive she becomes. After picking over her bones, it turns out that the really interesting story is about the creation and promotion of folklore in the service of money-making and the marketplace. A tale that may be more common than we think…

At Junction 47 on the A1(M) in Yorkshire, brown tourist signs point west to Mother Shipton’s Cave, Knaresborough. There you’ll find a delightful riverside walk, the Dropping Well, which petrifies anything suspended in it, a wishing well, the cave in which Mother Shipton is said to have been born, a gift shop selling witchy merchandise and bottles of wishing-well water, and a venue for pagan weddings. Oh yes, and a good pub to relax in when you’re finished.

According to the attraction’s website, the prophetess of Knaresborough was born Ursula Sontheil in 1488, during a thunderstorm, in the cave that visitors can still see today. She was–and is–the most celebrated of English soothsayers, famous for predicting the fates of monarchs, the defeat of the Spanish Armada, the Great Fire of London, and the coming of iron ships. Ursula, who was apparently also a traditional healer, died in 1561.

While the website is circumspect about the historical accuracy of all these details, it permits of no doubt that Mother Shipton was a real and remarkable local celebrity, still worth celebrating and remembering: in Knaresborough market square a statue of Mother Shipton was erected in 2017.

She endures in cyberspace, too. All manner of new age and pagan, eccentric Christian, and idiosyncratically bonkers websites and postings claim Mother Shipton for their own. They, too, largely take her historical reality for granted.

But what does the historical record tell us? She first appears in 1641 in a chapbook about York during the reign of Henry VIII, an era bubbling with political prophecy. Published in London by Richard Lownds, in a climate of religious ferment, public anxiety and political tension that was soon to erupt into the Civil Wars, it featured Shipton’s prognostications about Cardinal Wolsey, the Scottish wars, and the destruction of London. Over the next quarter century at least eleven variations on these themes appeared, including one by the astrologer William Lilley in 1644, and one in Dutch. Mother Shipton was a successful publishing phenomenon.

She was, however, a shadowy creature until Richard Head provided her with a back story (in 1667, perhaps 1677): her mother, Agatha, was seduced by the Devil in the guise of a fair young man, and Ursula Shipton was born ugly in Knaresborough, near the Dropping Well. Head printed an expanded collection of prophecies, too, although Cardinal Wolsey had been dropped. By 1686, she had become Ursula Soothtell, and acquired dates for her birth and death.

Various editions of the competing Lownds and Head versions appeared up until the end of the 17th century, after which the prophecies gradually seemed to lose their attraction for the public. But by then, however, Mother Shipton had taken on new life as a character on the stage. Throughout the 18th century, and later, she was a stalwart of Christmas shows and pantomimes, often chortling jingoistic patriotic sentiments. Played by a man, she was among the earliest English pantomime dames.

She also popped up elsewhere. In 1792 an effigy of the good woman was on display in Rackstow’s Museum, Fleet Street, London, along with what was claimed to be her skull, brought from her grave in Knaresborough. And in Mrs Salmon’s Waxworks, also in Fleet Street, Mother Shipton used to kick passing visitors. At least one school of thought suggests that, with her hooked nose and chin, she was the prototype for Mr Punch.

With the emergence of Revolutionary, and then Napoleonic, France as a threatening enemy, anxious British public interest in the prophecies burgeoned again. Between 1797 and the very early 1800s at least eight editions of Mother Shipton appeared, prophecies suitably brought up to date. Versions continued to be published throughout the 19th century: between 1820 and 1881, there were at least seventeen. In addition, the Shipton brand began to grace fortune-telling books, in a new publishing trend.

In 1862, Charles Hindley, from Brighton, published the The Life, Prophecies and Death of the Famous Mother Shipton, claiming it to be a reprint of Richard Head’s 1687 edition. Now the prophetess apparently foresaw the internal combustion engine, the London Underground, the telegraph, flying machines and a host of other stuff; not least the end of the world in 1881. Hindley admitted his fraud in 1873, although this did not inhibit him, and others, from continuing to publish these ‘prophecies’ right up until the purported doomsday.

Hindley’s confession was forced by public criticism, but Mother Shipton had been on the receiving end of rationalist scepticism for a while, beginning in 1841, with Mackay’s Extraordinary Popular Delusions. A future as a figure of fun, at best, seemed likely. This was not quite to be, however; a further career change beckoned.

The final chapter in the tale of Mother Shipton is largely the story of the development of the brand first by the Dropping Well Estate, and then Mother Shipton’s Cave, by a succession of owners. Knaresborough’s primary attractions for visitors, since the late 1600s, were the Dropping Well and the promenade along the River Nidd. Although occasional tourist guides had mentioned Mother Shipton, it was only with the 20th century that she achieved ever greater prominence in the marketing of what is claimed to be ‘England’s Oldest Attraction’.

Today, her legend has become the overarching theme of the park. During this process her identity and image have evolved to the current complicated mixture of the jolly old prophetess and the hag-like witch, and the legend to a nod-and-a-wink ‘well it must be true (some of it…)’. And the Cave’s version of the legend has become the basic contemporary narrative.

We are left with two, closely related, questions. First, was the legend of Mother Shipton originally an oral tradition, rather than a money-spinner dreamed up by the 17th-century pulp press? By way of context, prophecies had a huge market in the turbulent 17th century. As well as Mother Shipton, prophets such as Merlin and Cheshire’s Robert Nixon were avidly read. There is also good evidence that, between the 17th and 19th centuries, significant numbers of people believed their prophecies. So, regardless of how her career began, Mother Shipton passed into the vernacular. This doesn’t, however, answer the question of whether she was a ‘folk legend’ before she was taken up in print.

Which brings me to the second question: was Mother Shipton, Ursula Whatever-her-surname-was, a real person? Without contemporary documentary evidence, we have no way of knowing. It doesn’t matter, anyway. Starting at 1641 gives us a sufficiently interesting story to unpick. A story about the complex relationship between print and oral tradition, and–long before the days of fakelore, urban legendry, fake news and the Internet–a tale of the shaping of folklore by commercial interests.

The legends of Mother Shipton are no less authentic or significant because we cannot trace them back to oral tradition. It is sufficiently interesting to trace their forward progress after 1641, as the locally-situated but nationally-focused legends that appeared in the original cluster of chapbooks gradually evolved in a variety of contexts and media. Keeping an eye on where the legend goes next is more than enough to keep a folklorist busy.

Tim Thornton 2006, Prophecy, Politics and the People in Early Modern England, The Boydell Press. This is the best account of the history of the Mother Shipton legend.

Richard Jenkins is Emeritus Professor of Sociology at the University of Sheffield, and Hon. Treasurer of The Folklore Society. He won the Katharine Briggs Award in 2015 for his book, Black Magic and Bogey Men.