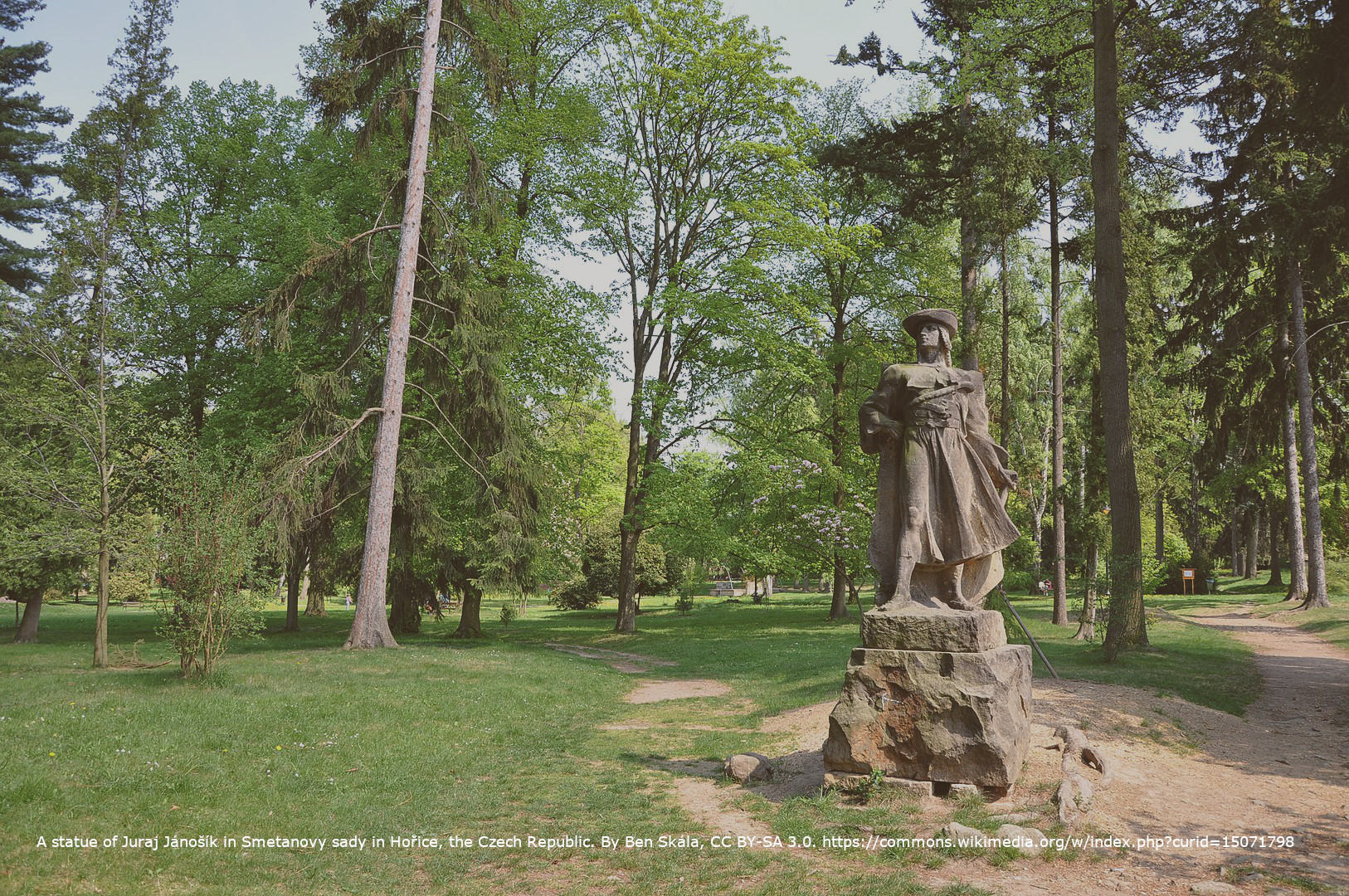 Jánošík, the outlaw who supposedly robbed the rich and gave to the poor and who has inspired countless artistic works, was once an ordinary man.

There are very few sources about Juraj Jánošík’s life. One of them is the protocol from Jánošík’s trial in March 1713 when he was sentenced to death, other are the two documents from the archives in Trenčín, and lastly, there is the registry office of the parish in Varín.

Thanks to this registry office, we know the exact date of Jánošík’s christening, which was on January 25, 1688. Based on this information, we can say that Jánošík was born a few days earlier in the Terchová village near Žilina in northern Slovakia. We know almost nothing about his childhood and adolescence, but when he celebrated his eighteenth birthday, there was a change in his life. At that time, Slovakia was part of Kingdom of Hungary with influences from the Austrians, and the situation was rather turbulent because of the Habsburgs, Hungary, and their constant disputes. The Slovak people did not do well, they were plagued by poverty and serf duty to the nobility. The dissatisfaction escalated with the formation of a rebellious army led by Francis II Rákóczi. Jánošík was one of the recruited, and he spent two years with this army. His service ended with the battle of Trenčín when the Habsburg imperial army suppressed the rebellion and regained dominance over the Slovak territory. Jánošík survived the fight and returned to his native village, but not for long. After a short time, he joined, probably against his will, the Austrian army, and was placed in the prison service at the Bytča Castle, where he met Tomáš Uhorčík. Uhorčík was a leader of a band of robbers whose territory was in western and northern Slovakia, but also in Poland and Moravia. Jánošík and Uhorčík became fast friends based on their shared political ideals. Jánošík joined Uhorčík’s band of robbers, but shortly after Uhorčík got married, and the gang needed a new leader. Jánošík was the obvious choice. Everything we know about Jánošík’s robbery is based on his confession, which he made during his trial in Liptovský Mikuláš in March 1713, and on Tomáš Uhorčík’s confession.

The band of robbers had around twenty members from Slovakia, Poland, and Moravia. They robbed especially wealthy merchants, and they split the loot mostly among themselves, but they also gave some of it to the peasants in exchange for other things or services. According to some historians, Jánošík’s intent wasn’t just to enrich himself, his political ideals and the miserable condition of the region was also the driving force.

Jánošík’s career as a robber, however, didn’t last long, not even two whole years. He was caught in 1712 and was sentenced to death in 1713. Before his extremely cruel execution, he was tortured, and then he was hanged on a hook which went through his side.

It’s believed that for the 67 years since Jánošík’s death, stories about him spread only orally, as the first record of a song about him comes from the period around 1780. This song doesn’t seem to be of folk origin though, it was rather written to be performed in order to earn money for the artist. With a single exception, the first printed mention of Jánošík is from 1809, and it was the writers of the Slovak National Revival who turned Jánošík into the legendary hero.

Romanticism in Slovak and Czech lands was closely connected with Slovak National Revival and Czech National Revival. The two nations lived under the rule of the Kingdom of Hungary and the Austrian Empire—later the Austro-Hungarian empire—with Slovaks going through Hungarisation and Czechs through Germanisation. Both revival movements were to ensure that these two nations did not disappear, and language and cultural heritage were key in this.

At that time, folklore was the focus of many writers and scholars, and it was the Slovak romantic poet Ján Botto who completed the image of Jánošík as the brave young man who represents people’s desire for freedom and justice. In his famous poem, Smrť Jánošíkova (Death of Jánošík), Botto captures the last moments of Jánošík’s life. In this work, Jánošík meets rusalki and víly, the supernatural female beings from Slavic folklore, and at the end of the poem, he even marries their queen. With this ending, Botto expressed his belief in a better future where freedom is possible.

As with any other legendary hero or folklore in general, even Jánošík was misused and his story reshaped, in particular by the fascist regime in Slovakia during World War II and later by USSR when Czechoslovakia was its satellite state. This sadly happens everywhere, and no piece of folklore is safe from becoming a part of some extremist’s propaganda.

Nevertheless, Jánošík has inspired countless writers, musicians, artists, and other creative people from Slovakia, Poland, and the Czech Republic to come up with their retellings of his story. The newest Polish-Czech-Slovak historical film about him, Janosik: A True Story, was directed by Agnieszka Holland and her daughter Kasia Adamik.

Jánošík, a young outlaw with braided hair, carrying a shepherd’s axe called valaška, and wearing rural clothing, is the unlikely hero of Slovakia who is also popular in Poland and the Czech Republic. Throughout the last three hundred years, he has remained to be the symbol of the fight for freedom, and he continues to inspire people to create more, fight for justice, and not to lose hope in the face of adversity.

Petra Pavlíková is a writer and artist from the Czech Republic. She loves nature, especially forests, and has always been fascinated by mythology, folklore, and the human need to tell and listen to stories. She is the author of In the Dark Corner, I Stood Alone, a short story collection heavily inspired by folktales and fairy tales. Among other things, she's currently working on a low fantasy novel full of nature and Slavic folklore. Her art can be found at Redbubble and Society6 under the artist name shilohova. Visit her website here.