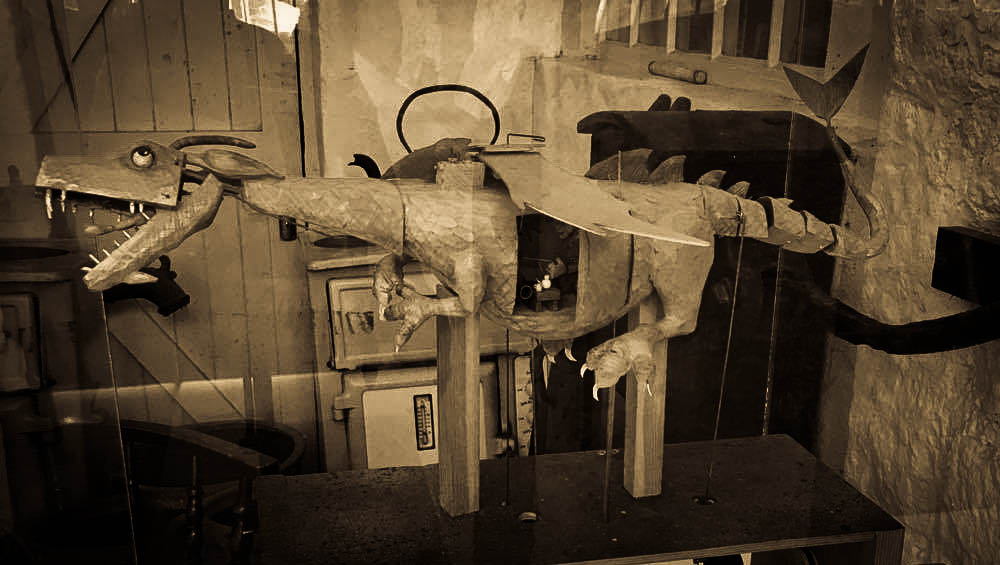 Helston Museum is a small museum in the heart of Cornwall, with collections reflecting both the social and industrial history of The Lizard Peninsula, from mining, fishing and farming through to home life in the 18th – 20th centuries. I’ve been asked to specifically talk about our curious number of dragons featured in the museum.

Through the museum, and quite by accident, Helston Museum has several dragons you will see as you walk through its galleries. Most of these are based on the legend of St Michael fighting the dragon/devil or St George fighting his dragon, in a typical good versus evil struggle.  The town emblem depicts this with St Michael standing proudly over the body of his slain foe, this is where our link to dragons originates.

Helston town is famed for Flora Day which takes place on the 8th of May (or the Saturday before if 8 May falls on a Sunday or Monday) which also happens to be the Feast of St. Michael. As well as the Furry Dance where dancers fill the streets dancing through shops & houses to celebrate the passing of winter and the arrival of spring; there is a mummer’s play called The Hal-an-Tow which hosts various historical and mythical themes, where once again we hear mention of dragons! Both Saint George and Saint Michael feature in the Hal-an-Tow song the lyrics talking of their great battles:

But for a greater than St. George
Our Helston has the right-O
St. Michael with his wings outspread
The archangel so bright-O
Who fought the fiend-O
Of all mankind the foe”

The dragon in the Hal-an-Tow is fought by his traditional opponent St George who slays him in great dramatic bravura and St Michael fights the Devil once again, being cheered on by the crowds. When you enter the museum it is an interpretation of this dragon from the Hal-an-Tow that you are greeted by, a bright orange dragon swooping down upon you, made by children at Saturday Art Club made from withy and tissue paper, children love it!

The second dragon you will find is this beautifully crafted representation of St Michael slaying the dragon, as depicted on Helston’s town crest made by local artist Julie Gleeson. This sits in what could be described as a cabinet of curiosities holding some of the most peculiar items in the museum, containing objects like a crocodile foot purse, cock-fighting spurs, miniature bibles, calendars on coins and a dice made of a lion’s tooth.

Next up is this beautiful automata made by renowned maker Carlos Zapata. The model works by inserting 20p where you can then see that the dragon is being controlled by a little man inside the belly of the dragon. A beautiful addition to our museum and once again another feature that children are both drawn to and mystified by how it works.

The final dragon you will find is Denzil, protector of the play kitchen within the museum. The naming of our children’s play area was run as a competition for local school children to name and theme it, the winner was Richard Nesbit who named “Denzil’s Den” a fictional friendly green dragon “who welcomes children to the museum”.

So there we have it, a brief but colourful guide to why and how Helston Museum has its many dragons. I hope you enjoyed reading about our curious collection of mythical creatures and that this will inspire you to come and visit the museum soon.

Helston Flora Day is not to be missed if you are interested in Cornish and folk traditions this year it is being held on Saturday the 7th of May so come along, “For summer is a-coming in, and winter is a-gone” (lyrics from the Hal-an-Tow song).

Rosie is the museum assistant at Helston Museum, running the social media & marketing for the museum as well as participating and learning other areas of museum work such as education, documentation and exhibitions. Visit the Helston Museum website.