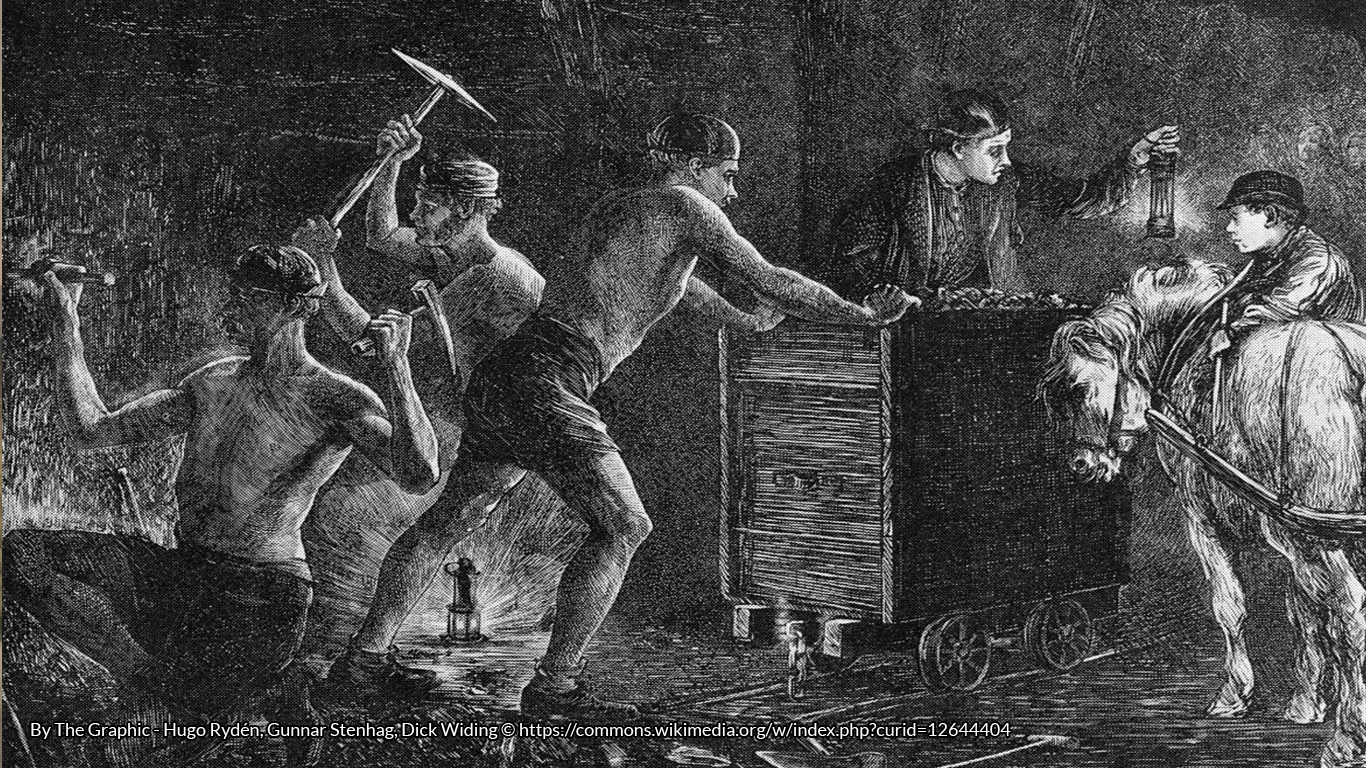 On 21st September, 1874, after hearing the cries of the ‘Seven Whistlers’ miners employed at collieries in Bedworth, North Warwickshire refused to descend into the coal pits. These “rushing, soughing” sounds had been heard in the vicinity the night before, and the miners, fearing them as an omen of impending disaster, chose to strike. (1) The story gained traction, enjoying largely regional but also national interest in the press. Reports frequently used the supernatural, folklore-related elements of the strike in order to make derisive comments about the ‘superstitious’ beliefs of colliers, and the purported nefarious character of the working-class in general. (2) This article examines folklore surrounding the Seven Whistlers, exploring the phenomenon’s many physical and narrative mutations. Within the context of the events at Bedworth, it takes a look at how the Whistlers functioned as a tool for miners to express concerns about the hazardous nature of their work, in turn affecting how they were perceived by those outside their community.

In 1853, the Leicester Chronicle offered the following dramatic origin story for the Seven Whistlers, reporting that miners would refuse to work after hearing the sounds:

“Seven colliers were once intoxicated on a Sunday, and towards night they proposed to whistle for a wager…they were all carried up into the clouds by a whirlwind…at the return of darkness, their fearful employment is to fly from place to place, where fatal accidents are impending, to warn, in premonitory strains of dismal melody, their survivors, to avoid their own terrific and never-dying destiny, as The Seven Whistlers.” (3)

The Chronicle details a contemporary belief among colliers that the cries of the Seven Whistlers would herald the impending death of a miner, describing the sounds in fantastic terms:

“strange, mysterious sounds are heard in the air at night, sometimes like the distant singing of a flock of birds, and at other times resembling the smothered wailings of children chanting a funeral dirge.”

Many stories surrounding the identity and origins of the Seven Whistlers contain supernatural and religious associations. In March 1886, Thomas Ratcliffe wrote to the Notes and Queries journal describing the Seven Whistlers as “peculiar whistlings or yelpings” heard after nightfall and just before dawn in the winter.  The yelpings may explain why the sounds were often conflated with the legend of “Gabriel’s Hounds”. Ratcliffe remarks how it was said that the cries:

“were the spirits of the dead unsaved, with whom the angel Gabriel was hunting other and newer spirits, and that the cries were uttered as the lash of the angel’s whip urged them along.” (4)

In a later letter, Ratcliffe fleshes out this folktale with more chilling details, stating that Gabriel’s Hounds were said to roam the sky with their owner, who galloped “on a snorting black horse through the air just above the tops of the trees.” The rider, his horse, and the large black dog who led this supernatural pack were said to have eyes which “flamed with fire”. According to this version of the story, the phantom rider was in life a squire who rode with his hounds on a Sunday, and drove them to the door of a local church as members of the congregation were passing in. For this, “he was condemned ever afterwards to ride abroad upon wild, stormy nights.” (5)

Ratcliffe recalls how as a child growing up in a Derbyshire village he observed the terrifying effect such sounds had on the locals. He notes how they became frightened when they heard the Whistler’s cries, and did not appear to know what the “real cause” might be. Upon hearing these cries townsfolk would apparently “hurriedly disperse to their homes,” and the author notes that “some of the most ignorant crossed themselves, their faces blanched with fear,” it being locally understood that the Whistlers foretold “bad luck or death,” to someone nearby. (6)

As eager as they were to depict the more ghoulish and supernatural elements featured in stories of the Seven Whistlers, contemporary authors were also inclined to publish natural explanations for the phenomenon. The cries of passing flocks of birds were most often cited as the culprits, such as curlews, widgeons and plovers. (7) An author for the Royal Cornwall Gazette, however, notes a counterargument made by a mining trade publication. This interpretation suggests a natural correlation between the arrival of the Whistlers, and subsequent mining disasters, suggesting that the sounds were caused by “the escape of imprisoned gases in the sudden tightening of atmospheric pressure which favours colliery explosions.” (8)

Belief in the Seven Whistlers was not confined to the Warwickshire area but was also attributed to other neighbouring counties, particularly Worcestershire and Leicestershire, and the British Midlands more generally. (9) The Leed’s Times relates similar narratives concerning the Seven Whistlers originating in Portugal, as “terrible but mysterious beings” thought to be the ghosts of unbaptised children. (10) While tales of the Seven Whistlers were frequently situated within a mining context, these stories were apparently shared between professions, as sailors and railway navvies were also reported to have feared their cries. (11)

In the days leading up to the miner’s strike in 1874, two tragic accidents at the Bedworth Charity Colliery were reported as being presaged by nocturnal sounds. On Wednesday 16th September at 5am at least three miners were killed and several others injured when the “tubs” which they used to descend into the workings of the mine were involved in a “violent collision.” (12) A few days later on Saturday 19th September, an 18 year old miner suffocated in the workings after being buried by a quantity of falling earth. (13)

The strikes which followed these tragic accidents at the Charity Colliery immediately prompted a flurry of reports in the press locally and nationally. The day after the strike, the Sheffield Daily Telegraph stated that local colliers had given way to “a superstition which has long prevailed amongst their class,” also noting that recent accidents at the colliery seemed to have “augmented…this superstitious belief” in the Seven Whistlers. (14) The Belfast News-Letter remarked on the fact that the “odd commotion” did not apparently “arise from any vexed question of wages, or hours of labour,” but instead was the result of ”superstitious” miners being frightened off by reports of ominous sounds occurring before accidents in the mine. (15)

These previous accidents suggest that Bedworth miners’ ‘superstitious’ motivations for striking were not just arbitrary excuses, but may instead have been a way of expressing concerns over the hazardous nature of their work. In spite of this, they seemed to have received little sympathy. A report in the Huddersfield Chronicle painted the miners in a negative light, depicting them as men who “actually court death,” in their profession, and describing how they were seen during the strike to have “idled away the day in the streets.” (16) The Ipswich Journal reported that, “several of the employers intend to prosecute the men for neglect of work,” and that a number of them had already been discharged. (17) The Belfast News-Letter, however, did publish an attempt to empathise with the miners’ position, which stated: “It is natural to laugh at the superstitions of other folks, and to abide very earnestly by our own.” (18)

As explored here, the mutable and multi-faceted nature of the Seven Whistlers trope allowed it to serve a variety of purposes. More than merely an entertaining fireside story in the nineteenth century, the myth was evidentially deployed for political and practical purposes too. The plight of the striking Bedworth colliers serves as a reminder that folklore’s allegorical potential is often what ensures the longevity of stories. Such myths and legends encapsulate a variety of lessons and warnings with the power to incite rebellion against, or to reinforce, complex and entrenched social norms of identity and behaviour.

(16) “Opinions of the London Papers on the Questions of the Day,” Huddersfield Chronicle, 1 October 1874, p. 4. tinyurl.galegroup.com/tinyurl/3FuDWX.

Eilís Phillips is a PhD student and part-time lecturer in History at the University of Portsmouth. Her research currently focuses on nineteenth-century monster folklore within the context of popular protest in Britain. Eilís’ interests include all aspects of the monstrous and the magical, with specific focus on monster narratives concerning nature and the environment. Prior to her life at Portsmouth, Eilís worked as a professional bass player and singer-songwriter in Northern Ireland. Read more of Eilís’ work on at http://porttowns.port.ac.uk/dead-men-telling-tales and follow her on Twitter.