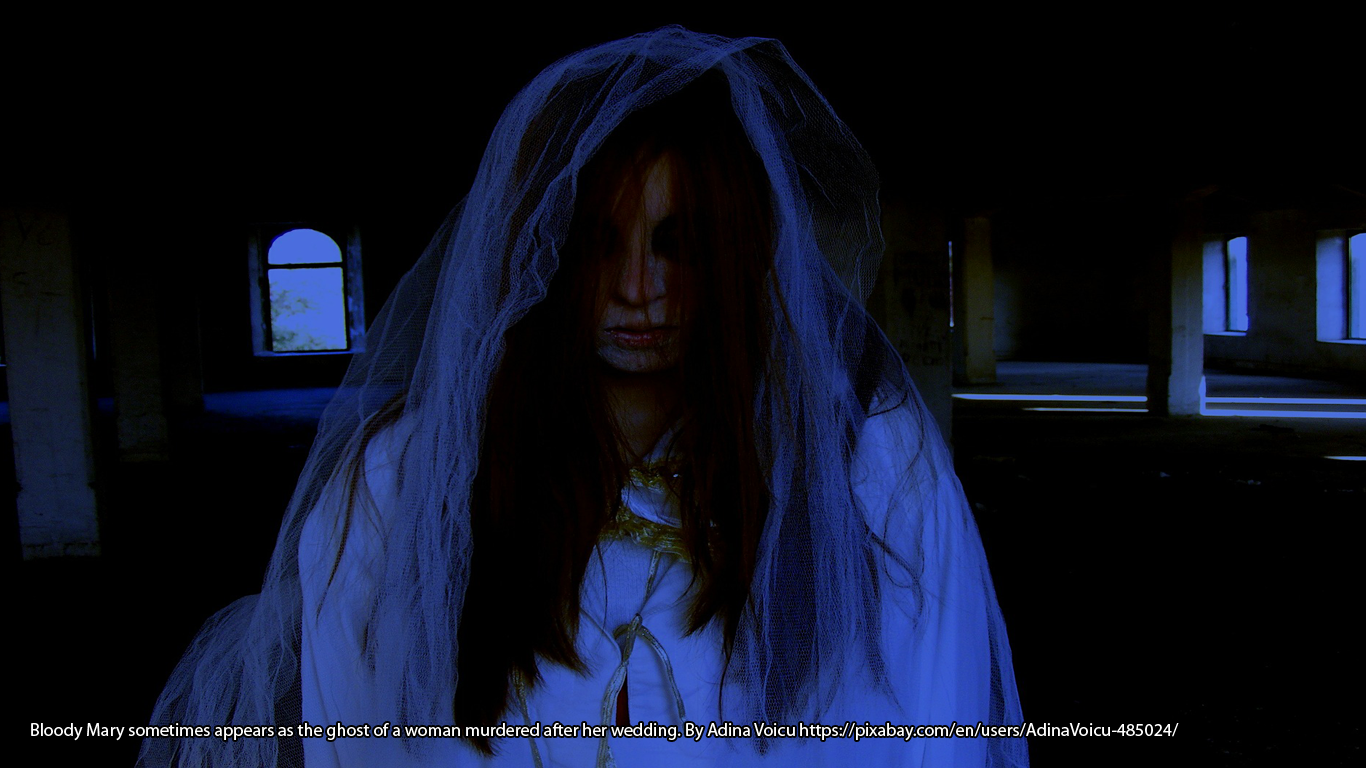 Bloody Mary is a scary urban legend that has been told for decades, but what might psychology tell us about its appeal and origins? Typically the story involves a young woman performing a ritual before a mirror. As a result of the ritual, a frightening, supernatural figure appears and often inflicts violence upon her. Bloody Mary legends are found across the world, with similar variations being found in North America, Europe and Asia. It has also found its way into popular culture, being the focus of horror films such as Urban Legends: Bloody Mary and The Legend of Bloody Mary and a key influence on the film Candyman.

Bloody Mary is thought to have evolved from much older mirror divination rituals. In a footnote to his 1786 poem Halloween, Robert Burns described a mirror ritual used in Britain for the purpose of a person (typically a woman) seeing the face of their future spouse. This continued in European folklore up to the 20th century, with Halloween greetings cards being produced with pictures of this ritual. The results of the ritual could, however, be horrific. It was said that if the woman was destined to die unmarried she would see the face of the Grim Reaper reflected in the mirror. It was also said during the 19th century that if you stared into a mirror for too long the devil would appear. It was not until the 1970s, however, that examples of Bloody Mary legends were first published in print. The first examples of ‘Mary Worth’ legends were published in an anthology of American children’s folklore in 1976 and the first academic writing on the subject was by Janet Longlois in 1978. As with any oral tradition, Bloody Mary legends are likely to have existed for many years before they were first published, however, it is argued that the current form of Bloody Mary legend originated in the USA after WWII.

The legends themselves can be separated into three parts: a back-story for the ghost, the ritual, and the result of the summoning. There is a wide range of variation in these elements, even when just looking at Western, English language versions.  Most frequently the supernatural entity is a ghost named Mary, or Bloody Mary. Other variations include Mary Worth, Mary Whales and Black Agnes. She is sometimes linked to the historical figures of Mary Queen of Scots or Queen Mary I of England and Ireland (who was nicknamed Bloody Mary by Protestants in the 16th century) or local folkloric figures such as the Bell Witch, a regional variation specific to Tennessee, USA. Her back-story often involves being the victim of violence, such as being the ghost of a woman executed for witchcraft, a female student murdered by teachers or a beautiful woman who was disfigured. She is also sometimes depicted as the ghost of a woman whose children were murdered, occasionally with a direct link to La Llorona, the weeping woman of Hispanic folklore.

At its most basic the ritual involves reciting a summoning phrase, often the ghost’s name repeated three times, in front of a mirror in a dimly lit room. The phrase sometimes relates to the back-story, for example, “Bloody Mary, I killed your baby” links to the back-story of Bloody Mary being the ghost of a mother whose children were murdered. The ritual can also involve more complex elements such as lighting candles, turning around, throwing water over the mirror or flushing a toilet. Means of protection or escape are sometimes offered, such as turning on a light or using a protective ring of salt. The summoning is typically said to result in violent injury or death. This can range from finger nail scratches on the body or face, to eyes being scratched out or decapitation. Others have the summoner tested with holding the ghost’s baby, if it cries they receive a violent death, if not they are saved.

But why is Bloody Mary or similar supernatural tales so appealing? Cognitive anthropologists have suggested that some of the appeal of supernatural stories can be explained by a psychological bias in humans for information which is “minimally counter-intuitive”. Pascal Boyer argued that people hold intuitive assumptions about how the world works, referred to as ‘folk physics’ and ‘folk biology’, i.e. we assume that heavy items will fall to the ground, or that solids cannot pass through other solids, or that animals need food to live and plants cannot talk. Concepts which break these folk assumptions are counterintuitive and, importantly, a balance between a minority of counterintuitive and a majority of intuitive concepts is more memorable and more likely to be passed on to others, hence minimally counter-intuitive. A number of traditional folktales, myths and legends support this: they have only a small number of supernatural elements, such as a talking wolf, embedded in a story of normal, everyday events, such as visiting grandma. This is also likely to be the case with contemporary supernatural folklore and is certainly the case with Bloody Mary, with a normal everyday setting such as a bathroom being interrupted by a counterintuitive supernatural element, such as a murderous ghost. My own research examining Bloody Mary legends found that the vast majority contained one to three counterintuitive concepts, a result which closely matches similar studies using traditional folklore such as Grimm’s fairy tales.

Of particular relevance to the Bloody Mary legend, is a perceptual illusion discovered by psychologist Giovanni Caputo in 2010. Caputo found that staring at your own reflection in a dimly lit room results in the perception of strange faces, often including monstrous beings, archetypal faces such as babies or old women or the faces of deceased relatives. Caputo suggests that this ‘strange-face in the mirror’ illusion is caused by dim light producing fluctuations in the stability of the perceived definition of the face, which is then over-interpreted as another person by our cognitive system for face recognition. The rituals for summoning Bloody Mary (as well as much older mirror divination) consistently require the person to look into a mirror in a dimly lit room. It is easy to imagine that when primed with a scary story, the strange-face illusion could produce some genuinely terrifying perceptual effects.

Whatever the historical or psychological origins of the Bloody Mary legend, the story has survived for decades across the world and persists to this day. Do you dare call on her this Halloween?

Barrett, J.L., & Nyhof, M.A. (2001). Spreading of non-natural concepts: The role of intuitive conceptual structures in memory and transmission of cultural materials. Journal of Cognition and Culture, 1, 69-100.

Hutton, R. (2001). Stations of the Sun: A History of the Ritual Year in Britain. Oxford: Oxford University Press.

Joseph Stubbersfield is an honorary research fellow in the Anthropology Department of Durham University, UK. He completed his PhD at Durham, investigating cognitive biases in the cultural evolution and transmission of urban legends, before working on a project examining the transmission of moral information in the School of Biology at St. Andrews University and returning to Durham for a project examining health-related conspiracy theories in the UK and Sri Lanka. Visit Joseph’s website, or follow him on Twitter.